In Hangry Bunnies from Mars you play as a cloned super-soldier, sent into the streets of a vibrant, futuristic Los Angeles to eradicate the invasion of alien bunny monsters with a massive gun in each hand, which can transform between three different forms. There are numerous different enemies, which storm you in massive armies that you must mow down. The game features dynamic difficulty that adjusts to the player’s skill, and it includes competitive leaderboards. 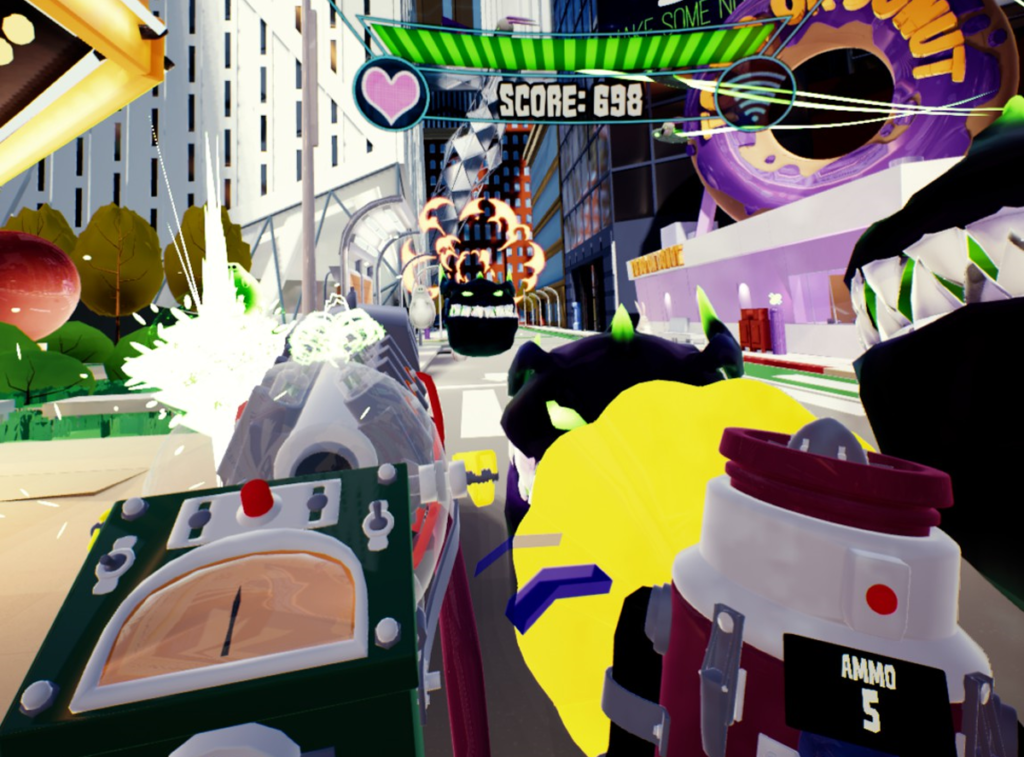 Squeezing your controller’s grips causes your gun to transform into another one: the transformations are intricate, mechanized, and unbelievably cool. You start out with two rapid fire, semi-auto pistols that deal immense damage. These then transform into two energy cannons, that deal huge damage with full-auto, but slow-firing and slow-travelling bullets. Lastly, these transform into a pair of weapons where you can pull enemies towards your left hand and consume them, turning them into ammunition for your right-handed weapon, a grenade launcher. There aren’t quite as many weapons as I’d prefer, but this isn’t a huge problem. What is a problem, however, is that the pistols which you start off with are not only the best weapons, but the other two are both weak by comparison. When there are only 3 weapons, and you actually have to earn the latter two, it’s a huge problem for the game’s pacing when the starting weapon is the best. Additionally, you’re given two abilities: a bunny repellant, which deploys an area-of-effect defensive shield, and a “gravity gun:” not so aptly named, it doesn’t deal projectile damage although it is very effective in dispersing large crowds. Lastly, your guns have an “overclocking” meter: long killstreaks result in your weapons quickly gaining damage, which increases your immediate pressure to blast bunnies.

Easily the best thing about Hangry Bunnies is its dynamic difficulty system. After getting warmed up with some introductory waves, the game kept pushing my abilities to their absolute limit, never taking a second off of blasting alien bunnies. I frantically shot in every direction, just barely pushing off the horde, and dying only when I could admit that it was getting too tough. No matter how skilled the player, they will often be fighting to the peak of their ability. This keeps it an exciting challenge for all players, and prevents any chance of dying unfairly. In addition to the dynamic difficulty, there’s a challenge setting in the main menu, which bolsters your score in exchange for lower survivability. 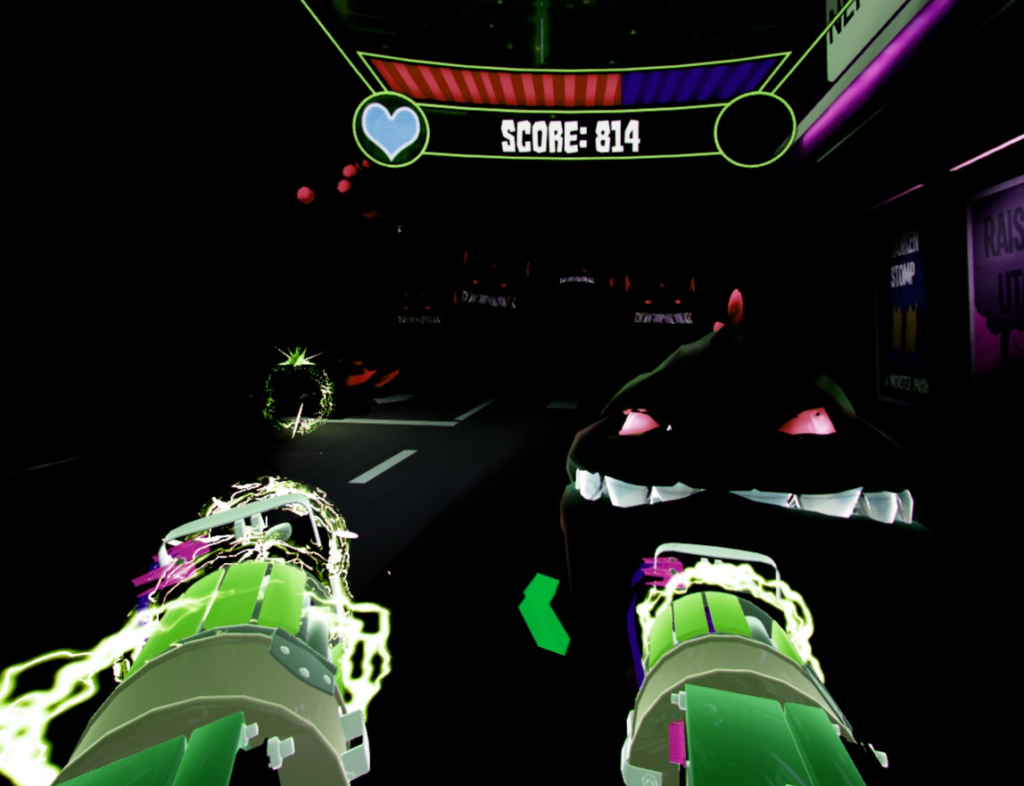 Some enemies, upon getting too close, can blur your vision by surrounding you in a shroud of darkness

In spite of the complex difficulty algorithms, you’re always given a ton of health. This is because unlike most action games, which define a challenge as the difficulty you’ll have fighting a given enemy, Hangry Bunnies defines its difficulty by the size and palpability of the alien hordes attacking you. You’re able to endlessly plow them down, and no single standard enemy will ever pose even a slight threat. However, the game’s dynamic difficulty rears its head once it starts sending you ever-growing swarms. At times, I felt like the actual enemy I was fighting wasn’t even the alien bunnies, but rather the sheer size of their hordes being airdropped in via cliche UFOs. There are also boss bunnies, which work with this formula well, as they are have more health than entire hordes combined, and will swallow you whole if they get too close. Having to choose targets between the behemoth lumbering toward you and the swarm behind you is an adrenaline-filled gameplay approach.

As such, there are very few other games I’ve played that succeed at making you feel like a “one-man army.” The only other franchise that I believe pulls this off is the Serious Sam series. The overwhelming armadas of bunnies which close in on you, before devouring you like a swarm of piranhas, feels intense, cinematic, and panic-inducing. Because of the game’s difficulty, once getting past a few waves, you should be able to just narrowly succeed in any stressful situation. This constant uncertainty of your life or death enables the game to feel fresh and exciting every time you play, even once you’ve become fully familiar with it.

Simultaneously in front and behind me- where should I be shooting?

Unfortunately, this degree of familiarity does not take very long to achieve. This is the game’s biggest downfall; after playing three long rounds (45 minutes), I experienced everything there is in the game. That’s because the formula for Hangry Bunnies is uniquely similar to games like “Space Pirate Trainer.” Hangry Bunnies has a single, well designed map, and only a select few weapons. Fighting the endless hordes, your only real objective is to survive as long as possible and get a maximum possible high score. Several bonus point opportunities are available to help increase this score, such as target-practice bunnies launching out of a huge donut, or each UFO sending a small swarm of harmless drones that can award a large bonus for killing all of them quickly. These bonuses mix up the gameplay, as they’re more valuable for the objective (getting a high score) than killing standard enemies, but are harmless and fleeting, which leads to some fun target prioritization choices.  Unfortunately, both feel repetitive, and worse- getting the latter drone squad bonus is indicated by the “deal with it” sunglasses meme appearing in the center of your vision. This type of meme usage is unhumorous and aggravating.

In spite of this impression, Hangry Bunnies is actually kinda funny. There is a mad scientist and a stereotypical Russian who give you encouragement over the radio, their dialogue containing original jokes which made me chuckle out loud; a pleasant surprise, after seeing that god-forsaken sunglasses meme on my screen so many times. The game also boasts an epic, guitar riff-filled soundtrack, which blends into the game well and serves as a reminder to how badass you are.

The graphics and atmosphere only add to Hangry Bunnies. Although future L.A. is the only environment available, it looks stunning. Lighting and textures feel properly cartoony, and the colors are bright and popping. Animations look slimey and trippy, fitting with the “gross alien” theme. In game, these polished visuals look good and run very well. Strangely, though, the main menu lags like crazy- although this evidently isn’t a problem for the actual gameplay. The user interface generally works fine and suffers from no notable issues, though it would be nice to have graphics options beyond the present “setting: low or high graphics?” 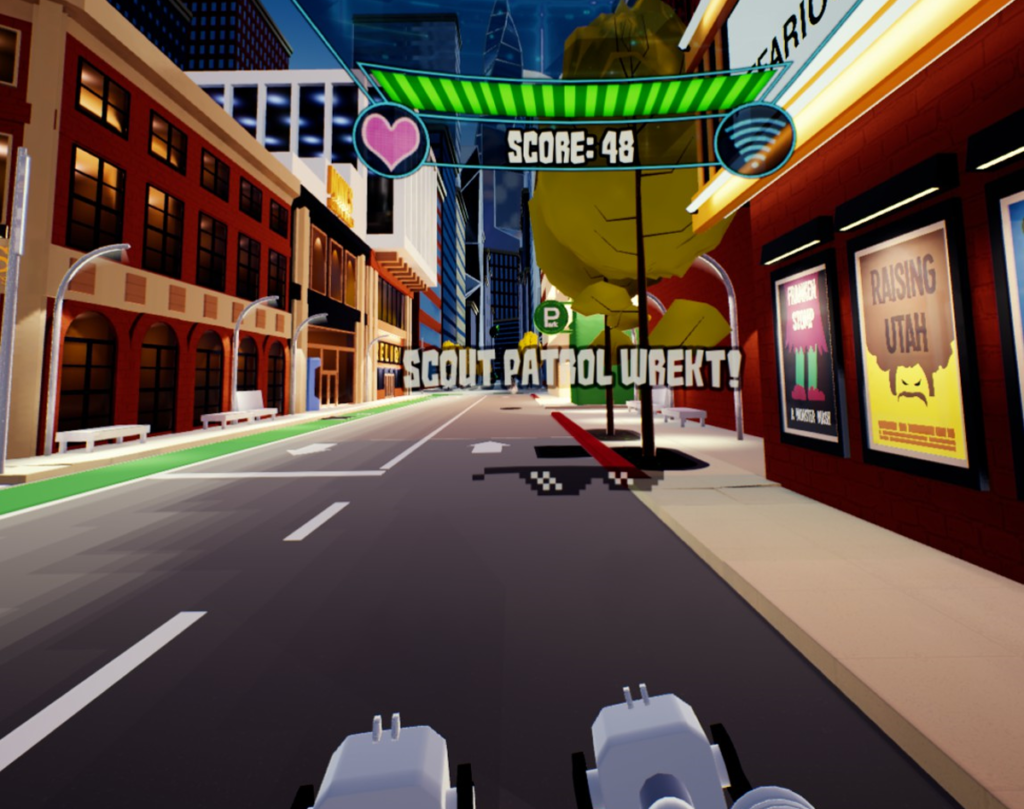 This game usually has professional integrity, but come on…cool it on the outdated memes.

Unfortunately, there is one major design flaw: there’s no movement. It’s a stationary, standing-still shooter; like Space Pirate Trainer, but without any of the active dodging or ducking that made up SPT’s movement enjoyable. Because of this, combat feels less like a first-person shooter, and more like a tower-defense game where you’re both the only tower and the defense point. Although the actual shooting feels great, the lack of any physical activity- or in-game movement- is a huge loss, since the map looks like it’d be perfect for open exploration while blasting bunnies.

What would I pay? If you are looking for a VR wave shooter than $15 is alright for this. The game is profoundly fun, unique, and high-quality, but has a depressingly low content point. So, unless you’re a high-score seeking arcade gamer, who gets more enjoyment out of climbing leaderboards than prolonged campaigns, you may want to wait for a sale, but what is presented is still undeniably top quality!

Studio 229 provided theVRgrid.com with a review copy of this game and, regardless of this review, we thank them for that!