I loves me a good vr puzzle game as the tactile nature of Virtual reality just makes pulling levers and spinning wheels all the more fun because I can (sort of) actually touch those things!  Ryte is the latest puzzler to catch my eye as I’ve had a fascination with the fabled lost city of Atlantis for most of my life.  In Ryte, you are no more than a tourist from the future who travels back in time to said city to see what exactly befell it.  Of course, things quickly go sideways, and you are trapped in the past and must try and survive using only your wits as the city’s dire fate looms only a few hours away. 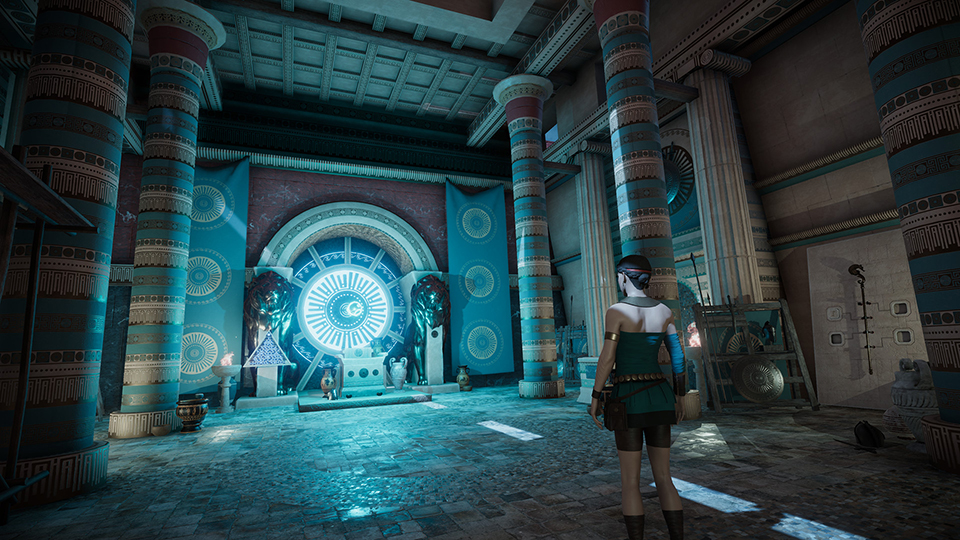 Every room offers up its’ own puzzles.

This is a first-person puzzler and controls like many similar titles with you using 2-hands to grab and manipulate items you’ll find on your journey.  Unfortunately, click-turning and teleportation are the only comfort options available, no blinders though, making for a title that will require a little bit of room scale as well as you try and get close to the stuff you need to touch.  While the lacking comfort options take much away from the enjoyment of the game, throughout the campaign you are given some magical bracelets that allow you to push and pull objects within your sight line, allowing for easier puzzle solving as you won’t be frantically teleporting around the map trying move items from 1 place to another.  The puzzles come in a large variety, some as simple as finding missing pieces to a larger puzzle with others requiring a decent little bit of brain power as you’ll have to analyze constellations, spin dials and decipher clues to unlock chests.  Trapped in the body of an Atlantean or 2, you’ll get caught up in a plot that will require you to make a few choices that could change the game’s outcome with most of the story playing in a linear fashion.  There are seas shells hidden throughout the game that act as audio logs when brought to your ear and flesh out some of the story from events around Atlantis before it’s tragic end. 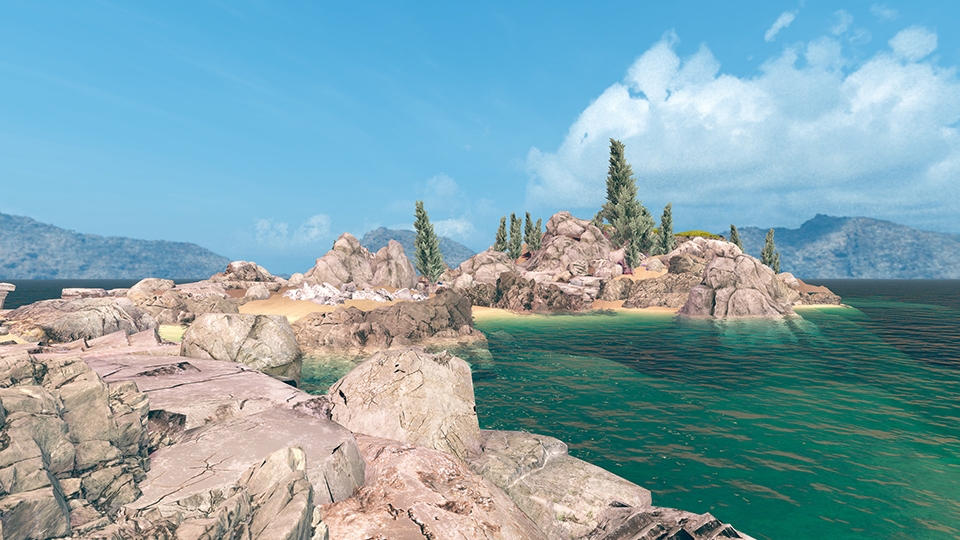 Ryte is initially a fantastic looking game with the opening tutorial and 1st stage impressing me with the some highly detailed textures and fantastic moon lit city and ocean that look nothing short of amazing.  Unfortunately, that quality quickly falls away and soon you are left wandering the streets and buildings in Atlantis that look dull, flat and dated.  There are some decent lighting effects at play, though are underused with most of the game looking like a PC game from the early 2000’s.  Character models move stiffly and don’t have a ton of detail with much of the environments after those 1st 2 stages just looking mediocre at best.  I don’t want to say this looks terrible, as there is some nice details in some the Atlantean architecture, but upon close inspection, most items don’t look great.  You’ll visit a few different locales from a seaside fish market, temple, blacksmith shop, city streets and few more crazy settings but none of them ever really looked as good as those first few stages.  By no means are the visuals awful, they just aren’t that good and highlight that this is smaller VR title from a smaller dev team so it’s best to temper expectations for this one.

Sound wise, this doesn’t fair much better than the visuals.  The soundtrack is alright and fits the game nicely thanks to the orchestral score and when the action ramps up during a few of the cut scenes, it is quite dramatic.  3D audio is unfortunately absent when dealing with anything in the game so sound effects always sound too close and all around you, as does anyone talking at you which was just off putting.  On top of that is the voice acting, which leaves much to be desired.  Your main companion does her job nicely, but everyone else in the game just has lacking performances that really hurt the story. 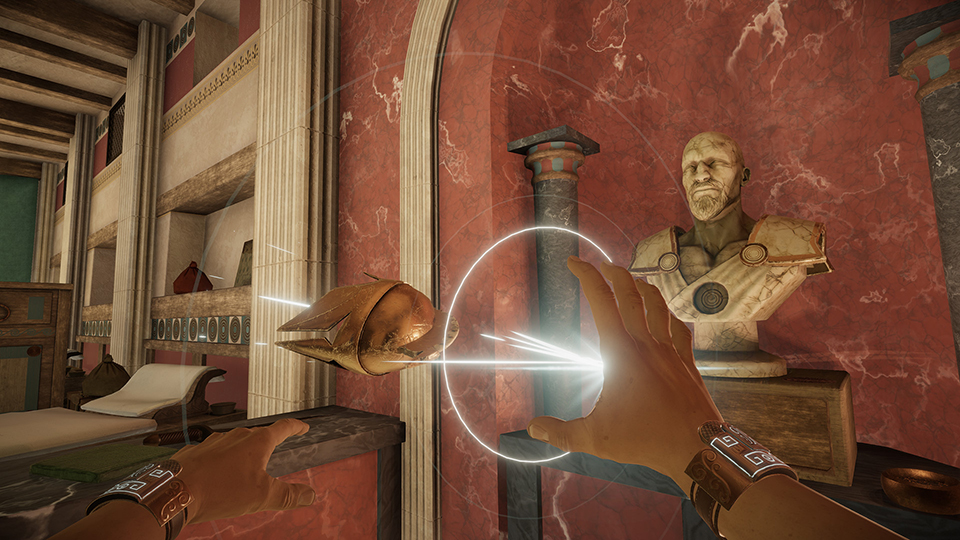 Magic bracelets let you summon items to your hands so you don’t have to teleport as much!

The puzzles are where this shines with some fun and clever obstacles that tested my wits and even introduced some mechanics that I greatly enjoyed like when you need to make a key by adding found shapes to it to fit into a specific outline.   For every fun puzzle though it seems like there are just as many obtuse ones that just left me confused as the explanations for their solutions are not readily apparent.  I don’t mean they are hard, but rather I just had no idea what I was supposed to do because the mechanics weren’t clear causing for some trial-and-error frustrations until I figured out what the game was asking of me or I just hit buttons until I stumbled across the answer.  This only occurred 2 or 3 times during the game, but when I felt like I was fighting convoluted game design, it got a little frustrating.  Trial and error did get me through but when combined with the lacklustre visuals, poor story and shoddy performances, the few good puzzles don’t really balance out the annoyance I had when playing through the story.  After completing the story, you are told which choices you made that affected the outcome of the story though never once on my 1st play did I realize I had a choice in these situations.  Even with that knowledge, I had no desire to play through any part of this 2 and half our campaign again just to see what changes as I just didn’t care about the story in here leaving little to recommend considering just how many better, similar titles are out there. 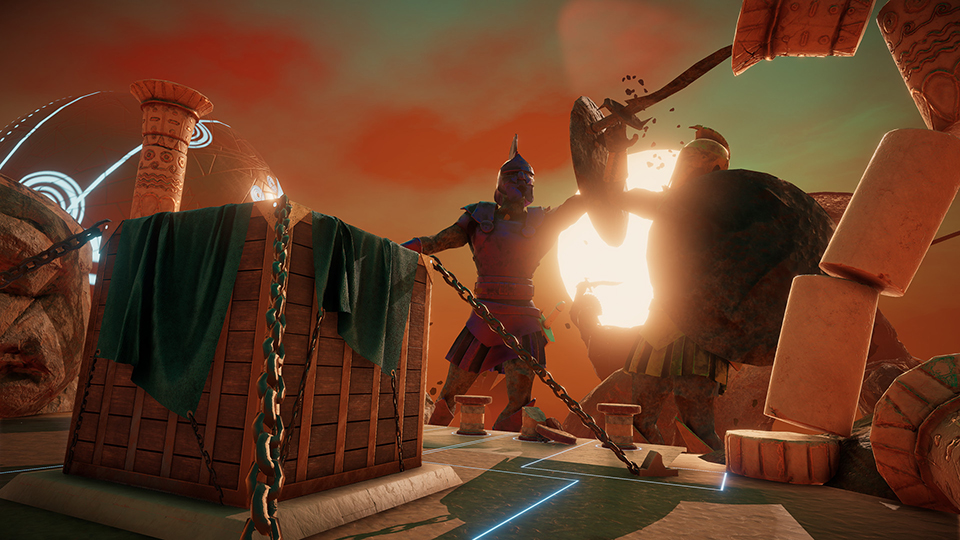 Ryte: The Eye of Atlantis isn’t terrible, but it’s not that good either and while I did enjoy some of the puzzles in here and the opening stage did impress, what follows is game lacking anything engaging and comes off as dated and bland.  That combined with heavily restrictive comfort options make it hard to recommend this to anyone except for those that just can’t get enough puzzles.

What would I pay? This is $20 US on steam which is hefty given the overall quality in here.  At most, I’d say this is $10 as the good in here is far outweighed by the mediocre and while some of the puzzles are fun and challenging, just as many are tame and sometimes just confusing.

Orichalcum Pictures provided The VR Grid with a press code for this title and, regardless of this review, we thank them for that!