For those looking for any sort of narrative, look elsewhere as this is all about setup and execution with you choosing from 1 of 5 warrior classes and duking it out against either AI controlled foes of those same classes, minus the final boss, or playing online against other people.  Those 5 classes are the Samurai, barbarian, Knight, Duelist & Persian with each of them equipped with swords befitting their respective combat era’s.  The Knight has a sword & shield, The barbarian has a claymore, The Samurai; a Katana and smaller blades, the duelist has 2 fencing swords & the Persian is armed with 2 scimitars.  In single player mode, you choose your combatant and proceed to face all 5 AI controlled warriors and must defeat them twice with the final 2 combatants taking 3 or more downs to defeat.  You win by depleting their health while you defend against there attacks and if you die even once, you lose that bout.  When playing online, each of you has 3 lives and must fight to the death in private, public or ranked matches that score you on a few factors and place somewhere on the global leaderboards based upon your performance.  As you fight an ELO score is applied to you meaning you should be matched with players at a similar level.  That is all well and good though I think for many, how the swordplay works here will be divisive as unlike other physics driven brawlers like Swordsman VR or Blade & Sorcery, this one is all about finesse. 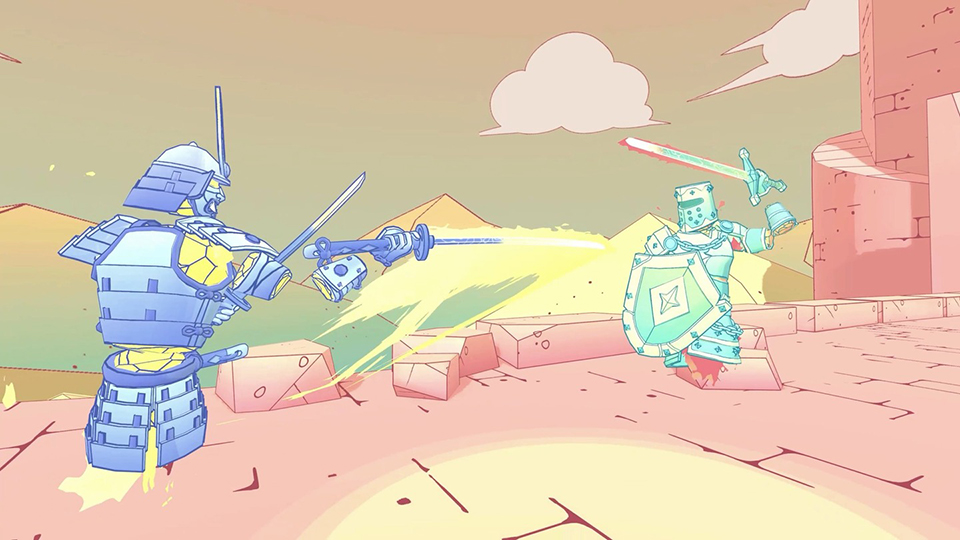 What I mean by finesse is that this plays much more like a fencing game where once either opponent connects with either blades or bodies, positions are reset, and you must prepare to engage once more.  Both players start away from each other and automatically move closer together, which is a bit odd at first as you appear to be stationary while your opponent slowly moves towards you, and they see the same thing.  You can move around in the real world, ducking, weaving, spinning and whatever else you want to do but need to be aware that you are always slowly moving closer to your opponent and cannot deviate too far from your designated path as the game keeps you in the play area.  The key to winning combat is to strike your foe directly or make contact with their blade, cutting at it like you would a tree in that the further towards the hilt you touch, the more health is removed from the enemies health bar though depending upon where your swords connect and how hard each of you swing, you could also suffer a loss of health turning this into a game of ‘slap hands’ to see who can react quicker and more accurately.  Of course, you can land singular death blows should a strike not be blocked but this happens rarely thanks to blocking swings with your main sword, secondary weapons & even armour.  Once your health has been fully drained and your weapon broken, you will be left defenceless as your opponent slowly moves in for the killing blow. 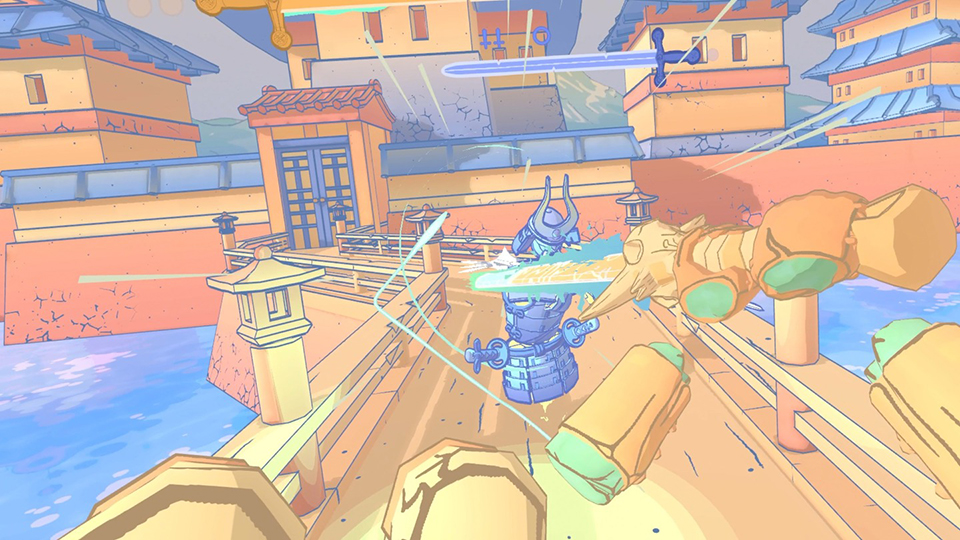 Always be aware of where sword is!

Unfortunately, the combat isn’t that satisfying & doesn’t always work as it should with blades often passing through each other. The focus is clearly on the online multiplayer though at the time of launch, there is no in-game voice chat which makes those PvP battles substantially less engaging than they should as 2 players face off in silence and while that is supposed be addressed in a patch releasing in less than a week, it should have been in here at launch.  Also included in that patch is an “improved Training mode, in-game leaderboards for online ranked mode, a new arena for the Persian fighter, and more” and given that update is only releasing in a few days, I can’t help but feel like the release for this should have been pushed back. 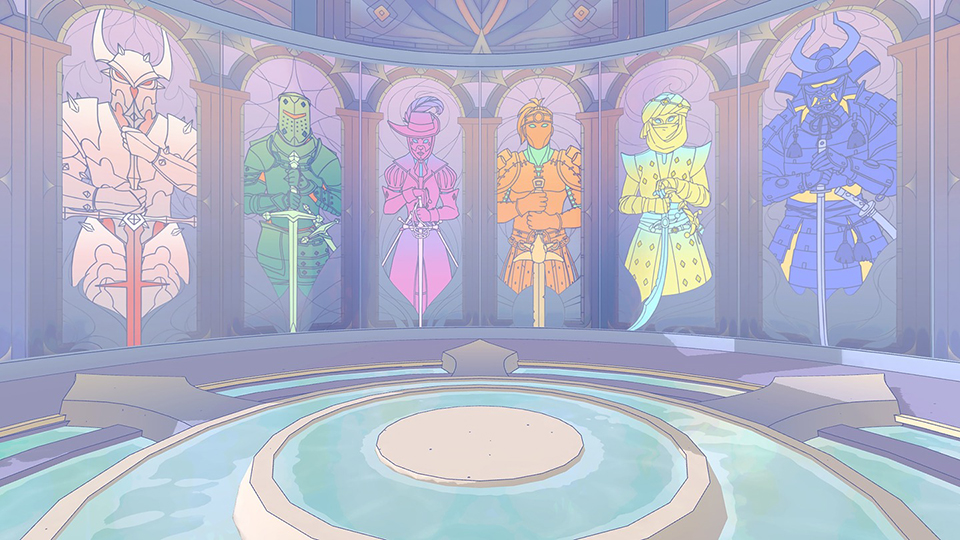 It’s important to learn how each class fights.

Each class has 1 main weapon, which acts as your health bar and when hit, will regenerate slowly as long as you have health remaining though may not fully form should you take a heavy blow.  All of the characters minus the Barbarian have a secondary weapon or shield which can deal out damage if it’s a blade and while they can be destroyed, will not adversely affect your overall health with the shield held by the knight absorbing blows but shrinking in size with each hit.  Regardless of the weapon, none of them have any weight attached to them so you can swing as fast or slow as you want without any sense of realism.  Furthermore is the longer blade of the barbarian which seems to offer a substantial, unfair advantage over other classes.  Each fighter also has special abilities and attacks that can deal out more damage or offer defences from your attacker and require you to hold your weapon in a specific position or perform a series of weapon motions to activate an ability.  These include a dramatically stronger hit, an automatic regeneration of your weapon (not your health) or a full body barrier which can can only be broken by that strong attack or when it runs out.  These add to the strategy involved as using them at the right time could spell victory and could easily be wasted with a poor or missed attacks though on a few occasions, these powers wouldn’t activate even though I was performing the proper motions.   While every warrior has the same powers, each must make different motions based upon their combat style to activate these buffs which can be practiced in the dojo, where an AI instructor will remind you which motions activate which power.  All of this makes for a combat system that feels mostly fair against other players but less so against the AI who get multiple lives to defeat you.  You can replay a lost fight as many times as you want though should you go the dojo to remind yourself how to perform abilities, when you head back to the game, you must start at the first fighter you faced, even you have already made it to the final boss, the Tyrant. 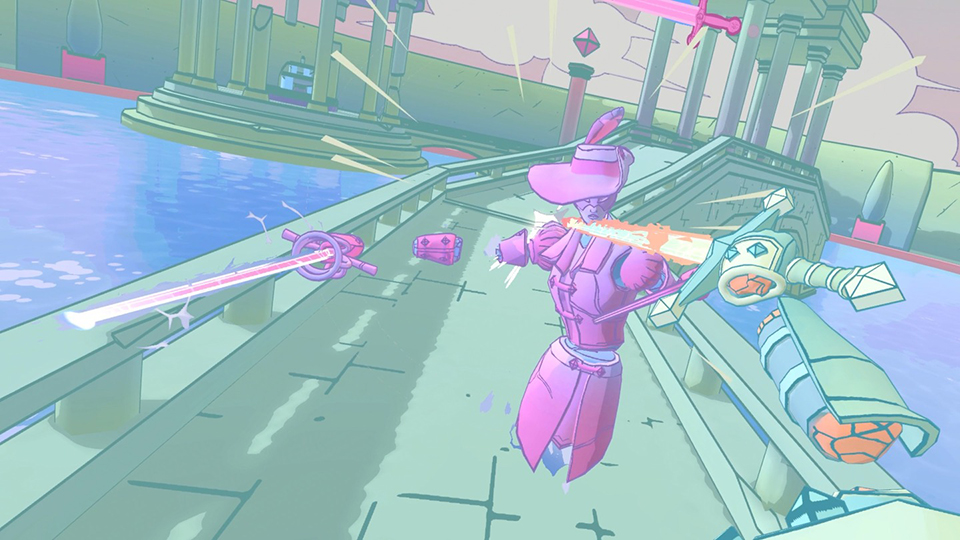 Each class have a different weapon set.

Trebuchet’s previous title, Winds & Leaves, was one I greatly enjoyed with a standout being the unique visual style used and while this looks different, opting for a cell shaded and stylized sketch-book type look, it does undeniably pop in the headset.  Each warrior looks to be made of stone, with torso, arms and heads (no legs here) all floating where you would expect them too and extending to match that players motions.  Each of the 6 warriors has a unique look and arena and while these stages are largely static, the visuals had me longing for a larger game that utilizes the style which is a good thing as even playing in the same stage after multiple deaths, I still enjoyed taking in my surroundings.  Fighter avatars are also fairly detailed with some slick effects used when your sword reforms, contact is made or when the final blow is swung giving this smaller game some nice flare. I will note that on a few occasions, I seemed to have spawned with the scale being off, with my body having smaller arms & hands though this seemed to reset after playing for a bit.

Accompanying that flare is some decent audio with every sword connection, armour impact and huge blow delivering appropriate sound effects.  A melodic and medieval score accompanies each battle and fits wonderfully with the overall aesthetic so while what’s here may be small in scale, I can’t deny the polish in the overall presentation. 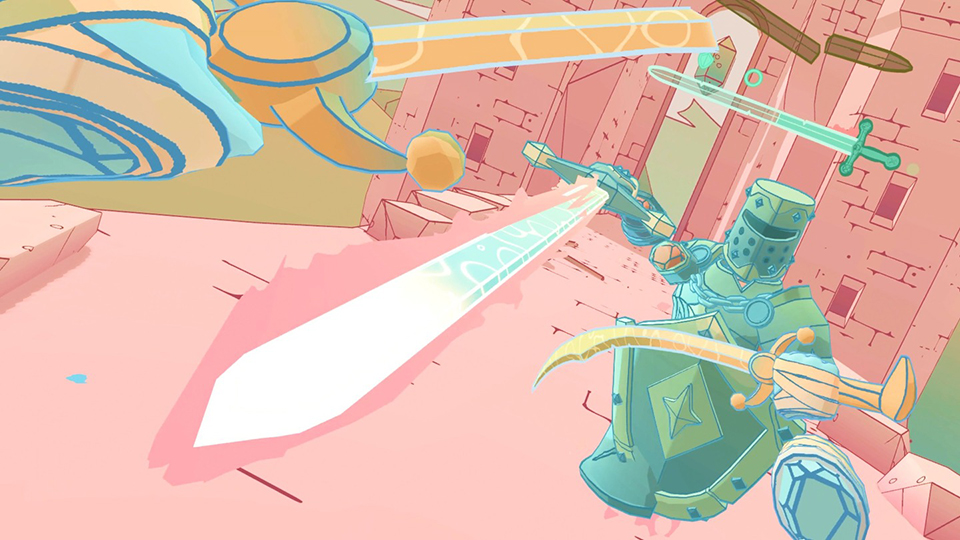 Death can come at any moment if you aren’t ready.

What this all adds up to is a mundane PvP experience where battles feel like a slow game of chicken and an irksome single player game where defeat gets incredibly frustrating while victories feel more like strokes of luck than proper skill. Even with those updates coming, for myself, there just isn’t enough game here to keep me coming back for more and while I appreciate the new take on the VR fighting genre, I just don’t think it works well enough as I found the entire experience to rather dull.   The slower, almost turn-based combat and lack of tactile feedback just wasn’t satisfying as even when I felt like I was doing good, it didn’t really feel like true swordplay.  That is not Broken Edge’s fault and is a shortcoming of VR as whole, but after playing this for a few hours, I found the entire experience to be more frustration than it was worth with only fleeting moments of fun. The $10 price tag on this does place this in the budget category of VR games but even at that price, I don’t really know who this game is for and while some aspects of it are enjoyable, the entire package just feels like it misses the mark.