For those who are like “have I seen this game before?!”  you may have as the developer made a nearly identical non-VR game called Nauticrawl some 2 years ago that contains the exact same game loop as a Rogue Escape, but thanks to the wonders of VR, playing in a headset adds a level of immersion that takes this game formula to the next level.  You play as a recent escapee from an extremely oppressive society and have stumbled into a giant underwater mech and must use that to escape, the thing is, you have no idea how to even turn it on and the enemy is looking for you. 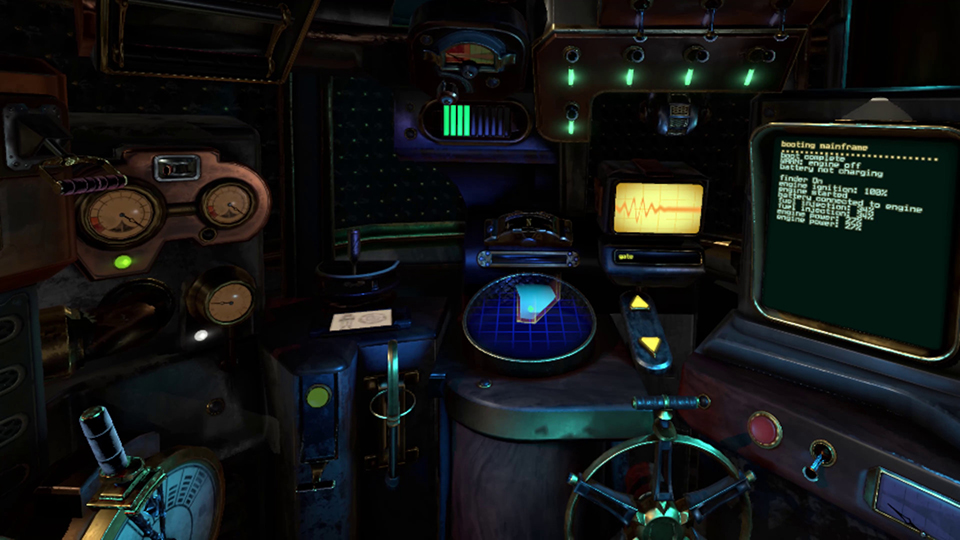 Welcome to your new home!

After a brief tutorial that still challenges you to think and take in your surroundings, you are off to the Nauticrawl and are placed before it’s many levers, buttons, pulleys and CRT screens and need to decipher how to not only turn the machine on, but master its controls as make your way out of the complex your trapped in.  You’ll need a decent room scale setup as the game does ask you to move around a fair bit as you move from one station to another though there is an in-game height adjustment option in the form of the platform you are standing on and can be raised or lowered with the thumbsticks.  A manual left behind by one of the previous pilots vaguely explains how to turn the mech on and once you figure out the controls, you’ll be on your way though make no mistake, it will take some time to not only figure out what to do but get comfortable doing it.  You can’t see outside of your vessel (at first) and must you a holographic mini map to guide your mech through the corridors careful not to hit any walls or run into turrets or sentinels that patrol the area.  While escaping is the goal, it’s not quite as simple as walking out of the nearest exit as you’ll have to perform certain tasks and find specific items that aid in your quest.  The information you need for these objectives will come in the form of communications deciphered by hacking some of the stations you’ll find in the complex.  These can be confusing at times, but always keep what they say in the back of your head as they offer key information for your survival.  The mech requires fuel, when damaged requires repairs, needs battery recharges and is always at risk of overheating so you need to keep all these things in mind on top of whatever obstacles the game throws at you next.  Everything I’ve talked about so far is just the 1st control station in the mech and once you get out of the initial stage, new stations become available, forcing you to learn the intricacies of that layout and the troubles that come with being in an entirely new environment, all from the relative “safety” of your armored, walking hunk of steel. 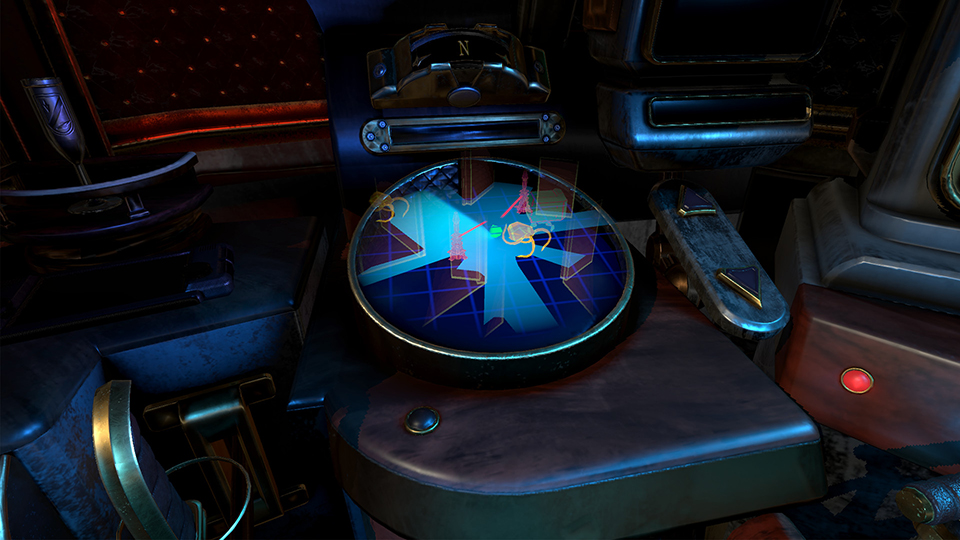 The mini-map is your only friend!

Whether you play on PC or a Quest, the game looks nearly identical which makes sense as the mech you are in is relatively small so there just isn’t a lot to render allowing for much more realistic presentation, especially when compared to other Quest titles.  Regardless, the inside of cockpit looks great with all the buttons and levers doing exactly what they are supposed to do.  When in tip top shape, there isn’t much going on inside the mech as much of the action takes place on that bare bones holo-display in front of you but take some damage and things can get crazy fast.  As stations get damaged, they may not work properly or at all, emitting steam when you try and use them or if your computers get damaged then they may display random characters making those screens much harder to read.  Later stations give you a viewing window so you can actually see what’s coming at you though these encounters are stationary as any travel in these stages is handled by a quick-travel option of sorts so while you’ll be exploring fairly large areas, because you never leave the mech, the game feels very isolating and personal and while you are performing the same actions over and over, it never felt repetitious to me as I never knew what was going to happen to me next and even my imagination did an excellent job of filling the gap that is the world outside of the mech.

Much like the visuals, the audio is also presented on a relatively small scale with almost all the game’s audio occurring in the room around you.  As you move, you’ll hear the mech groan and clunk on it’s 2 massive feet while all the other stations monitor and react to what is happening to the mech.  It’s imperative that you pay attention to every beep and noise in your cockpit because if you hear or see a blinking light, something needs your attention.  If you take damage, you’ll start to hear the slow drip of water leaking into the mech and the machines will sputter and struggle to perform as they should with the game bathed in musical silence leaving you to focus solely on survival and escape. 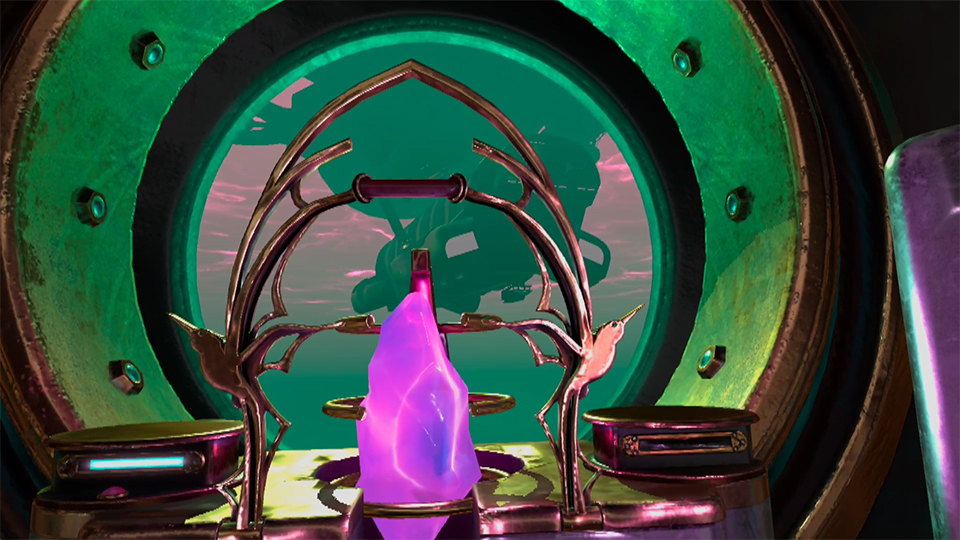 This can’t be good!

I really enjoy this game as it offers something familiar but puts a fresh coat of paint on it making it not quite an escape room, not quite an adventure and not quite puzzler, yet still harnesses elements from all those genres to make for a very engaging experience.  Just turning the mech on for the 1st time is a task unto itself but as I got more familiar with the game, controlling the mech became a breeze…at least until I unlocked the next station and had to repeat the whole ‘trial and error’ button mashing and flip switching to see what would do what.  Every discovery is its own reward though and every time I got a bit further, it only increased my drive to hop back in and try again.  With rogue-like elements at play, when you die, the next time you start you’ll play as a new fugitive and must repeat the same tasks over again, but with enemies in different places and inventory changes ensuring that each attempt is not quite the same as the last.  On one run I had so much fuel I didn’t even care if I took the “long way” to avoid all the enemies while on a separate run, fuel was so scarce every step I took felt like one step closer to death.  There are also some fun balancing mechanics to learn to make the mech more efficient like turning off any unneeded electronics and tricks to manage the weight in your inventory which once again only adds to that feeling of accomplishment when you figure out anything that aids on your journey.  The biggest knock against the game is that isolating presence in what seems like a pretty cool world to explore and while being in the mech and using my screens to get the tiniest glimpse of the world was still satisfying, I couldn’t help but wonder what the world outside of my walls looked like. 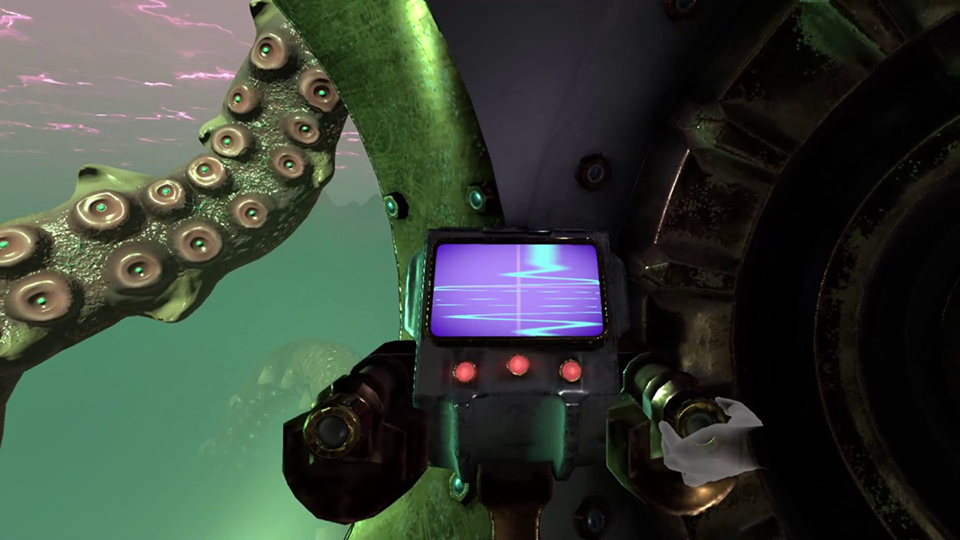 Handle the squids as fast as you can…or better yet, avoid them completely!

A Rogue Escape is a relatively simple game once you master the mech’s controls and the tasks you need to perform and getting that familiar with all of the games elements for that final run is where the fun lies in this and it is fun, but it can frustrate.   Patience is key and thankfully you can save & quit anytime you like so should frustration get the better of you, take a break and come back as the solution is always nearby, you just need to pay attention and never give up. Fans of games like I ‘Expect You to Die’ and other escape room type games should eat this up as it’s a different take on the genre that works surprisingly well!

What would I pay? I have spent hours in here figuring everything out and had a blast doing it.  Discovery is its own reward in here and if you enjoy problem solving, this throws a lot of problems at you to solve!

Armor Games Studio provided The VR Grid with a press code for this title and, regardless of this review, we thank them for that!