Battlezone. What can be said about this iconic game that hasn’t been covered already?  This is one of those games that has had fans chomping at the bit for more since it rolled into arcades in the early 80’s.  Flash forward almost 37 years and we now have our very own VR version that drops us directly into the pilot seat once more. This time we have a lot more options at our disposal, and they might have updated the graphics just a little. 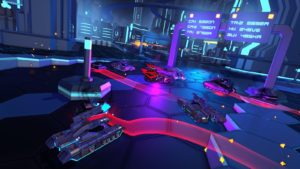 The neon wasteland sure looks clean.

Battlezone is a futuristic tank combat game where you pilot your very own Cobra across various digital wastelands. You will encounter a wide range of enemies, both land and air, and destroy the bases of an evil corporation that is waiting for you high in a volcano stronghold. Yes, a volcano stronghold. You don’t have to face this threat alone however, up to four players can play the online campaign mode at a time and, in my opinion, the only thing better than laying waste to virtual baddies in a freaking tank, is doing it with your friends.

The campaign mode consists of a short, medium, and long setting which changes the difficulty and length of the game, or more accurately the number of matches you will be playing to reach the final stage. During these matches you will be faced with a range of goals such as attacking or defending bases, elimination, convoys, or even clearing mines. I never really found myself getting tired of the variations of missions because the combat was almost always fast paced and it was generally left up to the player as to how quickly you wanted to progress. That is something that got me killed a few times as I tried my hand at a more aggressive playstyle.

Speaking of play styles, you will have your choice between three types of tanks. A high armor and low-speed tank that has heavy firepower, a middle of the road tank, or a low armor and high-speed tank with lower power weapons. Each has access to a wide range of unlockable upgrades and weapons unique to that type of tanks playstyle which kept me happy for some time as the list of unlocks is massive.  You can unlock most of these items and upgrades at various points throughout the campaign with data, the game’s version of currency, collected during gameplay.  Some items however will need to be unlocked by meeting various requirements in the game. While you can unlock and change out your equipment during a campaign, you unfortunately cannot change tank types during a campaign and that felt like a letdown each time the mission type changed. 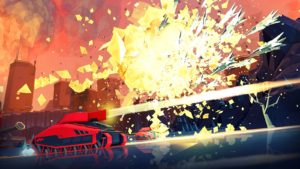 The flashy graphics are fun but not but the level design does feel repetitive.

While I would have liked to see motion controller support, I understand the decision Rebellion made when going with the gamepad. At this point a gamepad is almost intuitive with this style of gameplay and they did design this game for a wide range of hardware. Still, I do feel like some degree of interaction with the cockpit via the motion controllers would have been great, and support for players with flight sticks and throttles would have also been well received. The controllers are mappable and the PC version supports the Xbox, PS4, and Steam controller, each with a selectable preset so you can slide right into the action.

The visuals are definitely eye catching in this updated version of Battlezone. Those old wire lines are now flashy neon, almost Tron looking, backdrops but the tanks themselves still give a good nod to the classic feel of past Battlezone games. The graphics, while flashy, are not really anything spectacular but at the same time they look good and provide a stable experience in VR. I do wish that the maps had a little more variation in terrain and background just to keep things fresh in the longer campaigns as it did tend to get a little stale after awhile. I would also like to mention that Rebellion did include a classic game mode with the retail version of the game that will allow players to experience the green vector graphics art style in VR and that was a pretty awesome touch.

The audio was good quality and provided a wide range of audio cues. It is worth popping on your surround sound headphones to get the full effect of all the gratifying gunfire and destruction. The in-game music was intense and pushed the fast paced combat. You can disable it and pop on your own killing tunes, which is always a welcome option. 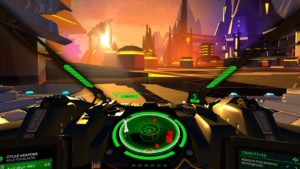 The cockpit looks cool but you don’t really interact with it.

I enjoyed blasting away in my very own Cobra once more but the overall VR experience did leave a little to be desired. While the cockpit did provide a ton of useful information, without actually interacting with it through the controls it felt like it slipped away into just another HUD that only became relevant when something started flashing. This is not to say this took away from the fun of the game but it really was a missed opportunity to make this VR title really have more of an impact with players. Of course, at the end of the day, the combat is at the center of attention and Battlezone really was a lot of fun in a co-op environment and the length of gameplay is a welcomed break from the normal couple of hours most VR experiences have been providing.

What would I pay?  At $39.99, Battlezone might seem a little high priced, but you are getting a well polished game that provides a lengthy campaign with all kinds of unlockable items and if that’s your thing then you can see the value already. With the replay value on top of this, I have no problem with the current asking price whatsoever.

Rebellion supplied theVRgrid with a review copy of this title and, regardless of our review, we thank them for that!!!