This review is for the v 1.24 version of the game and won’t hold all the ridiculous launch issues it came with against it.

The Medal of Honor Franchise has been around for more than 2 decades, capturing key moments and letting gamers revisit the heroics and tragedies from World War 2.  At its peak in popularity, it was undoubtedly the best War game series out there though has since fallen on harder times with the last few releases deviating from that era in favor of more modern shooter flare.  Above and Beyond is a return to form of sorts for the series with you playing as an OSS agent during WW2 and thus being involved in key events throughout the war with VR adding levels of immersion that few games have touched on before. 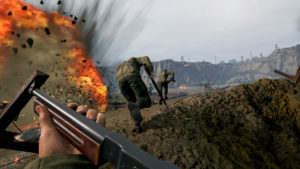 Unsurprisingly, Medal of Honor’s core shooter gameplay is like most VR FPS titles but opts for a mix between casual and simulation gunplay.  A tutorial mission breaks down all the gameplay elements with combat being at the forefront of it all.  On your hips are your pistol and ammo supply with your larger rifles being strapped over each shoulder for easy access.  Any ammo picked up is automatically placed in your ammo pouch, which will always have whatever ammo you need with the gun in hand.  Reloading will require you to expend your ammo and possibly eject a clip, grabbing at your side for the next rounds, placing them in the gun and cocking back a slide or pulling on a handle to load it.  It’s a system that works very well and I almost never ran into any issues when I needed a quick reload.  Comfort wise, you can smooth or click turn with optional blinders as well and while you can play this sitting, standing is clearly the way this was meant to be played as there is no duck button and many situations will have you exposed to enemy fire unless you crouch in real life.  Knives are available to be thrown with some auto aim involved to ensure you hit your target some of the time, though I rarely used this as I almost always had a gun handy.  Grenades are strapped to your chest and can be grabbed at any time, armed by twisting off caps or pulling the pin (with your teeth if you want!) and tossed with some decent accuracy as well.  Sniper rifle scope options can be toggled to take up your whole screen or generated withing the scope only, with larger weapons requiring similar loading mechanics to standard guns.  Beyond those mechanics are context sensitive sections of the game that will allow you climb ladders and other parts of the environment, use mounted weapons, ski (seriously!) and even drop bombs from a plane which sometimes mixes up the action quite nicely. 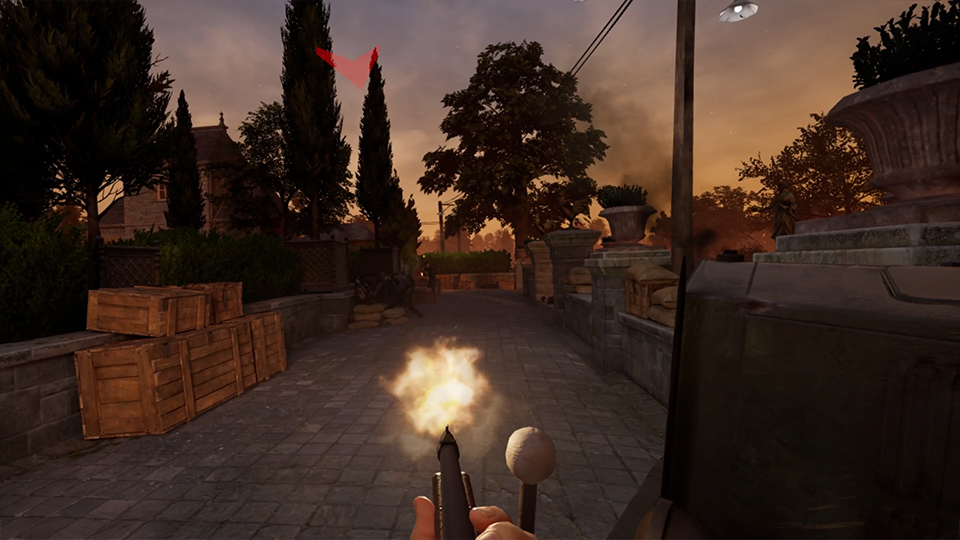 Take out the Nazi scum!

The campaign takes you through 6 missions all over Europe, each broken up in small sections and further broken up by checkpoints.  A livefire gauntlet is available with each stage and requires you to run explosives to a designated area and then run back to blow them up, all while fending off a barrage of enemies. On the multiplayer side you face off against up to 11 other players in a variety of maps ripped right from the campaign.  Standard options like Death Match, Team Deathmatch and capture the flag are in here as are a few additional modes like having to arm and disarm explosives while on a team.  You can pick your avatar and loadout but after that, there isn’t much else to do making it feel more tacked on than anything trying to grab your attention for the foreseeable future.  Should the human player base be absent, bots are put in who do an ok job at providing competition, though you’ll still kill them plenty more time than they will kill you.  Lastly would be the Gallery mode, which allows you to watch WW2 veterans talk about their experiences in new interviews which are spliced in with historical footage and are an absolute treat for those looking to pull some knowledge about that infamous era. 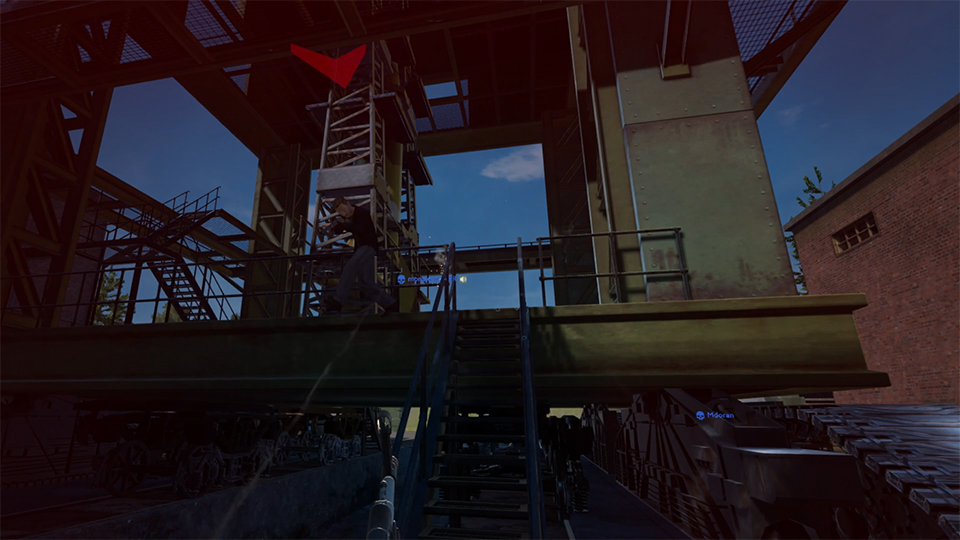 The multiplayer id fun, but too shallow.

Alright, so how does Above & Beyond look given the very high recommended requirements to run it?  pretty damn good I’d say, though that may not be initially apparent as much of the characters look slightly cartoonish with the game looking more like a AAA title from the PS3 era of gaming.  Where this impresses is when you notice just how much is being rendered at any given time.  Driving on the back of a truck through a town while looking into a shop, noticing the reflections on the window, the display in the window, with the shop in full view behind it adds a wonderful sense of authenticity to the game.  Footprints in the snow, a cluttered desk, a dining room will all the food and place settings make every set piece in here a joy to behold, especially when you crank up those settings and enjoy the stellar lighting effects, which are some of the best I have ever seen in the headset.  Every stage in the story or multiplayer brings you somewhere new and typically has a few individual elements that almost never repeat, making each mission stand out in it’s own way.  Storming the beaches of Normandy, driving through an enemy encampment in disguise, fighting inside and submarine or manning a tank as you cruise along the countryside are just some of things you’ll do throughout the 10 hour campaign.  Enemies can look a little more hit and miss, especially with some of their running animations and can come off as silly looking though for the most part, that’s a minor issue.  Cut scenes open and close every stage with many popping up in the middle of a missions, letting you watch some scripted goodness as war machines explode or Nazi villains get thee cumuppins (yup, I used that word) ensuring for an experience that feels cinematic above anything else.

I can, and will, complain about a few items of contention in MoH, but I can’t complain about the audio presentation which uses some of the best 3D audio and effects I have heard in recent memory.  Hearkening back to the games roots and histories is a patriotic wartime soundtrack populated heavily by drums and trumpets that placed me back in this era.  Sound effects are all on point as is the voice acting though there is some dialogue and delivery that borders on being cheesy more than inspiring, but that’s just being nitpicky.  Every mission opens up with a briefing before you are set into action, typically with an OSS ally nearby who will guide and aid your efforts.  Hearing (and seeing) a tank burst through bushes in front of you, or just taking cover as a flurry of bullets impact all around you is harrowing and those seminal moments are some of the best I have had in recent memory. 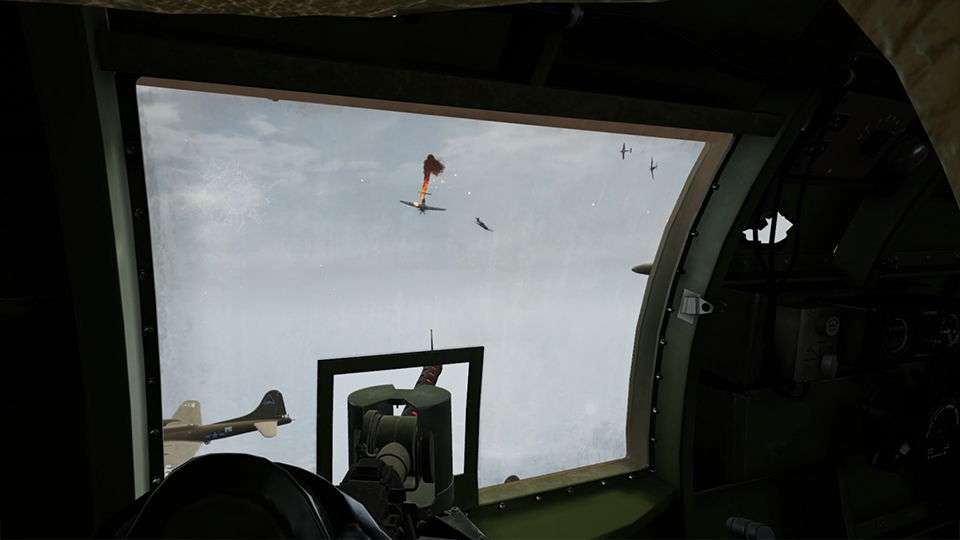 You’ll kill Nazi’s on the land, sea and in the air.

Alrighty, so despite my praise for many aspects of this game, it’s plagued by a few issues that just take away from the overall experience.  Since launch, 3 patches have dropped addressing many issues that others have complained about including the addition of more comfort options as well as graphics modifiers that can help you boost performance beyond just changing the resolution in the headset.  Even with those newer options, this game is still a beast when it comes to required PC horsepower and even on my 2070 Super, moments in this game just chugged.  Even with minimum recommended GFX card going from a 2080 to 1080, I was still constantly tweaking my setup as some stages just ran smoother than others.  I don’t want to harp too much on that as clearly Respawn wanted to make a showcase VR title, not one that necessarily everyone can play, but even if you can run this title, other issues pop up.  The breaks between stage chapters has also been streamlined since launch but even as it stands today, those loading screens combined with the gameplay just make the pacing in here seem erratic at best.  There are sections in this game which jump to chapter complete load screen only to load to a cut scene, followed by 2 more minutes of combat, another cut scene, a little more combat, cut scene, find an item, cut scene, combat and so on and so forth.  What this did for me for me was never let me get into the gameplay as just about any encounter or gameplay element was immediately followed by a cut scene.  If I were to guess, I’d say the devs did this on purpose to help aid in sim sickness by creating “natural” breaks in the gameplay without actually making you take a break from the campaign, but in doing so make many of the stages feel disjointed.  Even those encounters with Nazi soldiers start feel derivative as it mostly feels like shooting the same foes over and over, just in different settings.  Some may be harder to kill, but only slightly so, and while I know this is supposed to be an exaggerated version of WW2, given the liberties taken with the campaign story, I wish a few more liberties were taken with enemy encounters. 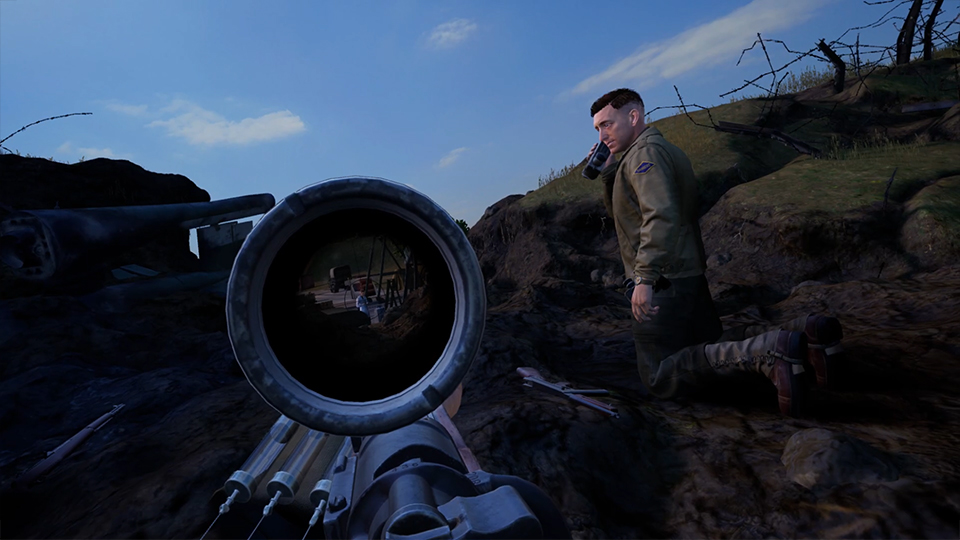 Sniping in VR is awesome!

Medal of Honor: Above & Beyond is a tour de force when it comes to the presentation aspects of VR, but comes up short in delivery and gameplay.  It has some absolutely stunning moments that highlight just how far consumer VR has come in only a few years, but it’s many shortcomings show that there is plenty of room for improvement.  Despite the erratic nature of the campaign, I had a lot of fun killing the Nazi scum in some fantastic recreations from the WW2 era and even enjoyed some multiplayer matches when then servers were populated with people. It’s an epic cinematic adventure and I hope to see a follow up of some type from Respawn as they delivered a solid VR title, I just hope future VR games are a little less restrictive and more streamlined when it come to Virtual Reality.

What would I pay?  The content value is here, imo, to justify the full price but some the pacing issues in here just can’t be fixed via a patch and do hurt the overall game substantially.  Because of my issues with the story and the lacklustre multiplayer, I think $40 US is more appropriate.