Carly and the Reaperman is a quaint little puzzle platformer that has seen a ton of updates since it’s original, 2 player co-op only, roots.  The premise of this game is  that you are in control of both Carly, a little green-haired girl, and the Reaperman, a large floating skull with hands who must aid Carly though the underworld by moving objects in or out of her way to help her get to the end of each stage.  Along the way you’ll meet spirits in need with the end goal being to help Carly return to where she came from. 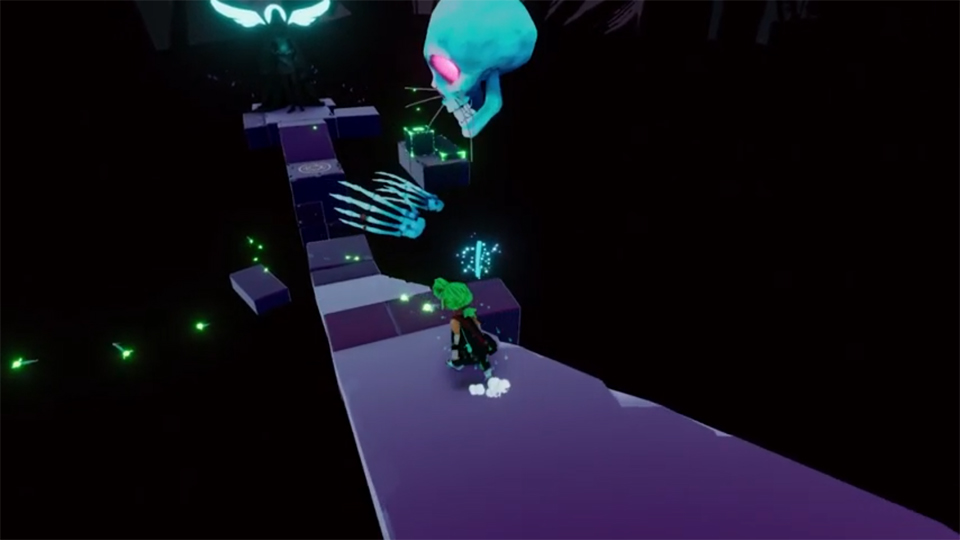 Work as a team or you’ll have troubles

On the PC side, The controls are very simple with Carly controlling like any 3rd-person platformer and for comparisons sake, she plays almost exactly like Quill from the Moss VR game.  As the Reaperman, you can grab the environment, allowing you to get better viewing angles on the stages and can grab and interact with specific items typically building small bridges or stairs for Carly to traverse over to get the next section of the game.  As I said, you can play this alone or co-op with the latter having 1 local player control Carly with a gamepad and the VR player playing as the Reaperman.  Playing alone?  No worries, as you can swap back and forth between the characters with the press of a button for some slightly more challenging gameplay.  Throughout each stage are Fireflies that can be collected to unlock bonus stages and checkpoints to ensure that should you die, you don’t lose much progress in bypassing any obstacles.  Enemies pop up that can interfere with your efforts as they can not only hurt Carly, but move your placed objects, making some of these puzzles a race against time.  As you get through the 50+ stage campaign, new elements are constantly introduced that always keep you on your toes with unlockable costumes hidden in treasure chest available for the Reaperman, should you care about such things.

The PSVR is a different beast however as the co-op play remains largely intact, though the lack of thumbstick for the VR player makes adjusting your position in the world a little awkward as you now have to drag yourself around the level to get proper views.  The 2nd player plays with a DS4 and while the VR controls are a little cumbersome, they don’t affect the co-op gameplay and once I got used to navigation controls, I didn’t really have much issue.  Playing by yourself however forces you to use the DS4 and locks your hands in place, hampering your actions as the Reaperman.  Puzzles become a lot more challenging as I stumbled to perform the most basic block stacking tasks when combined with controlling Carly and while I did develop strategies to work with the controls, I couldn’t help but miss the freedom offered by co-op play or just playing by myself on the PC side of things.  Bottom line here is that if you want to play this by yourself, expect a little more frustrations then playing with a friend. 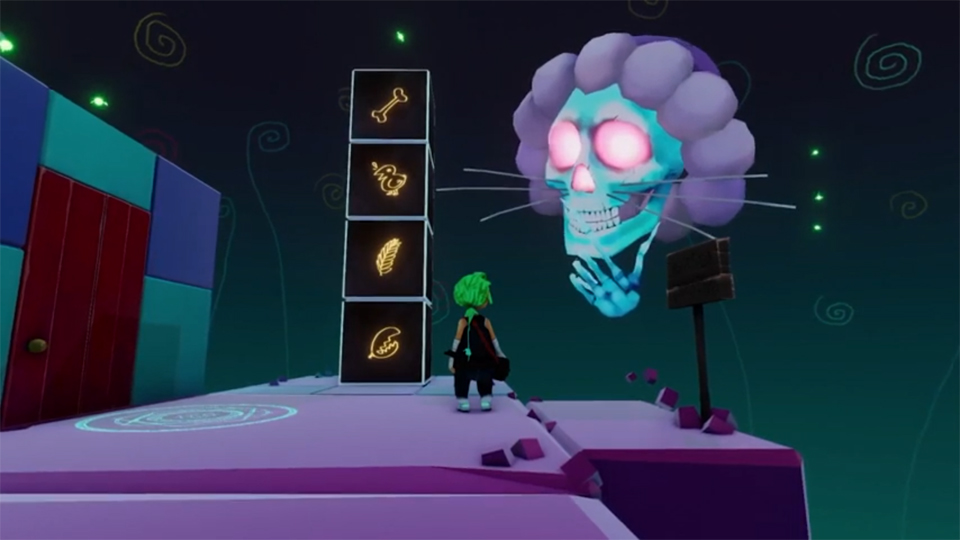 The visuals in Carly won’t blow you away but their simplicity accentuates much of the polish this game carries.  Your hub stage is a small, floating villa comprised of the train you rode in on and the doorways to each stage.  The actual levels are little more basic, comprising of simple rectangular platforms combined to create a stage.  Levels can be relatively flat, very tall or anywhere in between and are typically littered with inaccessible buildings or other remnants from the real world like overhead cranes or boulders with each stage ending in front of an angelic statue.  Carly animates well enough though she is no Quill, containing much less personality then I would have expected, but she still goes for fist bumps and celebrates exuberantly every so often as you play through the game.  Backgrounds go for a more artistic look with painted cityscapes, floating shapes or a few other more subdued choices that blend in nicely with the whatever stage you are on.  Lasers, fireballs, enemies a huge vortex, neon platforms and a few more surprises show up throughout the campaign and spice up the gameplay nicely as well as adding some visual flare to the drab and subdued color palette used here.

The story is told through text bubbles with the spirits you meet making cute little noises, as does Carly who gives little ‘hups’ when she jumps and other one off sounds.  She will comment on the Reapers outfit of choice but for the most is silent with the star of the show being the music, which isn’t anything to write home about, but fits the game nicely with it’s simple little tunes that match the puzzle-platforming genre perfectly. 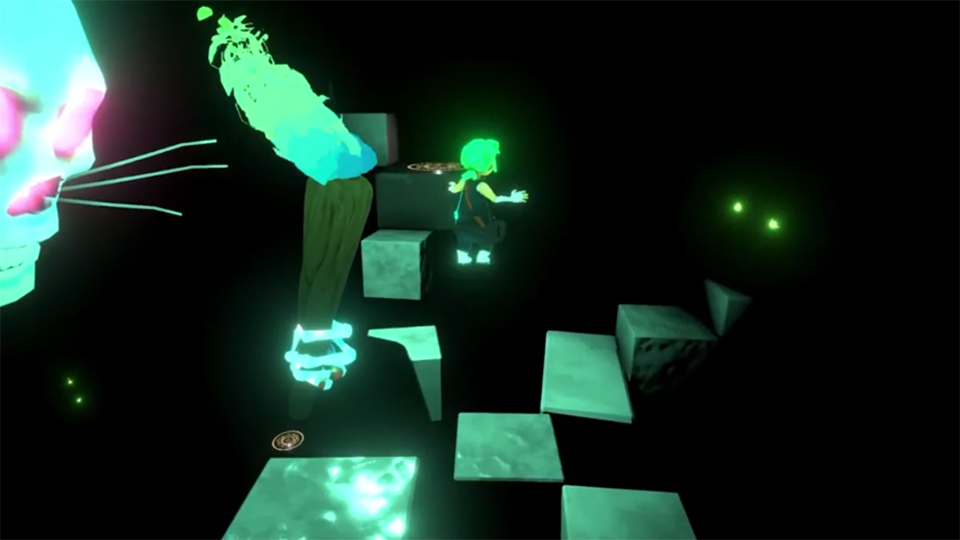 Don’t let Carly get to far in the dark.

Carly and the Reaperman is all about puzzle solving and works best with 2 players. Working as a team is a much more fluid option over playing this solo as it allows each player to not only focus on their specific tasks, but allows for more seamless gameplay, especially when trying to solve time sensitive puzzles.  The VR player can view the entire map, see areas that Carly can’t and even platforms that are invisible to Carly, forcing some co-operative teamwork.  By design though, the VR player may be twiddling his or her thumbs while they wait for Carly to jump around the map, unlock platforms or pull levers, though for the most part I thought the gameplay was balanced nicely between each character.   Playing solo requires you to jump back and forth, and that works perfectly fine for most puzzles, but the ones that do require split-second actions are a lot more challenging when playing alone and those invisible platforms I mentioned now aren’t thanks to the singular screen on your face making those moments a breeze.  Each stage greets you with a lost spirit who can’t recall why he or she is there and once you complete a level, their memories return allowing them to pass on to the afterlife while you as Reaperman, continue to assist Carly in her quest to escape this strange world. 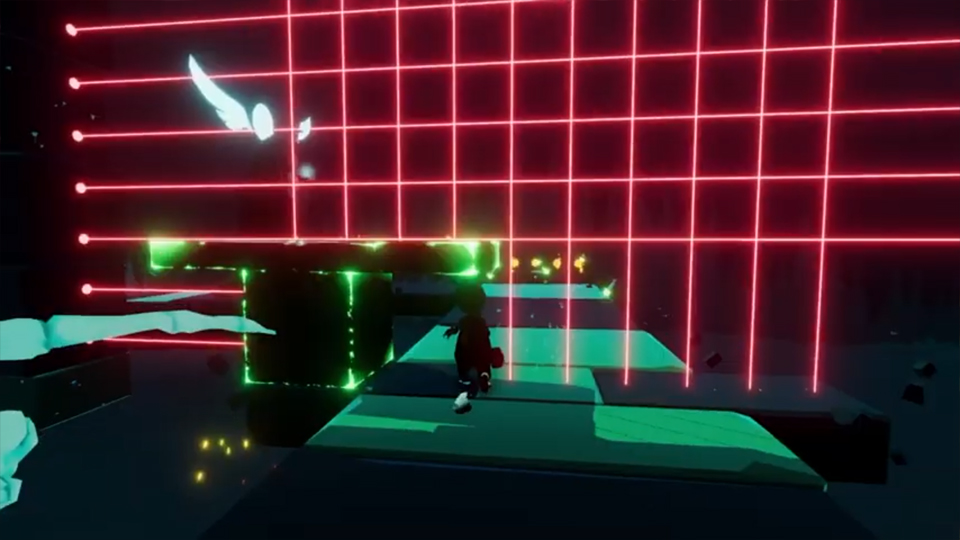 Lasers are a pain.

All in all, Carly and the Reaperman is a solid puzzle platformer that never wears out its welcome with a campaign that should take around 8 hours or so to get through.  Add in that you can play this solo or local co-op  and no matter how you play, you’ll have fun.  I never found the puzzles to be too challenging, though some definitely held me up for a minute or 2 and trying to get all the fireflies adds a nice level of difficulty for those looking to exercise their brains.  I wouldn’t have minded a bit more story here as there really isn’t a lot to speak about but at the end of the day, this is still a refined puzzle/platformer that makes great use of VR!

What would I pay?  This is $20 US and that is a perfect price for this.  You’ll lose a few hours in here as you get through puzzle after puzzle and the option to play with friends makes this an easy recommendation for those who want to include others in their VR exploits.

Odd Raven Studios provided The VR Grid with a press code for this title and, regardless of this review, we thank them for that!