Tabletop RPG fans can rejoice as Demeo looks to bring the true classic Dungeon & Dragons experience to our headsets by letting you and up to 3 other players get together and take on an epic adventure! Choose your character class and let the game be your Dungeon Master as you embark on a quest to release the mad Elven King by venturing to his tomb in the Elven Necropolis. 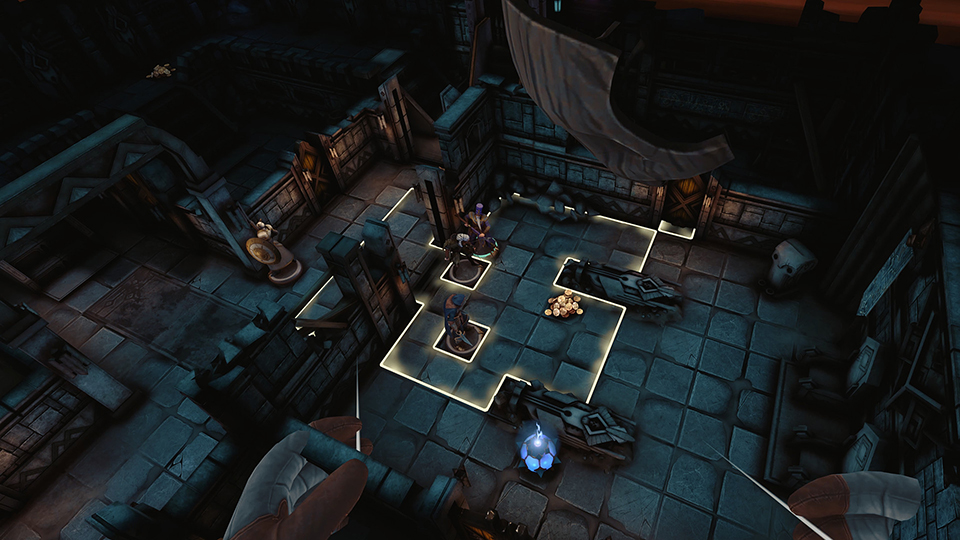 Grab your player and explore the tomb!

As if you were standing before a tabletop, the controls here should feel fairly natural as you’ll be moving your chosen characters’ miniature through the dungeon before you. You can play alone, controlling 3 players yourself, but to truly experience Demeo, this is best played with others. With your hands, which also have laser guides coming from them to help highlight objects, you can grab and move him/her within a set distance with each player getting 2 moves per round; attack, move or play an action card, some of which don’t count against your move count. When in combat, or if you play an offensive card, you’ll have to grab a multi-sided die and toss it on the table, whereupon you may hit, critical hit or miss with the AI foes you face performing the same actions. Each round starts you off with a few action cards with each player getting one heal potion and special attacks specific to that character as well a random action card with more being found throughout each stage. All your actions are mapped to your hand or the table in front of you so too move or attack you simply place your miniature on the square in question with action cards activated by turning one of your hands palm up and grabbing the card and placing it on the play square needed to activate it. Some simple button presses, and hand gestures let you grab & move around the table or zoom in or out in case your view isn’t ideal. There are 13 stages currently available with more planned, including an entirely new campaign, with each game utilizing 3 of those randomly chosen levels and, in each stage, you need to find and kill the enemy with the key and bring that to the door to the next level. Any loot accrued throughout the game can be spent in between stages at a store and lets you buy more of those action cards, some with permanent buffs, that increase your odds of survival the further you get. You can also unlock different types of skins for your characters giving them a little personal flare when compared to the base models.  It may look simple at first but once you start seeing the strategy in your movements, choosing which direction to go, which attacks to use and where to best unleash them, it becomes a complex game where any move could have dire consequences or save the day. 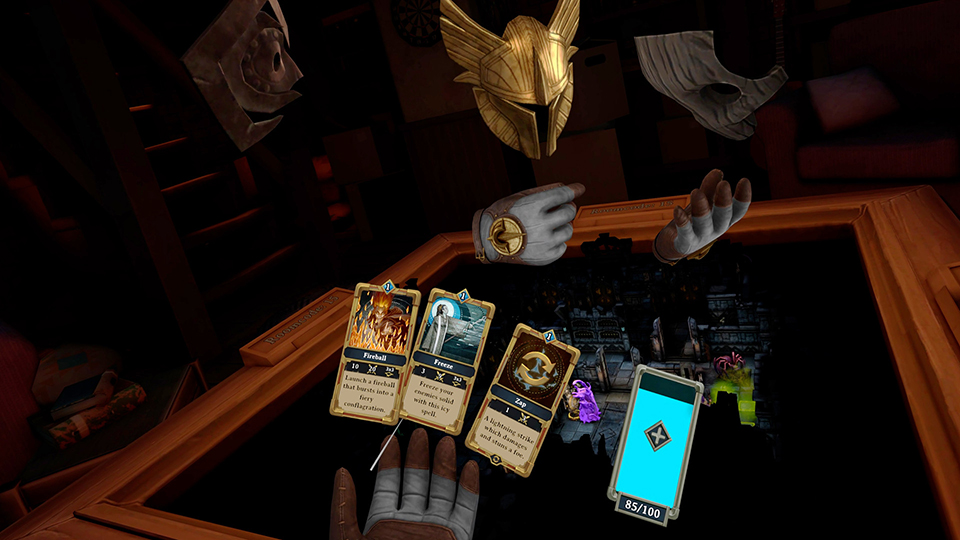 These cards are life savers!

I can’t help but compare this to Table of Tales as it shares many similarities. Unlike that title, the levels in here are static with the entire stage laid out before you and takes on the appearance of grey brick catacombs but in this one, you can only see what your characters line of sight lets them, meaning much of the stages are bathed in shadow at any given time. The miniature representation of your heroes and the creatures you face look like painted figurines on a circular base giving it that retro D&D throwback feel. Of course, when called to action, they’ll animate nicely swinging their spears, firing a bow or casting a magical spell mixing the classic tabletop elements with modern day video games. You have the option of playing in all darkness save for the table or an 80’s style kids basement and I much preferred the latter, especially when you play with friends as it adds an heir of authenticity and nostalgia to the gameplay as opposed to playing in a void. Your Avatars are little more than simple masks or glasses but let everyone know where they are around the table and give you something to look at when you’re talking to them and actually scale up and down in size when you move in and out of the table. The level of detail on just about everything is great and while some enemies may not move too much when it comes to animation, it all works wonderfully and stays true to the D&D tabletop action that has been around for over 40 years.

Sound design is also on point though maybe suffers a little from mediocrity as everything is assigned simple sound bytes that get the job done, but little else. There isn’t much going on in regard to 3D audio as everything is happening before you leaving the sound design in Demeo to be pretty much what you would expect. Heroes will drop the occasional line about their attacks with everyone grunting and groaning when they get hit and while I may not have been blown away by the audio design, it perfectly fits what is going on. 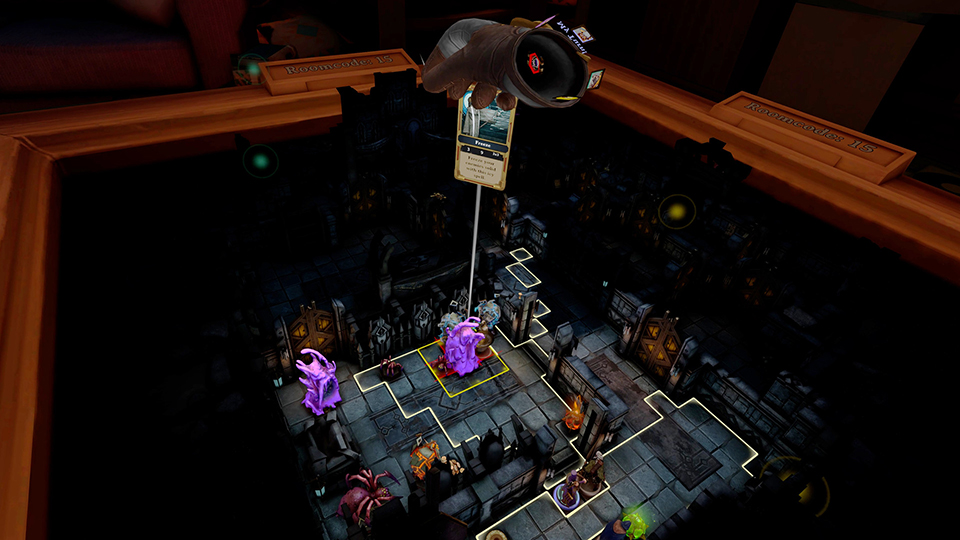 Be careful not get overwhelmed!

I honestly love this type of social game in VR and even playing by yourself is satisfying, but there are some things that could be tweaked. My largest complaint is the endless spawns that occur in each level as it ruined the sense of satisfaction of cleansing these catacombs. I initially thought each stage was its own contained floor but as I cut a path of destruction through the enemy horde, I soon realized they kept coming no matter how many I killed costing me time and resources as it can still be easy to get overwhelmed if you get surrounded. Some will lament the lack of a true progression system as your characters don’t level up and are essentially the same from when you start to when you end.  I’m totally okay with this as it makes each adventure fresh and balanced and those action cards supplant the lacking level up system wonderfully so given the contained nature of this game, a level-up system would only screw up the balancing in here and is not needed.  One odd choice is that if you play alone, you can only control 3 players, which is enough to get through the game, but as you can play with up to 4 players online, I’m not sure why they don’t give you the option for 4, but it’s more of an oddity than a fault as it’s still beatable with 3. You will need to set aside a few hours for this as even if you were to cruise through all 3 stages, that will probably take a couple hours if you can make it to the Elven King’s tomb, and with no save option(even in offline mode) if you don’t do it in one sitting, you don’t get to continue from where you left off, which is frustrating for someone who can often times only play for a little bit, like myself. Other than that, I really can’t complain about much here as it plays pretty much exactly how I wanted. Some runs are better than others thanks to good and bad rolls of the dice (seeing that skull pop up is always a blow), but for the most part it feels fair and balanced and is a ton of fun! 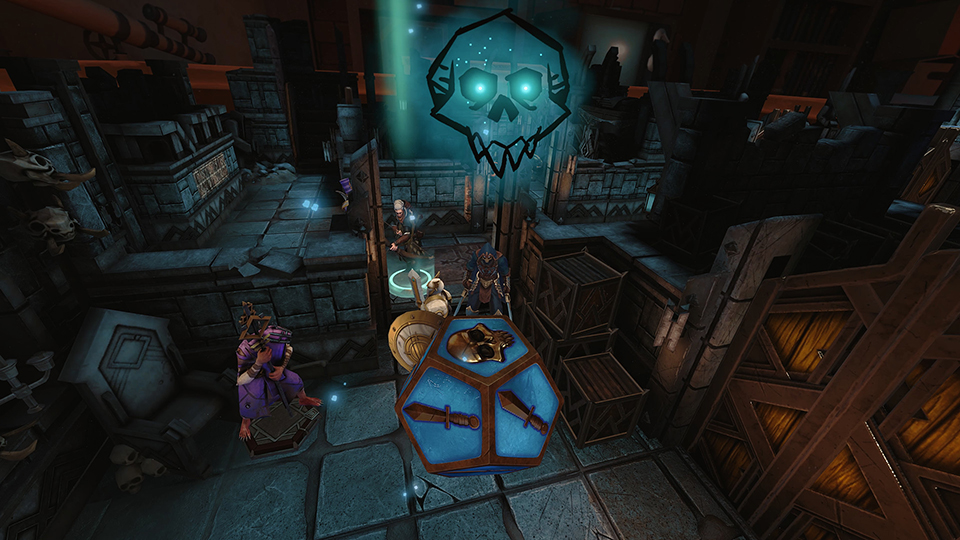 Rolling the skull is NEVER good!

Demeo is my kind of awesome and thanks to level design, random action cards & encounters, every time you jump in feels like a brand-new adventure.  Throw in that you can play solo or with friends and for myself, this has become an instant VR classic that anyone can pick up and play.  It won’t be for everyone as some may just need a little more action then relying on the role of the dice, but once I figured out how the strategy in this game worked and how a wrong move or a bad roll could spell your doom, I became instantly enamoured with the gameplay loop and couldn’t wait to dive back in for another go at the Tomb.  If you have ever been a fan of tabletops or are curious about them, Demeo is an outstanding experience that should not be missed!

What would I pay?  The $30 US asking price on this is totally fair as the replay & addiction factor on this is extremely high, especially if you play online with friends or randoms, just make sure you set aside some time to play this!

Resolution Games provided The VR Grid with a press code for this title and, regardless of this review, we thank them for that!