E-Sports continue to try and force their way into VR’s atmosphere as, in the last year or so, we have seen more than a few team-based shooters grace our headsets that feel thematically very similar.  Hyper Dash is the latest in the E-Sports type shooters that has you in futuristic arenas playing as robotic combatants across a few different online shooter game types in some fast-paced action. 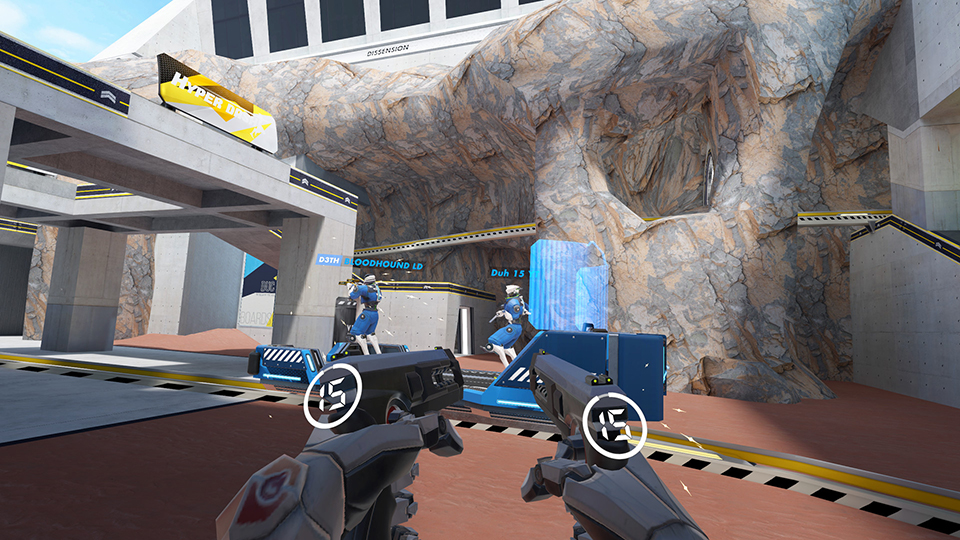 It’s a dual-wielding affair with standard FPS controls in place which includes full locomotion.  Where the game gets its name from is the hyper dash mechanic which lets you teleport around the map though needs time to recharge if used back-to-back.  That teleport ability also lets you rail slide around the map which is by the far the most unique aspect in the game, and one that I liked a lot.  Button press duck and run options are available with the game allowing you to re-program all the button controls to your liking which is great as some of the default options are a little obtuse.  There are a few game types available from free-for-all deathmatch, Control Point & Domination which has 2 teams of 5 battling over 1 or 3 points on the map with the last main mode being Payload, which has 1 team trying to “push” a payload to an end point while the opposing team tries to stop them with all of the team modes having a best of 3 rounds to determine the winner.  Mutators is the last mode which will randomly change up 3 options in a random game mode like health restoring on a kill, infinite run, head shots only and a bunch more so the action never feels samey.  You start armed with some stock pistols while other weapons and items are scattered around each map.  A few machine guns, a sniper pistol, shotgun, and mini-missile launcher make up your arsenal with other powerups like health, holdable shield and Dash boost also being available.  Should servers not be full of people, very competent bots will take their place and offer almost as much challenge as human players.  After each round, scores are tallied, winners are shown on leaderboards and experience points are accrued which unlock avatar and weapon customization options to show off just how much you have played this game!  Level cap is 100 and should you want, you can head to your profile for some more in-depth stats on your overall performance. 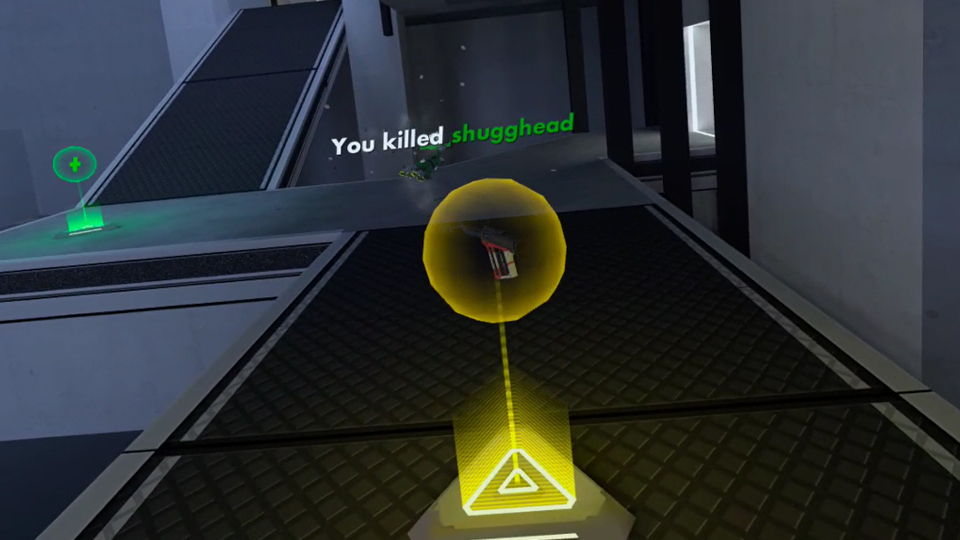 As this is a cross-platform title, the visuals aren’t going for ‘mind-blowing’ but what is here is fairly refined. While you do as play as robots the overall simplicity in textures for both the environments and character models immediately reminded me of the games Solaris and Population 1 but with a Rigs color palette. The robots you play as animate quite well and even looking down reveals your mech body and legs which I always appreciate in a VR title.  The stages themselves are designed around specific game modes so you’ll only be playing specific modes on specific maps with each one carrying a unique design.  The death match map is small compared to the others ensuring you are no more than a few seconds away from your next encounter.  The control point maps are substantially larger offering many paths to get to the opposite side with payload being built all around the objectives track.  The stages do feature some static lighting which adds to the realism though is lacking any significant depth, noticeable when you realize the avatars have no shadows themselves.  I love just how unique each map looks and feels though it is a little unfortunate that you can’t mix up the modes for each map.  Those lacking textures are more then made up by just how crisp and clean everything looks and thanks to that minimalist look, I never once encountered any performance issues playing on the PC or Quest 2 headset.

Sound design is on point with an electronic soundtrack that matches the action nicely, including the tunes that are a little more on the melodic side.  Weapons all sound as they should making for a game that sounds frenetic as everyone dashes and runs around the map trying to survive.  When on teams, your mic is live and when playing on your own, it’s proximity based though you can toggle these setting in the options so it’s button activated or muted entirely and thankfully, you can mute individual players which I guarantee you will do if you over the age of 18…trust me. 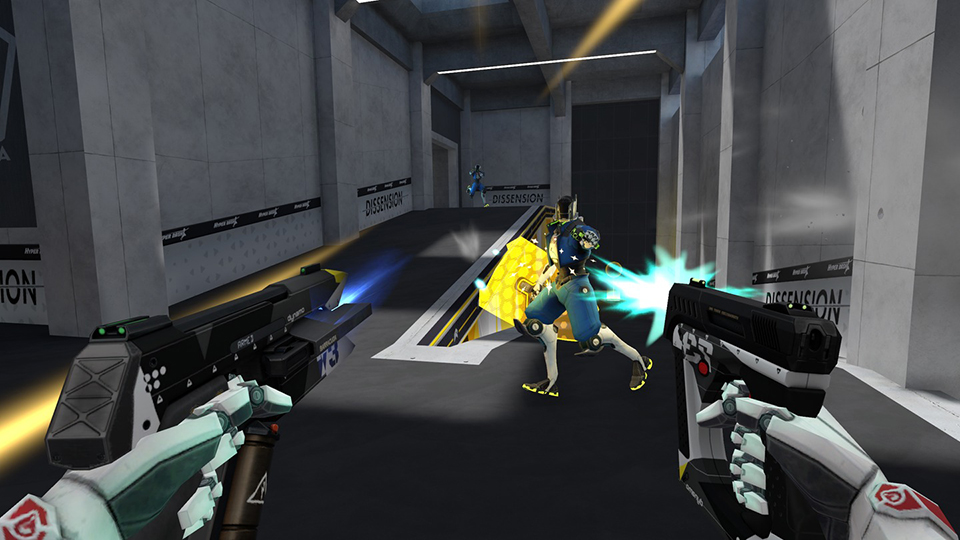 Pew, pew and pew some more!

The one element I appreciated in Hyper Dash above most other VR shooters out in recent memory is the variety in the play modes.  After each match, all the players are in a small hub area and as the game is server based, you can stay in that server and continue on with the players you just met by voting on your next map & match type or leave and choose a specific server and game type from the main menu or hit the ‘quick match’ option which will toss you into something random.  It’s that dynamic that kept me in the headset for just one more match as it’s addicting and feels refined and very balanced.  That’s not say there aren’t some nuances to master as it’s clear that the Hyper Dash move is one that needs time to figure out as I found myself getting my ass handed to me by dudes who could use that move in combination with the gunplay far better than I.  One notable absence is the ability to party up in-game so if you want to play with friends, you either need to play in a private match or coordinate which server you want to play on which may be a task on its own as game chat overrides standard Oculus Party Chat options meaning you’ll have to mess with 3rd party chat programs or just talk outside of the game to play the game together.  Other than that, I was pleasantly surprised with this as it offers a nice mix of classic arena shooting with unique gameplay elements that I’m sure will hook many as it’s one of the most addicting games I have played in awhile. 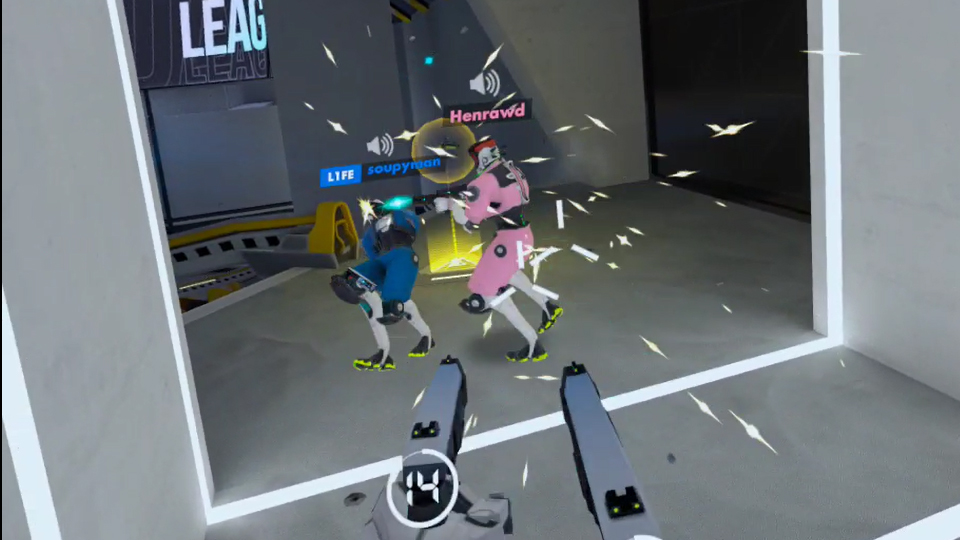 Hyper Dash is nothing short of awesome and fun!  For those looking for a fast-paced multiplayer competitive arena shooter, this is one of your best options currently available.   The rail sliding mechanic really adds a lot of depth and strategy to not just how you play the payload stages, but even just how you navigate around any given map.  The polished presentation, unlockables and the very active community makes this one of the easiest titles I can recommend for those looking for some online fun!

What would I pay? $20 US is an easy ask as you’ll more than likely sink way too many hours into this than you would expect too.  Added to everything I mentioned are seasonal challenges and tournaments and you get a game that does VR multiplayer right!  A must buy!

Triangle Factory provided The VR Grid with a press code for this title and, regardless of this review, I thank them for that!