Ever dream of charging into a room of well armed soldiers with dual Desert Eagles blazing? How about sniping you best friend from across the map? And who among us hasn’t fantasized about sneaking up behind that one camper and giving him a well deserved knife in the back. Well folks your prayers have been heard and Pavlov is here to provide. 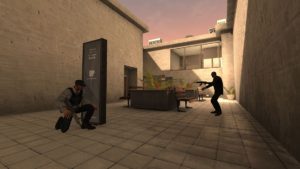 Using cover goes a long way and now peaking around corners has never been easier.

In Pavlov, you will take on the role of a soldier on one of two teams in either a team death match setting or, my personal favorite, a competitive search and destroy game mode. Team death match is a fast paced experience with quick respawns as one team tries to massacre the other and reach the score limit first. The search and destroy game mode focus on a more tactical approach that requires one team to attempt to bomb one of two target locations while the other team defends. Both game modes offer vastly different experiences while also providing a fair share of intense encounters and adrenaline fueled moments of the pure shooter bliss that we have enjoyed for years in various games.  Now for the first time, those experiences are now available in VR and that really brings the heart pounding action to a new level of enjoyment.

Pavlov offers a wide variety of weaponry to play with ranging from knives and grenades to shotguns and assault rifles. Each weapon requires you to interact with it in a unique way while reloading or firing which is true to the real life countertparts. This in itself is a gratifying experience when done correctly, but in the heat of battle this can result in some rather comical fumblings that will be highlighted by the onlookers’ laughter through the built-in voice chat. Luckily the game offers an offline practice mode fully stocked with bots so you can get your feet wet without looking like a complete idiot in front of your friends as you bounce a grenade off a wall into your own team or repeatedly drop magazines while reloading. Unfortunately, the bot training will only go so far as the bots AI is about as clever as a room of well-armed monkeys. Eventually you must dive into the matchmaking and face off against other players. Thankfully players are something Pavlov is proving to have a fair amount of and joining in quick matches is almost instantaneous in my experience.

Movement in Pavlov can be done through the touchpad or OOB Locomotion (think teleportation) but in my experience the touchpad option provides the most fluid gameplay once you get the hang of rounding corners. The only drawback with this option is the orientation of the trackpad impacts the direction you will move. This can make reloading on the run rather difficult at times but I suppose that’s a fair tradeoff for having an option that is otherwise far more enjoyable than point and click movement. Overall the controls are fairly intuitive and we are afforded the ability to remap the controls through the options menu, should we desire.

While visually Pavlov is not AAA quality, the graphics are nothing to turn one’s nose up at. Clear and crisp character models, realistic looking weapons, and maps that are well lit and contain a decent level of detail. Could they be better, absolutely, but the graphics in place did not disappoint me or take away from the overall enjoyment of the game. The audio quality was fair, each weapon having its own sound that was rewarding to hear and the interactions with the various weapons was enjoyable. The maps did not have any ambient sounds and that was somewhat disappointing but the resulting silence did make tracking footsteps and chatty players easy to do. In time however, a little ambience would go a long way to make the game feel more alive. 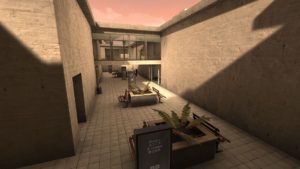 Being an early access game, Pavlov is not without its faults. The game still boasts a few graphical glitches. Occasionally you will randomly release your hold on a weapons foregrip resulting in some wild firing, this experience seemed to be with only one particular assault rifle for me. The orientation of your belt that holds your endless supply of ammo can sometimes shift and leave you grasping desperately at air as your opponents rain hot death upon you. Currently the game only has three maps to choose from, one of which hasn’t been textured yet. But even with such issues, I found Pavlov to be an overall enjoyable experience and surprisingly well balanced for an early access game.

So here we stand, 2017 and our childhood fantasies of a VR FPS experience we can play with strangers and friends from around the globe is finally within our grasp.  Pavlov is a multiplayer shooter that delivers a well optimized online experience for the HTC Vive. But fear not all you Rifters, the game can also be played with the Oculus Rift, with frequent support updates, so everyone can experience this Counter Strike style virtual kill fest that only gets more enjoyable with each new patch released.

What would I pay? As an early access game that is actually fun as well as functional, the $9.99 price tag leaves very little excuse not to pick Pavlov up. It will provide hours of entertainment and an FPS experience that VR is currently lacking plus with more updates promised, this is a game I would gladly support.