So if I told you that Run Dorothy Run was part Happy Drummer, part Temple Run and part Wizard of Oz, could you guess how this game plays?  The VR rhythm genre seems like one of those game types that could benefit a lot from motion tracking while immersing you right in the game.  Yet so far we have only seen some more middling efforts that were nice additions to the genre, but really failed to hold our interest for long and came off as distractions more than anything else.  Can Run Dorothy Run separate itself from the competition or join them as another blip in the VR rhythm radar? 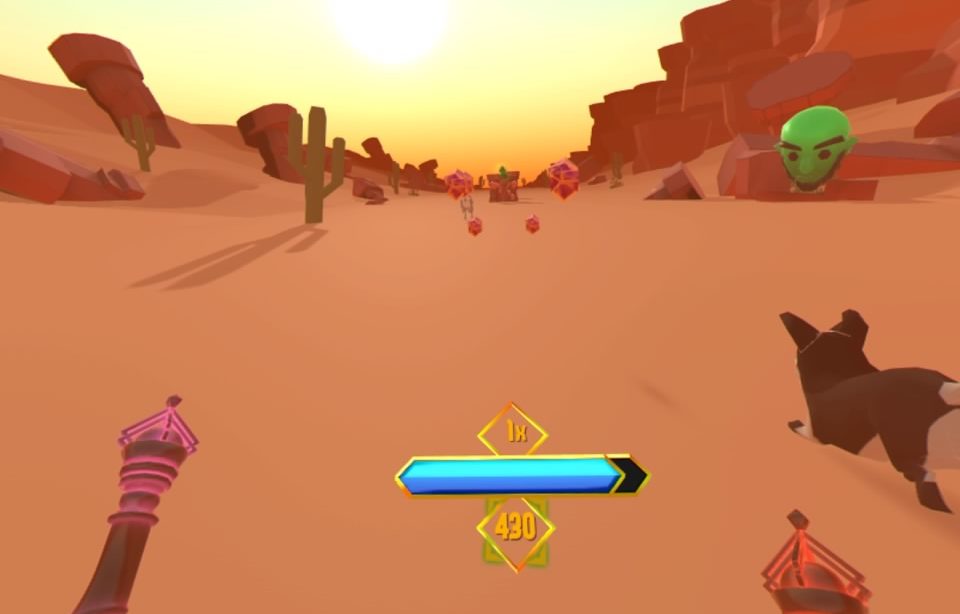 Get ready…the gems are coming!

Armed with 2 Move controllers and a pair of shoes that walk on their own, you are tasked with bringing down the wicked witch of the west after landing in Oz and crushing her sister with your house.  Through 18 stages, you are set in a singular path and pace, always moving forward while gems appear ahead of you and armed with 2 stubby wands, you need to hit each of those gems, which adds a little ‘bing’ type noise in rhythm with the music.  Gems come at you high and low, dead center and to the sides so you best make sure you have no obstacles nearby lest you cause them or yourself, some damage.  As your progress through the game, a few enemies are thrown in to mix up the action and will require you deflect or hit their attacks or they land a blow and take away your precious points.  There is a 5 star system at play here so the better you do, the higher your rank and score.

The look and style of the game here feels more like this was designed for the lesser powered mobile platforms and ported over which surprisingly, isn’t the case here.  Minus the Wizard of Oz and a few other random objects, much of the game looks like simple geometric shapes stuck together to form rocks, statues and even the enemies.  I did like how crisp and clear everything looked, but the lack of detail combined with the simplicity of the game made me wonder why this didn’t look better.  Everything runs smooth which is absolutely great in a game that requires precise timing, but overall, I wasn’t really impressed by anything presented here. 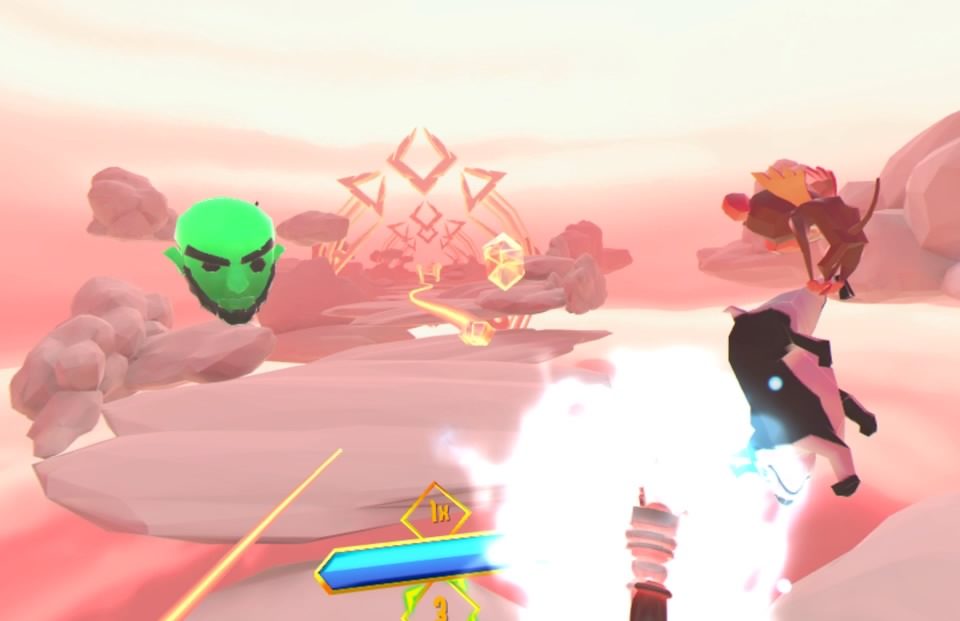 Take to the skies to keep the beat going!

Undoubtedly, the most important aspect of a rhythm game is the audio, and in Run Dorothy Run, it’s a mixed bag.  Accompanying you are your jog(?) is the Wizard of Oz, who constantly derides your efforts and calls you by anything but your name, which did amuse me.  Your other companion is a small flying monkey who throws some compliments your way, but also warns you how to defeat enemies that come across your path.  While both of those guys do repeat themselves often, I appreciated their banter throughout the game.  On the music side, maybe start the game at a lower volume because I found the music to be really loud at default volume.  I think there are only 4 or 5 tracks here though their honestly could be less, or more.  The songs all blend together I became so focused on hitting gems that I ended up ignoring the music.  I think the music genre here is like an upbeat-jazz mix that works, but kind of played itself out by the end of my playthrough.  When you connect with the crystals, different pitches sound which fit in well with the music sometimes, but I found they often overpowered the music and while I’d say they match the music really good, there were occasions when the crystals were coming so fast, that it was honestly hard to tell if they were syncing up or just placed at random.

So, I’ve already brought up my issues with the audio and visuals, what about the the rest of the game?  There are 3 difficulty modes available with easy being a little laid back, though by the end of the game I was still missing my fair share of gems.  Medium gets ridiculously hard and throws a lot more gems all over the place and I definitely felt the burn just trying to keep up with whatever I could hit.  Hard is…really, really hard.  For those that love the this kind of challenge, good on you, but this difficulty setting just pounded me into the ground and turned whatever fun I was having into a defeated attitude.  Suffice to say, I mostly stuck on easy and medium, though it is worth mentioning that on the harder 2 difficulties, RDR gets way more physical and you may work up a tiny sweat reaching for all the gems.  Make sure you have your Move controllers connected before you start this game as everytime I turned them on after I started it, they would show, forcing me to quit the game or reset the console to get them to register.  My last little bit of annoyance  comes from the start of each level, the music doesn’t kick in until the first gem is right in front of you, which is a bit jarring.  Having a few seconds of lead up instead of silence would make those initial few seconds flow a bit better. 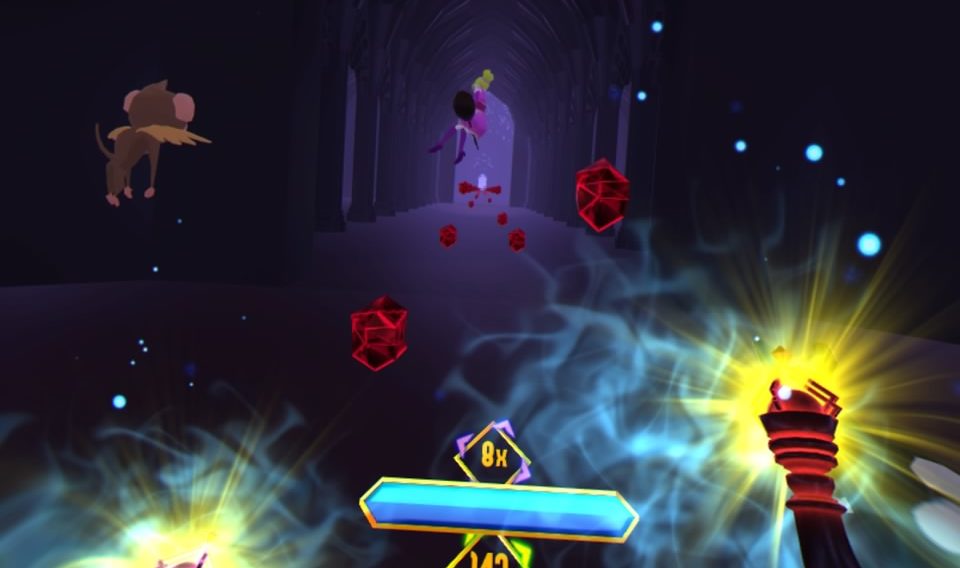 Confront the Wicked Witch in her own castle

The mechanics here are very simple, but I did enjoy them.  For those that are looking to make there games a little more physical, the harder difficulty settings do just that.  When you do find your own rhythm and get into a flow, it can be fun.  Also, while a few enemies are introduced during the game, every stage plays the exact same and after only a couple levels, I needed a break as it started to get monotonous.   There is also a trophy room which display collectibles found in the game, giving you an extra reason to replay levels. This feels more like a budget title than a full game with a bulk of the games content coming from replaying the levels if only to improve your score or challenge harder difficulties.  If you enjoy rhythm games, this might not look the best, but the gameplay is solid and it’sfun when you find your groove and work up a light sweat moving frantically to get all those gems.

What would I pay?  The $30 asking price for this is ludicrous and  I wouldn’t pay more than $15. The content here is alright, but compared with other titles  priced roughly the same, the quality and quantity of the content here just isn’t in the same league.

Virtro Entertainment provvided The VR Grid with a review code for this title and, regardless of this review, we thank them for that!