This is Primal Hunt. A VR hunting game in a future where dinosaurs have been brought back to life. Strapping on your cyber suit you must venture into a variety of biomes to hunt down your prey. There haven’t been a ton of VR hunting games to talk about so when I heard that the crew over at Phaser Lock Interactive (makers of Final Assault) were making a dinosaur hunting game called Primal Hunt, I was immediately intrigued, as the few games in that genre that I have played have been…. lacking (play turkey gobble sound) And after watching the trailer for Primal hunt and learning that a few of the developers on the project were also involved with the classic Turok franchise, I’m not gonna lie, I was a little excited as the Turok games do hold a place in my heart….and PETA be damned, I love killing me some virtual animals. 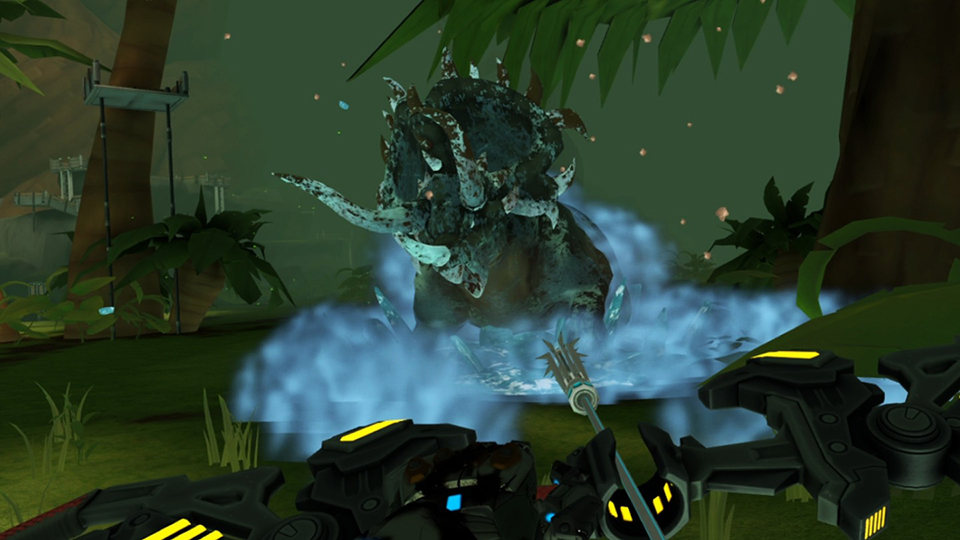 The bigger dinosaur’s require special tools to take down.

Now let’s get this out of the way, for those looking for their next Turok game, this is not that, and while it does bare homages to that franchise, this is first and fully a hunting game and plays much more like a stripped-down version of monster hunter with a combat system more in line with the PlayStation Horizon series. Anyways, jumping into the game a warden introduces you to the hunting lodge, which consists of the main hub, a shooting range and trophy room. It’s in that main area where you pick and choose your next mission as well as customise your loadouts via a large console. Starting off you are taken through a tutorial stage which breaks down the core mechanics of the hunt, teaching you the basic VR bow & arrow action and explaining the various tools at your disposal. Your bow is your main weapon and carries with it 2 base arrow types with additional ‘special’ arrows being unlocked as you progress. The first is your Kinetic arrow which will be used mainly to dispatch your foes while the other, a grapple arrow lets you tether to specific, and typically high points around each biome. Ammo and health pickups can be found during each hunt at select locations and automatically restock after a short

period of time while a wrist mounted holographic mini map displays the locations of said pickups as well as dinosaurs that may be roaming the map and most importantly, the clues that will lead you to your target.
Each hunt tasks with killing a specific dinosaur, but to do that, you need to find clues to nail down its location. This is where ARTEMIS comes in, your holographic interface, which lets you scan the environment for clues in marked areas & tag dinosaurs for easier tracking and can be toggled by reaching up to your head and pressing the trigger button. After analysing 3 clues, the location of your quarry will be narrowed down to a small area where the hunt can truly begin. Gaining experience is the primary goal here and is accrued with each kill and objective completed. As you level up you earn skill points which you can spend on the skill tree to further enhance your ammo, armour and other buffs. Progressive hunts will see many obstacles put in your way and the further you get in the campaign, the more frequent (and often larger) those obstacles can be. 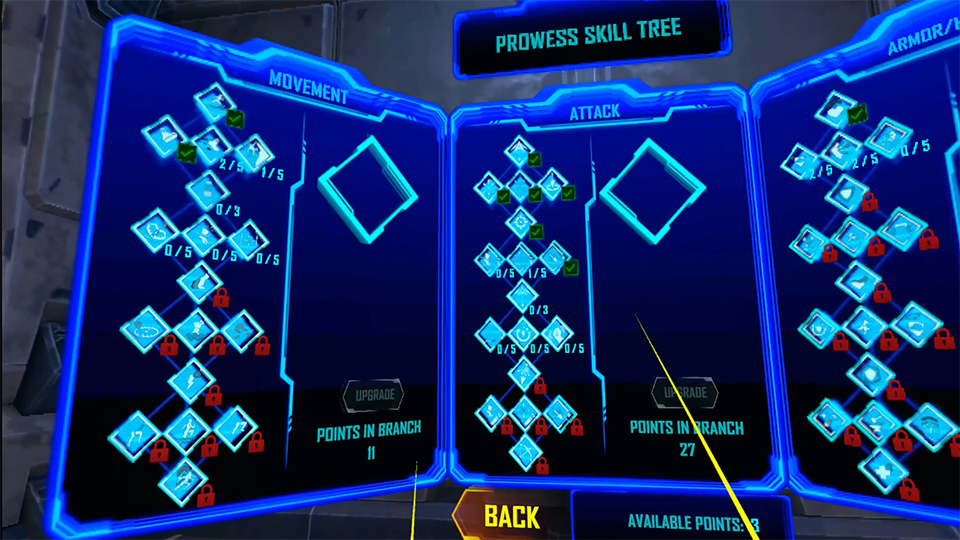 The skill tree has a lot of options to upgrade!

The opening stages are fairly simple, easing you into the strategies of the hunt though soon enough, to get to your prey you’ll be defending against packs of compy’s, raptors or territorial beasts like the Triceratops and Stegosaurus…Stegasauri???? This is where stealth becomes key as the sounds of your footsteps or your nearby presence may be enough to alert them, and once they see you, you better be prepared for a fight. Crouching lets you walk silently, and, in most stages, there are areas of foliage which you can hide in, however once spotted whether intentional or not Dinosaurs, will often charge or dive at you so you’ll need to be quick with the arrows as even the smallest creatures can overwhelm and kill you. Thankfully, you are equipped with an energy shield which can block close quarters attacks though I often found it much better to keep my attacks of the ranged variety to avoid being swarmed. Regardless of your approach, once you dispatch your main objective, you’ll need to dress the creature by scanning it and using a laser to cut it open and access the organs, pulling them out in a somewhat grim fashion then finding a teleporter back to the lodge. 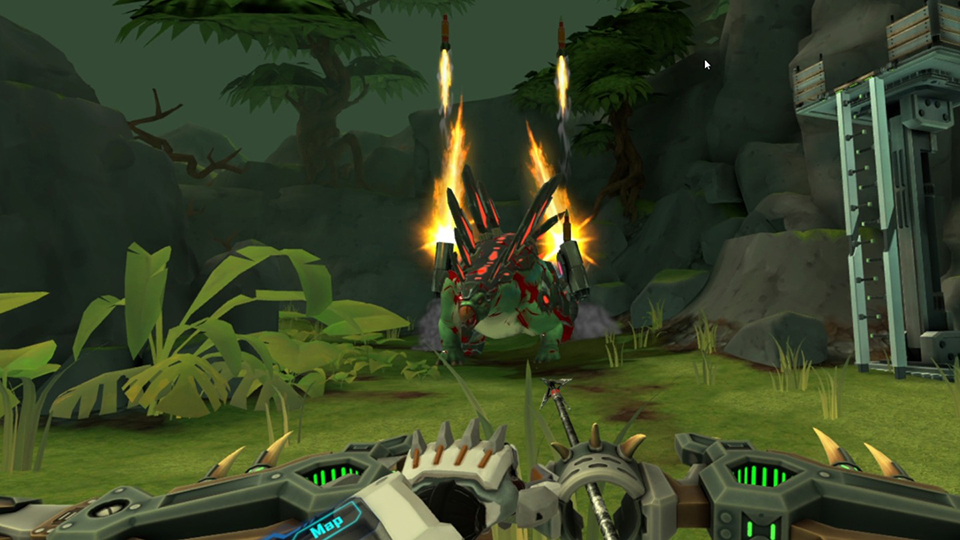 The tech dinosaur’s offer a ton of challenge!

When this ALL works as it should, it’s a good time. However, while many aspects of the game feel rather polished, at launch, there are some areas that need a little TLC. Quite often, dinosaurs may be missing animations causing them to remain standing while they sort of hover wherever they want to go. In addition, they would at times also get caught up on geometry making for a very janky mess as they glitched about…a problem I also found myself running into from time to time. AI was hit or miss as well; an aspect can make or break a game of this nature. Dinosaurs here can be fun to watch at times as the dino’s carry about their prehistoric lives, but at the same time they can also be very easily exploitable when in combat as I found just being a little higher than them rendered me invisible most of the time, allowing me to unleash arrows from my cover as i watched them helplessly run around the area in confusion as I picked away at their health. However, on the flip side, Pteranodons flying up above me often saw me while I was under tree cover, triggering attacks I should have been avoiding. Death can also be overly punishing as dying when on a hunt results in a complete restart of the hunt so whenever I encountered an exploit, I typically abused it as the risk of death could have meant the loss of up to 30 minutes of gameplay.

Given the game utilises a 3-star system in conjunction with objectives (basically don’t kill this type of dinosaur or kill these other dinosaurs) I think, in the interest of keeping the challenge factor in place, a continue option should be available upon death that lets you start back at the last clue you discovered but at the cost of a star or something along those lines. I also found the pacing of the campaign to be a little drawn out as the rate at which weapons, armor & upgrades are unlocked felt overly grindy and seemed to unnecessarily pad the game length. Something I really felt here as pretty early on, the game loop does begin to feel a bit samey. I’m not saying it’s bad, just the build to the next dinosaur is so gradual that it was hard to see where my skills and strategies were improving when they were. Finally, there is the shooting range. A rather bare bones affair and I spent almost no time there; however, the trophy room is something that I began to care about as I raised my kill count. It’s a massive room that lets you place any of your main objective kills so while it’s initially a rather large, empty, and boring room once I had a few kills under my belt, and a few larger animals to display, I actually started to care about its aesthetic, reorganizing it as more and more dinosaurs succumbed to my skills. These sorts of time filler type additions aren’t typically my thing, but in Primal Hunt, I was quite happy to show off my kills and with co-op multiplayer coming fairly soon, maybe I’ll get to show it off to a friend too! 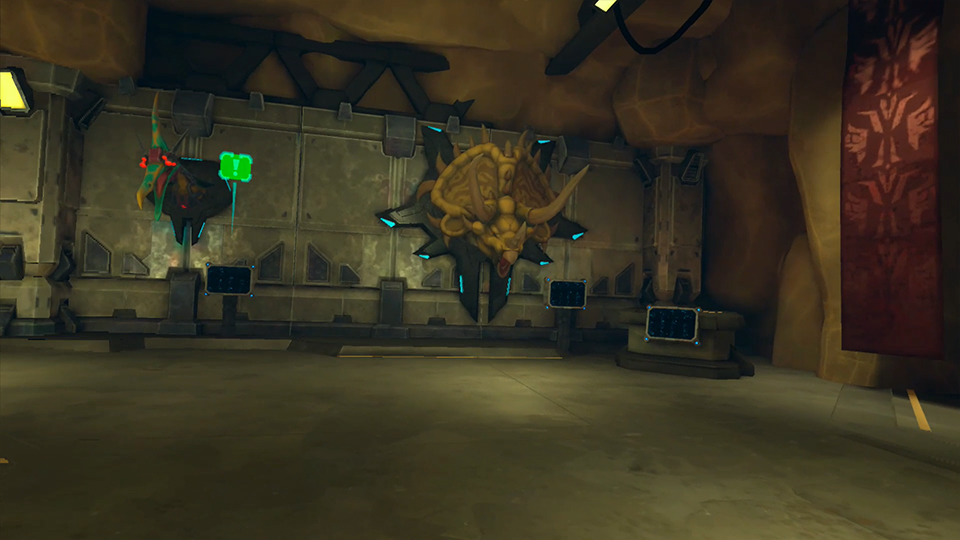 Visually Primal Hunt looks like a Quest game and while I don’t mean that as an insult, it’s not exactly praise either. Each of the 10 maps are very large but that size comes at a price as the visuals in the stages can look quite barren at times. The lush jungles are anything but, with scattered foliage lining empty paths and texture quality looking very basic. The art style used is cartoonish, which lends itself well to VR but when you factor in the all-encompassing fog that’s always in the distance, the levels just don’t look great, just serviceable. In contrast to the environments are the creatures you face which look great and animate quite well (unless they glitch out) and it’s totally impressive to see a 30′ T-Rex roaming around looking for a meal or an armoured ankylosaurus charging across the landscape. One of the most fun and most Turok-like inclusions are the death cam kills which not only show the dramatic takedowns of your prey but dressing them also shows the quick, bloody removal of a vital organ. Should you get taken out, you are treated to a cut-scene showing your very gory death as whatever dinosaur that ended you rips you to shreds. Both of these gory visuals can be turned off for those that are squeamish, but for myself, I smiled every time I saw them…until I realized I had to start that stage over. 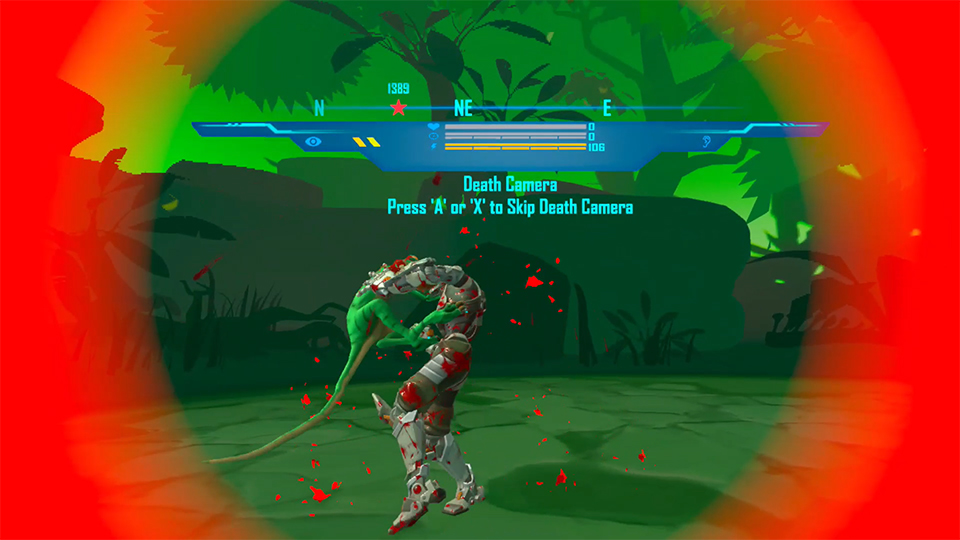 There’s a lot to Primal Hunt and even though I did bring up a bunch of issues, none of them break the game, they just hold it back from greatness. With a campaign that will take somewhere in the neighbourhood of 15 to 20 hours to beat an ever-increasing challenge as well as a hefty skill tree that includes weapon and armour unlocks, there is a lot to get through here and I’m having a fair bit of fun in the later stages trying to figure out how to successfully take out my prey while avoiding dying myself. Hopefully the bulk of my technical issues are fixed shortly after release but even as it stands at the time of this review, it is one of the more unique games I have played in VR in recent memory and well worth the $30 asking price. I’ve killed a ton of dinosaurs in VR, but I don’t think it’s ever been as satisfying as it is here.

Phaserlock Interactive provided press codes for this title and, regardless of this review, we thank them for that!