Scalextric has seldom been reproduced on gaming consoles as far as my gaming knowledge is concerned, and after experiencing Tiny Trax, I can now understand why. There have been plenty of arcade and console games such as Super Sprint, Indy Heat and Micro Machines, all featuring the same style racing from a bird’s eye point of view, Tiny Trax has a fixed rail racing line as befits a Scalextric track but the hustle and bustle of jockeying for first place is sadly missing, and with that, much enjoyment. 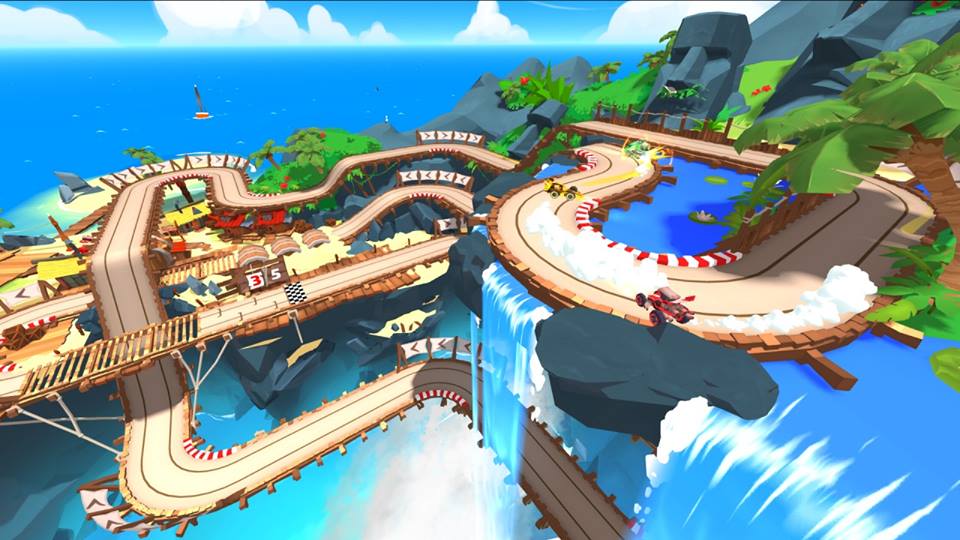 Live out your scaletrix dreams!

The game is comprised of 3 different themed courses; Pirate Bay, Alpine and Intergalactic, each consisting of four tracks. The tracks offered up are very stylized and colorful leaving us with a cartoony look that features very creative use of the themed courses with imaginative surroundings and interactive sections. These mini roadways offer a twisty, windy run with plenty of ramp jumps and gravity defying turns. Pirate Bay for example has one stage which feature the lower half of the track immersed underwater. Dip your headset so your head is submerged and the visuals and environment take on a bluish, bubbly tone and the sound effects become all warbled. Tiny Trax does have clever ideas such as this, which is an essential requirement as to ensure that everything becomes more involved and interesting. The art and creative development team have done a superb job in dreaming up a wonderful play area with plenty to admire.

Upon loading, a short tutorial details the controls and allows you to determine exactly how you wish to view the play area. The tracks can be zoomed in and out and positioned so you feel comfortable with your playing distance. The main screen then allows you to choose between cup and single races as well as multiplayer. You are then free to choose between a variety of vehicles and colors. None of the vehicles though possess any differences in how they handle, it’s all just aesthetics.

Control of your vehicle as you race around the track is by Dual Shock. The right trigger button for acceleration, X for a boost and the thumb stick to maneuver around the corners. The tracks consist of 2 racing lines which the vehicles are glued to, but a press of the square button lets you switch lanes thus attempting to overtake. 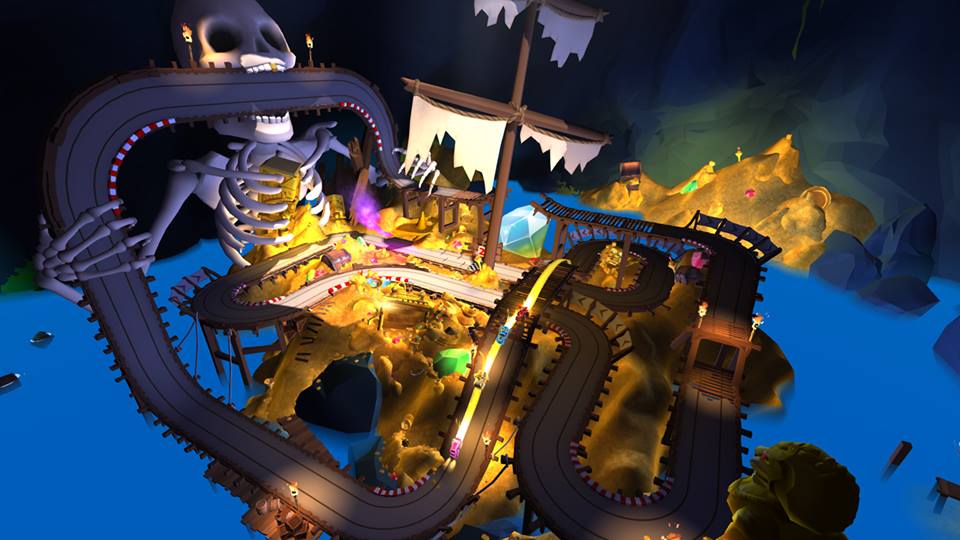 There are 5 laps to each race and completion of each cup unlocks the next set of courses.  My main bone of contention with Tiny Tracks is both the Scalextric style gameplay and control system. Both those factors provide a game which, although very pleasing to look at and be immersed in, lacks fun and variety giving this game very little appeal. If Tiny Trax was of the Super Sprint, free moving theme, then this game coupled with its clever ideas and graphical style would have scored quite highly.  As with a Scalextric track, a press of the trigger button propels your car forward following your racing line but here you need to turn corners and jump bridges.  As you approach a corner, successfully negotiating it is all down to timing. A graphical icon around your vehicle shows a circular bar which you need to time correctly. Too late or early on a turn, or press the thumb stick too far then you find your vehicle stalling and coming to a complete stop. Time your cornering perfectly on the green indicated sweet spot and you increase your boost bar.

After several hours of play, I never got used to this control method. I thought practice would have made it feel a bit more natural but I found it lacks the intuitiveness and fun, which a racing game should be.  Instead I was constantly battling with this method and feeling increasingly frustrated.  Furthermore, every race I played I ended up finishing in last position. I found the computer controlled opponents you face are far too good to be fair. Unless you perform a perfect 5 laps then you can kiss goodbye to winning. One slight mistake from the timed corners and you end up falling behind and once you do fall behind then there is little chance to catch up. It’s an infuriating situation where the computer controlled vehicles are faultless. With the Multiplayer option, at least both players can now suffer with this mechanic, making for a more fair race, albeit with the same lack of fun.

Also, aside from the different locations and tracks, each race still essentially provides the same experience. Hold down accelerate, traverse the cumbersome and frustrating corners for 5 laps until the finish, which is a welcome event, and than do it over again. 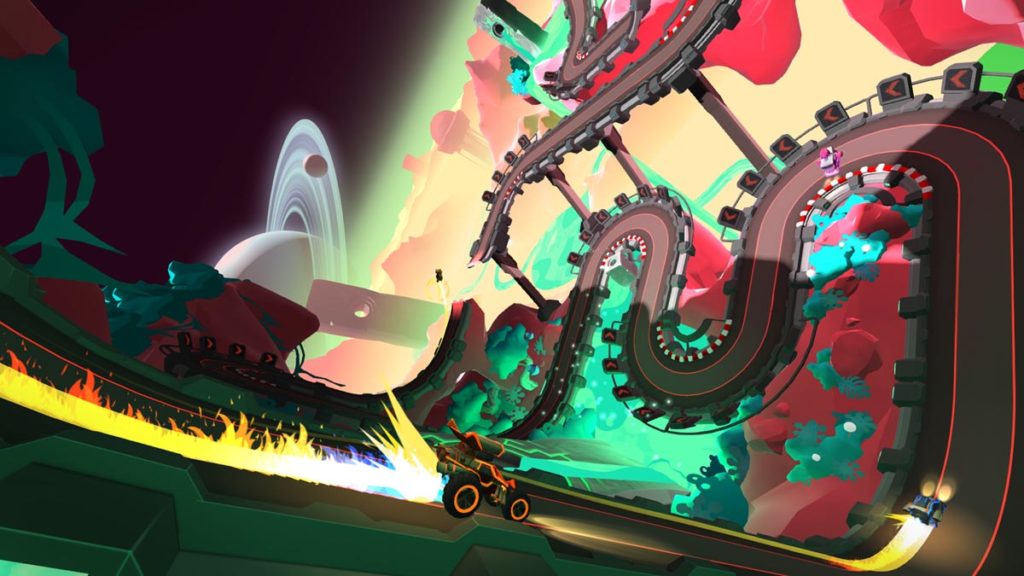 Getting these corner boosts is waaaaaaay to hard!

It’s a shame because if the control method was radically altered then it would have been a different beast. For anyone willing to persevere and master the controls,  then they will probably get more out of the game, someone else may take to it better than me but in my case I just found it very unnatural and intrusive.

What would I Pay? At £12.99 it does represent good value if this game appeals and you are able to crack the control method. I feel for some it will be hit and miss, you will either love it or hate it.

FuturLab provided theVRgrid.com with a review ccopy of this game andd, regardless of our score, we thank them for that!