I’ve never been much of a virtual pet guy…like ever.  I think the closest I have ever come to caring about a digital animal would the dog from Fallout 3 and I guess 4 (different dogs).  I’ve watched countless animal companions die and quickly moved on, often finding a replacement soon enough only to have the creature bite the dust.  The point I’m making here is that, as far as video games go, I’ve never gotten attached to my gaming animals.  Falcon Age gives you one the most immersive animals in gaming with a pet falcon and tasks you with inspiring the people to rebel against your oppressors and take the lead as you fight back against those cold-hearted machines. 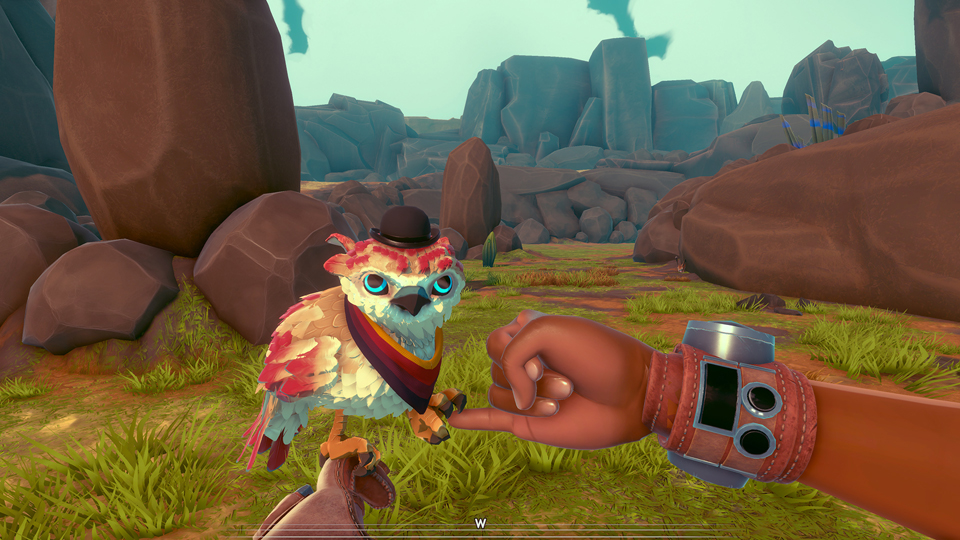 This falcon is a helluva companion!

This is available out of VR but for the purposes of my content, I will only be talking about the VR controls and gameplay.  You can use a DS4 if you’d like, but to fully immerse yourself in this world,  2 Move controllers are the way to go with the default movement system here being click turning and teleportation though thankfully options to turn these off for full locomotion are available.  There are some minor adjustments to the comfort options so you can tailor the game to your own limitations, if any.  The game is open world-ish with said world being broken up into smaller areas that become accessible as you navigate through the campaign.   The game has a linear plot including some optional fetch quests with the bulk of the action having you face off against your former robot oppressors.  You’ll encounter a host of NPC’s who will help you along your journey which include folks who give you those quests and a vendor whom you can purchase items from, with the most important ones being new gear for your falcon.  It’s a standard fare that reminded me very much older Zelda games (I haven’t payed the last 2) and I dug the old-school feeling this game gave me.

You rescue your falcon early on when she is just a chick and quickly learn how to give her basic commands, typically by pointing at something and pressing the Move button.  She may fetch an out of reach item or take out a nearby animal but where you need her the most is the combat as in most encounters you need to work together to dispatch your foes.  Your falcon will knock enemies out of the sky, or smash them on the ground, maybe even picking them up to expose their weak points.  It’s not quite as easy as it sounds as your falcon is a tad aggressive, often putting herself in harms way thanks in large part to some turrets scattered about.  With your baton you need to take out these turrets before they damage the falcon, hurting her and removing it from action until you heal it with some crafted food or a little bit of love.  Like most titles, the further you get in the game, the more challenging the enemies become forcing you and your bird to perform specific actions to take them out.  You can craft different food stuffs to aid your falcon either healing her or giving her temporary buffs before a fight is about to commence. 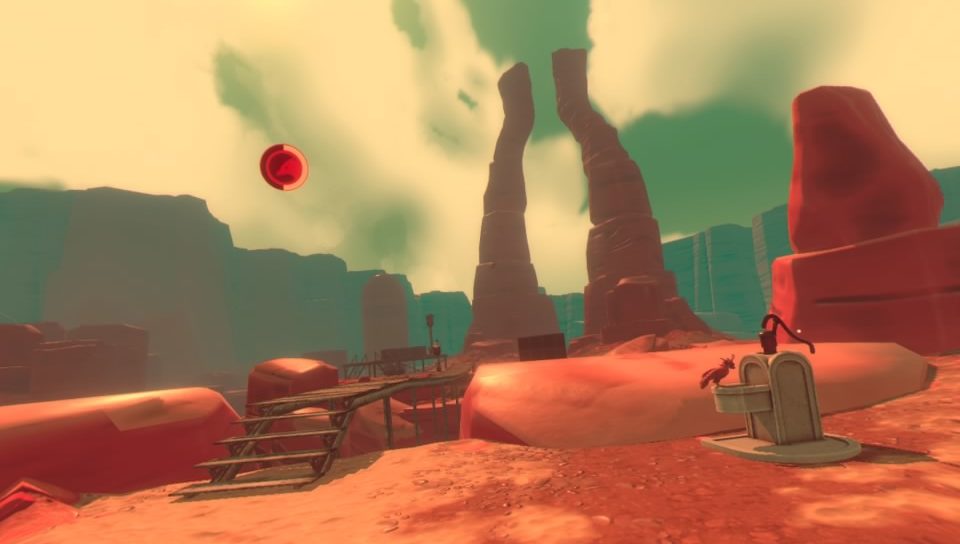 The scope of some of the set pieces is impressive.

Falcon Age opts for a more cartoonish look which allows it to pop in the headset thanks to some large areas and the brighter color palette.  NPC’s you meet don’t have a ton of animations, typically staying in one spot, doing whatever it is they are doing, reminiscent of older RPG’s.  They look good enough, dressed in robes and other garb akin to what you would see in more arid areas of the world.  The stages themselves look good with sprawling cliffs and rocky, desert areas which don’t really contain much else besides said rocks and some grass that appears to grow in front of you as you move forward.  There is also a fair bit of pop-in which is made more apparent in the headset and does detract from the game a bit.  The other areas you’ll be venturing into would be the refinery and factory settings, controlled by the enemy whom are very much about pushing industry forward by whatever means necessary.    The robots come in varied form and sizes and there is some wild life populating the world as well to help break up the monotony of some of these areas.  The star of the show is the falcon who looks great in either her chick or adult form, which you can toggle, with feathers that move in the wind and react too your touch.  The bird comes with a ton of funny little animations depending upon what it may be interacting with and has lots of personality. 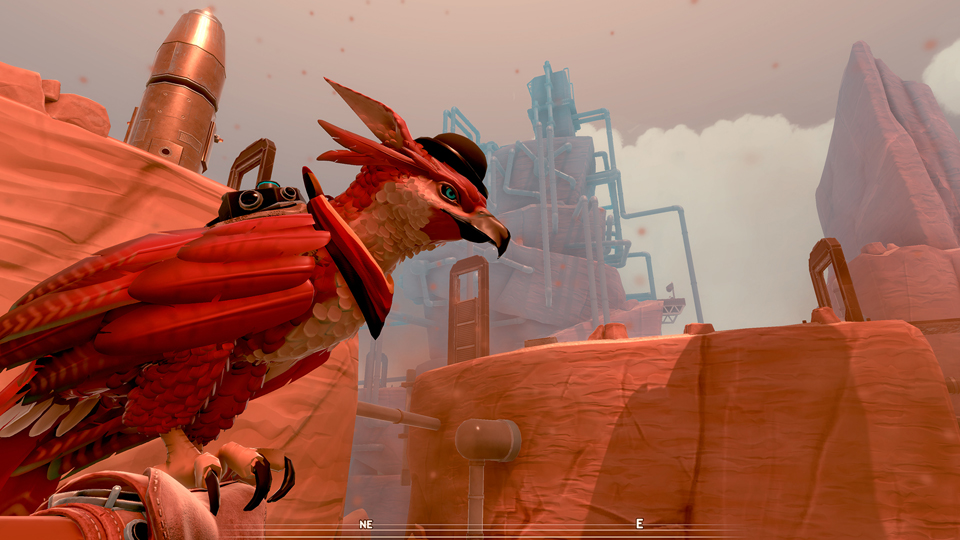 You can put all manor of add-ons on your bird.

The audio in here is serviceable but doesn’t really stand out as anything exceptional.  Music changes with whatever is happening and is pleasant when just walking between combat sections but whenever you reach a setting where the music changes, one track abruptly ends while the next one just kicks in instantly, making the music janky.  Other smaller sounds are here with enemies making up the bulk of the audio effects with their robotic noises and attacks.  NPC’s may greet you with an audible line before falling silent as you read through their speech text with an occasional line of text being read before falling silent again, which is also a little off putting.   It all still works, but I can’t help but feel like the audio design was not a priority for this game.

As I said, I do appreciate the old-school Zelda vibes I get from this, but unlike those titles, Falcon Age does suffer from a few issues.  Initially, the world you walk in consistently provided you with distractions while moving between objectives but as the game progresses and you are forced to back track, there isn’t much to do except walk and occasionally fight the same sentry bots that repopulate certain areas after you have left them.  In my initial hour of the game, I was enamoured by my falcon but the longer the game continued, the more this feeling went away.  With smooth locomotion on, she never stays on your arm so in combat situations, she was constantly getting taken out as I couldn’t keep her away from turrets before I could deactivate them.  You can collect a ton of baubles for her to play with, and while some of these interactions are amusing, the bulk of them are one-and-done animations that I won’t bother to watch again.  Don’t get me wrong, I still love my falcon and I enjoyed the balance between myself and her in combat situations, but the reliance upon trading between my attacks and hers also got a little stale towards the latter half of the game. 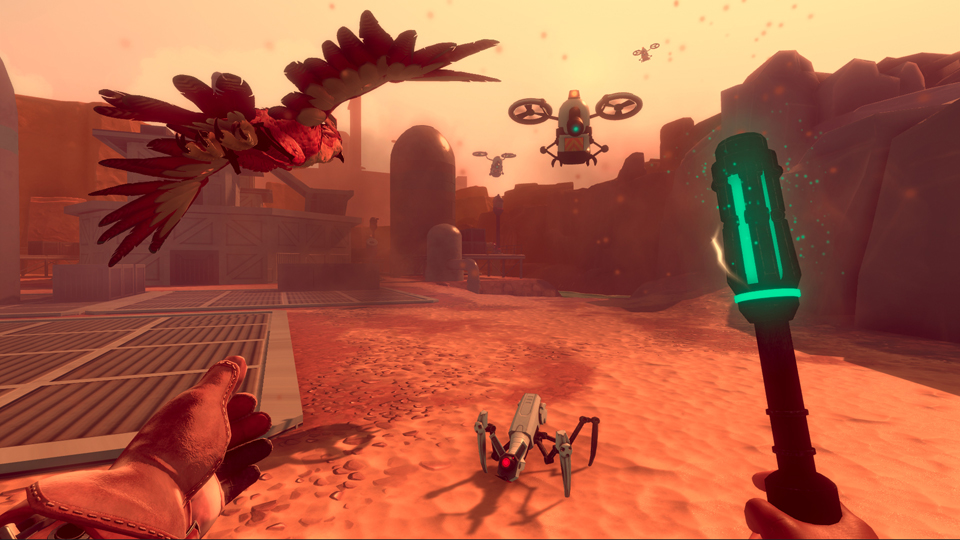 This is basically a buddy movie with a bird sidekick…who kicks ass!

At the end of the day, Falcon Age still gets more right then wrong and I had a fun time saving the planet side from the oppressive Outer Ring Company and their robots.   Having a falcon companion along for the ride is a fun and new mechanic that I’ve never experienced before.  It has a few issues, but I still loved the throwback gameplay and the world this takes place in.  If you like first-person adventure titles, then I say definitely give this a go.

What would I pay? Given the content and scope of the game, I think $20 is a bargain for this.  The campaign will run you anywhere from 4 to 6 hours and offers some fun VR moments and unique gameplay.  It’s not perfect but gets enough right to make this an easy recommendation to anyone looking for their next VR adventure.

Outer Loop Games provided The VR Grid with a press code for this title and, regardless of this review, we thank them for that!