Early VR first-person shooters were met with excitement, the majority of releases were basic wave shooters or shooters with teleport only movement. Nowadays, VR users seem to have found their FPS legs, allowing for more complex games with enhanced control schemes. The onslaught of VR FPS games doesn’t seem to be slowing down, meaning developers have to work harder to stand out amongst the crowds. 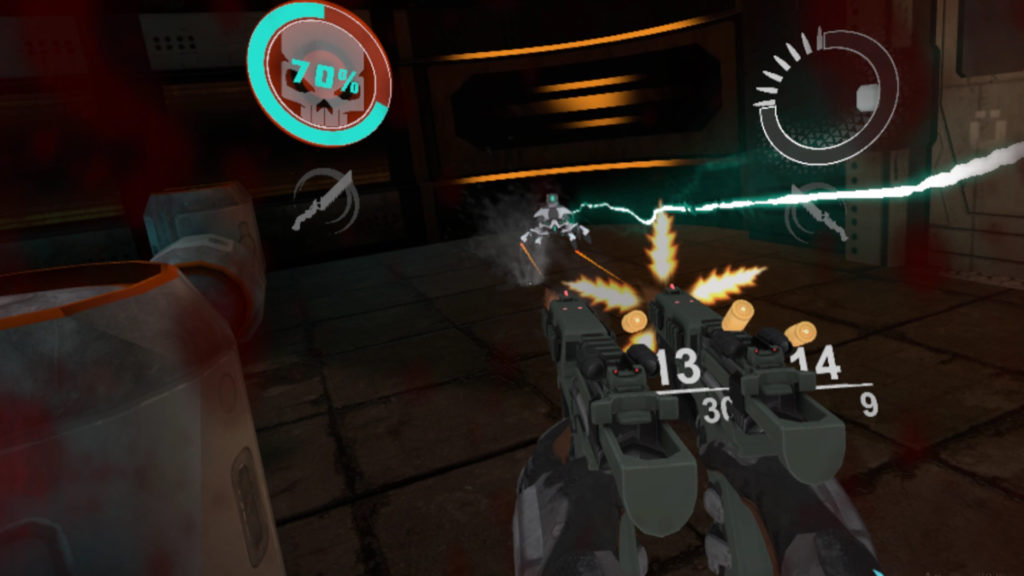 Dual wield your face off in the fast paced shooter!

Thankfully, Vindicta stands on its own as a solid shooter with great gunplay, pretty decent graphics and some nice unique gameplay elements, all wrapped into a lengthy single player campaign that encourages combos and fast action.

After finishing off a basic tutorial, you are thrust into level after intense level where you are forced to take on drones, robotic spiders, and a variety of sinister baddies waiting to be ripped apart by you and whatever weapons you pick up along the way.  Duel wielding is the name of the game; whether it’s an AK and a shotgun, two pistols, or the two swords on your back, the developers smartly decided to keep the weapon drops pretty consistent, allowing for you to experiment with new combinations to keep the energy level up.

If you’re into the combo/kill-stream system, knowing what weapons to utilize for various sections of the maps will help keep your energy meter full, allowing for a higher placing on the leaderboards the developers so wisely decided to implement into the campaign. This lengthens the games longevity, as it is currently only single-player, but with a multiplayer element coming soon.  Big colorful text for HEADSHOT or COMBOS pops up when you’re nailing them, letting you know when you’re doing something right.

The action is fast and furious as enemies often come streaming into the room in large numbers in the later levels, allowing for wicked headshot combos. The gameplay consists mostly of destroying robots, blowing up something in a room, and finding key cards to unlock doors. While not revolutionary, the developers manage to vary up the mission objectives enough to not feel like you’re on a time loop. Besides all the gun action, there’s a pretty solid climbing aspect, often used to scale walls or a ceiling to get to an otherwise inaccessible door. This system worked quite well, but every once in a while, I would encounter a bug where every new handhold I reached would actually shift me lower and lower until I could no longer reach the next one, but you can work around this. 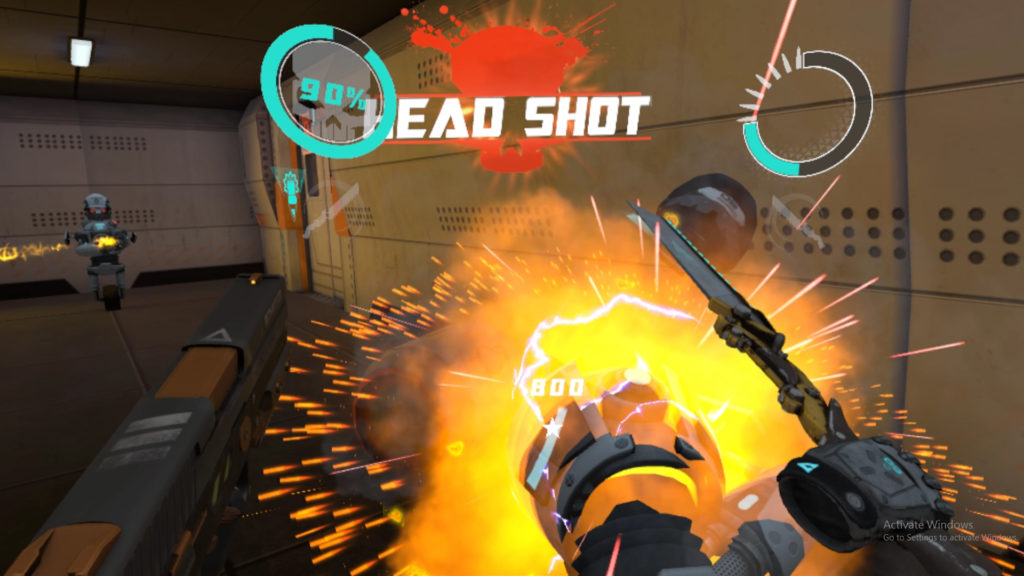 The one thing the game is lacking is some sort of story investment, it’s pretty basic and doesn’t really get much attention from the developers. It’s clear the focus was on the combat system and the pacing, which, thankfully, works great and helps keep the game moving forward at a rapid pace.

Graphically, the game looks pretty nice. The textures are very crisp and clean with everything in this game looking good. The level design is of a simpler nature, not over complicating with finer details, but this does allow the game to run smooth with no performance issues (that I experienced) and works within the funky robot universe the developers created.

There are multiple movement control options, including the “swing your arms to run” mechanic that is very well implemented, and a locomotion method by swiping on the trackpad. The game could really benefit from a “virtual joystick” style movement on the trackpad, as the swipe method never really felt consistent for movement, forcing me back to the swinging arms method to complete some of the busier missions.  The arm swinging makes for an interesting and immersive mechanic and is fun, but it becomes a little tiring after extended plays.

Finally, the game has a decent length, clocking in at around 6 hours or so and, when combined with the  quality of the production, is a top notch effort.  This is the developers first attempt at the FPS genre and is a fantastic effort, especially  for those looking for a fast-paced shooter with a lot of gusto.  The story isn’t anything super deep or complicated, but this game knows what it’s about and relishes in it. 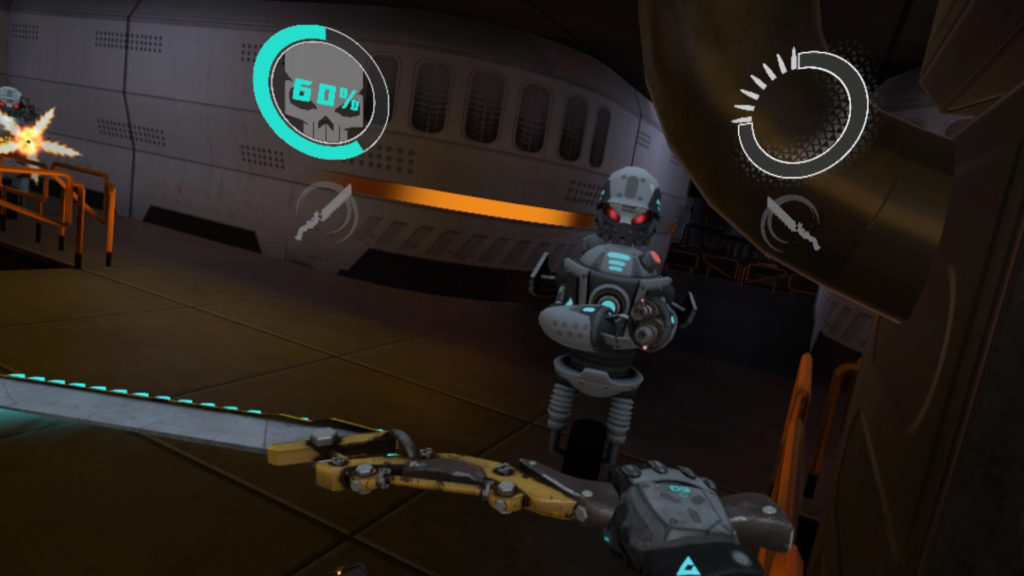 The sword play is just as satisfying as the gun play…GET YO HACK ON!!!

Game Cooks have put their heart into this game, and it shows. From the game tips on the loading screens to, to the multiple movement options available, they’ve really done everything they could to make the game feel polished and up to PCVR gamers FPS expectations. The leaderboards are a great touch, and the “MULTIPLAYER COMING SOON” at the bottom of the home menu should keep this game  going for quite some time.

What would I pay? Overall, it’s $15 price point is  decent for its value and that’s not even including the future multiplayer content. It’s not your typical FPS clone and I’m excited to see what the developers do next!

Game Cooks provided theVRgrid.com with a review code for this game and, regardless of this review, we thank them for that!