It’s a little odd to see a VR tie-in to a movie series with the last entry in said series coming 2 years ago.  Odd as it may be, I also think we need more known properties in the VR gamesphere and so when I heard Zombieland was getting a VR shooter, I was looking forward to it as I’m a fan of the films.   Headshot Fever looks to bring the R rated comedy and violence to our headsets by having us play through a series of ranked, competitive stages where your goal is to kill all the zombies as quickly and as accurately as you can. 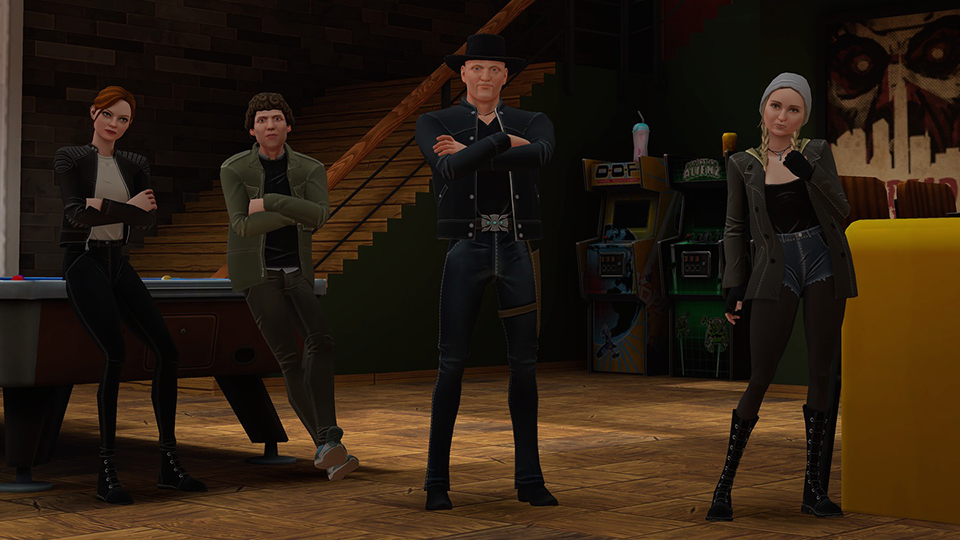 The emphasis is on speed in this one as each course is designed to be beaten in less than a minute save for the final challenge.  You start off with a pistol with reloading being handled by flicking the thumbstick down to drop the clip, then bringing that weapon to your waste to reload it.   It’s on the rails action in each stage so think of this like a ‘house of the dead’ type game on speed save for the slow-motion mechanic which actually helps you get through a stage quicker. Every successful headshot will give you a few seconds of slow motion and the more headshots you chain together, the longer that slo-mo lasts making it way easier to line up those cranium blasts. When not in a run you can enjoy the shooting range which has a variety of tasks with all the difficulties in either mode tied to a character from the films.  When not shooting stuff, you’ll be at your home base with each of the 4 main protagonists having their own station setup to either choose your next stage, upgrade your guns & abilities or view the games achievements.  The upgrade system will be key in getting those best times as you can increase the effectiveness of your weapons as well as unlock additional bonus weapons for your off hand though unlike your pistol, they have limited ammo.  How do you upgrade you ask?  By trading toilet paper of course, the currency of the apocalypse, which is earned by completing each stage and its bonus objectives with all of this leading to the Zombieland Invitational which has you in a course with multiple paths and a big boss to dispatch. 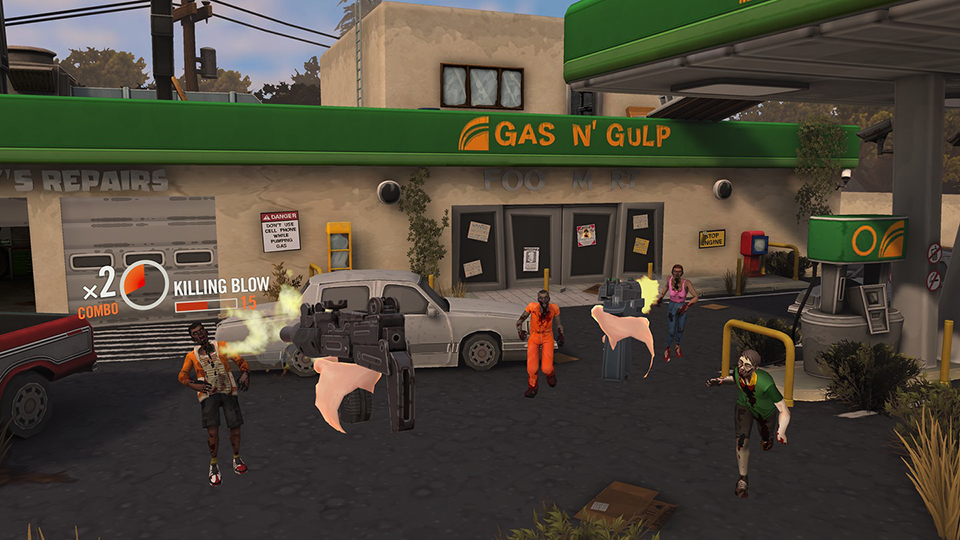 Head shots will save your butt in tight situations.

The vibe of the movies is captured quite nicely in Headshot Fever with the all the characters looking pretty close like their real-life counterparts.  When new zombie-types are introduced, giant text appears as part of the environment just like in the films with all the over-the-top gore you would expect from the franchise.  Unfortunately, outside of the people, little else in here looks good as the game opts for a simple cartoonish style with minimal textures and no lighting effects.  Some zombies look alright with others looking downright ugly and I don’t mean they are grotesque, but the simple texture maps for clothes as well their blocky shoes and overall poor quality just isn’t that fun to look at.  This is somewhat hidden by the art-style and that you should not let zombies get to close to you but when they do, they don’t impress.  Simple looking gore explodes out of the undead though disappears almost instantly make for a game that just feels very fast. Save for a few exploding barrels, the environments are static which is fine as the number of zombies that come at you and that ever-present timer will keep you too focused on headshots to take in any details or lack thereof.  Each stage is broken up by checkpoints with a clock popping up indicating if you are doing better or worse than your best run.  The missions do take you through a wide array of locales which is nice as each stage really did feel like its own.

The voice actors all do their job adequately enough with Abigale Breslin (as Little Rock) being the only actor from the films to reprise their role here.  You, as the fifth wheel, will get constantly berated by the troupe until you beat most of the missions with insults and compliments flying at you depending upon how well you are doing on a given run.  Guitar heavy rock tracks accompany you on each run though I really only noticed them when the guitars kick in after a headshot.  Thankfully, some of the jokes aimed in your direct will have an F word or 2 sprinkled in which nicely fits the adult humor from the movies. 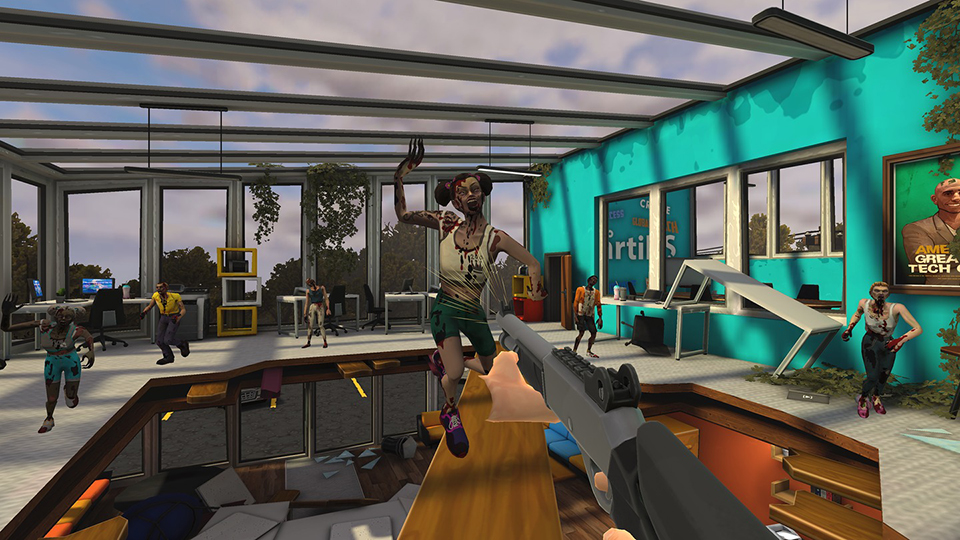 These ladies come at you fast!

For all intents and purposes Headshot Fever is little more than a fast-paced, on the rails shooter and despite my misgivings about the presentation, I had fun trying to complete SOME of the objectives and unlocking the invitational.  Those challenges range from simple tasks like shooting a specific item or not using your special weapon to near impossible ones like never missing a shot or chaining together massive combos.  Those are near impossible as the pace of the game is not only frenetic, but on occasion zombies will shift their position, shimmying left or right if they collide with the corpse of another zombie.  I’m sure they are possible, but I couldn’t be bothered to attempt those, especially on the more challenging stages. Chaining together those headshots and activating slow motion is very satisfying with each one also providing you with a chance to shoot at toilet paper rolls that fly out from a corpse after death for some extra income.  Health bars pop up above the zombies you shoot and are a constant reminder to go for headshots.  All that loot is spent on your armament save for the final stage which costs $100 to compete in so if you don’t have the funds, you need to revisit stages to accrue the cash.  Once I did conquer the invitational though, my drive to replay stages, upgrade weapons, unlock abilities and finish off challenges died a quick death. I’m not a score chaser so once I had seen everything there was to do, I was done so while the replay factor may be high for those who want to see their names above anyone else, I think for most of us, this will be at most a 2-hour romp in VR with very little replay value. 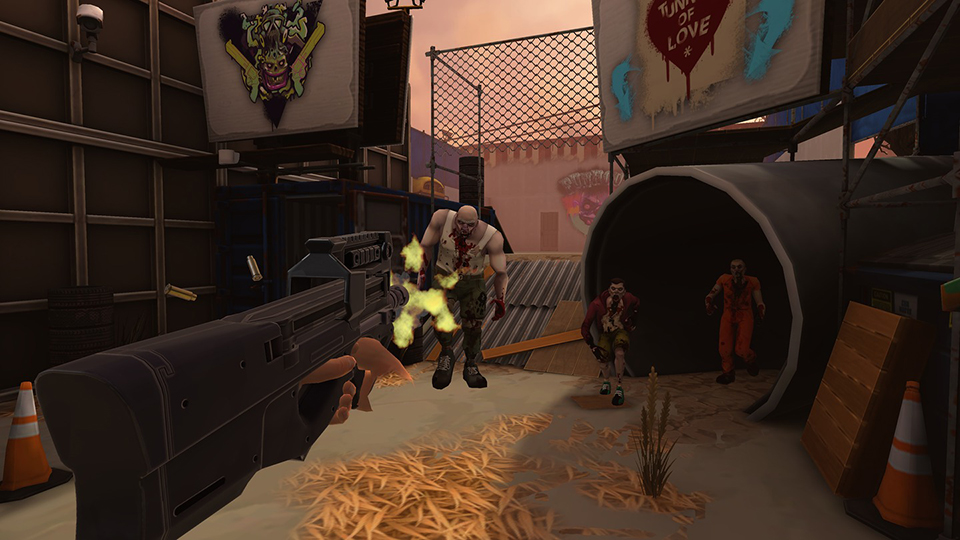 I enjoyed this for what this is but when looked at as a whole, there really isn’t a whole lot going on.  It’s fun to see the 4 main characters back, but they are little more than commentators during 1-minute zombie killing missions.  If you are a fan of light-gun shooters, this does try and mix that formula up a bit, but unless you are a hardcore Zombieland fan, I think most will get bored by this quickly.

What would I pay?  This is $20 US and that just feels too pricey for what ends up being a fairly shallow game.  I’d be way happier with a price tag half that value just based upon the lacklustre presentation and reliance on a lot of replay to get to that 2-hour mark and beyond. It’s fun, but it wears thin and is really geared towards leaderboard chasers.

XR Games provided The VR Grid with a press code for this title and, regardless of this review, we thank them for that!