3D platform/puzzlers are a rarity in VR with the genre largely being ignored yet still delivering gems like Moss or Theseus.  When games in this category are released, it’s notable as VR should, in this reviewer’s opinion, embrace all genres as almost all of them can benefit from the immersion an HMD provides.  Rinlo released late in 2020 looks to prove these types of games belong in VR, merging classic platforming action with 1st and 3rd person VR puzzles. 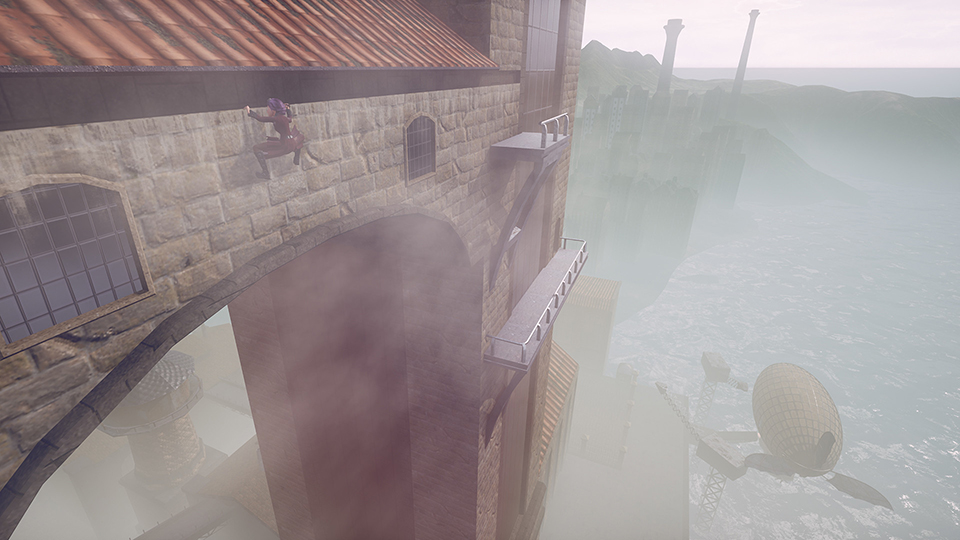 Climbing will be key in getting Agatha around!

So how this one works is the classic formula of moving the protagonist, Agatha, from room to room.  A series of events leads her on a quest to the mysterious island of Rinlo with each stage breaking up the key plot points in the game.  Using the thumbsticks allows you to walk Agatha around the map and included are duck & jump button along with her ability to climb along certain marked ledges allowing for some light environmental puzzle solving as you try and get to the next exit.  Switches found in some rooms move objects around which Agatha can use to get around obstacles with many doors and barriers blocked by 1st-person VR puzzles.  When you hit these conundrums, you’ll have to use your hands to solve whatever the game throws at you and it can throw anything from simple logic puzzles, memory tests, ball mazes and a host more.  I looked forward to these puzzles, but they don’t always contextually make any sense.  When you get to a machine and have to rewire circuits; perfect, but when you get to door and need to steer a ball through a maze it’s just weird.  Regardless, that is where the bulk of the harder puzzles lie though these never really get to challenging.  Agatha is no slouch and can create certain types of bombs and explosives she can use to distract and hinder the foes she comes across and if caught by any one of these bad guys, will cause the game to reset back to when Agatha 1st entered the room.  You are the stationary camera during the platforming sections of the game with one notably odd game choice being that there is no in-game turn option so following Agatha around the map will require you to sometimes turn A LOT in the real world so you’ll need a good swivel chair or play this standing, so you don’t crank your neck.  There are 8 chapters to get through with the game really taking no more than 3 hours at most to conquer and just to spice things are up hidden collectibles scattered throughout the game to add a little replay factor for those completionists out there. 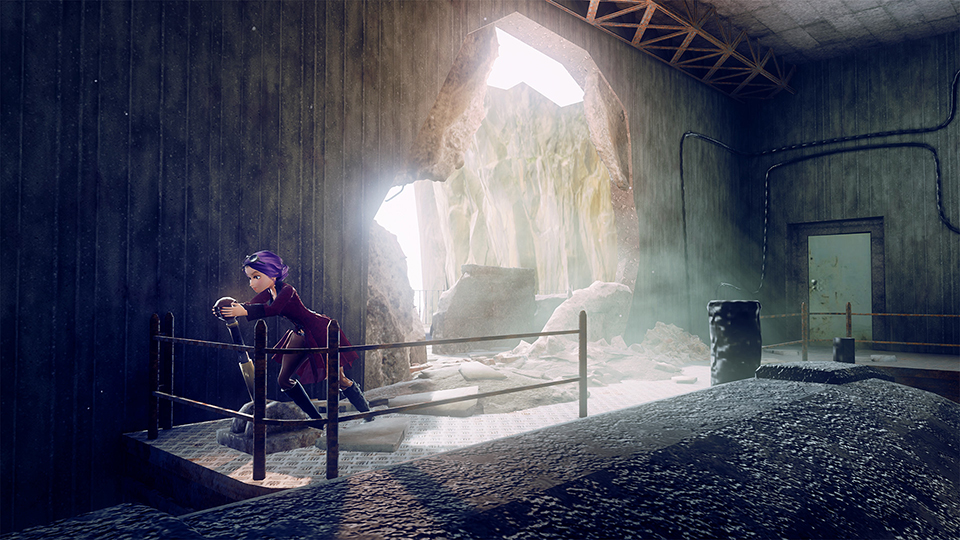 If you see a lever, pull it!

Rinlo offers up a steampunk world that takes place in a variety of locales.  In many ways it feels like this takes place in 1930’s type setting with smaller towns and less busy areas than is typical of the steampunk genre. These diorama type settings do make you feel like a giant though unlike other games in this genre, you as the VR player (despite your visible hands) have no presence in this world.  The worlds and rooms you navigate can look anywhere impressive and huge to tiny and detailed with fantastic lighting effects accompanying some very cinematic scenes.  Watching Agatha silhouetted against massive windows in a large clock tower as she scales a huge staircase or when you can see a huge lake with the level spread out before you really hammers home the efforts that went into some these stages.  Not all are created equal however with some of the later outdoor stages looking quite barren and just don’t have the details of the more intimate settings.  Each stage does feel unique so as you advance through each chapter that sense of sameness is somewhat alleviated, especially when combined with next puzzle Agatha stumbles upon.  Character animations do suffer from stiffness and while none look inherently awful, they lack the quality from larger titles with minimal environmental interactions.  Agatha is of course the largest victim of this as she floats on ladders and along walls though given the diorama nature of the game design, you’ll be hard pressed to notice the lacking collision detection thanks to your viewing angle and the scale at which you view everything. The levels can small, no larger than the interior of a small, dishevelled shack, to fantastically larger factories and city streets with a few NPC’s.  All in all, it’s a game that delivers the goods when it comes to presentation but belies its smaller scale roots. 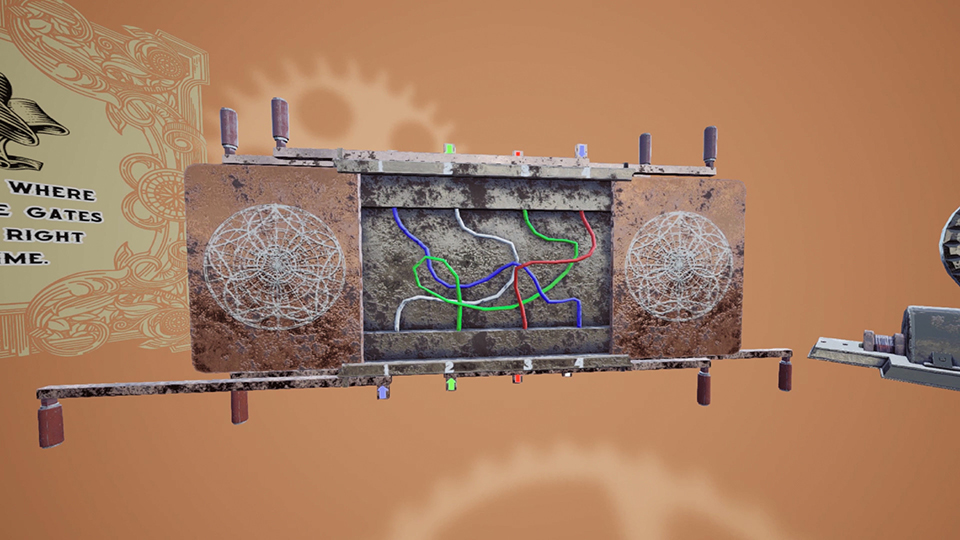 The first-person puzzles mic up the action nicely.

Agatha, and a few other characters you come across are fully voiced and while I do question some of the choices made in the voice acting department, no one does a terrible job and deliver their lines well enough.  3D audio is present though I didn’t really notice it except in the quiet scenes when I could take in the ambience a little easier.  Fitting, mostly subdued, music accentuates the necessary scenes and while I didn’t always notice the score, when it kicked in, it added to the weight of the events unfolding before me.

Rinlo is a solid enough title but it’s rough around the edges.  That bomb throwing mechanic I mentioned is tied to your right thumbstick and then pressing a face button to throw and is just awkward to use. In most situations, you are never rushed to react to the enemy so you can take your time planning your next toss, but throughout the entirety of the game, it never felt comfortable.  That explosive throwing mechanic is made largely irrelevant after the first few stages and I only, very rarely, needed to use any of those options as it was easier just to time my sprint from one door to another and flee from the enemies who couldn’t catch me if I stayed that course, save for the final stage.  Even the puzzle platforming felt underutilized as most of the stages are laid out with simple, obvious paths save for a handful of situations that require some lever pulls to move platforms into the proper position.  I’m not saying that’s an entirely bad thing as it does make for a fairly smooth experience, just one that didn’t offer much in the way of challenge…at least when it came to moving Agatha around.  In all honesty, this feels like Moss, just not as refined and minus the combat.  Granted those are big shoes to fill but with Moss setting the bar for what I expect out of these titles, when they come up short, it is noticeable. 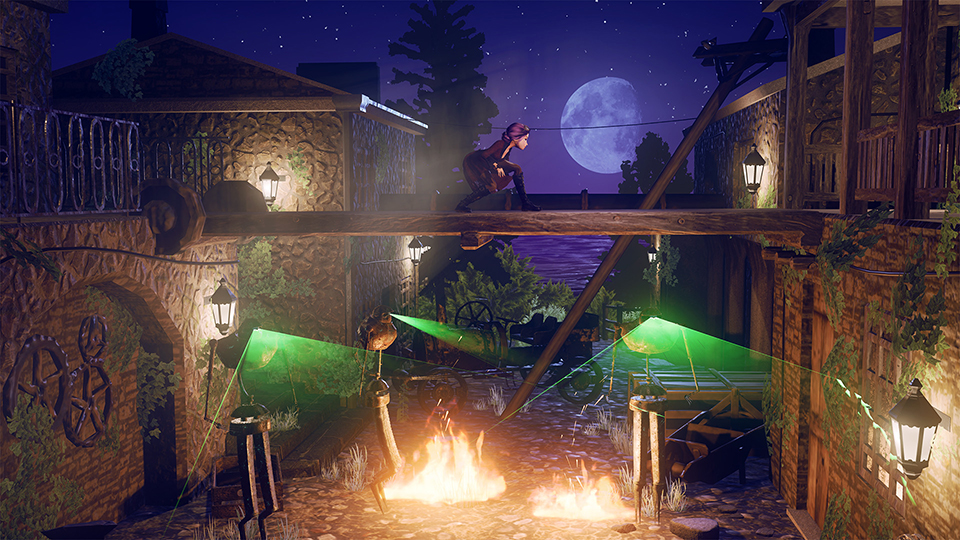 Careful the machines don’t see you.

Rinlo is a perfectly acceptable entry into this tiny genre and if you temper expectations, there’s a lot to like in here thanks to the engaging and charming story.  When you look at the game as whole, it has its faults but none ever ruin the game making for an experience that is fun but a little frustrating.  With that said, it delivers where it needs to, allowing me to recommend this, especially given just how few VR titles are out there that tackle this sort of classic gaming formula.

What would I pay?  Rinlo’s saving grace is it’s $15 asking price which allows me to be a little more forgiving of its missteps.  If you are looking for something outside of first-person shooter/brawlers than I think Rinlo offers up a fun and unique experience.

Gurahop provided The VR Grid with a press code for this title and regardless of this review we thank them for that!