Prepare to walk in the shoes of an unnamed Hero, now stuck in the Underworld as told of in Greek mythological tales.  Not knowing who he is or how he got there, you must unravel the secrets of your past with the help of a spiritual guide who aids you on your journey. 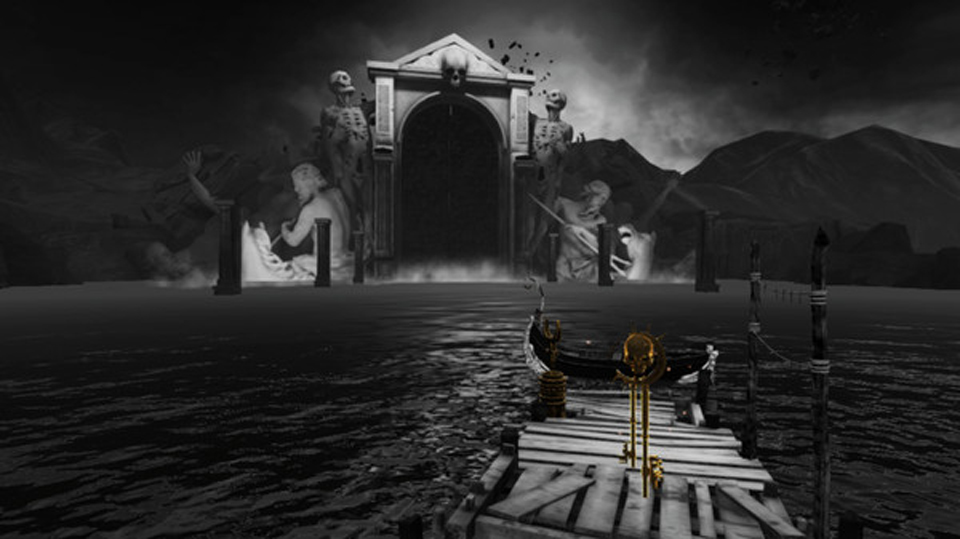 These gates aren’t so pearly.

This controls like any typical 1st person explorative title with a variety of comfort settings in place to tailor the game to your liking.  Journey for Elysium is more of a walking sim then anything else though there are some additional mechanics that do mix up the action.  Your adventure begins on a small farm and you are introduced to the games main mechanic of delving into your memories which appear as apparitions that you need to summon by collecting coins hidden nearby and completed by finding nearby objects that are linked to those histories.  Other memories may just appear as comic book type drawings, summoned by your guide and elaborated upon in great length.  Throughout the 2-hour(ish) campaign, you’ll have to solve simple puzzles involving moving stones to complete a pattern or following a select path through a perilous stone grid, Indiana Jones style.  You’ll also get a bow and arrow which is used to solve other puzzles typically by lighting fires with flaming arrows with a harp collected midway through the game needing you to play notes in a specific order to unlock your next path. Any items you pick up are automatically dropped into your inventory which won’t carry more then 3 items and is summoned with a press of a button, then grabbing the needed item displayed in front of you. Climbing and rowing a boat are also required of you from time to time and all the differing mechanics do a pretty solid job of mixing up the action and keeping thing feeling fresh. 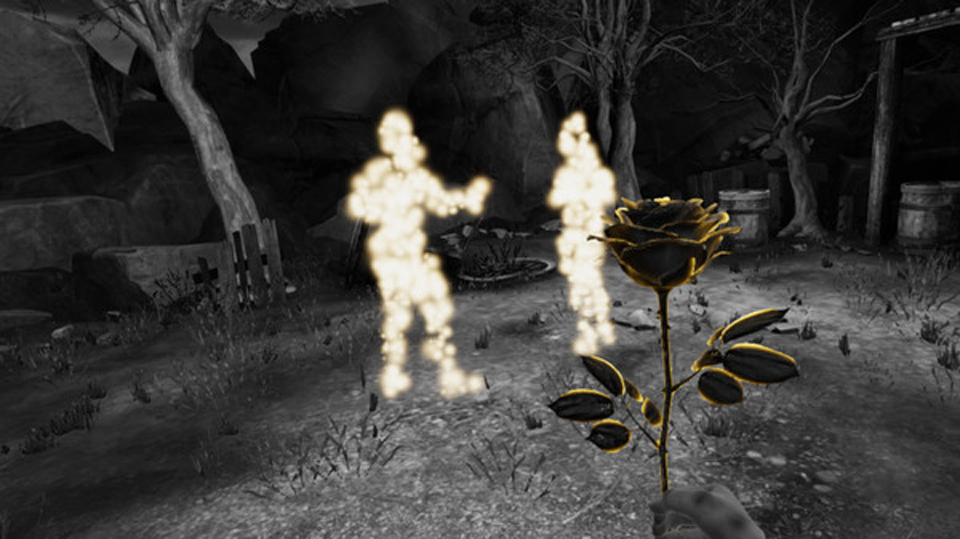 Complete these memories with special item.

Journey for Elysium opts for a monochromatic black and white palette with splashes of color, eschewing a macabre and sombre tone with some very surreal settings that remind you that you in the after life.  Grey and stormy clouds are a constant presence as are distant floating rocks and some very impressive mythological structures.  Huge looming gates surrounded by clamoring skeletons, massive godly statues, long winding rivers with the shores populated by lost souls all make this a lonely and sometimes disturbing experience.  Memories and needed items are a golden hue, allowing them stand out against the stark surroundings making them very easy to find but also helps push the narrative along at a steady pace.  The attention to detail is really quite outstanding though getting up close to anything will reveal less then amazing textures and geometry though by no means does anything look awful with the grandiose scale of some of these stages and backgrounds makes it easy to forgive any visual shortcomings.

The campaign is fully narrated by your spiritual guide and she does a great job of describing the pivotal moments in your life as you unravel how exactly you ended up in the afterlife.  You’ll encounter a couple other characters late in the game and while everyone does a commendable job, the pace at which the story is told can be plodding at times, especially when you are just staring a picture of a past event and during these long-winded moments, my mind did wander away from the words directed my way.  Those moments specifically occurred while on my little boat where I was forced to listen with little else to do. 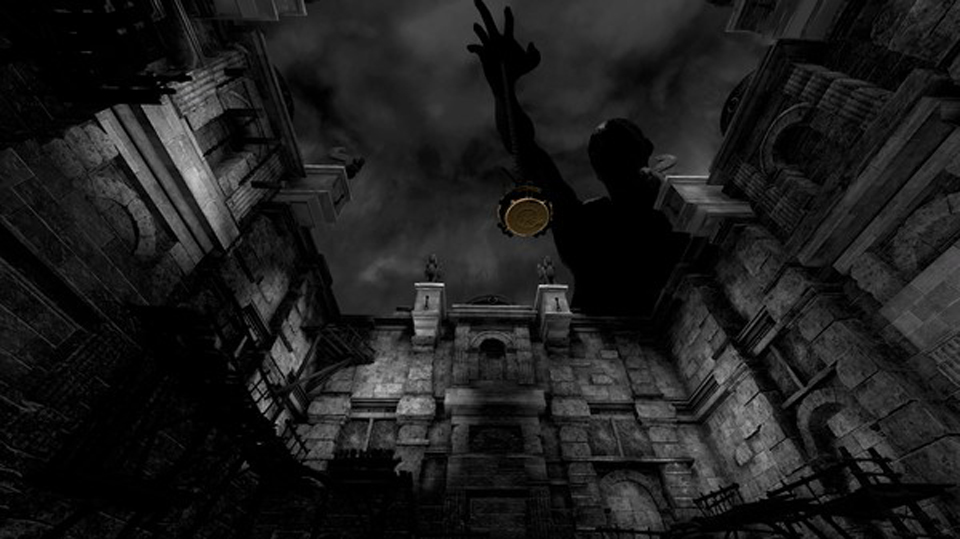 There are some truly awesome sights in this game!

The shorter nature of the game and the simplicity of the puzzles does make this feel a little more like an experience then a fully fleshed out game, but still has enough gaming elements to separate itself from titles labelled as experiences.  Any of the puzzles involving the archery mechanics I found to be a tad tricky as the bow and arrow just felt off when aiming though accuracy is very forgiving and only on 1 or 2 occasions did I struggle to hit my targets.  I also ran into issues with the harp as the proper wire would not highlight or right when I went to strum the note, the game would select the next line over causing some minor frustrations.  Nothing ever broke the game and the pace of the game is steady making it easy to complete in 1 sitting and the fantastical nature of your surroundings as well the very climactic showdown does makes for an engaging, if not simple VR title. 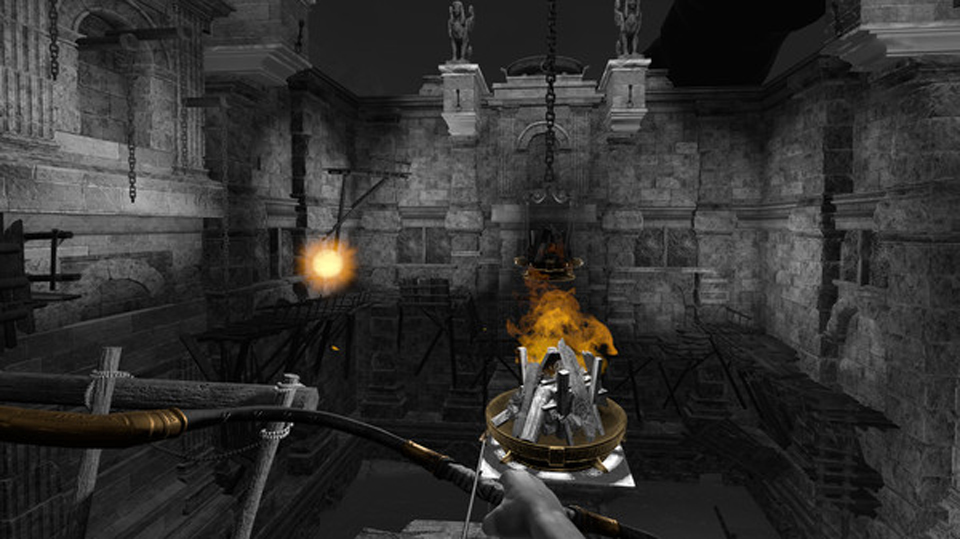 The bow puzzle add some nice physicality to the game.

Journey for Elysium is a narrative heavy experience with the puzzle elements taking somewhat of backseat to the story, though the 2nd half does shift focus much more on gameplay.   The wide variety of mechanics used breaks up any kind of monotony you might experience and is benefited by the shorter length as well.  The use of Greek mythology was a great choice and seeing just how the developer chose to interpret the legends presented here is intriguing in its own right.  If travelling through the afterlife and solving some puzzles along the way sounds of interest to you, don’t look past this little mythological tale.

What would I pay? This is a quality VR experience that delivers some impressive visuals, fun puzzles and an interesting, if not little to wordy story. $20 isn’t a crazy ask and I enjoyed my time traveling though the underworld.

Cronos Interactive provided The VR Grid with a press code for this title and, regardless of this review, we thank them for that!