Of all the shooters that we have had grace our headsets, few aim to be true simulations of their respective weapons, instead offering unrealistic scenarios or a focus on arcade action.  Gun Club VR tries to be the former, offering up cardboard cut out target practice with a wide assortment guns that can customized an altered to your liking as you play through a slew of increasingly difficult scenarios. 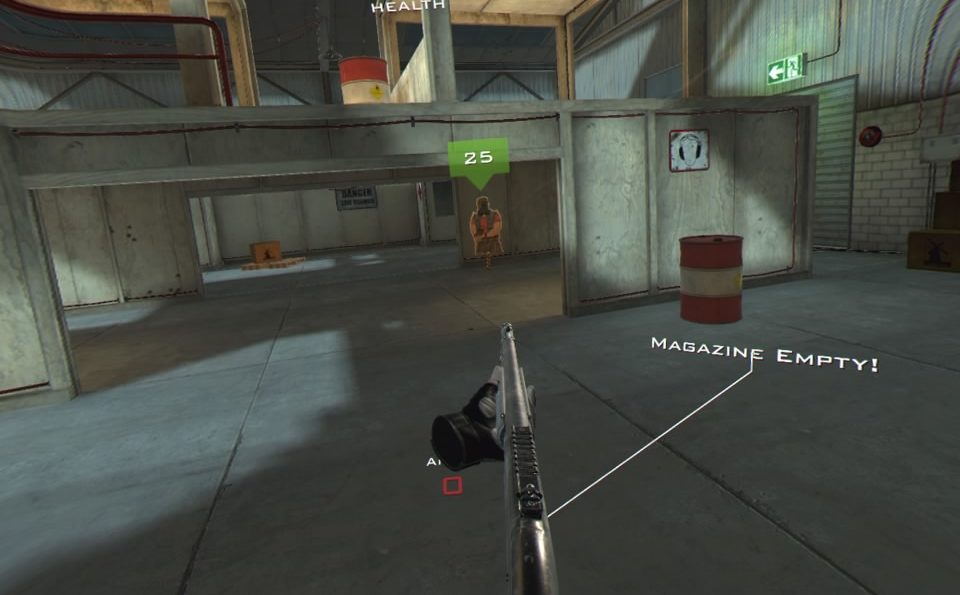 It’s time to get your shoot on!

It’s a firearms simulator and as such, your going to need a couple tracked motion controllers to handle your business.  Firing any weapon is handled by the trigger button and each weapon must also be reloaded, cocked and whatever other gun terminology applies to get those bad boys firing.  A simple pistol requires you to press a button to release the clip, grab the full clip from your ammo belt, placing it back in the gun and then pulling back the hammer(?) to finish loading it.  An assortment of modern-day shotguns, pistols and rifles are at your disposal as well as some retro and custom weapons as well, unlocked through purchases and completing mission objectives.  As you level up by completing missions, new scenarios are unlocked as well so you can play weapon specific missions, zombie levels, some “action” stages and even some WW2 themed one so the while action remains largely the same, the  next scenario and weapon you are using keeps the game feeling fresh…at least a little bit fresh anyways.  This is a simulation gun experience and the whether you play on the pc or PlayStation the game tracks really well with the exception of two-handed weapons which the PSVR struggled with causing tracking to go a bit haywire.  All the enemy targets appear in front of you and to the sides so all the turning is done in the real world and on either headset, I had no issues with tracking other then when I needed to use 2-handed weapons.  For the most part the game is played stationary though ‘Action’ missions allow you to navigate by waypoint through stages by simply pointing your gun at the next, highlighted areas. 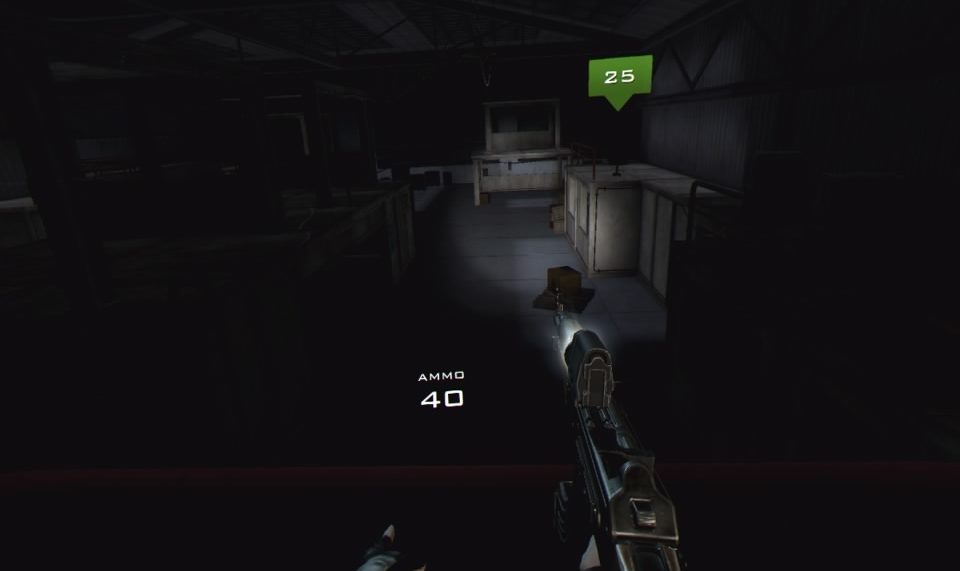 Gun Club looks really good, albeit simplistic.  There are only a handful of stages, but for ashooting gallery,  they are rather large so when you start a mission, you’ll probably start from a different point in the map then the last time making it feel a little fresh.  The stages are mostly of the warehouse variety but do change up during the allied missions when you play in some WW2 era ruins shooting carboard cut-outs of Nazi’s.  In fact, the only thing you’ll be shooting besides the bonus fruit hidden in each stage is cardboard cut-outs so whether it’s terrorists, Nazi’s, Zombies or just targets you are only shooting at life size cut-outs.  That may sound a little duller then it actually is as these cut-outs will pop up out of nowhere, zombies move toward you at a slow pace and any armed soldier actually fires back giving most of the game an intensity to get the job done quick lest you take a hit and lose some points.

Audio is alright with clear focus being on the sounds of the weapon in your hand.  Each one has seemingly been recreated to near perfection, so I suggest playing this with a set of headphones cranked to the edges of comfort.  Some generic actiony music plays during missions and as you level up and unlock stuff, your guide will pop in congratulating you on levelling up and few other random quotes.  It all works as it should and overall the presentation is solid. 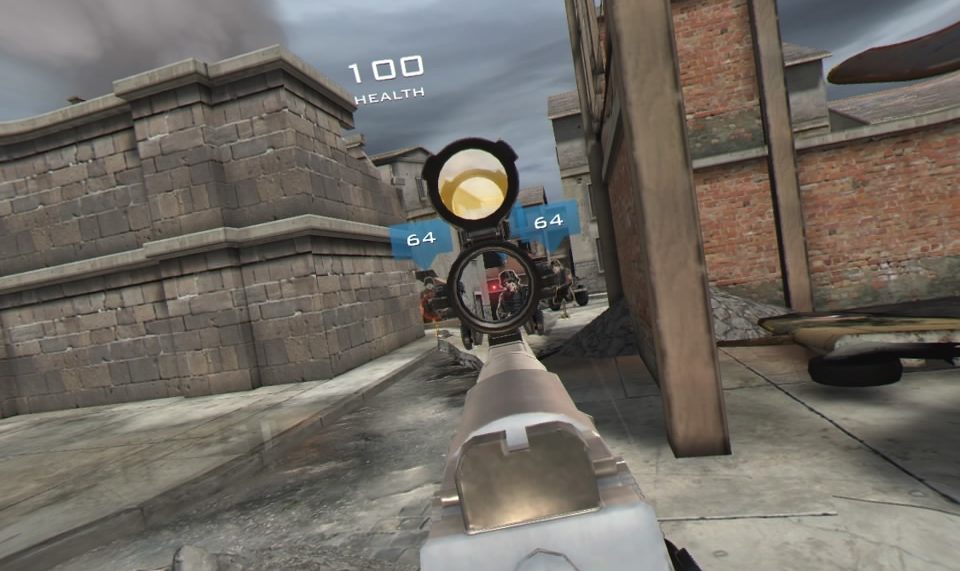 Magnified scopes are fun, but tricky with 2 handed weapons.

Every weapon you have has a host of upgrades as well as 4 loadouts each, so you can save them for specific missions.  Some missions will require a flashlight as the stages take place in the dark or at night and the core of this game is unlocking everything which costs money earned by completing missions.  Each gun has a bunch of attachments and options from increased ammo capacity, damage boosters, laser sights, grenade launchers and a few more allowing you to customize to your liking.  Like I mentioned earlier, 2-handed weapons are very difficult to use for any headset, but the tracking limitations of the PS4 make them a weapon I just avoided using in my play time.  Shotguns were a nightmare as the pump action to load them wouldn’t register as my Move controllers were basically lined up the camera causing 1 to block the other.  The same thing happens with sniper rifles with the added fun of both controllers being near your head and while I was more successful with those then shotguns, I was disappointed by the lack of option to offset that position.  I love sniping in VR and this seems to have done a great job with all the scope options available but tracking issues really held back the fun factor in those missions.  Still, with the multitude of gun options in the game, I had plenty of fun messing around with the other weapons. 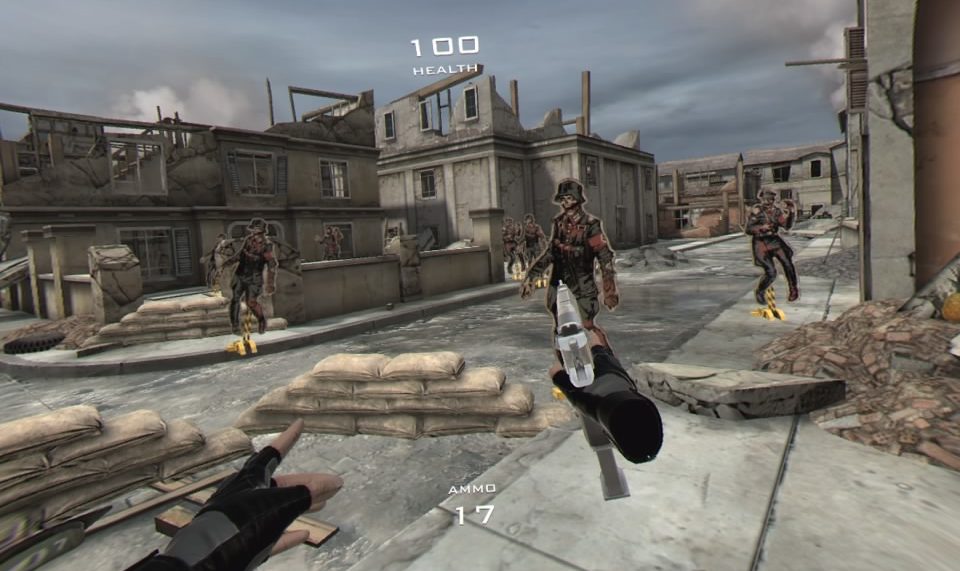 Gun Club VR is great at what it does, minus the 2-handed weapons.  There are hundreds of challenges, both weapon specific and your choice so you can tailor the fun to how you want to play.  I ended sticking with my Desert Eagle pistol and just upgraded that thing to the max putting on scopes, lights, new grips and turning that little bad boy into an everything killing machine.  The content is definitely here, though for me personally, I need a little more out of shooters then taking out cardboard cut-outs just to unlock more weapons to take out more cut-outs.  Still, the game offers a lot of challenge, loads of content and the simulation aspect of every weapon did have me having fun for way longer then I expected.

What would I pay? This is $25 and for “gun guys”, that’s probably a decent cost.  I couldn’t even guess how many hours it would take to wrap the games content but as I said, while it is fun it does get redundant to someone of my tastes.  $20 would be perfect in my opinion and every time I dived back in, I did have fun pushing my skills to the next level.

The Binary Mill provided The VR Grid with a PSN code for this title and, regardless of this review, we thank them for that.