This review has been updated on 09/02/2022 to reflect the Quest 2 release and the changes included in that version compared to the PSVR version.

For anyone who gamed in the 90’s there is ONLY 1 dolphin game that mattered, Ecco the Dolphin, and since that games release NO GAME has come close to delivering on as much porpoise filled goodness.  Well, now we have Jupiter and Mars, which has you guiding a pair of dolphins through a post apocalyptic version of Earth’s oceans, left polluted by mankind, with your task being to rid the waters of ancient, but still deadly, technology. 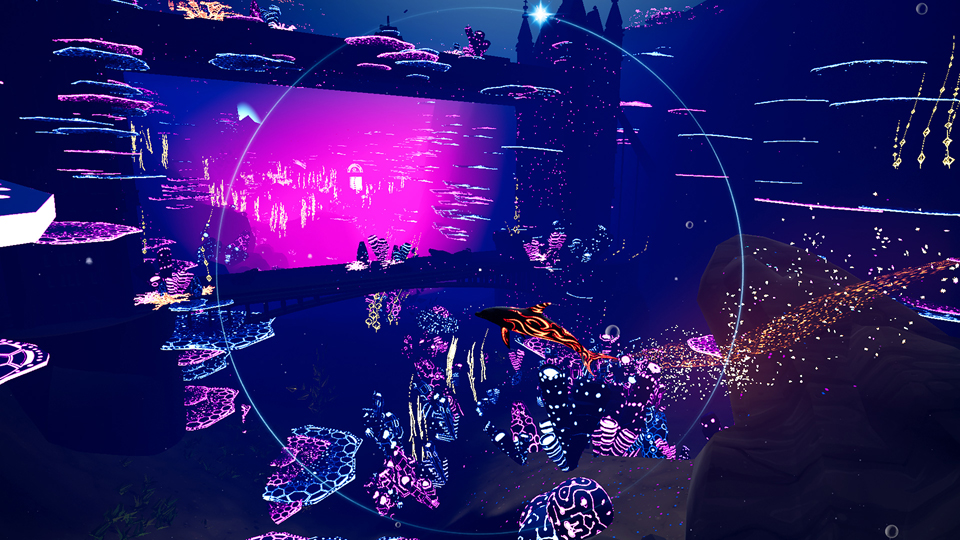 Some of the scenes in here are beautiful

On the PSVR, the controls are handled with the DS4 and allow for a couple options including navigation by button presses only or by headset tracking so where you are looking is where you are swimming.  That same control scheme has been translated to the Quest controllers allowing for easy control save for turning, which is extremely slow using thumbsticks with the game insisting on you to look where you want to travel.  You play as Jupiter, a dolphin with a sonar ability that highlights the environment and showcases objects of note with another echo-type blast that can push certain wildlife out of your way or trigger other animals into action.  You also direct Mars, your mate, to smash specific items & barriers or interact with them once you look at that item and press a face button.  It’s a dynamic that is used throughout the game as you explore the depths of the ocean searching for hidden items, animals needing rescue or new abilities that allow you to swim deeper or faster.  The Quest 2 version has seen some other minor improvements including a better way to find your next objective using echo location, an issue that does hurt the PSVR release, as well as currents that act as speed boost to aid in travelling through some areas faster.  There are a few more quality of life changes that are absent from the PSVR version which do make the Quest 2 version play a little better though these are minor at best with both games playing nearly identically.  Each stage is fairly large and typically tasks you with finding and freeing specific animals which may have gotten lost or caught in a trap of some type.  Once you stumble across machines, some light stealth mechanics come into play as well as interaction with consoles to shut down barriers and power down the enemy bots.  Death results in a respawn back to your last checkpoint, which was typically mere seconds from where I was before dying and overall, the game plays relatively smooth. 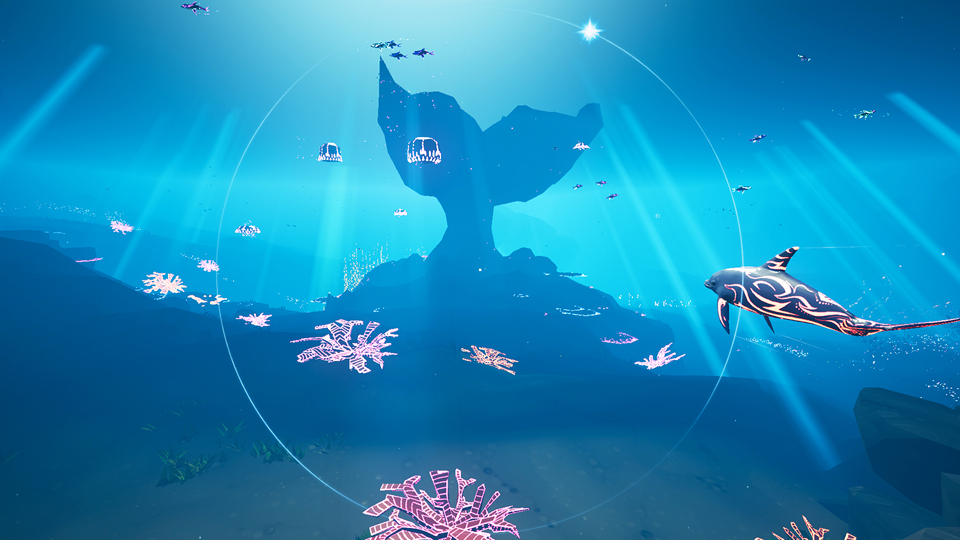 There are still some cool moments in here no matter which version you play.

The PSVR version looks good but suffers compared to the flat version of the game thanks too the blurriness associated with the aging HMD and some texture downgrades, though what is here can still look striking at times.  With the Quest 2 release, that blurriness has been removed with many of the textures being replaced to get the game running on the stand-alone headset though that also comes at a cost of environmental lighting & effects.  Initially it’s all about natural beauty but as you advance through the campaign, remnants of humanity show up in the form of sunken cities and wreckages from monstrous vessels.  As this is the dire future, the polar ice caps have melted submerging much of what was once above the surface which gives us some very cool set pieces to swim through like parkades, construction sites and so on.  Active technology keeps wildlife at bay, pulsing energy that can kill you in one blast, so caution is often the best course of action when you hear the thrumming of machinery.  Whenever you use your sonar ability, the world lights up for a few seconds in Tron-like fashion which reminded me much of games like Blind and Stifled when in darker sections where you couldn’t see very much naturally.  The large-scale levels promote exploration with hidden areas usually revealing some cool post-apocalyptic visuals or cute little pocket of nature.

Bouncing back and forth between both Quest 2 and PSVR versions, I was surprised by just how much better looking the console version is.  The loss of many ambient effects and lighting and reduced texture quality for the stand-alone version really had me missing the more natural looking beauty of the PSVR despite the steep drop in resolution.  I don’t mean to slag the Quest 2 version as, considering the platform, it still looks good and I suppose if you don’t know what you are missing, then you’ll probably appreciate the game’s visuals more for what they are than they aren’t…but in a game that relies quite heavily on exploring and taking in the environment, I feel like the Quest 2 version just doesn’t deliver the visual experience that makes many of the areas of this game so mesmerizing. 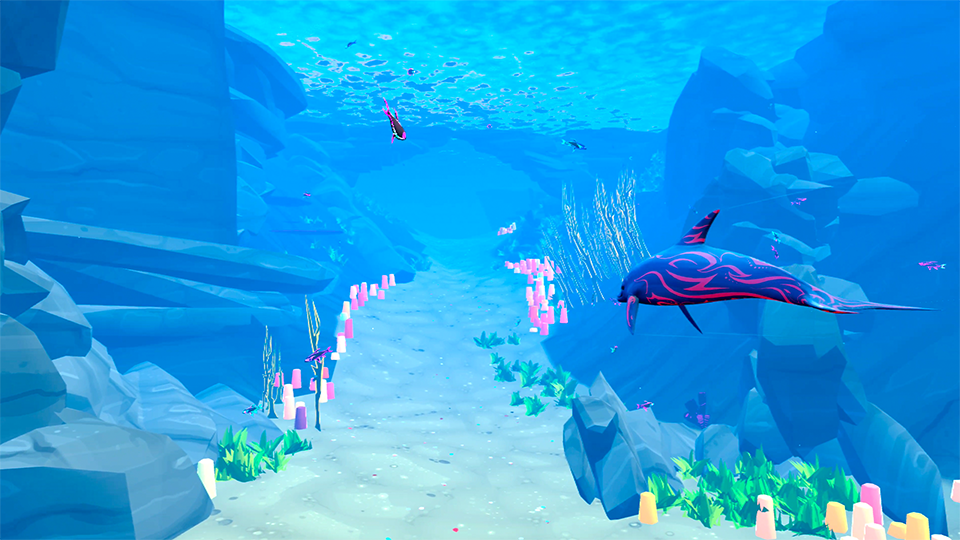 The Quest 2 takes a visual hit, but it still looks alright. (Quest 2)

The depths of the ocean are relatively quiet with ambient noises, the swooshing sounds of Mars and yourself swimming as well the sonar blasts whenever you decide to use them with the machines breaking that calm with strikingly mechanical outbursts.  The music accompanying Jupiter and Mars is the star of the show with super friendly, national-geographic-esque orchestral tracks mixed with a bit of sci-fi playing throughout the campaign.  More intense action music kicks in during some encounters and while the songs do repeat the longer you are in a stage, they never once bothered me and fit seamlessly with whatever was happening. 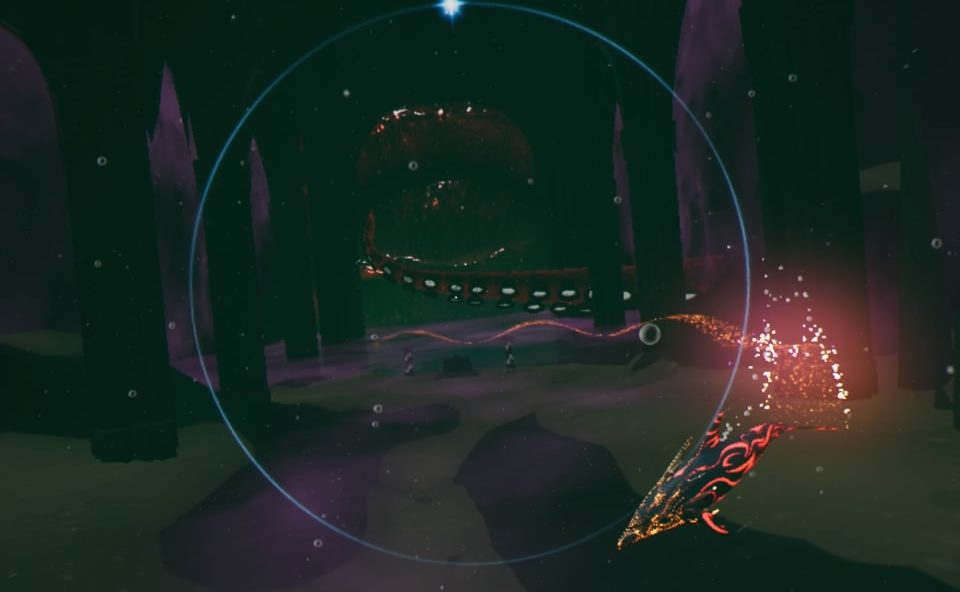 Besides the campaign objectives, each stage has a few hidden items to find, but some cannot be accessed until you unlock the abilities needed to bypass the obstacles blocking your path.  This Metroidvania style mechanic extends the game time by unlocking new areas, but if you have no desire explore, it’s not necessary.  Completing just the main story will take about 4 hours or so with the bonus searching easily adding many more hours to that.   Initially I was fairly intrigued by the oceanic world and my tasks, but after the 2nd level, destroying the machines became rather monotonous as it’s the same strategy every time; see a machine, avoid its blasts, look for and destroy the power source and move on.  A late game boss battle against a monstrous sea creature was incredibly underwhelming with the final level breathing a little life back into it thanks to the mythical settings you visit.  The head-tracked motions reminded me a lot of Eagle Flight and while it works in large expanses, getting too close to the scenery could result in some awkward adjustments to correct yourself.  Visiting the menu list all the areas and items you have found (and are still missing) and you can also view 2 videos from the game’s benefactors highlighting 2 causes trying to help our oceans today as well links to their respective websites. 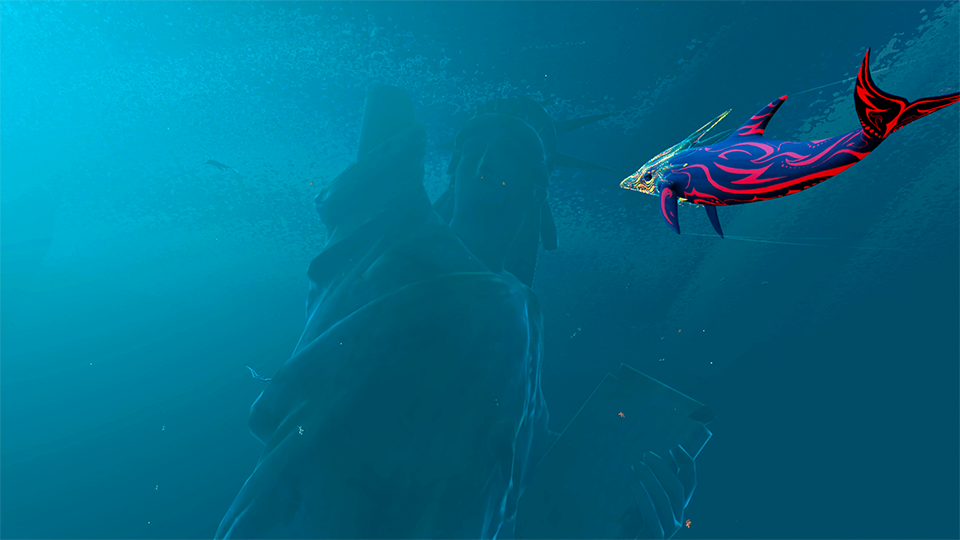 Its not post apocalyptic until you see this lady in distress. (Quest 2)

For all the cool visual moments (on PSVR) and occasionally fun gameplay, Jupiter and Mars commits one of entertainments biggest sins in just being rather dull.  That’s not to say it’s bad and does have some cool VR moments, but what this game boils down too is a repetitive formula for dispatching machines and item hunting, the latter of which is largely there to extend game time.  The story told is minimal but does the job at getting you from beginning to end and it is still fun to swim around the ocean, just maybe play through the game one level at a time and take a break in between.

What would I pay? Jupiter and Mars sells for $15US which I think is a solid price, especially when a portion of the games sales goes toward the programs mentioned in the options menu.  It has some issues for sure across either platform, but still provides enough satisfying moments to make for an entertaining campaign.

Tigertron provided The VR Grid with a press code for this title and, regardless of this review, we thank them for that!