Atomic Ghost Fleet is a VR experience and centres on the Bikini Atoll, which is located on a remote chain of islands in the Pacific Ocean.  These were a testing ground for atomic bombs over 75 years ago and this edutainment title goes into quite some detail through its narrative, sending the viewer underwater to investigate the historical world of shipwrecks and sunken relics and discover the testings’ long-lasting effects.

The experience is not interactive other than taking in your surroundings and environment in a 360 degree video as your explore the ocean and watch interspersed videos detailing the crew of the Alucia and its research.  As well as being able to view the video through the PSVR, it is also compatible with a 3D TV and appropriate glasses. 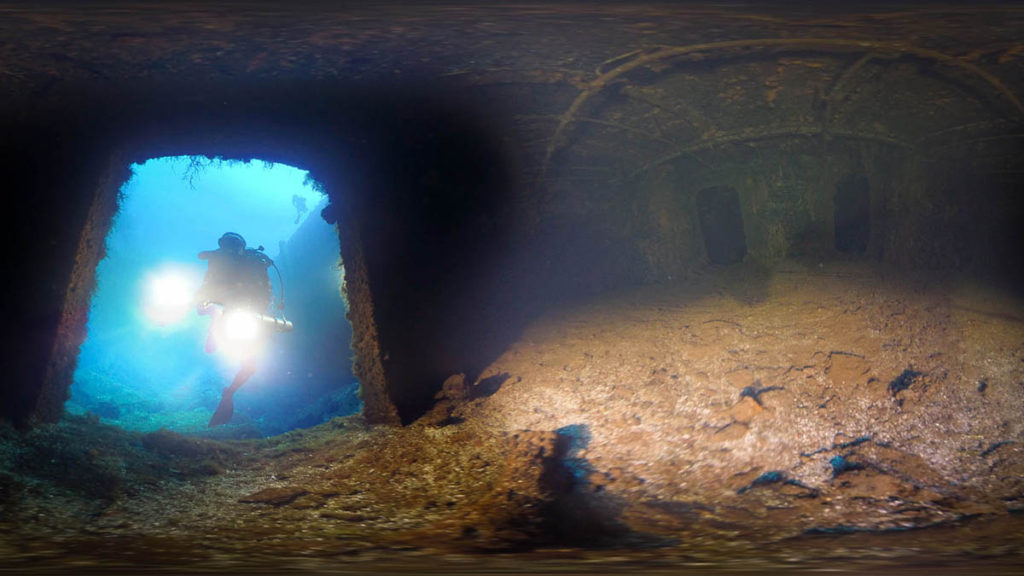 The exploration parts of this vids are definitely the highlight!

Although the documentary is fairly entertaining and interesting, unless you are fascinated and have a good interest in the subject matter to begin with, then it does get quite boring as the video goes on. This is mainly due to the slow pacing and not nearly enough ship exploration; rather there are numerous centered smaller videos showing archived footage and static screen shots. Improved presentation and editing would have increased the appeal and drama. Having said that, there are some genuinely eerie moments as you journey through the sunken warships, but the title would have benefited from more of this.

The videos themselves are low in resolution and very grainy in places although the majority of the footage is smooth and judder free, there are some screen tearing which can be a bit hard on the eyes. It’s also just a 2D 360 video so a lot of scale and immersion has been lost because of that. Viewing the documentary on a normal TV felt very similar to viewing through the headset so the effects of VR haven’t been fully utilized.

Coming in at just 18 minutes long, it’s also a very brief affair with little inclination for repeat viewings.
The voice narration is very well done and professional and does give a very informative insight but only a die-hard historian would most likely get the full benefit from the experience.

What would i pay? At £3.69 it’s a very expensive 18 minutes. If your passionate about the subject matter then it may warrant a purchase at this price but otherwise it would have been better as a free video on LittleStar.