I used to say I wasn’t much of a puzzle game guy. Sure, I enjoyed light puzzle elements in games like God of War; and I liked playing mobile puzzle games like Monument Valley, but mostly I’d say I didn’t have the patience for the genre. After playing Shadow Point on my newly purchased Oculus Quest, I firmly believe I’ve not been paying close enough attention to these types of games. 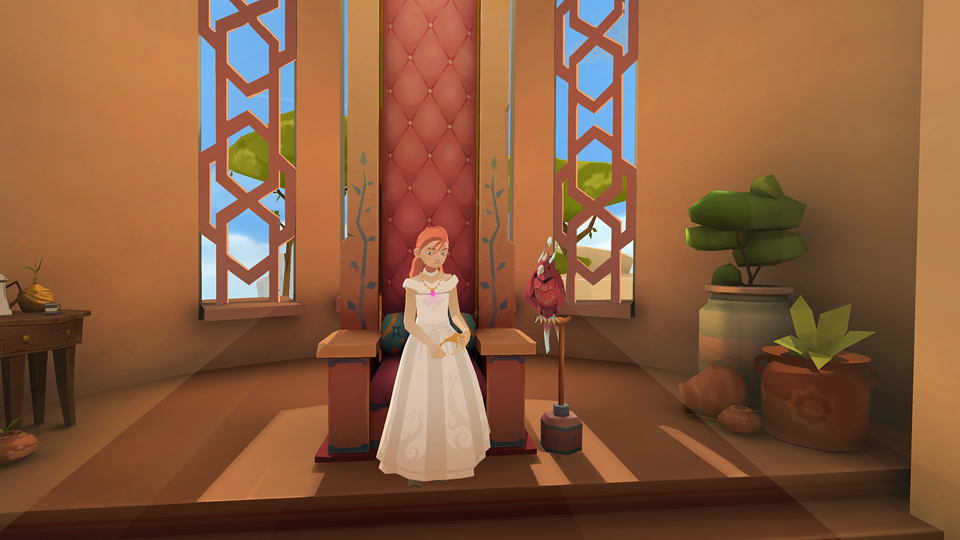 The art style looks great in the headset.

In Shadow Point you are Alex McCabe, off on an adventure to find your sister Lorna McCabe, who has gone missing after a natural disaster. The story is subtle, and you learn small details through piecing together bits of information gained both from characters in-game, and through the voice over dialogue from Sir Patrick Stewart’s narrator character. You might think his voice would become distracting, but the subtle performance he gives, along with the sparing use of the narrator allows the player to feel immersed fully in the world. As the story progresses small story question are solved, but in turn create more questions. Small bits of time travel, time displacement, and seemingly magical apples all play into the narrative in ways that feel clever and earned.

The bulk of the gameplay revolves around the manipulation of objects in front of light to make their shadows match outlines on the walls. It sounds simple, too simple, but as the levels progress more and more elements are added to add layers of complexity. One such element completely changes objects in your environment, while other puzzles involve mirrors that can have objects passed through them while your reflection hands you something completely different. This simple yet difficult style allows everything to feel solvable, while not being instantly apparent. Both teleportation and stick movement are choices here, and comfort options like movement speed and vignetting are possible. It’s nice to see them catering the game to everyone. This is a game I could see my puzzle loving mom playing, but also my FPS loving brother enjoying as well. 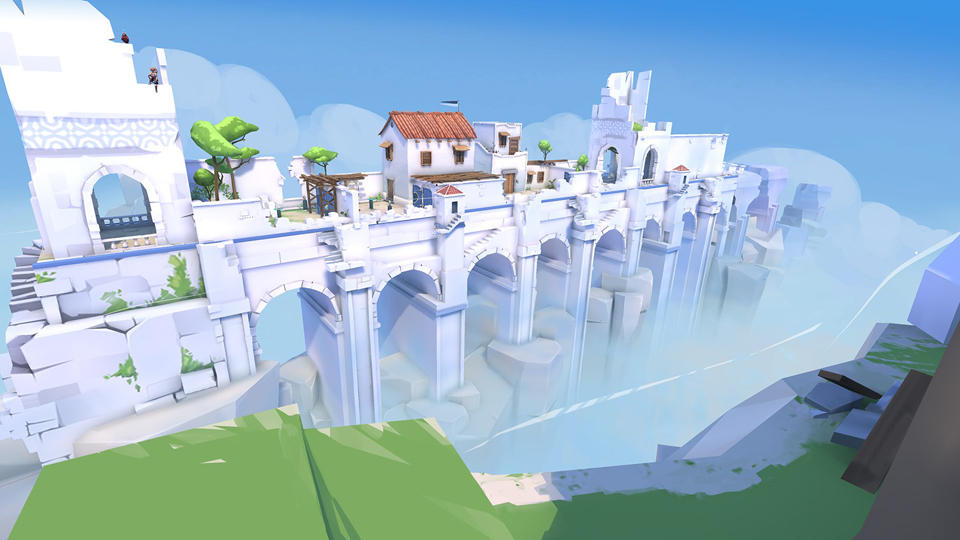 The puzzle and stage designs are fun

In each level there are optional “moon puzzles” to complete which give you something to come back and play after you have beaten the game. Some of the more complex puzzles are also worth coming back to, as they have so many moving parts it is unlikely you will be able to have the solutions memorized.

At no point while playing did I feel frustrated to the point of quitting. There were a few instances where I just felt plain dumb, until I backed away and tried to think of the puzzle from a different angle. There was one moment where I had to stop playing in the middle of a difficult level to go do real world things, I turned my headset off, and went about the rest of the day, all the while thinking about the solution to the puzzle I was stumped on. That night I woke up around 3am having DREAMT the solution to the puzzle. That morning, I tried my dream solution, and it worked! The point here, is the game really worms its way in to your head if you let yourself become immersed in the world!

Visually the game looks like a more refined and detailed Rec Room, and sort of like Windlands 2. Everything was pleasant to look at and despite the graphical limitations of the Quest I felt fully immersed. I would assume when the game is released for Rift it will be equally appealing, if not more so. Colors really pop, and the world is colorful, unlike some of the drabber color palettes that are common in more recent games. Lighting is key and well managed, which you would expect in a game that is all about casting shadows. 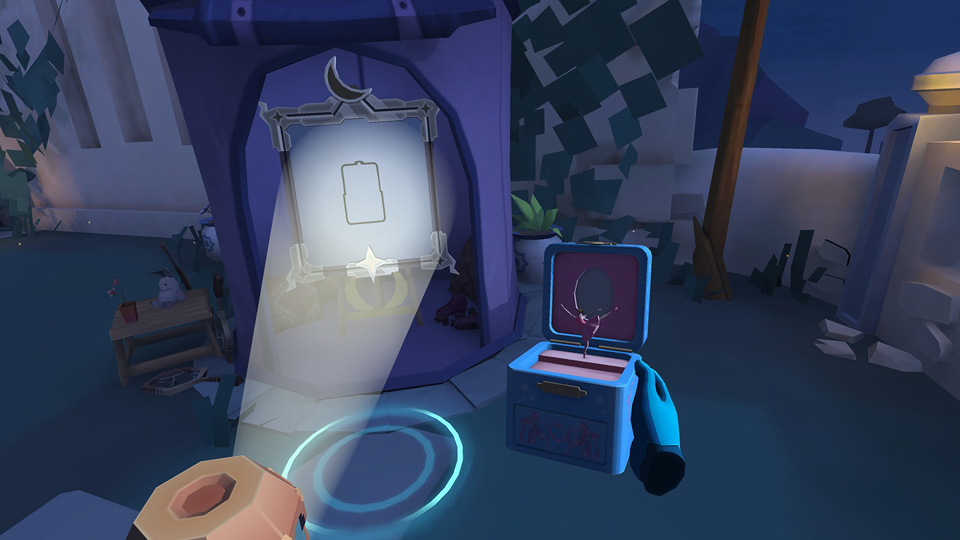 As the puzzles are light-centric, the lighting effects are great.

The audio in game is great as well. The music is subtle yet beautiful, and the few “cut scene” type scenes in each level have sufficiently dramatic yet relaxed music to help set the mood. Sound effects feel realistic and non-cartoony. And of course, the voice acting is superb. All the characters feel real, and of course Sir Patrick Stewart’s voice overs are top notch. It doesn’t sound like he phoned this in, which was my original fear whenever I hear big name actors are attached to games.

My biggest complaint about this game is the lack of multiple save files. Puzzle games are meant to be shared with others, and the lack of multiple saves is a disappointment. Sure the first 2 chapters are easy enough to get through again if someone overwrites your save, but after that the puzzles are way more complicated and it’s going to be annoying redoing several levels to get to back to where you were if you want someone else to try out the earlier levels. Not a deal breaker, but something that could be easy to implement (says the person with 0 game dev experience). It would also be nice to have a chapter select menu after you’ve beaten each level, so you can go back and replay specific levels if you want, directly from the main menu. 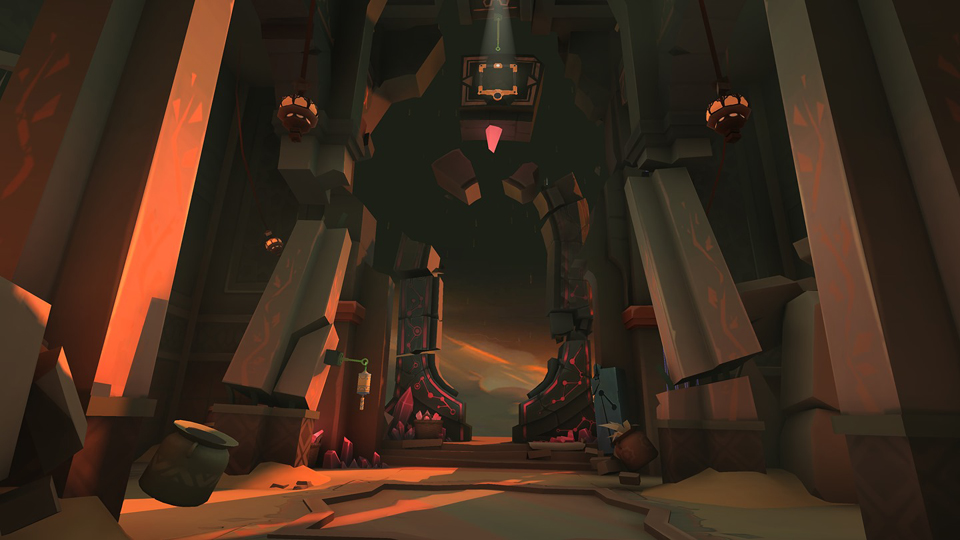 Things get a little surreal

Shadow Point on Oculus Quest is a great testament to what a puzzle game on a tetherless VR headset can be. I wasn’t getting tangled in cables turning around while solving puzzles, and it let me fully think about the puzzles without worrying about the real world. Simple graphics create a beautiful world, but are ultimately in service to the puzzles, as it should be. The game was designed from the ground up to be about solving the mysteries and puzzles without getting dragged down by game padding or uninteresting ideas.

What Would I Pay: I would pay the price tag of $20 again, no questions asked. The game plays great, and it feels like a very polished experience. There are enough hours of play here to justify the asking price. VR has its killer puzzle game, and I can’t wait to see how game creators build on these ideas in the future.