Down down down the rabbit hole we go. Alice VR is created by Polish game developers Carbon Studio. It’s a good stab at the VR story genre and I did have a few WOW moments while playing. There’s much to be desired from Alice VR, most of all something makes you want to come back to play it. 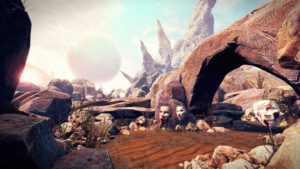 Some of the environments are both familiar and surreal.

The games I like the most in VR are the ones that make me feel like I’m in a totally new world. Alice is for sure one of those games. You awake on a derelict spaceship and there’s no one around and you need to find fuel to continue on your journey. Lucky for you there’s a creepy and weird abandoned planet that you’re orbiting. Coincidence?

The game has an excellent premise which leans hard on the Alice in Wonderland story, where the lines of reality and fantasy are blurred in a bizarre and very trippy sort of way. It reminded me of a really easy version of Myst. There’s too much moving around in this game for my taste and backtracking really destroyed the pace of this game. I can certainly see this being a great experience for some users. It’s just not my kind of mad tea party.

The scope and effort that went into this game is very noticeable and commendable. There were some major weird moments for me which were very cool and equally weird. This is an “actual” game though, where as most VR content is an experience or a combination of mini games. There’s a story here, there’s a design of the game from start to finish and there’s a mystery to uncover. The big thing I found lacking in Alice was fun. I did not have fun at any point in this game. I was intrigued but I mostly found myself grinding through this game just to finish it for this review.

I’m also not a fan of how this game was designed from a developer’s point of view. I get that this was not meant for your grandmother to play. It’s for a very specific type of VR user. Alice is more about story and exploring a whole new world and less about fun, relaxation and ease of use. The visuals are supposed to be the best part of this game, but I can blame the Unreal engine being used in the earlier stages for the lack of visual quality. The earlier versions of Unreal, especially when this game was released were much less capable of showing high quality graphics versus what it can do today.

The graphics are trying to be great but they’re just not there. I don’t think there was a consistent art style in Alice. Going from inside a space ship, to outside, to inside and back again was jarring and I would argue somewhat pointless. VR and exterior environments aren’t going to get along, looks wise until the next round of VR hardware comes out. The graphics unfortunately are also the best part about this title and I think that really demonstrates how this game missed the mark.

There is a unique mechanic where you shrink or grow in size to interact with the environment. That’s when I had my ah ha moment as to why the game is called Alice VR. It was the most interesting part of the game but it did not feel good to be standing still while the camera moved to make you feel tiny. I am very much against sim sickness in VR so that’s a big reason why I am not comfortable recommending this game.

There is however a lot of content here. A five-hour game with lots of story line, pick ups and puzzles to solve. Some of the puzzles were annoying but for the most part I didn’t mind them. I did like the design on the puzzles in the majority of the game and I compliment the developers for their creativity in designing them. 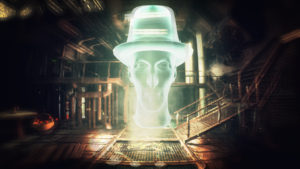 Overall, if you’re into stories and playing a more traditional console style single player game, then  this is may something you might like.  Be aware though that the controls weren’t great and I think that you will most likely feel nausea while you play this game at some point. I certainly did not feel comfortable playing this game and that’s a big reason why I can’t recommend it. I am however very much looking forward to seeing what Carbon Studio comes out with in the future. I am sure they have learned a lot from this game and will be looking out for their upcoming projects.  Overall I would say there’s something here, but it just wont be for everyone, but to the right VR user this could be a decent option. I am just not one of those people.

What would I pay? I really think this is a $10 game.  For $27.99 I’d suggest waiting for a sale and only picking it up if you REALLY love story based games.

Klabater provided theVRgrid with a review copy of the game and, regardless of our score, we thank them for that!