Full disclosure on this one, I’ve never played Psychonauts.  It’s just one of those classics I’ve never got around to playing.  With that said the franchise had now come to PSVR and I’m diving in head first into this game series! 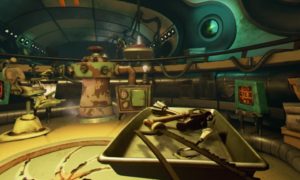 Throughout the whole game you almost never leave this room….or do you?

Apparently taking place right after the previous games ending, you control Raz, a Psychonaut whose telepathic and telekinetic abilities will help you navigate through the 2 hour or so campaign.  As Raz, you are stationary though the game, but your ability to body hop allows you to navigate from person to person (and creature to creature).  The game starts you off with all of your abilities on full effect, but certain story elements neuter and supress some of your powers until later in the game.

What all of this means is that this plays very similar to Escape Room puzzlers, but with it’s own unique twists.  Tasked with finding one of your cohorts’ lost father, you proceed through a series of puzzle rooms all in an effort to rescue your compatriots, unlock your powers and maybe save the day? The puzzles themselves range from very simplistic to complex, especially with the ability to jump around a room inside bodies, but it all works.  Especially when you include the top notch, stylized visuals.

This game looks good and Double Fine has gone out of there way to establish very unique characters and a gaming world.  The models themselves are hyper exaggerated and comedic looking and the world around you can be both small and massive, but the attention to detail fully puts you in Raz’s shoes and you can’t help but appreciate what is going unfolding around you.  The environments to are actually kind of amazing and while most puzzles take place in concentrated areas, navigating through the ocean in between these stages gives us some pretty sweet eye candy.

The audio as well is top notch with some great voice acting and a solid comedic script.  As stated, I haven’t play Psychonauts, but after playing this, I want too.  This game oozes charm in the best ways possible, though a few jokes did land pretty flat.  It should also be noted that as this is a sequel the characters often refer to event s from the 1st game and at those times I was well aware I was missing the joke. 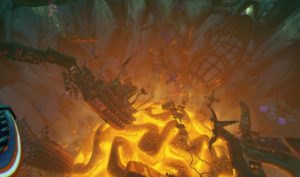 Some of the oceanic views are absolutely amazing!

Once you have unlocked all your powers you arrive at the end game level and with the conspiracy being fully revealed along with the games completion, there really isn’t any reason to come back.  I’m not saying it’s a bad thing, it’s just a one and done kind of experience.  Unfortunately the puzzles here only have one solution unlike something like I Expect You to Die(review here) so while the game does offer some challenge, it does feel very linear.

As a mini-sequel I think it will scratch long time fans itch for more content, as a precursor to the upcoming Psychonauts 2, it does pique my interest into the franchise.  This is fun stuff and the light humour attached had me chuckling a few times and that’s never a bad thing.

What would I pay?  $10 is a bit better.  The experience can be beaten in less than 2 hours and with no replay value I feel that $20 is a bit high.  With that said though, I still enjoyed the game and if you like puzzles, this game does offer unique elements to escape room type games.