Starting this game up, you’d swear this was a mobile game (it is on the Gear VR, but that’s not quite what I mean).  The stories introduction is told through a slide show with alien robots stealing Penguin eggs and it’s up to you to rescue those eggs through 40 levels of puzzling fun.  Sound familiar? Thankfully, the premise is all this game has in common with other Mobile bird based games. 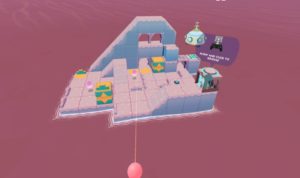 The levels may look small and simple, but as they game progesses they get really complicated.

Utilizing the DS4 controllers, you manipulate the environment and obstacles to allow your penguins to collect the missing eggs and guide your fowl friends to the Spaceship waiting to pick up at the “end” of the level.  Trigger buttons change the viewing angle of each island you are viewing while the rest of the buttons serve to trigger levels obstacles and the levels themselves, or cause your penguin to dash.  Penguins only turn to the right so their pattern of movement is predictable, though depending on the level size and how many penguins you have, it’s easy to lose track of them.

With 40 levels to play through, there is a decent amount of content here, though most levels will only take a few minutes at most to figure out.  Only 2 levels in my play through took around 8 minutes to complete, the rest were typically 3 min or less.  The story is minimal, but the games pacing is great as just when you think you’ve mastered all the level variables, the game introduces a new one.  Play through a few levels, pack it away and come back another day is probably the best way too play.

There isn’t much in the way of replayability here, other than topping a previous high score or going back to levels where you may have missed an egg or 2, which I did.  With that said, if you are a perfectionist than this is the kind of game that may drive you insane as one mistimed button press could add a whole lot of time to a level while your penguins navigate back into the correct position.

While the visuals do the job, they aren’t anything to exciting.  Taking the route of many budget titles, Waddle Home uses cartoony visuals that, thankfully, have a lot of polish.  Some ambient snow effects and a few other subtleties add to the game and the gameplay as well.  The audio is of the cutesy, friendly variety and does the job.  A few sound effects sprinkled in to clue you in on the action and a cutesy single track plays over every level, but never really bothered me.

The few problems I had with Waddle home weren’t game breaking, but did annoy me on more than one occasion.  The PS Camera seemed really picky with positioning and I often found that my controller drifted on screen until I moved into a better position.  Secondly, it just seemed to easy to rotate the levels faster than I’d like, forcing corrections that caused me to miss my window to trigger the next obstacle.  The last issue I had was when penguins were close together or near items, the game seemed to have a difficult time with choosing what I was pointing at, causing penguins to dash when I didn’t want them too or trigger an object I didn’t mean too.  All minor annoyances, but in game based on completing a level as fast as possible, they were irksome. 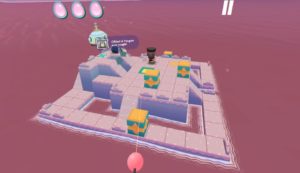 When enemies pop up, the difficulty ramps up!

All of this boils down to a solving relatively simple platform/puzzle levels by manipulating the environment to guiding your penguins to freedom and glory.  It’s small experience that any player should crush in less than 2 hours, but it’s just challenging enough to keep you coming back for more.  My biggest complaint here really is that I want more.  More levels, more complex puzzles and more objects to manipulate.

What would I pay?  $10 is perfect pricing.  Kill a few hours, have some fun and play with your brain a bit.  It’s fun!