“Hack the Planet!”  Alright maybe not, but if you have ever seen “hacking” performed on movies or on television than this is going to fit in perfect with what how you think it’s accomplished.  This is a puzzle game putting you inside the net as you hack CPU’s, taking them over node by node until you control everything before you. 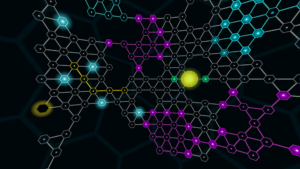 If you are looking at this image and thinking….’hmmmm, that looks interesting’ than this is probably the game for you.

The base of this game has you hacking into individual nodes and using viruses to destroy sections of a node, giving you money when you successfully hack a node which allows you to unlock more viruses and other goodies to assist you.  Hacking a node involves strategically placing viruses to destroy defenses and get your virus to the core. Essentially you are placing bombs that must spread far enough to destroy the nodes internal defense systems.  The games difficulty ramps up as you try and hack more difficult nodes, indicated by their payout.  The idea is to take over every node in a level including the core and move on to the next, procedurally generated level.

Controls are handled with the standard controller and by just looking around.  Simply highlight that which you wish to interact with and press X.  It works just fine and you’ll master the controls soon enough.  The one issue I had is that item switching must be done from the store menu which is way more convoluted than it should be.  Assigning your hacks to the D-pad seems like a missed opportunity to help streamline gameplay.

There is more to this game than what I listed above, but barely.  Larger nodes have virus protection and other defenses, but are rendered irrelevant by other unlocks/cheats purchased in the game. So you play through a node or 2, unlock enough stuff to shortcut your way to the last node, which does require some skill in bomb placement to solve.  And that’s about it.  If you’re a fan of puzzles, you’ll definitely find some joy in challenging yourself to solve as many nodes as you want but the repetitive nature of this game hinders any kind of long term joy.

Visually I would say this game is super polished, although incredibly simple, using some generic shapes and simple effects to make for a very crisp, but minimalist experience.  The dev admitted inspiration from ‘Tron’ and that inspiration is clear enough.  Navigating through the same visuals, just in a new order does make for a repetitive experience.   It’s stylized for sure, but does carry with it a polish that is very rare in many games.  Also, the design here has you almost stationary for the whole game (minus a few scripted animations) so sim sickness shouldn’t occur here at all, for those that care about such things. 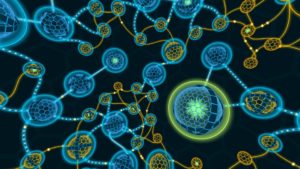 Audio is the same, it lends itself to the gameplay but essentially becomes just background noise to the puzzles placed before you.  The tutorial is voiced by Duke Nukem!(alright the actor, not the character) and he provides the necessary instruction to teach to you the basics as well as give a ‘You can’t do that’ type message when you try and use the wrong hack on a node.  It all works and once again carries a polish that lends itself to the game overall.

Ultimately this is going to come down to whether you’re into puzzles or not.  There is a lot of content here with stages getting larger and more complex, requiring more exact choices and strategy in choosing which nodes to attack. I could see an addiction factor here for some, but at the same time, this may be a half hour experience for others as they move on to more exciting titles.

What would I pay? $10 at the most and even still that’s pushing it. I had fun, but it wore out it’s welcome after an hour or so. If you love puzzles and strategizing than there is a lot of content here for you to sift through. For casual gamers though, I think you’ll get bored long before you get to the games end.