Space Pirate Trainer has been 1 of the most highly recommended VR Wave shooters since its release all the way back in early 2016.  In that time, it has seen refinement and new content that  make it the lauded title it is today.  Quest user get access to the DX version of the game which not only gives you the full SPT experience but adds a new 30’ square room scale game mode that changes how this game is played.  I will summarize the single player experience below, but for a more in-depth look at that content, check out my review HERE. 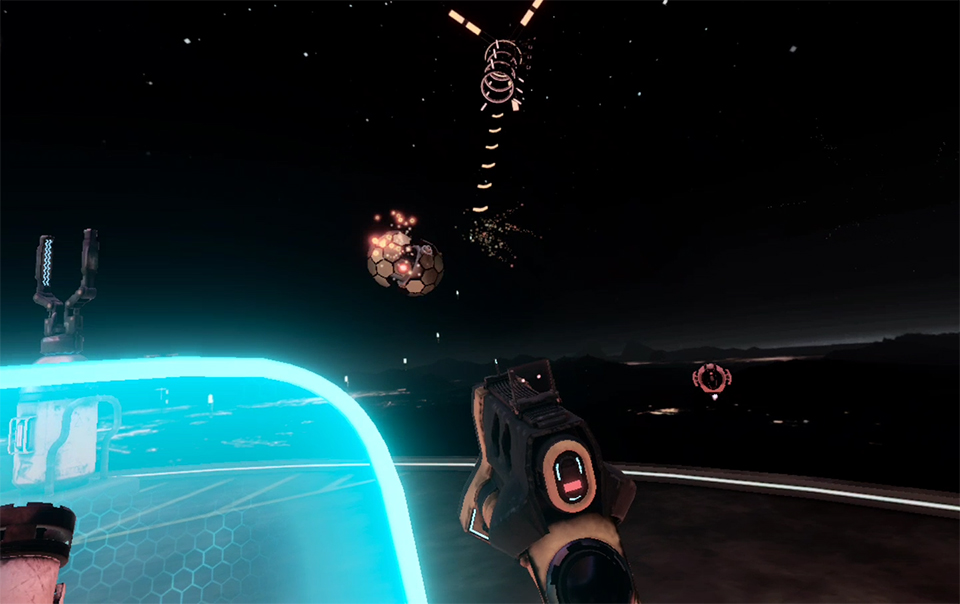 Take out the robots as fast as we can!

For the single player portion of the game, you can dual wield pistols, each carrying a variety of ammo types you can switch on the fly like a pistol, revolver, shotgun and laser which are tailor made for the variety of enemies that come at you.  Reaching over your shoulder swaps the gun for a shield or laser bat(?) which can be used to block incoming fire or activate 1 of 4 turrets nearby which launch different attacks with your final boon being random generated power-ups which can aid your efforts.  When enemy blasts get too close to you, time will slow down allowing you to gather your bearings, dodge or block and respond accordingly.   There are 4 modes of single player play available, each offering different modifiers to make it easier or harder with your score being adjusted for the difficulty you play on.  Part of the DX update is VERSUS mode, a multiplayer version of the solo game where every time you shoot a droid, another one (or two!) will appear attacking your opponent with the last survivor winning that competition. 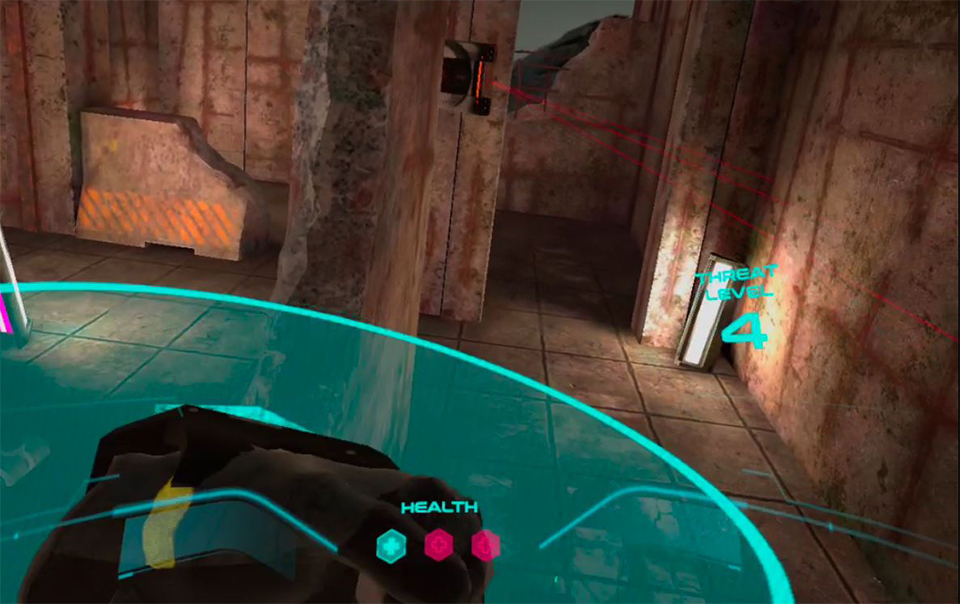 whether playing single or against another player, Arena mode is next level VR!

The room scale multiplayer is a next level addition that changes the game entirely as you now have to physically move throughout the environment.  Setup for this can be tricky as the maximum space allowed by the Quest is basically a 30’ square so there’s no tricking the game into starting in a smaller space… trust me, I tried.  Even turning off the guardian via developer options will not work so if you want to play, you need the space.  Once you set that up though, it’s fairly easy to jump in as you are placed in a lobby and can play against bots or setup an online match.  It’s only 1 v 1 if you go that route and playing online is as simple as inviting a friend who will join you in that room.  The host can pick 1 of 5 maps, whereupon each player stands in their respective teleporter, and you are off.  Currently the only vs game mode is the 1st player to get 3 kills wins with no customization options to speak of aside from skins for your weapons, which is disappointing as depending upon the round, those 3 kills can happen quick.  Each player starts at a specific point on the map with both players armed with a standard pistol and energy shield which need to be recharged if on too long or hit.  If you end up in geometry, your vision will be filled with a hex-like barrier, and you’ll be unable to fire until you adjust your position.   Once there is a winner, you can replay or go back to the lobby, pick a new stage and go again.  What this ends up turning into is a kick-ass game of 1 v 1 laser tag as you run around the map trying to take out your pal.  Oh, and should those 5 stages not be enough for you, there is a level creator mode that lets you carve out new stages and add spawn points allowing for near infinite variety when it comes to level design.  Playing against bots has you facing harder and harder opponents the more you kill until you eventually get overwhelmed. 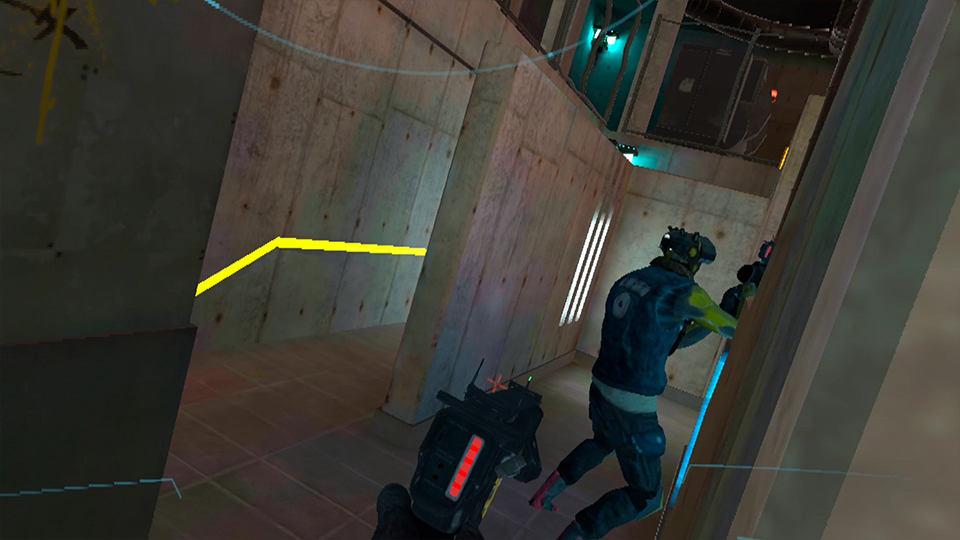 Stealth kills are next level in Arena mode!

Space Pirate Trainer looks great with simplistic, but striking visuals.  For the single player mode, there are only 2 different stages to choose from, which don’t affect the game, just the aesthetic but both look good.  Robots rise up in front of the platform you are on and come in a wide variety from simple small drones to larger enemies with each behaving in a specific pattern.  Visually, the multiplayer mode does feel a little stripped back thanks to lacking environmental lighting effects, but it still looks damned fine.  The avatars animate wonderfully instantly giving you and your friend a near tactile presence in the game and even when you are running around, ducking or moving in awkward ways, those avatars emulate your real-world motions like few other games.  The multiplayer stages are really nothing more than thematically changing walls, barriers and layouts, but each theme looks great and even the distant visuals are solid, making the overall experience here an immersive one.  The sound is also spot on with some high-octane techno tracks to get you in the butt kicking mood and on-point weapon effects that are flawless.  When playing multiplayer, you and your pal are both on live mics so it’s easy enough to talk trash to each other. 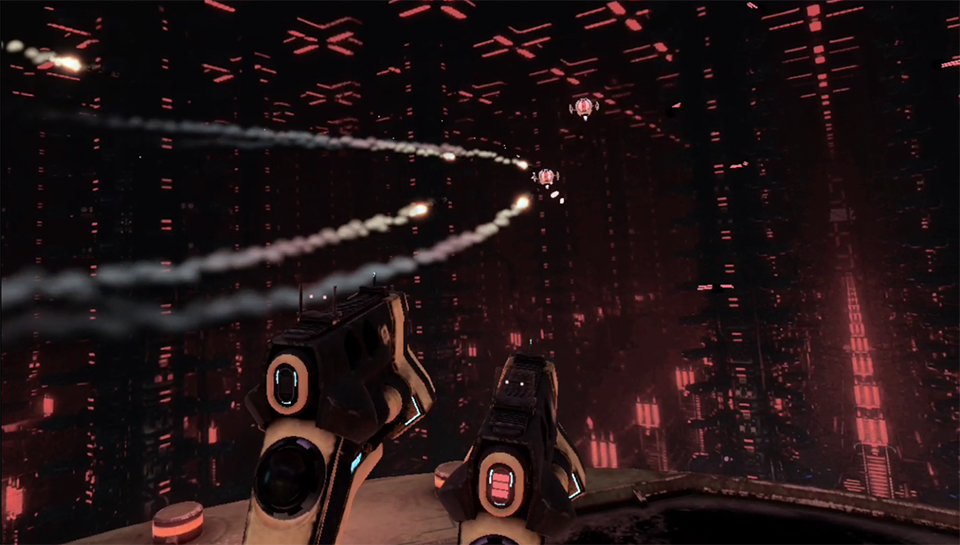 Space Pirate Trainer DX is a near perfect arcade style stationary wave shooter offering intense action typically in short bouts.  There is no storied campaign to speak of, just pick a mode and see how far you can climb up the leaderboards.   The addition of the roomscale multiplayer is a game changer when it comes to VR and while many of us won’t have a readily available 30’ square area to play in, it’s worth seeking out as never in the history of my VR gaming has an online shooter been this personal.  I was fortunate enough to play with my buddy in the same play space and while calibrating each other to the same room was a bit cumbersome, once we started shooting at each other, almost all issues were forgotten.   I would love to see additional game mode options added, specifically just to extend each round, but even with their brief length, it’s easy to just hop back in for another round as it honestly never gets boring. 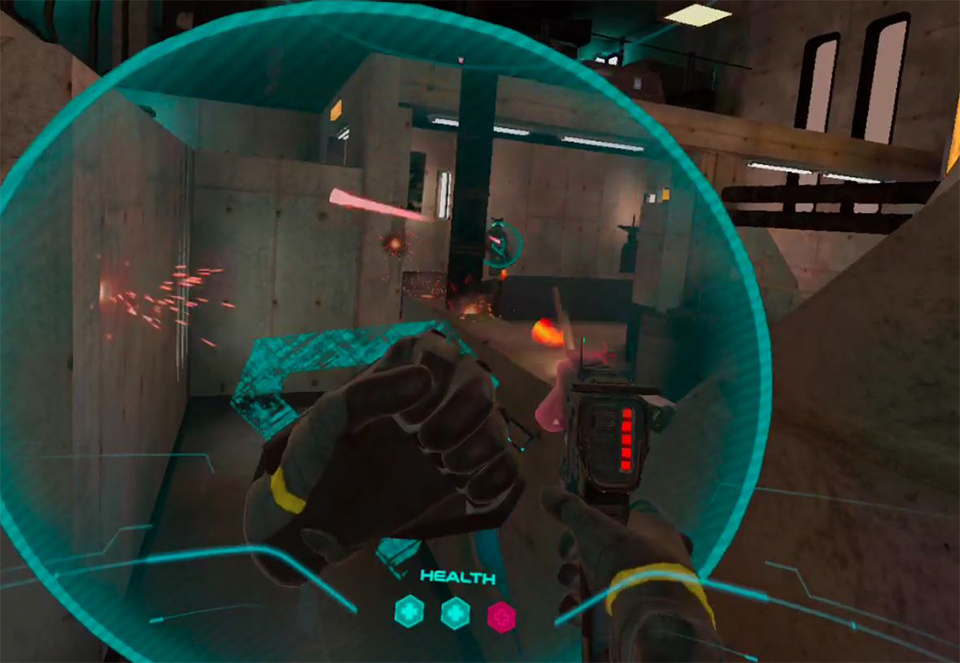 The Arena action gets intense EVERY TIME!

Space Pirate Trainer stands the test of time and is still one of best stationary wave shooters out there.  The addition of Arena mode brings VR to the next level as it unlocks the potential for larger roomscale experiences beyond just shooting.  Of course, the competitive shooter aspect of the Arena are addicting and if you have a friend with a Quest and can find that play space, it’s an experience like no other, plus you can play against bots if you want too!

What would I pay?  With the DX update the price on Space Pirate Trainer has leapt from $15 to $25 US which is hefty though does include the new versus mode.  IF you can play arena mode than that asking price is an easy ask as there is nothing else like it on any headset and it’s an absolutely amazing way to show VR to friends and family!

I-illusions provided The VR Grid with a code for this title and, regardless of this review, we thank them for that!