Alvo has finally arrived after its 1st announcement nearly 3 1/2 years ago.  It’s been nothing short of an arduous journey for Mardonpol as the development of this game was plagued by funding issues, dev team changes, cancellations and a host more obstacles that kept this game in development hell for way too long.  Video teasers in late 2019 showed some early gameplay footage and in that time the game has been refined thanks to an extended private beta and now we have one of the most anticipated games in the PlayStation VR library. 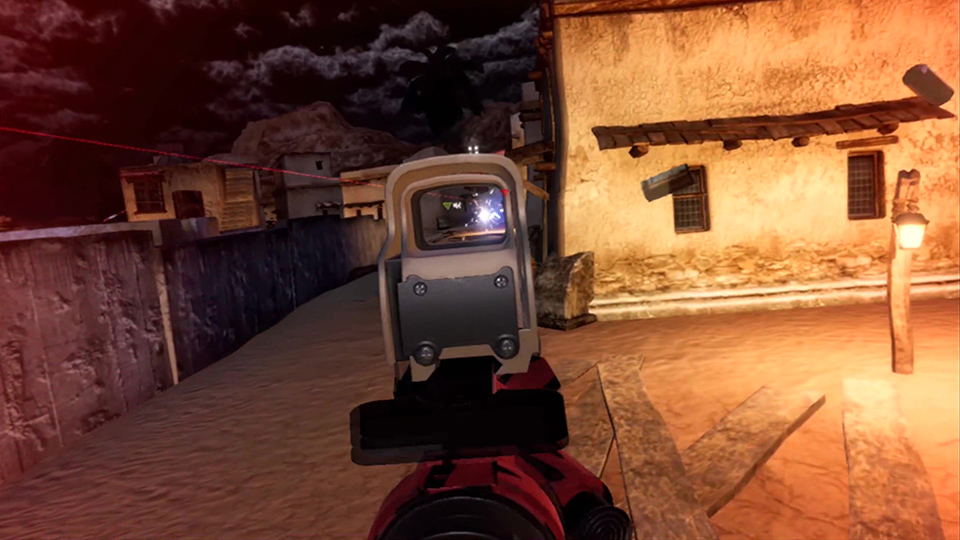 The aim controller is soooo satisfying!

All 3 PSVR control options are available and while the DS4 works alright, if you have the Aim controller, that is easily the best way to play thanks to the DS4’s limited tracking and the borderline broken Moves which anchors one hand on your weapon with the other used solely for navigation and removes the ability to move backwards or strafe with overall awkward button placement.  Regardless of your method of play, the game controls relatively the same using standard FPS controls more akin to what we see on the flat gaming side.  What I mean by that is that everything is relegated to button presses including grenade tosses, crouching or going prone, sliding and even climbing ladders.  Many will lament the lack of “VR hands” in this as it does remove much of the simulation factor many may be hoping for from a military shooter, but it is for good reason.  The advantages of that design choice are clear as the action is fast-paced and fumbling to grab at a grenade & toss it or scrambling for your next clip would spell disaster in the game this quick.  It feels much more akin to games like Counterstrike or Call of Duty than Onward or Contractors.  There are 3 modes to choose from; Deathmatch, Team Deathmatch & Search & Destroy, all of which support up to 10 players and you can bring a party of up to 5 into the matchmaking.  The first 2 modes are stock for the genre with Search & Destroy mixing up the action by adding a little Firewall into this as players are broken up into 2 teams; 1 tasked with defending multiple locations from the opposing side, who must successfully arm a bomb at any of those spots and prevent the defenders from disarming it before it goes off with the 1st team to claim 5 victories being the winner.  The kicker is you only have 1 life each round but if you die, you can still view the map via multiple spectator cams and talk to your allies about the enemies’ movements. After each round, players can stay together and vote on the next map with money being accrued after each match that can be spent on new weapons, skins and attachments.  You can customize your player from a selection of male and female avatars with 4 different loadouts available to tweak to your liking and can be changed upon death during a match.  Those loadouts include not just weapon and attachment options but also your choice of 3 grenade types and a few kill steak choices from simple NAV reveals on your radar, remote controlled drones, a killer pack of dogs and a few more with the overall package offering a little of everything we expect from modern day shooters. 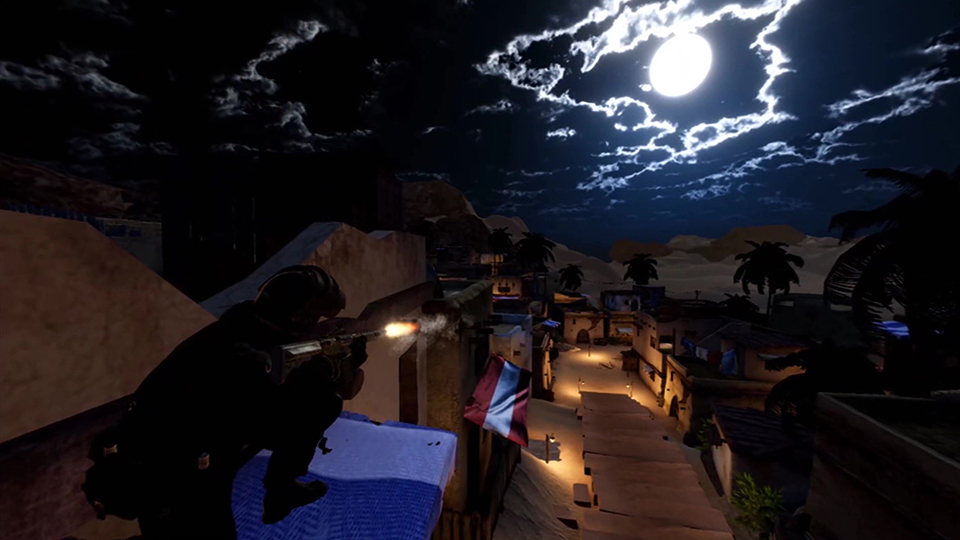 I love this night sky.

Alvo can look really good at times and not so good at others with earlier maps not looking quite as polished as the later entries though nothing in here looks bad.  There are 5-stages available at launch, some with day or night options which changes up the game a bit as it’s just easier to see your foes when the sun is high.  The scope of most of stages is actually very large and at first, I thought they were too big for just 10 people, but as it turns out, given just how fast you can cruise through a stage, it’s much less of an issue and allows for some sniping action.  Aiding those map sizes is an impressive draw distance that let’s you see enemies all the way on the other end of a level.  You’ll play in a house area with underground tunnels, an industrial complex with some impressive verticality, a desert town with tons off alleyways to sneak around, a close quarters mountain top monastery & city street.  Each one offers its own unique feel with some pushing for more fast-paced action while others allow for a little more strategy, especially in the larger ones that are designed with Search & Destroy in mind.  The nighttime settings just look better largely because the environmental lighting hides the games shortcomings when it comes to texture and environment design.  By no means does the game look bad in daylight, but the lack of dynamic lighting, shadows and some simple textures belies the games indie roots.  Character animations on the other hand look surprisingly good without much jank at all as do the weapons with an impressive inclusion being the scoped rifles that work flawlessly and are my favourite way to make a kill.  Alvo’s visuals get the job done regardless of some minor shortcomings giving us, for the most part, what we expect from multiplayer military shooters in VR. 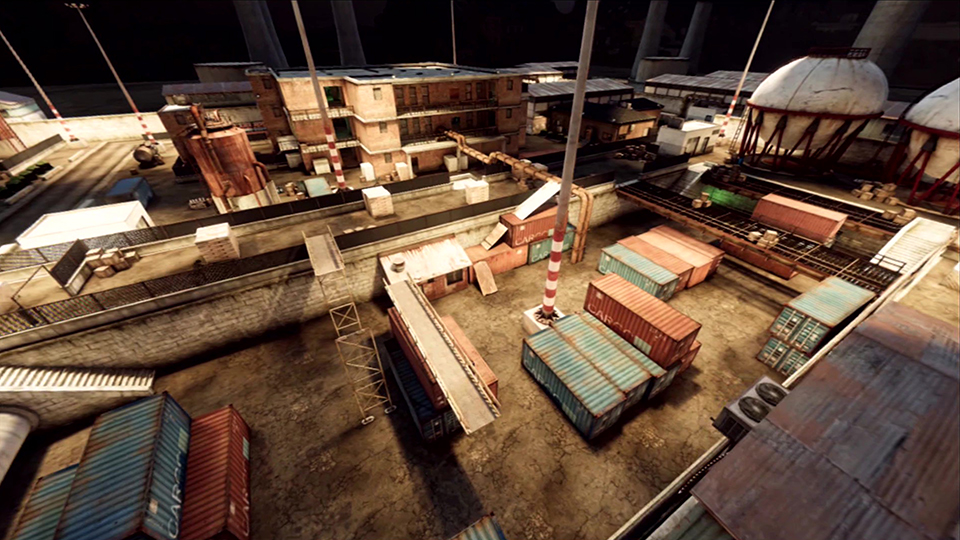 A few of the levels have some massive scale!

Sound design is a little more suspect with menu’s and loading screens having some intense music to get you in the combat mood with the actual stages playing in musical silence.  Weapons all sound alright but some of the 3D audio can be confusing and misleading, especially when kill streaks are called in with drones and dogs sounding like they are on top of you no matter where you are on the map.  Playing deathmatch lets you chat with all your enemies while the team modes only allow you to talk to your allies with mics always hot unless you mute someone.  For the most part the audio is serviceable but just need some fine tuning.

I really enjoy Alvo for what it brings to PSVR headsets but it’s clear there is plenty of room for it to grow.  A 4-month road map highlights plans to optimize the game further and add more content including new maps, weapons, attachments, and many other finer tweaks which is great! As it stands at launch however, there are a few, minor issues.  With only 5 maps, things can start to be a little repetitious and while you earn money towards those new weapons, attachments and scopes, there aren’t a ton of those in here either and I suspect that soon enough, most players will have unlocked everything the game offers making the progression system in here satisfying, but brief.  The move controls as they stand at launch are laughable and while I appreciate the efforts of trying to make that control option work, without thumbsticks, Move users will always be at a disadvantage no matter what control scheme is implemented. Other issues like sliding without any sort of transitional animation, spawn points that allow for camper kills, not enough fall damage from huge heights as well as balancing issues are typical at launch and once this is in the wild, I expect most of them to be remedied shortly after release.  Saying this feels ‘early access’ is a bit too harsh but I expect a few months down the road that this game will feel a lot more polished which is great because as it stands today it’s already a lot of fun. 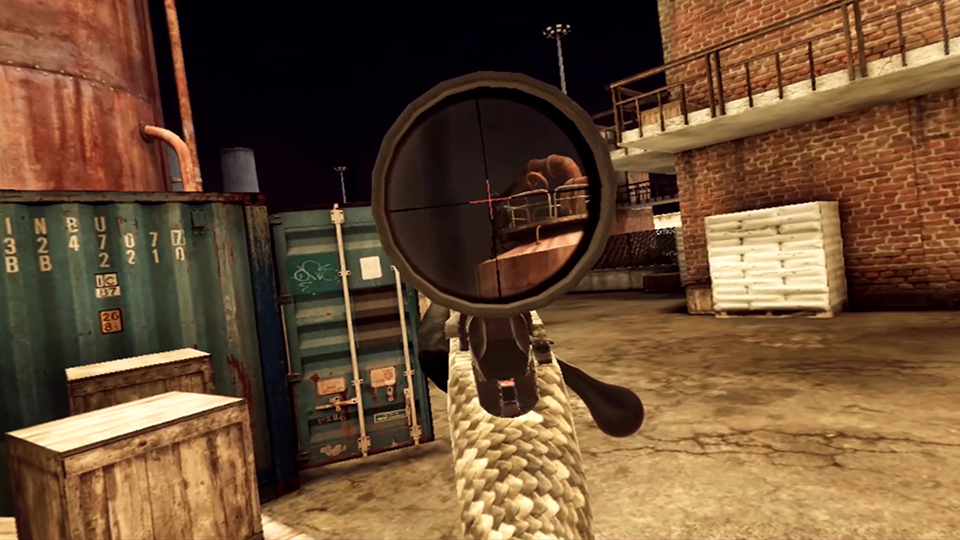 Get yo snipe on!

Alvo gets enough right to make me easily recommended it to those who have been waiting 4 and half years to play something like it on the PlayStation VR.  Its not perfect by any stretch but checks off enough boxes to satisfy those looking for a fast-paced online shooter.  Any multiplayer game will live or die based upon the player base and I think this will succeed where others have failed.  Only time will tell but I can tell you that at launch, despite my issues, this is some of the most fun I’ve had in VR in awhile.

What would I pay? This is $40 US and I cautiously say it’s worth that price assuming the developers dole out all that is promised in their 4-month roadmap. At launch this is 25% off and at that price, there is no good reason not to buy this unless you have no interest in online shooters.  It shouldn’t have taken this long to get a shooter like this on PSVR and thankfully, this one delivers.

Mardonpol provided The VR Grid with a press code for this title and, regardless of this review, we thank them for that!