Space Ops is unlike anything I have played before.  The store synopsis has you playing as a new recruit in some kind of combat program where you face a variety of enemies in a few different scenarios.  No real back story is given in the game but the bottom line here is that this is a 1st person solo, co-op and competitive shooter that plays out more like an obstacle course then anything else and while that might sound a bit odd, some key elements make it work…and others hold it back. 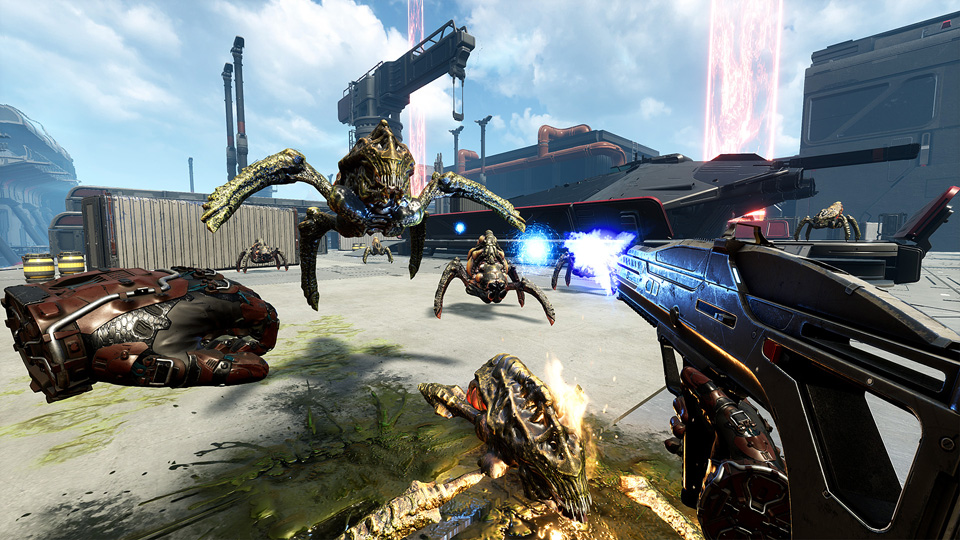 The bugs come in all shapes and sizes.

With your Motion controllers you navigate the environments using the thumbsticks with a bunch of comfort options available to tailor the games to your liking.  Additionally, you also have a teleport mechanic which is pivotal in the game as not only is it a faster way to travel, but will be needed when the enemies become overwhelming and when you need to navigate some of the obstacle courses placed in your way, which require some well timed teleports.  Your armaments are stored at your sides and can be grabbed and swapped with your off-hand and grenades are strapped to your chest, as well as some other unlockable items, that deliver some devastating wide range damage.  Each weapon has 2 modes with enemies you face typically being shielded against one of them so as you progress through a round, you’ll have to switch back and forth as the foes you face change up.  Each round consists of 6 different areas each broken up by barriers that need be taken down by pressing switches, destroying generators, pulling levers and killing all the enemies with an opposing team or player playing through the exact same course making it a race to get to the end.  Each end has a boss fight that requires slightly more strategy besides shoot until it’s dead and by my count there 2 (3) different courses currently available to play through. 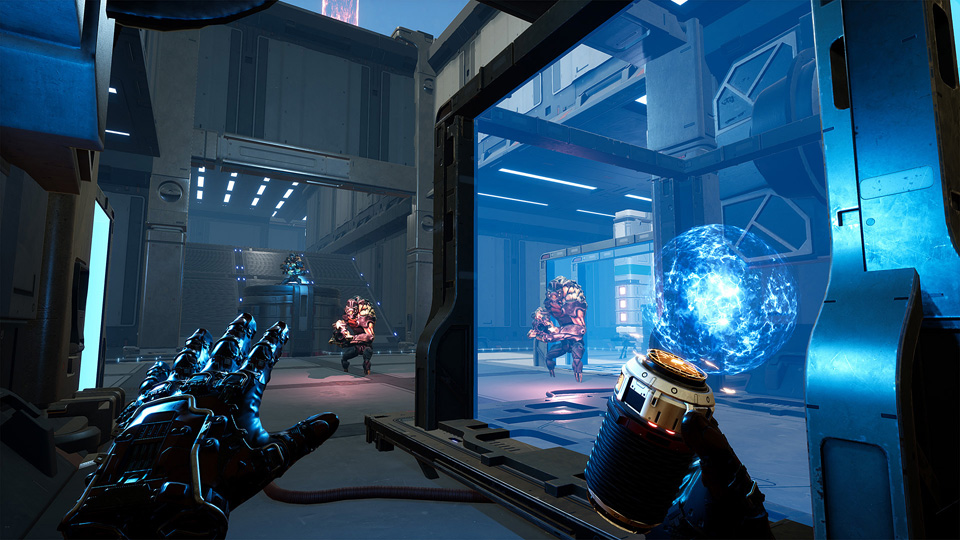 Space Ops looks pretty decent on medium settings and throws a variety of enemies and environments your way.  As each section is wholly different from the previous one, until you become familiar with the courses, you never really know what’s coming next.  One stage starts you off in a hanger, then moves to a jungle setting followed by the interior of a building with one section being in a futuristic mine and in some odd power-core thing that requires you to avoid giant laser beams to get to the other side.  It’s that variety and knowing that there is someone else playing this against you, but also right along side you and if you look to the opposing teams side (you are playing in tandem) you might catch a glimpse of them fighting the same aliens you are.  Enemies look great whether they are giant bugs, muscular looking beasts or more technologically advanced aliens armed with swords and guns.  Bosses are larger in scale and also available are a series of emoji’s you can use to wave to players and perform silly gestures, though these are individually locked until you reach specific experience levels.

Sound is on point with guns and enemies all sounding as they should.  In-game mic support isn’t currently available that I could tell, but you can use some built in commands to to direct your pal to specific  targets or locations.  An opening tutorial and subsequent ones when you unlock anything new, is handled by a female voice who directs you into using all your available weapons and abilities. 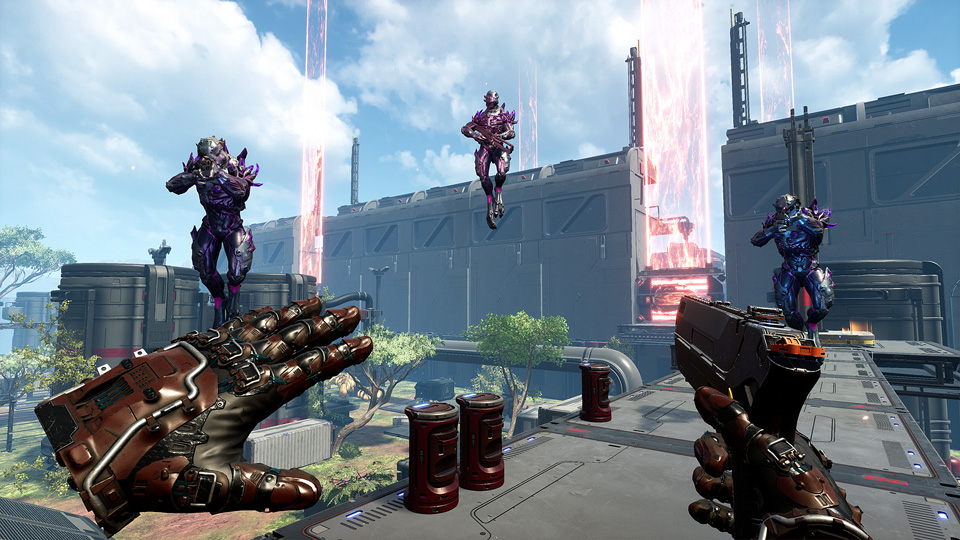 The enemies come at you from high and low.

The largest issue with Space Ops VR is the lack of player-base but whether you find a match online or play alone, the experience is identical.  This is because if you can’t find a online opponent, then you will play against a ghost from someone else run.  This can’t be said for the co-op which I have yet to play though hopefully as this game accrues more players I’ll be able to check that out.  My first few rounds, figuring things out as far which as enemy types need what kind of ammo and figuring out switches and levers and so on was a lot of fun, but after my 4th or 5th go, it started to feel repetitious.  With each course being divided into 6 sections, I think randomizing the available sections would have gone a long way to making this feel less stale.  The teleporting system is also a tad finicky, specifically in the sections that require quick thinking lest you get killed and be forced to respawn back at the start of the stage.  With all that said, I really liked the format of being a competitive shooter obstacle course style of gameplay and while the unlocks take a little while to unlock, if you keep coming back, your bound to accrue new gear. Each round typically takes around 30 minutes or so which I also appreciated as that’s just enough time to make your efforts worth it without requiring hours of game time.  There is no way to tell who is playing or if any active games are happening or ending soon and I think having a better lobby system could go a long ways to boosting player activity. 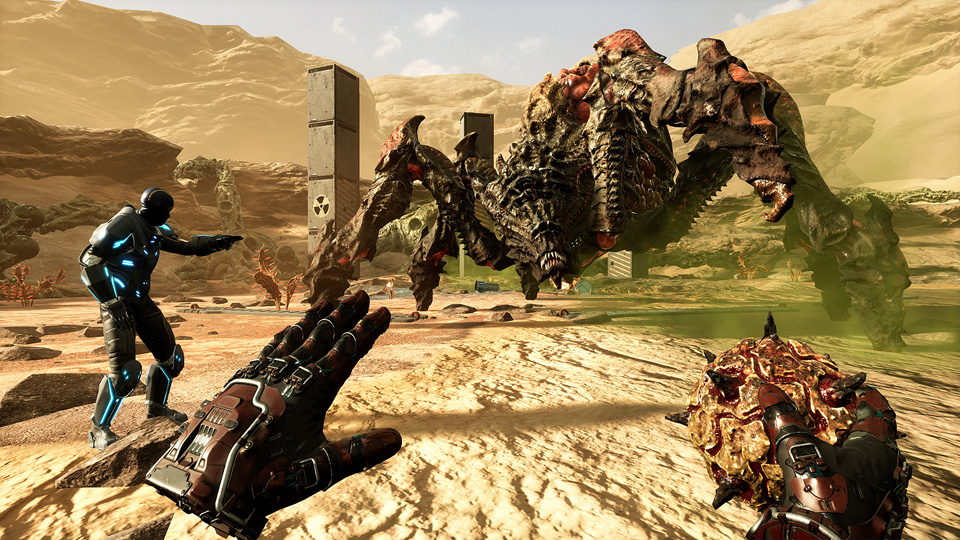 It’s probably better play with friend…if you can find one.

Space Ops does a lot of things right in my opinion, but misses the mark on sustaining interest in the game.  Once I hit the same run more then a few times, I was more bored then anything else as the game just devolves into mastering these courses shaving precious seconds off your last run and that’s not really something that sustains my interest.  Additionally there is a sanbox mode that allows you to play through individual stages minus enemies as well custom characters options as you level up.  Space Ops is a refreshing take on competitive shooters and I really enjoyed the way the stages mix up the action.  With a little more content and TLC, Space Ops could easily be an experience I return to regularly.

What would  pay?  For all my grief, this is only $15 which seems like a decent price, even if the game stays as it is now.  By no means is it perfect but I really dug the format, thought the combat was fun and enjoyed what multiplayer I did play.

Fibrum Limited provided The VR Grid with a press code for this title and, regardless of this review, we thank them for that!