Super Pixel Smash is like playing Tron squash. Created by the talented folks at San Diego based Rank17 studios, a team of five, they’ve done a great job developing this retro game for the HTC Vive. For starters, this game is a lot of fun and it’s great for players of all ages. There’s no tutorial only a few instructions on the start menu but it’s not a very hard game to understand. Hit ball, ball moves, repeat. This game feels similar to Space Pirate Trainer with its short and sweet replayability. Super Pixel Smash by comparison is a more enjoyable casual experience well suited for VR virgins. This will be a favorite for VR arcades everywhere. I think it’s one of the best VR games out there today, for a casual audience. 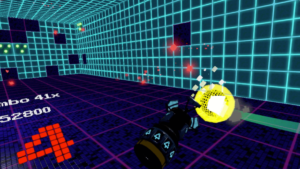 Serving the ball, I feel like Milos Roanic. Those tennis lessons I took when I was ten are finally starting to pay off. Super Pixel Smash is a game you will need to use wrist straps for and I still managed to smack my TV pretty good while playing. After a few rallies I end up flipping the controller to serve backhand grip and switching back to a forehand grip. This helped me get the swing I needed as the ball comes back to you. I can’t tell if it’s the game or if I am just horrible but I can’t seem to aim the ball where I want to most of the time. I confess that hand-eye coordination has never been my thing. Keeping my eye on the ball did improve my accuracy (go figure) and it feels soooo good when you hit exactly where you were aiming. I feel like I’m just getting lucky and that skill is less important in this game, which is not a bad thing. It’s tough to gauge the luck versus skill ratio in this game. Hit it hard and hit it fast is a good strategy seemed to work for me

The design of this game is remarkable. The art, the mechanics, the different modes and the audio are fantastic. So simple but so gratifying. The art is very retro and clean. Not over the top. The music and audio deserves the most props, it adds a playful and urgent atmosphere when you’re swinging. The announcer’s voice is great, the Bowser laugh from Super Mario 64 when you hit a red box is great, the music is incredible. The feedback loop for the player teeters on the edge of overwhelming, but never goes overboard.

There are several types of boxes you try to hit with the ball. Simply hit regular boxes, and power-ups while avoiding the red boxes and the empty spaces. This game is all about combos and getting the streak going as fast as possible. A high combo score grants access into Super Pixel Smash mode. In this mode you hit boxes on the ceiling, side walls and the back wall for a very short period of time. After the audio, I would say this mode is the best part of this game since it’s the biggest determination of how high up on the leaderboard you’re going to get. Your combo score goes back to zero after leaving Super Pixel Smash mode and it’s a race to get back into this mode before the timer runs out.

I wish this game was more accurate, or that I was better at aiming. My experience was the faster you hit the ball back at the wall, the higher chance your combo will keep and you’ll keep playing. Maybe they could add in some more mechanics in the future to add more complexity and skill. At the moment I’m number 4 on the leaderboards but I doubt that will last for long. 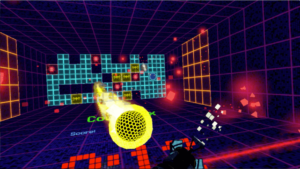 Blink and you could miss the ball bouncing back in your face!

On a technical note I tried this on my MSI GT83VR which uses a GTX 1080 and on my PC which has a GTX 970. A 970 is the minimum requirement for this game. The 1080 versus the 970 was a noticeable difference in the frame rate when things started getting intense. I played Super Pixel Smash almost exclusively on my PC before switching to the MSI to give a fair review on performance.

Plenty of replayability, fun and simple to understand. Watch out for your TV or play in a padded room. This game isn’t very physically demanding but if you’re playing it for an hour you’ll feel like you’ve at least done something active with your day. This is a must have for your HTC Vive, especially for this price. To enjoy playing it for longer, I actually switched out my regular facepad for the leather VR cover. If you don’t know, now you know.