I’ve been aware of Baby Hands for some time, ever since I found out it was coming to the PlayStation VR headset.  Despite ‘mostly positive’ steam reviews, I held off on checking it out beyond watching a trailer as it honestly didn’t hold much appeal to me with its mix of sandbox baby ‘sim’ gameplay that echoed back to the earlier days of VR.  With the PlayStation VR release I finally dove in to see what the fuss was (sort of) about so let’s get too it. 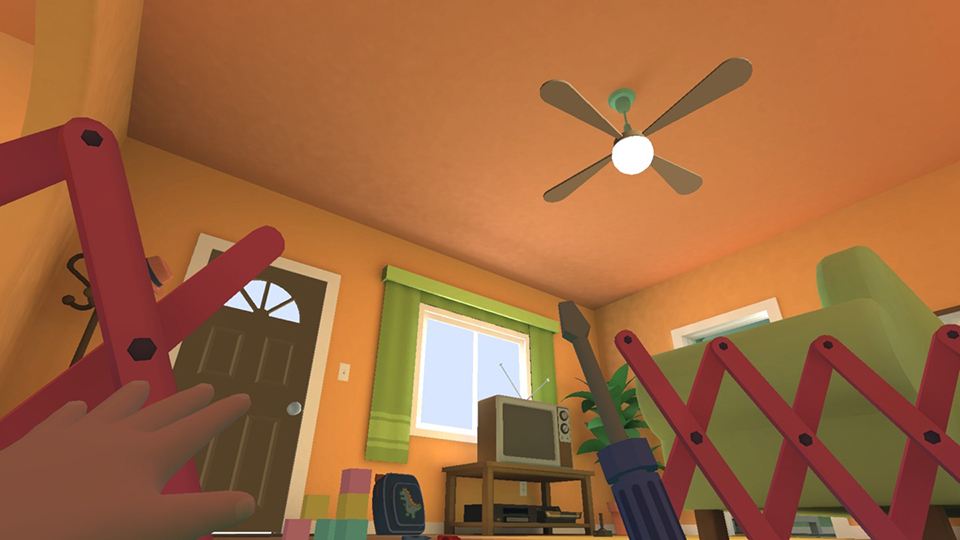 It’s a big world outside of the pen.

With your 2 baby hands, you’ll have to escape the confines of your pen but in order to move around you’ll have to crawl by moving one hand in front of the other and dragging yourself about the house where your seemingly terrible parents have left you alone and to your own devices.  With the house at your disposal, it’s up to you to do, well, anything you can come up with as you can grab almost anything you can reach and bring it anywhere in the house.  You also have the option of standing up which helps in reaching those taller spots with many areas like chairs and desks being scalable thanks to nearby arrows that teleport you to that higher level allowing for more exploration.  During the opening minutes of the game, your tasks are obvious with a nearby bow & arrow offering up some target practice, a gaming system with nearby cartridges ready for play or a remote-control car with an obstacle course to drive through.  The obvious interactions are easily the most uninspired offering up gameplay mechanics we have seen countless times in other game with easter eggs to be found throughout the house adding to your task list.  Once the obvious stuff was out of the way though, the games intricacies started to reveal themselves with some more complex and clever puzzles that require some significant thought, and maybe even some knowledge of pop culture from the last few decades, to piece together with some tasks being unavailable until others have been completed. 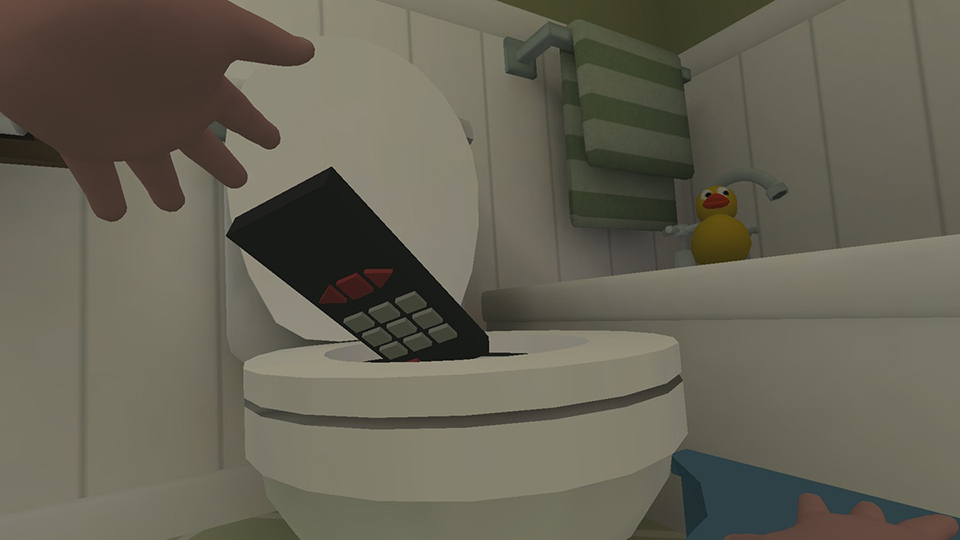 Mess around however you want!

Baby Hands visual presentation is nothing special with the house offering simple, cartoonish visuals with lacking textures that fall in line with PS1/N64 era visuals, just with increased pixel counts.  Where Baby Hands lacks in visual quality, it makes up for with its charm, thanks to the large number of items you can find and just what those items are.  Stock children’s toys are scattered around the house like building blocks and toy vehicles, but it’s in the pop-culture references where the game really shines.  From a DeLorean that can be used to enhance a racetrack, a literal alien ant farm, a rather aggressive piranha plant and some more subtle references to movies, shows and games from yesteryear and every time I stumbled across one of these pop culture nods, I couldn’t help but smirk.  Whenever I started a game, the house resets, which was initially a little annoying as I did enjoy my carnage but allows for an easier time completing puzzles (as indicated by the trophy list), especially when I had misplaced or moved an item needed for my next task.  It’s not going to win any ‘best looking games in VR’ lists but what’s here gets the job done.

Sound design is a little erratic with sound effects that are all over the map when it comes to volume levels, though all the effects are on point.  Some very subtle, almost babyish music plays in the background with the emphasis on sound effects being at the forefront of the audio presentation.  When you trigger a mini game, you’ll be treated to some additional tunes as well as 1 or 2 items found in the house providing some additional music making for an audio presentation that matches the visuals. 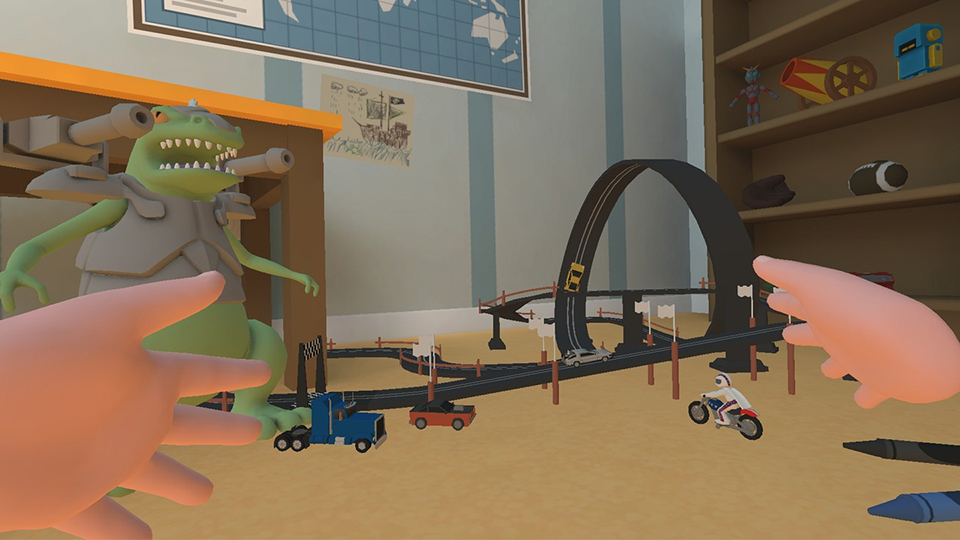 Each room has plenty of items to mess around with.

Baby Hands actually impressed me after my first half hour in the game as I slowly began to discover more and more things to do.  That 1st half hour was fairly dull as I just performed the obvious tasks placed before me, but once I started to dig a little deeper and chase those trophies, I had a little more appreciation for the game.  Despite the fun I did have, playing on the PSVR was tough thanks in large to the Move controllers which worked perfectly fine when moving around the environment, but when controlling specific toys like the race car or any mini games that NEED a thumbstick, using the face buttons instead was just cumbersome and awkward.  I’m sure anyone who spends the time to master those controls will, but that doesn’t change the fact they are more difficult than they should be on the Sony headset.  Another, ridiculous issue in 2021, is the lack of a smooth turn option making this game not only look dated but feel dated as well with the absence of any comfort options to speak of should people want them or not.  The crawling locomotion system should alleviate sim sickness, if any, you might experience, but the lack of basic comfort options is still odd.  Even though I did enjoy finding new things to do and slowly unlocking trophy after trophy, this is still a sandbox experience which means the fun factor here relies largely upon just messing around as there is no story or even an objective list save for the PSN trophy list, which oftentimes gives away solutions which can make for a dull experience as I felt like I was just going through the motions.  Not every trophy is like that with more than a few stumping me and even after close to 3 hours of play, there are still a bunch I haven’t figured out yet meaning those that love these freeform type games should find lots to do here, but if you enjoy games with a little more structure than this won’t be for you. 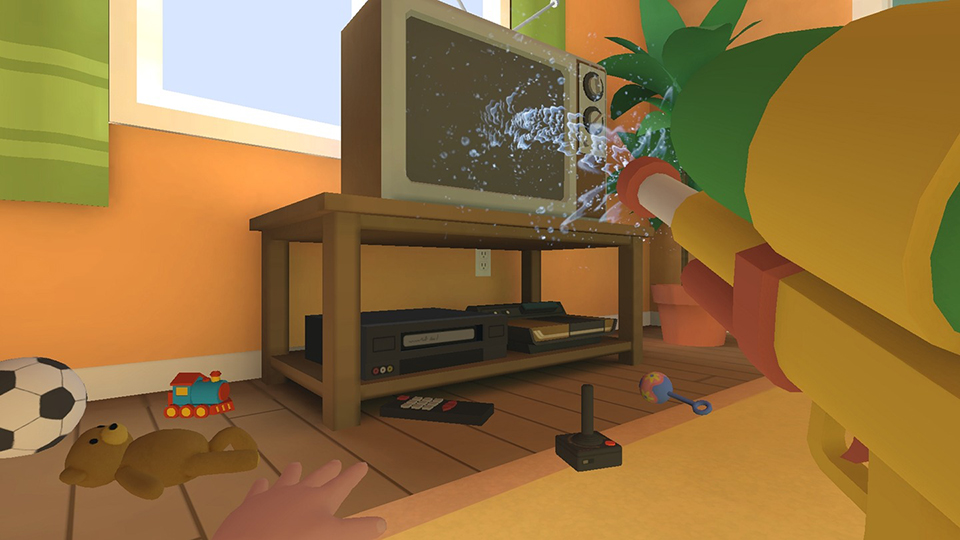 Do what you want! Your horrible parents deserve it!

I was surprised by how much I enjoyed playing Baby Hands though I do need to stress that I went in with fairly low expectations.  On that same token, while I did have fun for a few hours, I became bored with the game before I completed all of my tasks with little drive to return. It delivers on it’s promise of playing as a baby in a sandbox house that is loaded with funny interactions and puzzles to solve.  If you enjoy more casual experiences like Job Simulator or Hotel R n R than you’ll probably dig this but if just messing around in VR doesn’t do it for you, this probably won’t either.

What would I pay? Baby hands retails for $20 US and while that price is justified by the content value, the sandbox nature of the game as well as the overall middling quality of it all has me thinking of this landing somewhere in the $10 range.  It’s charming and has a few funny moments, but that’s not enough to make this feel like anything but a budget VR title.

Chicken Waffle provided The VR GRid with a press code for this title and, regardless of this review, we thank them for that!