Quest headset owners and fans of classic snowboarding games like SSX & Amped can rejoice as that winter activity makes its way to VR thanks to the one of original developers of 1080 Snowboarding, a kick-ass slope slicer released on the N64 many moons ago.  Despite that games praise, it’s been some time since than and VR is a whole different beast than flat gaming so let’s see if that formula can still work in our headsets. 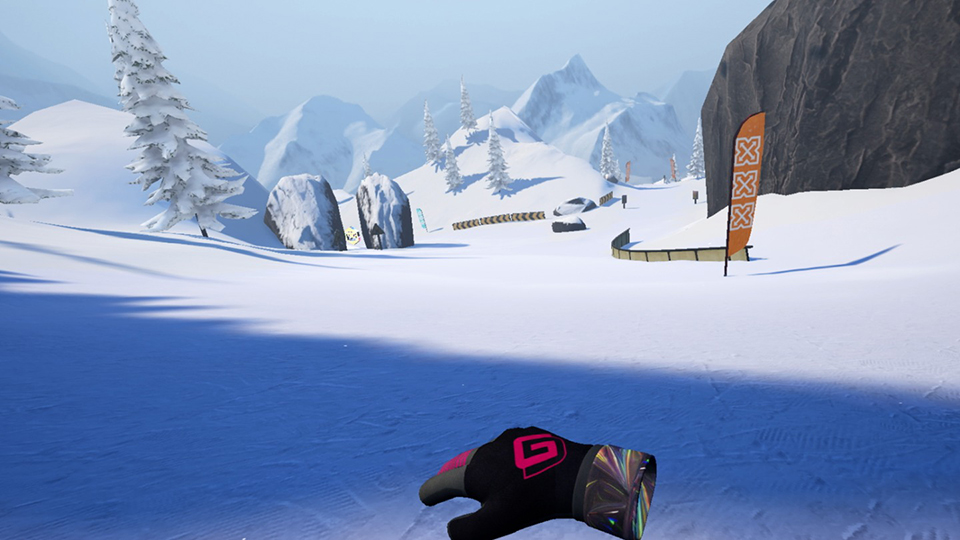 Take to the mountain from the comfort of your home

So, how does one control a snowboard without having and tracked feet in VR?  Well, with your hands of course and while that may sound odd, it works surprisingly well.  You’ll start off in a quick tutorial that carries you through the basics where you need to essentially balance on the board, standing sideways to your front facing calibration stance with your hands outstretched as if you were actually on a board.  The angle and direction of the board matches your extended hands so to steer forward, you keep your hands parallel to the hill and to slow or stop, simply shift your hands so they are perpendicular, as if you were actually snowboarding!  As a guy who has only dabbled in snowboarding (skiing is better…fight me) this was very intuitive and within a minutes I was comfortable careening down the slopes at top speeds.  There are 6 different courses to play on and each has 2 modes to choose from, the 1st is race, which challenges you to get down the hill in the fastest time and second is freestyle where you need to perform tricks to get high scores.  Tricks are…. tricky and as of this review I’m still struggling to master them though I think those that board in reality will have a way easier time with them.  To perform tricks, you need to use your face buttons to grab the board with either or both hands and proceed to perform some aerial feats with jumping being handled by quickly raising both your hands in the air.  The tutorial teaches you the basics but in practice doing anything beyond the basics requires a fair bit of thought and skill and to get the max points, you need to chain together tricks which multiplies your combo meter for larger scores.  Where this becomes an issue is that while there are 6 courses available. 4 of them are locked until you collect enough medals in both race and freestyle meaning, in order to unlock those courses, you need to figure out how to be a freestyle master.  Hidden throughout each course are new boards, gloves or mixtapes indicated by large icons which you’ll need to touch to unlock with each board having varying stats that you need to pay attention to depending on whether you are racing or freestyling and the conditions of the mountain. 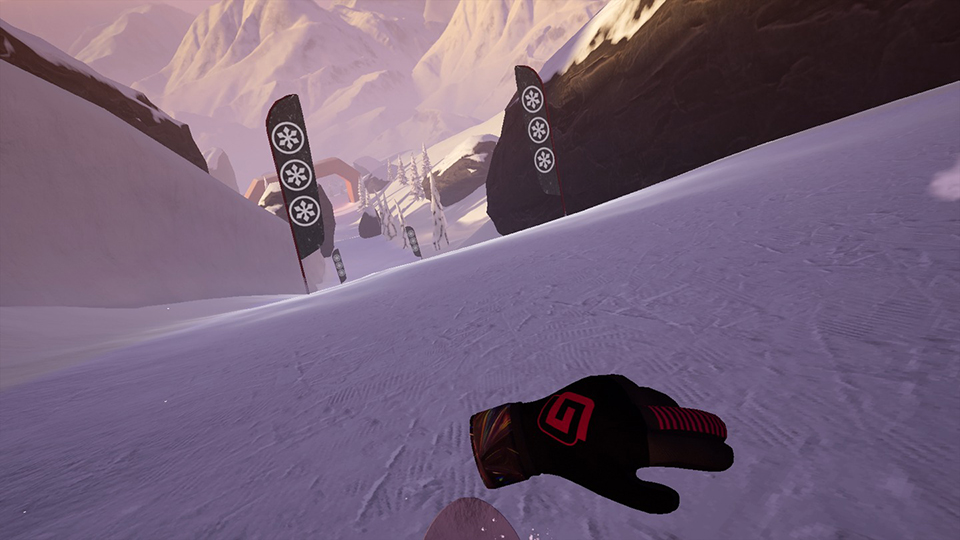 The texture on the snow is great..and everything else isn’t to shabby either.

I’ve definitely been critical of the visual quality of the games on the Quest as it seems the larger the experience, the more sacrifices need to be made to render all that on the mobile headset.  Knowing I was about to snowboard down a mountain, I was leery that this would look substantially less immersive than I need out of my VR titles and that is so not the case.  A log cabin acts as your hub area and has some fun physics to mess around with as many of the items scattered around are grabbable, with a nearby ping pong ball gun letting you have some goofy fun and your trusty dog sleeping on the bed.  Heading to the slopes, the visuals take a bit of hit with some flat textures and simple geometry, but everything still looks like it should with snow covered trees and rocks littering the hill.  Lighting effects are sparse with most of them being static for any of the items on the hill though watching the ground before you reveals small jumps and dips that highlight where you may want to go and while it doesn’t look hyper real, this emulates the real world experience quite nicely.  The snow has some nice texturing on it and while it can look a little flat at times, I was impressed by what I was looking at! 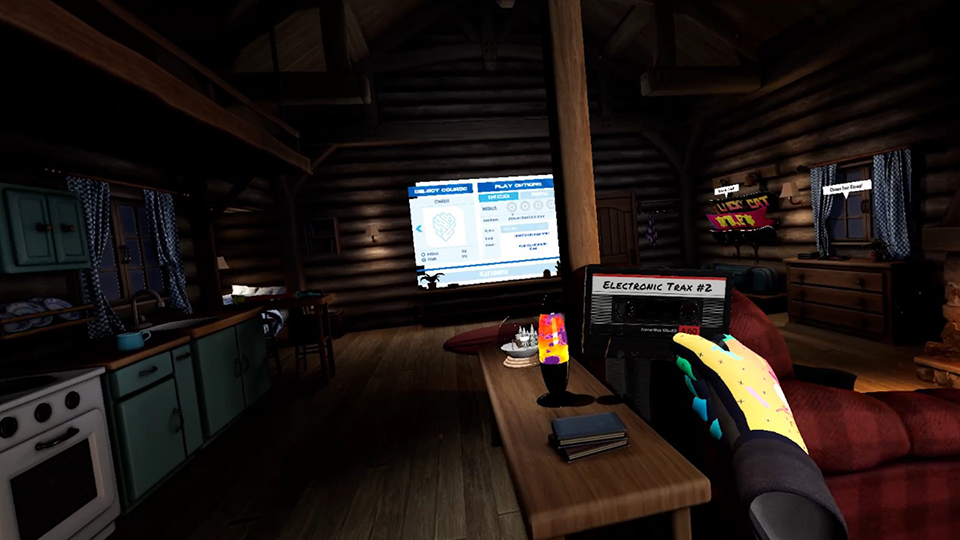 No matter mix I selected, i wasn’t a fan.

The sound effects are bang on and I can’t recommend headphones enough for this one as the sound of every carve, grind, jump and landing is on point and cruising down the mountain at top speeds is thrilling.  If you hit something too hard, you’ll hear an audible grunt and might have to wipe the snow of your glasses and even coming to close to a tree or cliff will elicit some extra ‘whoosh’ sounds and even a rustle of branches if you play things tight.  The soundtrack can be chosen from those mix-tapes found in each stage though didn’t really do much for me and I found most of the tracks to be slow and not really my jam, but there is fairly large selection of music to chose from nonetheless.

I really love this game (minus the music) and found myself doing stuff in the real-world while in VR that I thought I had trained myself not too and it felt great!  I was leaning to my sides during some tight turns (and almost losing balance) and even jumping with my hands in the hope of getting a little more air.  My point here is while it’s not a perfect emulation of the sport, it feels way closer than you might think and that’s awesome.  The courses have a variety of paths and hidden areas so learning these will be key in getting those top speeds or finding the most trick spots.  I did have an issue with the board being to far forward and with the board mapped to the headset, if I moved forward, so did the board and recentering did little to alleviate this problem.  It never affected my gameplay but is an issue that needs to be addressed. My only other issue would be the high point count needed to get the medals in freestyle to unlock the other courses and while the sim side of this is awesome, it’s punishing to play and fail on the same courses again & again.  Chaining together a new combo or learning a new trick is satisfying, but I’m still struggling to get even the minimum score to get the medal needed to unlock the next course and it’s nothing short of frustrating.  A practice track is available that tries to teach you how to do new tricks, but those instructions can still be quite obtuse.  I’ve never been a fan on blocking content in games based upon skill as there can still be a reward system in place for those hardcore score chasers while still letting more casual players enjoy all the games content and I feel like this may be the largest issue with the game.  I’m still having fun with Carve, but I’m not sure if my patience can rival my lacking skills. 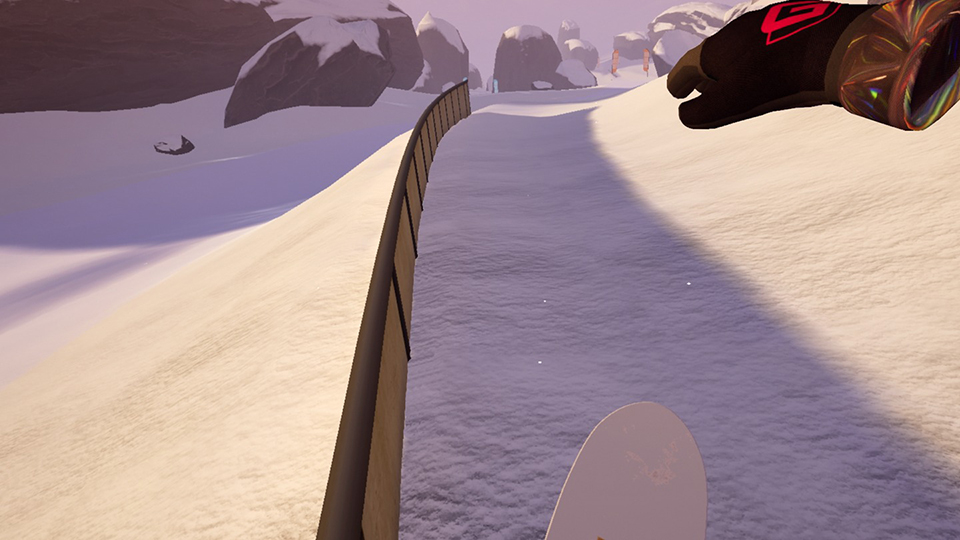 Grinding rails is key in getting those freestyle points!

Carve Snowboarding is awesome save for the issues I mentioned above and if you are willing to commit the time to getting good, you’ll be able to experience all of the game including the additional boards, gloves and mixtapes found in the later stages.  For more casual players, though, this may bring about some frustrations as you can’t enjoy the game like you may want too.

What would I pay? The $20 price on this is great save for the way the stages are unlocked.  The snowboarding is surprisingly intuitive and I have already spent hours in here playing the 1st 2 courses and having fun doing it.  I just don’t know if I’ll ever develop enough freestyle skills to enjoy the rest of the game and that sucks.

Chuhai Games provided The VR Grid with a press code for this title and, regardless of this review, we thank them for that!