GNOG would have made a great PSVR launch game.  It’s pretty, relatively easy to use, won’t cause any simulation sickness and above all, it’s almost instantly forgettable.  This a “puzzle” title that play less like problem solver and more like a complex, interactive experience.  It does a few things right and a few more things wrong so let’s get into it.

Solve the ‘puzzle’ and get those tunes cranked!

First off, it looks crisp and clean.  Everything is stylized to almost look like some kind of weird puppet show, with each level taking place in an an oddly shaped head.  The little animatics before you are vibrant and colorful, though lack any crazy detail.  Each of the 10(I’m guessing) or so puzzles are their owned self-contained game/story so each stage has some kind of theme that differentiates itself from the others.  Completing each stage results in a little dance   The minimalist visuals look quite great in VR and were a highlight though I did feel like this game looked more like it belonged on a less powerful platform, like the Gear VR.

The audio as well is decent with some light jovial tunes accompanying the light jovial sound effects.  A tonne of audio effects litter this title so pay attention to what is going on as there may only be an audio cue to clue you in to what is happening.

The gameplay is a different story as each puzzle is it’ own self-contained mini game.  Some puzzles involve turning dials and levers while others involve flying a spaceship on a 2D plane or lowering a diver to the oceans depths to discover clues.  The puzzles do a great job of separating themselves from each other and mixing up how you play the game.  All of this is done utilizing the dual shock 4 controller, which is unfortunate as I think this kind of title would have benefitted from move support.

Unfortunately, the puzzles themselves aren’t really puzzles, at least not all the time.  While you must trigger switches and other level specific items or creatures or whatever’s, it’s never really a challenge.  Most of the game will be spent just clicking ‘stuff’ to see what it does, and more than half the time, that will be enough to progess through the stages.  You can rotate the stages from front to back, which will be necessary to complete many puzzles but this whole experience just felt shallow.  I never really had to think, just move my cursor around until an item highlighted and that solved most of the puzzles.  The few moments that required thought were comprised of some basic memorization or some mini games like the 2D spaceship flying. 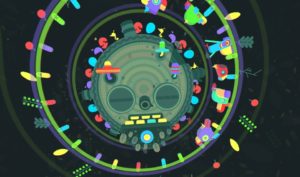 Each level ends with a little song and dance number that utilizes the VR headset.

Completing puzzles unlocks more puzzles and while most of the puzzles have a tiny story involved, they aren’t linked in any way and completion of game gives you nothing more than a celebratory song, which I saw after every level anyways, as well as the credits.  Upon completion you are free to revisit the levels again, but I can’t think of any reason why you would want to.

I was just so bored. The audio polish and visuals are great, but simple.  The gameplay is just so shallow I was happy I wrapped it in under 3 hours.  This is peak mediocrity here and while it’s not awful, It’s also not great in any way either.

What would I pay? $8US. GNOG is a shallow experience, great for newcomer to VR but for anyone that has owned VR for any significant time, this will bore you.  If you like puzzles buy Statik instead.