I was a big fan of Lands End, the exploration puzzle game that first appeared on the Gear VR early last year. It was highly immersive, offering simple gameplay, but was greatly atmospheric and ideal as a VR game. My main bone of contention was that it was incredibly short and I longed for a sequel or something similar. Annie Amber was subsequently released sometime later and although it bore some of Lands End’s traits, I found it very slow and a bit too strange for my liking. 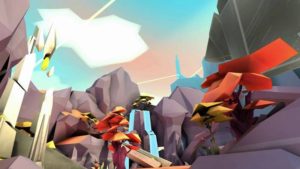 Lush visuals await your time on this world

And here we come to Althora, the first VR title from developer Eipix.  The story involves yourself and a flying robot companion as you crash your space vehicle on some mysterious planet, exploring said planet and discovering the treasure of the ancients over the course of games 5 stages.

I was immediately struck by with how beautiful, crisp and vibrant the visuals were with the landscapes you explore being wonderfully realized.  The art design team have conjured up a world of awe and all their creative talents are on show here and certainly deserve recognition. With its dizzying heights and alien terrain, each chapter details its own theme for different areas of the world and they never disappoint. One particular stand out moment was riding on the back of a giant flying “space fish”. Standing up and looking at the landscape below certainly had me feeling as though I was there and my legs did wobble on more than one occasion.

At the games onset, you are shown a message stating ear phones need to be worn to fully appreciate the music and sound effects on offer here. They complement the visuals perfectly and further help to create an immersive world surrounding the player.

Control in the game is handled by simply turning your head, pinpointing items of interest or picking out locations and heading toward it. There is no free roaming movement, instead points of advancement are highlighted and a selection with your headset will move you to that point. The game sets a very linear line of exploration, meaning there is only one path in front of you with no choice but to follow. There are some puzzles featured in each chapter which include rotating dials, lining up beams of light and so on, but they offer no challenge. Your droid companion narrates as you go and details the puzzles that lie before you. A bit more of a challenge with these would have been welcome if only to draw out the lifespan of the game. 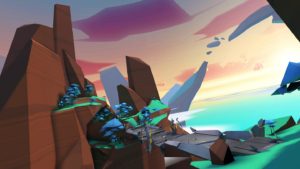 Exploration is the order of the day.

Althora, like other games of its ilk, is a very short lived experience. From start to end credits, I clocked the game in under 40 minutes with no real replayability either. This is a VR title that aims for meditative and peaceful exploration rather than action and frustration.  I did find that when moving to each location, the motion became jittery and occasionally the sound became out of sync, a smoother experience would have helped greatly.

If you were a fan of Lands End and want more of the same then Althora is a perfect follow-up and a must have.  Although it features simple puzzles and short gameplay, it’s an experience worth playing if only just to marvel at the creative visuals and at the immersion it provides.

What would I pay?  For its short play time and limited replayability I feel like a few dollars should be shaved off when compared to similar titles.  That said, it’s a quality game and definitely worth your time.

Eipix Entertainment provided theVRgrid with a review copy of this title and, regardless of our review, we thank them for that!