End Space has been available on the Gear for sometime and was actually one of my very 1st reviews.  As my format was a little less structured when I first reviewed this, and with a multitude of updates in that time along with the upcoming PSVR release, I thought I would take the time to revisit what was(and still is) one of the best Space Shooters on the platform.  In fact, this is one of the best games for the headset and just a joy to experience. 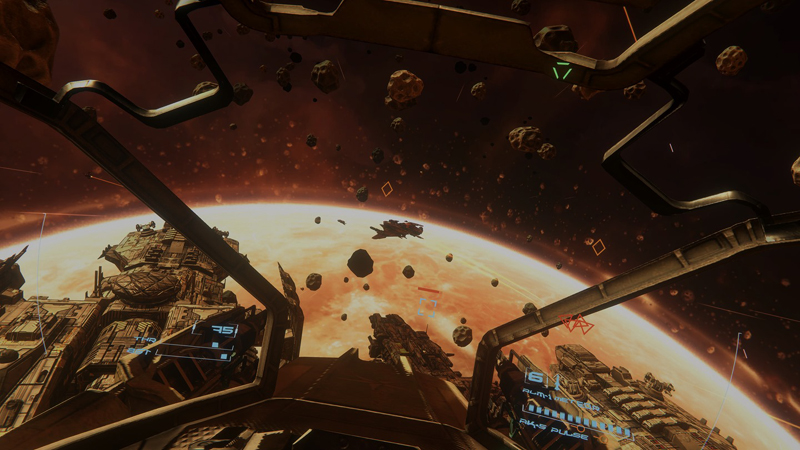 No joke, this has some of the best visuals from a Gear VR game…ever!

There are a few control options available utilizing every method of control used by the headset.  Just using the headset controls works, but severely limits the game by removing or consolidating many functions to just the few available taps or swipes.  It still works and though I didn’t prefer it as a control option, it’s serviceable.  The latest control support available is the Touch controller, but I found this to be immersion breaking as controlling you ship with a wand just felt awkward.  Both of those methods rely on steering your ship by looking where you want to fly.  Lastly is the gamepad, and my recommended way to play the game  You are in full control of your ship including speed, steering and weapons, and though their are a few options available in this mode, using an in-game neural interface with your weapons(ie. look where you shoot) is the most intuitive way to play, imo.  Using the gamepad works next to flawlessly, and in conjunction with head tracking makes this feel like a console VR experience and not just a mobile VR title.

End Space was one of the best looking games for the Gear VR headset when I reviewed it last June.  Since that time it has only seen improvements in almost every way.  This inside of your ship now has a body, holographic displays have been added to the interior of the ship making for a more natural way to see the different statuses of the ship.  Enemies and objects have seen improvements as well adding a tonne of detail making things just look and ‘feel’ more real.  I could be wrong on this last point, but I think the backgrounds have been revamped as well, and regardless if I’m wrong, they look great and only add to the experience.  Even the menu screen offers some bonus content allowing you to teleport to certain areas around the hanger and check out the sights.

On he audio side, this excels as well.  Your ship, a Minos Starfighter, sounds as it should with weapons, boosts and impacts all carrying with them some significant punch!  Throughout each mission you are in contact with your commanding officer who explains the current situation, objectives and story.  The voice actor does a great job and sells the universe and story you are playing through.

The tutorial level teaches you the basics of flight and combat as you would expect and once you hit the missions the game picks up.  The story has you playing through a few varying missions whilst under attack from the TFL, a group of rebel scum who’s agenda is in direct conflict with your governments.  Throughout the 8 stages available, you’ll see a variety of ships and space environments that make each mission/level feel unique.  While the 1st mission has you navigating an asteroid field.  A latter one has you maneuvering around crystalline formations that look damn near beautiful thanks to the top notch lighting effects.  Though each mission effectively plays the same with TFL ships showing up and you having to fend them in a dog fight, some involve investigation and stealth, giving each their own unique feel.

In its current state I still have a few issues, the first being that the AI just doesn’t seem to be very competent missing almost every shot directed my way, while not even trying to avoid my attacks.   Secondly is the sluggishness of your ship. It feels like a slight boost in turning speed would greatly help in making me feel like I was behind the helm of a fighter, not a barge.  Still, those were minor issues and overall the game still plays smoothly and is a joy to play through. 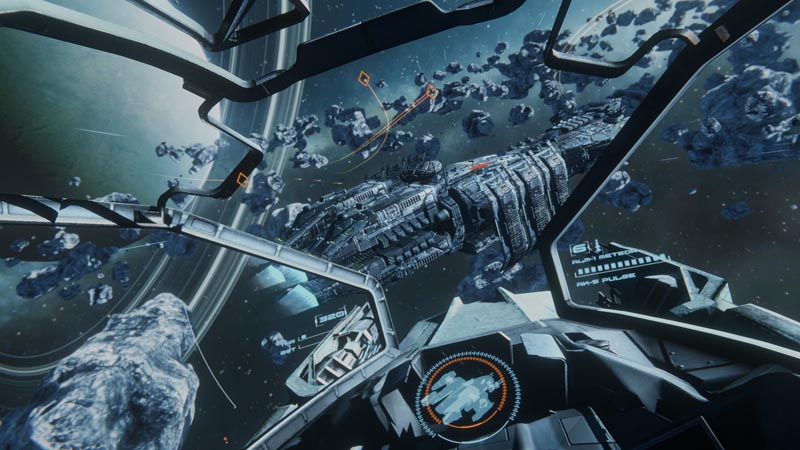 This game is the closest thing I’ve played to a console experience on the Gear VR, from both the visuals to the controls and story.  This is a solid game that serves the genre well and with the promise of more content coming soon(hopefully) I can’t recommend this enough. This is the kind of game you show friends and sets the bar for the quality of games we should expect from these mobile VR headsets.

What would I pay? At $3.99,it’s great value for what is definitely awesome and a pretty sweet ride.  Add to that it feels like an actual console shooter and not something that was shoehorned into VR and we have a winner!