*Since the publication of this review, the developers have released patches addressing my issues with locomotion and now includes a smooth turn option*

First-person puzzlers have become a staple in VR, placing the user in any number of unique circumstances that could have you traveling through time, escaping a mansion, unlocking the secrets of a Mars facility or, in Unbinary’s case, aiding and auditing an AI designed to control the world. With your aid, you’ll have to run it, and by proxy yourself, through various tasks designed to see if the AI is ready for such a momentous job. 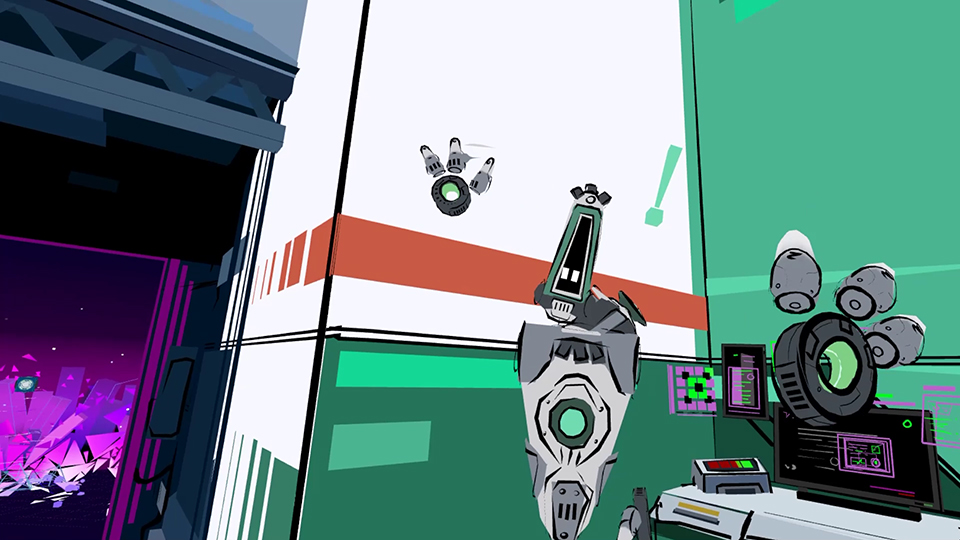 You play as “Autonomous User” and must complete a series of tests designed to root out any anomalies that could prevent the AI, named Webby, from performing its mission.  Smooth locomotion, teleport or stride (animated teleport) are available as control options as is seated or standing play though at the time of this review, 45 degree click-turning is your only option, and I found the smooth loco scheme to be a little wonky as I often hit dead spots using the thumbsticks that forced me to move in another direction before I could move straight.   You’ll have to make your way through a series of simulations that boil down to escape rooms with a data cluster that you need to find at the end of each one.  Controlling a robot, you’ll need to pull levers, climb walls, press buttons, shoot targets and outsmart other robots who block your path.  In order to do so, you’ll need to find panels that allow you access to restricted areas as well as swap head pieces with other robots to give you powers unique to that robot’s design.  There are 22 stages to get through, each harder than the last as they introduce new mechanics and require you to chain them with previous abilities, making for some very clever puzzles.  Working against you is the system designed to test Webby with a story unraveling that tackles heavier issues than I never expected from a game of this ilk.  It took me just over 2 hours to get through the campaign and once you complete a stage you can revisit it from the main menu though, as far as I can tell, this is more of a one and done experience as the levels play identically when you revisit them. 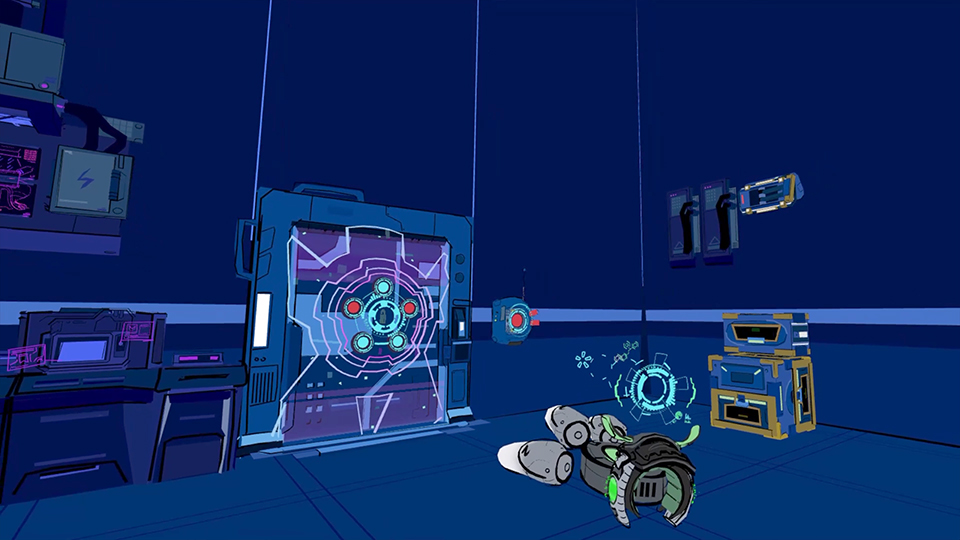 You’ll need find these locks hidden throughout a stage to unlock these doors.

Unbinary’s largest appeal, imo, is the hand drawn art style which looks fantastic and is something I don’t think I have ever seen done in VR, at least not to this extent.  The environments lack much in the way of details with walls and objects all having hard black outlines highlighting their edges.  Colors all have hard edges as well with those smaller items (like panels on doors) appearing outside of the black lines that surround them giving everything a very sketchy look.  It looks fantastic and while the color palette used can make the rooms you are in look a little flat at times, enough details are put into the glowing buttons, water tanks, broken pipes and everything else to make this world feel authentic.  Found throughout the simulation are AI programs that appear as robots that may block your path or aid you depending upon their type.  All the robot animations also appear to be hand drawn and even through they seem to suffer from a lack of fps, their look and movements fit the overall style of the game and had me thinking I was in a cartoon world.  As much as I loved the art style, the game can look a little to stark and almost drab at times thanks to the facility this takes place in meaning you’ll be looking at a fair bit of white & grays, especially early on, and unless you need to swipe your hand at a door or climb across a gap, you can’t interact with anything not puzzle related in the world which made it feel like a very focused simulation, which I suppose is exactly what this is.

The soundtrack is an interesting one as, for the most part, it’s comprised more of ambient sounds that match the environment around you than a full-on musical score.  Due to this, at times I didn’t even realize music tracks were playing as they sounded like background noises which I found to be quite clever.  Webby is the star of the show as she/it is a rather charming AI with a bit of an attitude who initially comes off as being dismissive and arrogant though once the story opens up a bit, becomes much more friendly and relatable.  It’s not the most narrative heavy story I’ve ever seen, and I was confused at time by what events I was triggering, but it all comes together in the end to make for a satisfying little story. 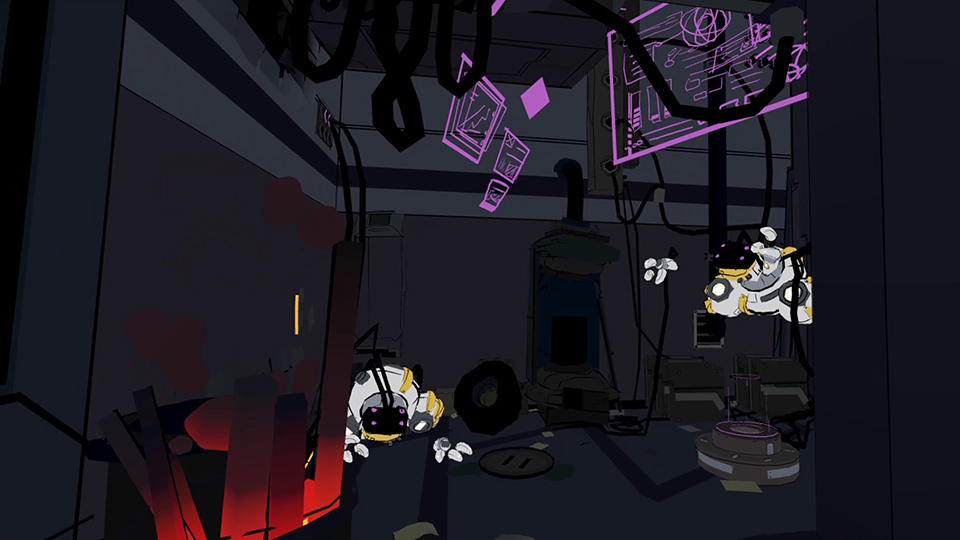 behind the scenes, the world isn’t quite so bright.

Unbinary is not unlike games like Gravitational or Chroma Gun where you travel through a facility completing the challenges put before you to get to the end.  Where Unbinary suffers a bit is in the challenge factor which never really gets too hard.  While there are a few gameplay elements you need to juggle like climbing, swapping robot face plates, shooting a laser gun at targets, activating switches and opening doors, once I knew how a mechanic worked, when I encountered it again, I knew exactly what to do as the puzzles became an almost paint by numbers affair.  The only times I was ever held up were when I couldn’t find or just missed a switch or climb spot just because they were hidden save for the final 2 stages which turn the game on its head and even than, the puzzles are more trial-and-error than actual brain teasers.  I still had fun playing through the campaign thanks in large part to Webby’s personality and the story at hand, but for those looking to test their acumen, this won’t really push you to your limit making it feel more like a VR puzzler for beginners than for those looking for a challenge.  The story also lightly tackles issues of racism and segregation in some clever and non-pushy ways which I did appreciate with the overall narrative being fun given the rather darker tones of the core plot of AI controlling humanity. 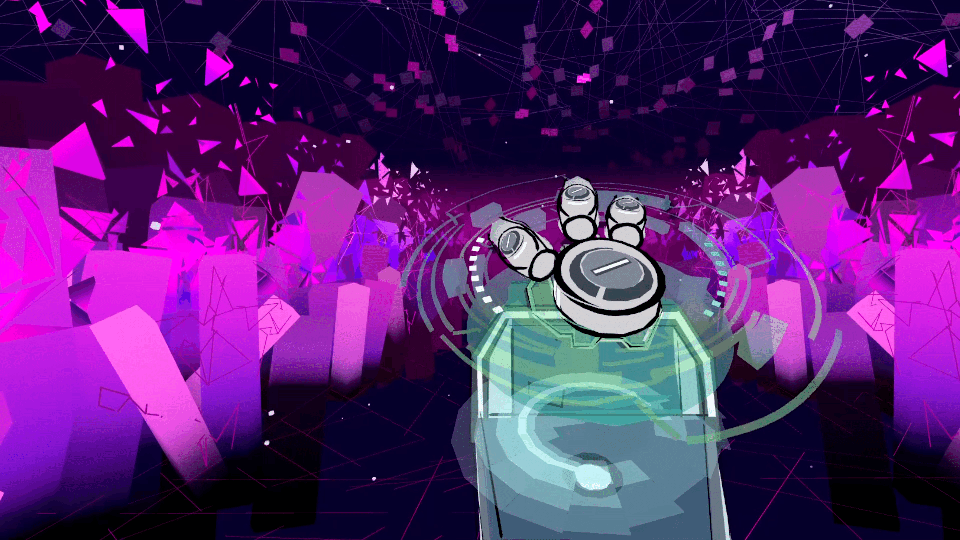 Each stage ends with a new discovery about the test program.

Unbinary is a little puzzler with a fair bit of charm, fun & a unique art style.  The puzzles might not be the most hardcore, but in combination with the story and Webby’s personality, still makes for an entertaining VR adventure.  For those that can’t get enough VR puzzle goodness, don’t look past this title as it might surprise you!

What would I pay? The price in this is a modest $15 which I think is on point for what is offered here.  It’ll kill a couple of hours and offers up enough interesting mechanics and a fun story that won’t make you regret the purchase…assuming you like these types of puzzlers.

Ludact provided The VR Grid with a press code for this title and, regardless of this review, we thank them for that!