Puzzles and VR go together like…elderly men and suspenders.  The ability to solve puzzles that are, for all intents and purposes, right in your face adds a whole new level of brain tickling immersion.  Treasure Hunter puts you in the boots of a young explorer named Jane who must solve a series of reflected light puzzles and find the secrets hidden within an egyptian pyramid. 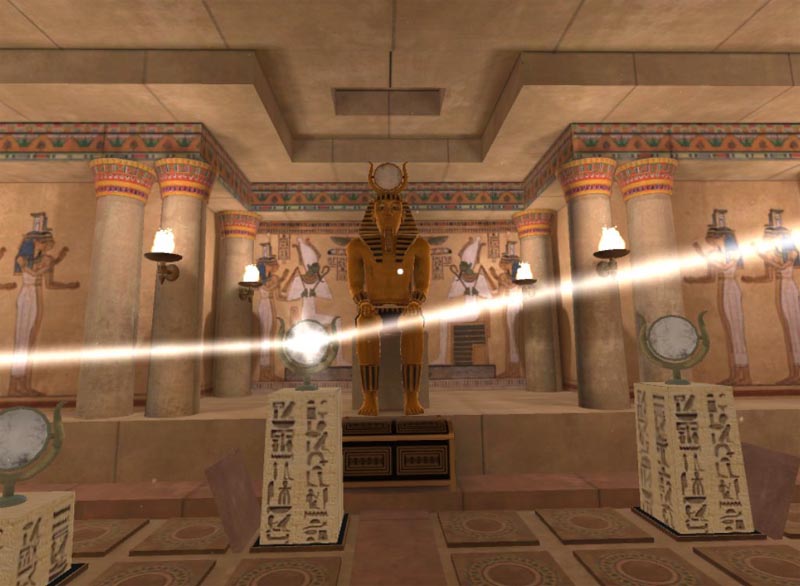 The lone stage has some nice Egyptian details.

The core gameplay here is relatively simple, simply look at an object for a few seconds to activate it.  Initially you are outside of the pyramid, and to your left stands a large stone plaque(?) broken in many pieces while on your right are a few historical items to find.  Enter the pyramid and you have reached the main game which involves maneuvering a bunch of mirrors scattered around the singular room to reflect a beam of sunlight to the head of the statue  at the front of the room.   Look at a mirror for a second or 2 and it will shift to 1 of a few preset positions, bouncing light into another mirror or the wall.  The only other mechanic involves keeping an eye out for the 5 artifacts hidden somewhere in the stages.

Besides just bouncing light around the room, you may occasionally be required to shine those beams of light at some unlit torches, which will trigger specific columns to lower into the ground, creating a new path for your beams.  Every stage is more complex than the last and while that should mean a greater challenge, I didn’t really find any puzzle that challenging.  The process of finding the right path is more about the process of elimination than anything else.  Turn a mirror, if it hits a wall…bad, if it hits a mirror…good.   It really is that simple.  The addition of finding the hidden items was nice touch, though they are fairly easy to spot(minus one tricky plate) and didn’t add much to the game. 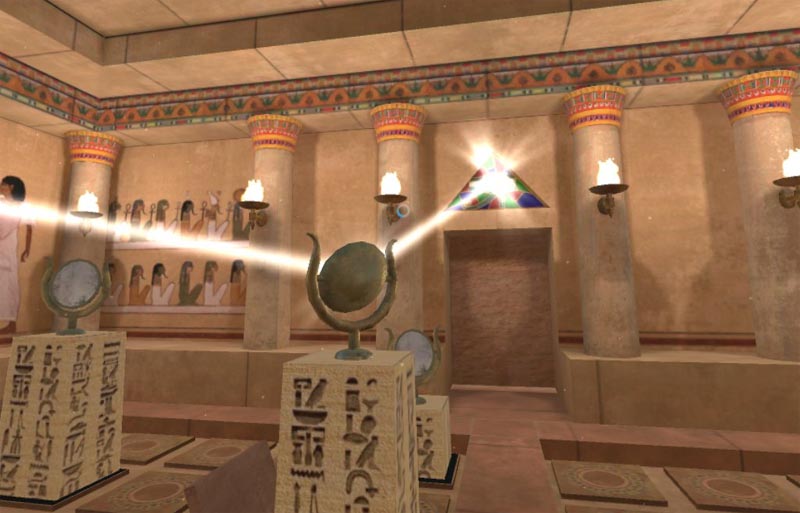 The light enters from the same place everytime, it’s up to you to direct to the other side.

The 2 settings you view look alright.  Outside the pyramid show off some ruins and a sandy desert and carries some nice details.  The looming pyramid looks “real” enough and the open doorway begs entering.  Inside the pyramid you are treated to a nicely detailed room, headed the large statue. Decorating the walls are some hieroglyphics adding to the feeling that you have stepped into an ancient building.   While the 2 settings looked good,  I would have liked a little more variety in the puzzle room, maybe just changing up the images on the walls or something minor.  There also isn’t much in the way of audio; Jane spout off a line about snakes upon entering the room and their is an Egyptian styled soundtrack which fits nicely with the overall theme of the game. 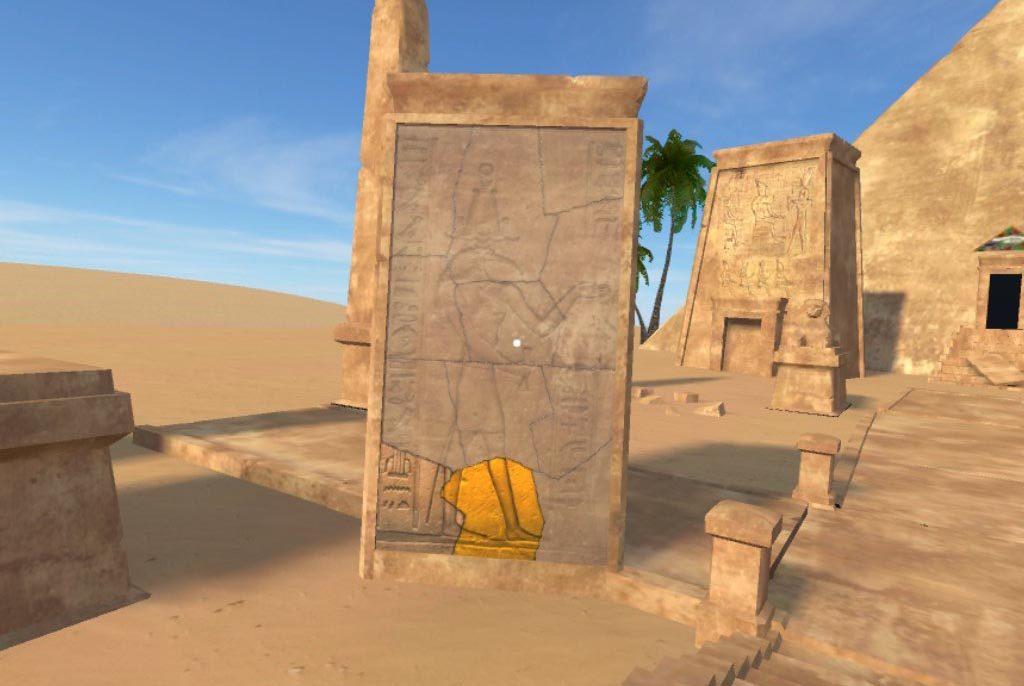 This is ultimately a very simple puzzle game, best suited for newbies to VR.  It’s a small puzzle title that accomplishes what it set out to do and nothing else.  I had fun while playing, but as I said, I never really felt challnged.  Still, if you like tickling your brain, even just a little, than this is probably worth a look.  Solving all 12 stages and finding all the items yields a slightly special end screen and the hidden treasure you seek.

What would I pay? The asking price is a dollar and what is offered here works!  I have zero issue charging charging a buck for this, it’s a small game for a small price and well worth it.

Beagle Games provided theVRgrid.com with a review code for this game, and regardless of  this review, we thank them for that!