Don’t you just hate it when you’re working a shift at the local grocery store, checking out items for anxious customers, and the fruit aisle comes to life and starts trashing your checkout desk? Well, now you can prepare for the citrusy apocalypse in VR! Until playing Shooty Fruity, I never realized how action-packed working at a grocery store could actually be. 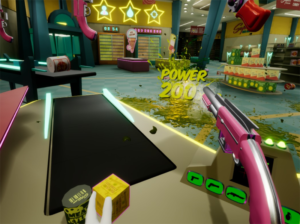 I first found myself at a table in the employee lounge when I heard a loudspeaker. It was the store’s manager, in a comically-nasally voice, telling me that I’d better get to work. I stepped behind the checkout counter, and saw groceries running down a conveyor belt. “It’s a little tough,” I thought, as I rushed to scan each item and send it down the conveyor to its customer, unprepared for what would come. “They’re coming from the air vents!” the manager said, after I sold my paycheck’s worth in groceries. Just as I grabbed a block of cheese, I saw something terrifying- a rather large green apple, grinning slyly, slowly bouncing down the aisle towards me.

In a rush of panic, I realized this was why a second conveyor belt was dangling M9 pistols above my head. I scanned the cheese as the evil apple shuffled closer. As it prepared to pounce, I reached up and plucked off a gun, like fruit from a tree. I flung my cheese down the conveyor belt, raised my weapon, and shot the apple in mid-air. Chunks of fruity viscera splattered all over the register, and apple juice spilled down the aisle. “Good job!” The manager said, in a tone that I couldn’t help laughing at. “But more are coming!” I grabbed a grenade, pulled the pin with my teeth, and threw it at a sneaky raspberry. While still scanning groceries, I continued shooting at fruit until the barrel of my gun shattered, bits of metal machinery clanging on the floor.

Fundamentally, Shooty Fruity is a wave shooter with the added distraction of checking out items. Doing so unlocks new weapons, which hover above you on a line of conveying hooks. You don’t reload your weapons in this game- rather, once your gun breaks, you grab a new one. Having to actually reach up and do so, instead of reloading your weapon, is a unique system that I enjoyed more than I expected. Once you’ve unlocked all the weapons, powerups are sent intermittently with the groceries. This way, you’re motivated to keep scanning them and to pay close attention while you do so, to make sure you’re not accidentally throwing a powerup down the conveyor belt.

Some levels have you working at a dining hall, throwing food-cubes onto color-coded trays, while blasting away fruit. While similar to the grocery store, this map provides an entirely fresh experience that mixes up the gameplay on a per-level basis, and keeps the game exciting. 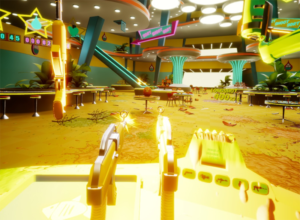 Shooty Fruity boasts a huge variety of shootable fruits, which all exhibit very different behaviors in their attacks. Apples and oranges leap onto your counter, while cherries explode and raspberries shoot their stems at you. There are many more fruity formidable foes that hunt you down with each level. Their diversity requires you choose weapons and prioritize targets accordingly, keeping the game fresh and addictive with every round.

Everything about the game is interactive and physics-driven. I couldn’t help but notice the excellent physics of smashing the ceramic mugs on the table in the main menu, as I cupped the broken shards in my hand. These physics translate into the actual gameplay- fruit can be grabbed and thrown back, even explosive cherries. Much of the store’s environment is destructible, as I learned when I was chastised by the manager for a stray grenade that annihilated the cereal aisle.

I was also intrigued by the options menu being located on an arcade machine, with an immersive joystick navigating it. Similarly, I purchased new weapons through a literal vending machine. On the level-select machine, pulling a lever opens a window into a carnival-style shooting gallery, right there in the main menu. This immersion factor and attention to detail alone are worth praise. Shooty Fruity’s gameplay and interface is some of the highest-quality I’ve seen in any VR title.

There aren’t many shooters on the Vive as well-polished as this. Weapons feel hefty, and shooting fruit- with crunchy sound design and attractive visuals- is some of the most satisfying combat I’ve felt in VR. The physics are excellent, and items feel interactive. Shooting a whole salad’s worth of homicidal fruit is brutal and challenging, and the sheer number of ingredients keeps the game from ever feeling repetitive. Shooty Fruity is an incredible game that I had an absolute blast playing, and I’m on the edge of my seat waiting for its full release next month. Any wave-shooter fans wanting a new and unique experience need to check this one out.

Dan Siegel
I am a student studying journalism, neuroscience, and anthropology. I’ve been incredibly passionate about video games my entire life, playing on my custom-built PC daily since 2010. My love of sc-fi-esque futuristic technology, and being enchanted by the HTC Vive’s media demos, led me to save up for a Vive in September 2016. I play it all the time, and take every opportunity to show it off. I’ve always loved writing thought-out reviews on Steam, and my journalism degree only helps me take this further. I think gaming customers deserve to understand the unbiased, complete story of whether or not they should spend their money on a game they’re interested in, and I take pride and pleasure in helping guide this understanding. I also love playing the didgeridoo, running, science, and EDM. Review Platforms: HTC Vive