One of the HTC Vive’s (and really VR in general) flagship titles has not only come out of ‘Early Access’, but has found its way to the PlayStation VR.  Raw Data  was released  during the Vive’s original launch window and received a lot of praise as being one of the best games available for the headset.  Well it’s been sometime since that release and we PSVR owners now get to experience Raw Data for ourselves and while the core game has remained largely intact, it’s not without flaws.  Long story short, it’s the future and something isn’t right with the world.  As you investigate the largest company on Earth, Eden Corporation, secrets are revealed that could shatter the foundations of society and rock the world to its core. 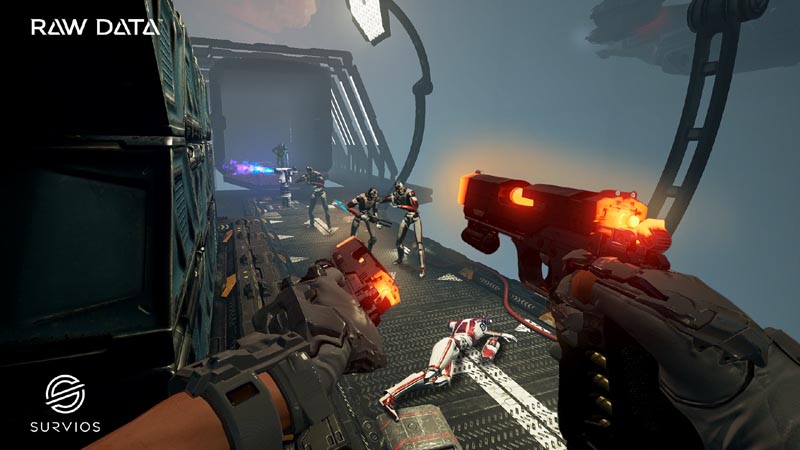 Once you see them, they never stop coming…until you beat that wave anyways

For those unfamiliar, Raw Data is a wave shooter unlike any other as it utilizes a host of gameplay options that spice this up and make it feel like no other game in the genre.  It’s a dual wielding affair using only the Move controllers to dispatch the robot baddies.  Default settings make use of teleportation which may be off putting to some (usually myself too) but in this instance I found I enjoyed it way more than walking option.  Walking is way slower and was actually a little complicated when combined with all the other options at your disposal. With walking turned on, you can choose either head or hand guiding, but both felt awkward and though hand turning worked great, you effectively lose the use of your hand while trying to navigate, needing to point in the direction you want to go.  Bottom line is that the control options are here to suit your play style, but for the first time I would say teleportation works best, especially when things get hectic…and they get FREAKING HECTIC.

Enemies come at you from all sides and like I said, you can move around the map.  Those of you that played DWVR will be very familiar with the navigation here, though this game is much more refined.  The opening 2 stages are the same level, but the way the enemies come at you and the game modes you play in make each feel fresh.  When the bots start coming at you, you’ll be teleporting around the room just to catch your breath as they attack in all manner of ways. Some just walk toward you to get close for a melee attack, others are armed with anything from pistols, rifles, rocket launchers and more.  Drones come at you from the sky, heck even some bots jump across the stage to try and take you out or crawl on the floor, sneaking up on you’re while busy looking elsewhere.  Latter stages open up offering more paths for the enemy to come at you and ramping up the difficulty. It’s a busy game that kept me on my toes throughout the entire playthrough. 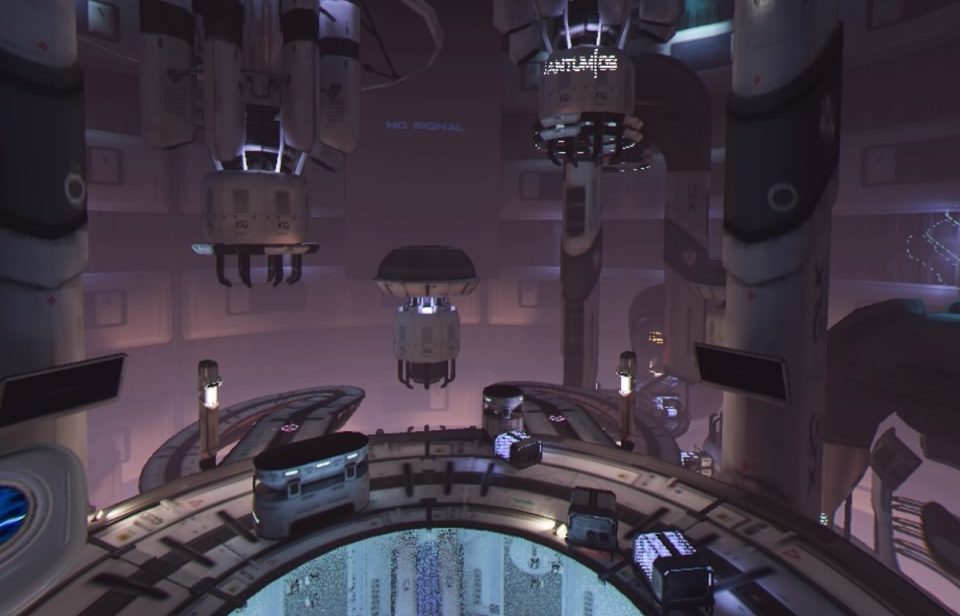 What separates this from your average shooter are a few very awesome additions that greatly expand the gameplay, the first being tower defence elements.   Picking certain points in each map and placing these precious defences aids you in missions where you must protect not only yourself but a data core that if destroyed, ends the level in failure.  As you kill enemies, you accrue points which can be spent on new defences and repairing the old ones.  Along with this is the character selection as each of the 4 playable ‘hackers’ has not only their unique attack, but powerups as well that make them feel different from one another.

Bishop, the pistol wielding hacker initially only gets one pistol but as the game progresses he unlocks both for some dual gun action.  Boss is armed with a shotgun that needs to be reloaded, requiring both hands to hold the gun to operate properly and Elder is armed with an energy bow and arrow, also requiring both hands to shoot.  Lastly is Saija, a robot armed with a laser sword who can deflect bullets as well as slice and dice the enemy.  Each has their own pro’s and cons, like Saija limited range balancing out his powerful swords or conversely; Bishops lesser powerful weapons but larger range.  Playing with them unlocks unique special abilities like temporarily turning pistols into machine guns or blasting surrounding enemies into the air to be dispatched at your mercy.  There are 6 abilities to unlock with each hacker so mess around and see which feels right to you. 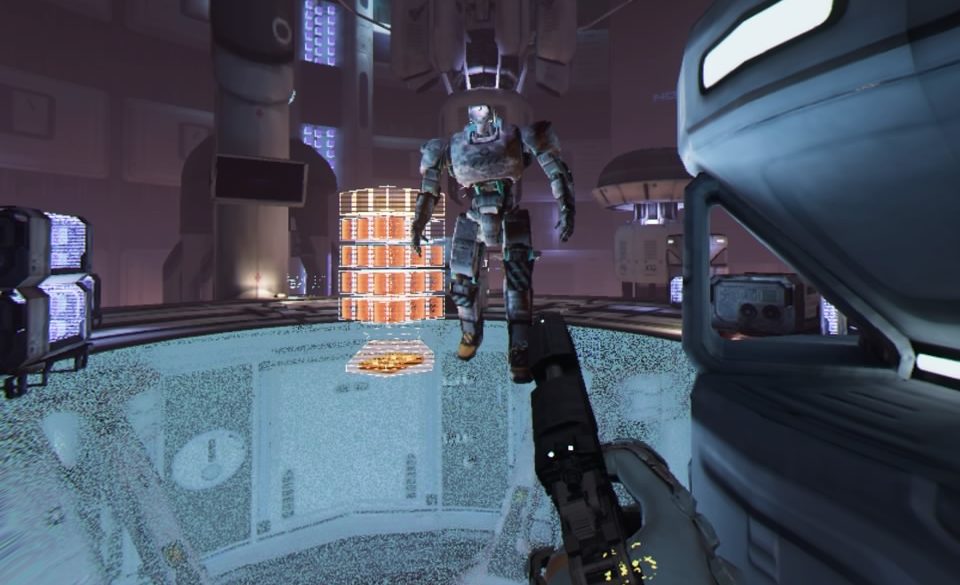 You know you are in trouble when these guys show up

The game itself looks good, but I think in the transition from PC to console, shortcuts were taken to make it work and the lack of a Pro patch shows as well.  It’s a busy game the character models look really good…when your really close, but back up just a few feet or just look at the backgrounds and aliasing is present all over the place.  It’s not game breaking, but it’s very noticeable, especially when playing on a PS4 pro and comparing it to similar, pro patched titles.  That said it still looks great with some nicely detailed levels, great lighting effects and host of smaller details that make this futuristic world seem real.  A wide variety of robots from basic androids to giant walking tanks pepper each wave and ensure you never get to comfortable fending enemy attacks.  The levels initially start off small and I was actually disheartened by their size, but at stage 4 things open up nicely and I found myself teleporting around the map like a mad man chasing down robots before they could gang up on me.  The 10 stages each have their own look and feel and the differences aren’t just aesthetic, but change they way you play from the previous arena.

I did have a few issues with Raw Data, the main one being the random glitchiness.  On multiple occasions my controls were frozen forcing me to eat damage until death, whereupon I was free to move again.  During tutorial missions I was forced to quit them because robots wouldn’t throw a punch, preventing me from dodging and completing the objective or robots endlessly spawned and not attacking until I just left and started the next campaign mission.  Heck the 1st time I loaded the game up, my controls were frozen forcing me to quit the game completely and restart it.  Teleporting works great, but on 2 separate occasions I was blasted across the map at a critical time forcing me to get back to where I was before the enemy swarm destroyed my core.  I also had trouble with the melee as my punches went unrecognized on many occasions, forcing me to just not bother with that aspect of the game.  None of these are game breaking, but when I experienced as many of these as I did in a 1-hour window, I couldn’t help but wonder if the team at Survios just had their friends and family quality test this game.  Hopefully it wont take to long for many of these issues to be patched and removed from the game. 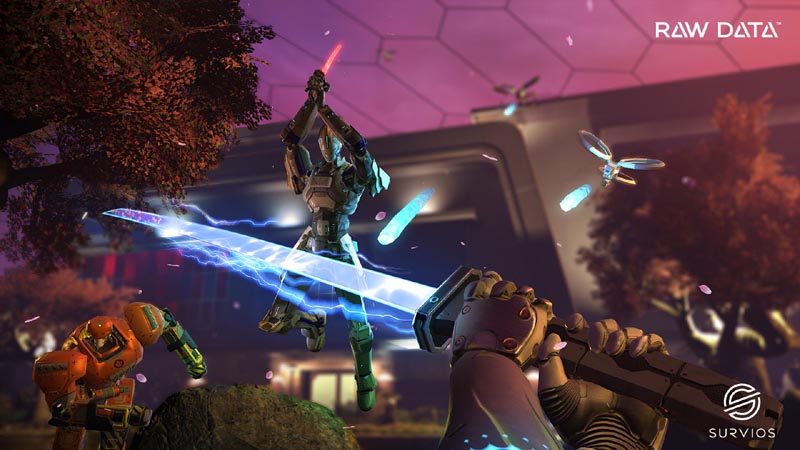 This pretty much sums up the game nicely

With 4 difficulty settings, online leaderboards and fun, action packed campaign it’s hard not to recommend this game, even with the issues I mentioned above.  Knowing how long this has been out and seeing the releases in that time have made me realize that almost every game in the genre borrowed something from Raw Data.  As far as single player wave shooters go, this is an amazing game that sets the bar for the genre and is a nice reminder of how lucky we are to get shooters like this.

What would I pay? The asking price of $40 is worth it considering the content and variety in gameplay.  It’s not just another wave shooter, it is THE wave shooter to which all other will be compared to from here on out.

Survios provided theVRgrid.com with a review code for this game and, regardless of this review, we thank them for that!