*This is an updated review of the entire game, including the DLC Alley Adventure which is an additional $7.99 US released November 14, 2017*

If you couldn’t guess by the title this is a collection of mini games all themed around carnival attractions.  This franchise has been around awhile dating back to 2007 for the Wii and from what I can tell, hasn’t seen too much evolution since then.  With that said some of the games would seem to be tailor made for VR and some do work great, but others feel like clones of other mini-games and wear out there welcome quickly. 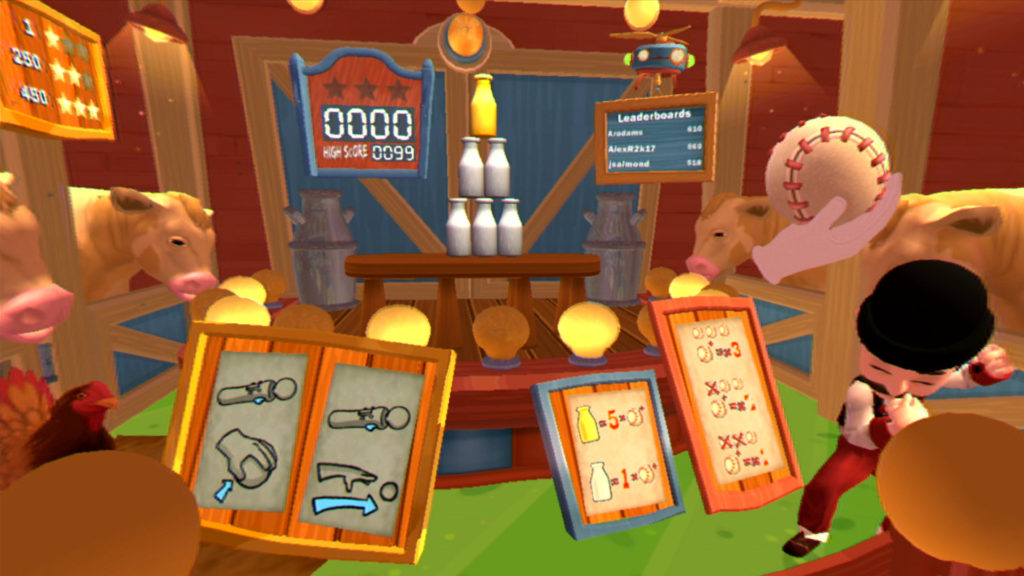 When it works, the ball tossing is pretty fun…when it doesn’t though, you’ll just get mad

The control scheme here only allows for 2 move controllers with no DS4 support, which makes a lot of sense given the actions you’ll need to perform.  You’ll be required to toss rings, throw balls, shoot guns, climb and perform a host of other single and 2 handed tasks.  Not everything tracks great and the game really needs a camera calibration screen as I was constantly adjusting my camera throughout my playthrough due tracking issues happening seemingly at random.  Still, since its initial release, the games tracking seems to have been improved and many issues i had a year ago have seemingly disappeared.

The visuals go for a very cartoony style with other patrons and the host guy all looking like offshoot Mii characters.  Nothing offensive, but everything you are seeing looks more like a cleaned-up Wii game from 10 years ago than something a little more modern.  The attractions themselves don’t fare any better, but they do the job enough to immerse you in whatever game you are attempting next.  The audio as well is completely forgettable with simple safe carnival music, ambient effects and so on.  The announcer guy, typical of mini game collections, repeats himself almost immediately and wears out his welcome fast.  Certain games have unique quotes but most of what he says, good or bad, is generically used in every game.  You’ll begin to ignore him soon enough. 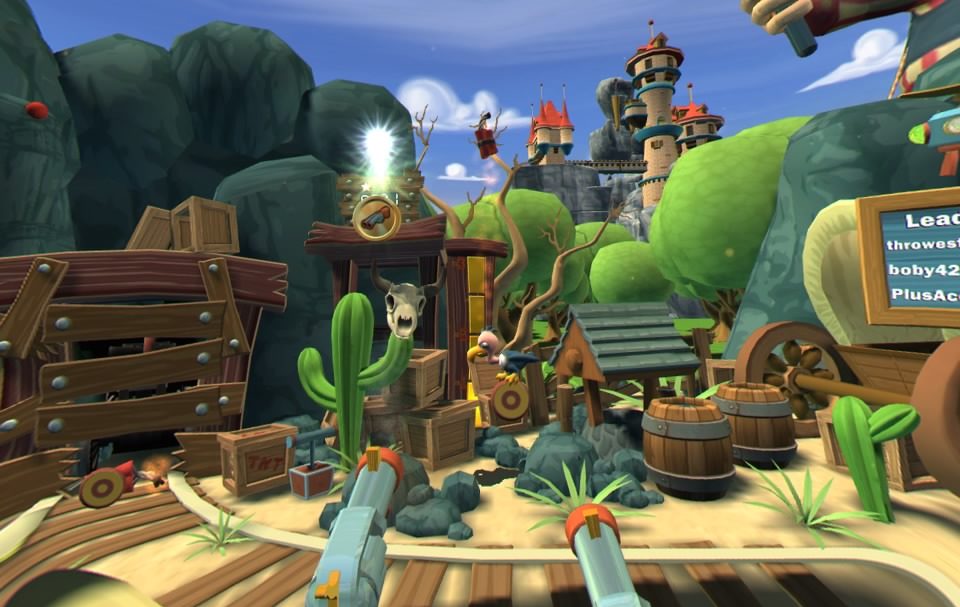 The shooting gallery portions are better games in this colleciton

The base game contains 12 mini-games and 4 differently themed zones along with a plethora of collectibles and a “play” area and at first glance there appears to be a decent amount of content.  However, not all that content is that great.  Each zone has only 2 games readily available, with all the other content in the game needing to be unlocked through in game purchases using tickets won at individual games (not real money).  Each zone (Cowboy,Sport, Wizard & Gizmo) contains 3 games with tickets won being used to unlock the 3rd game in each.  Because of this, unlocking those games will have you playing the one game in each zone that spits out the most tickets the fastest and ignoring the other game that takes more time and gives back less.  The Alley Adventure DLC includes 2 more zones and 6 more mini games and like the base game, a few are good and a few more are forgettable.

Throwing stuff (balls, rings…) at other stuff (targets, bottles…) is what comprises more than a few games here.  Certain games seem to have an automatic auto assist that helps you with the tasks at hand and while that may help with the points, I had difficulty making adjustments for better throws with my balls seemingly going exactly where I wanted sometimes and nowhere near where I wanted at others.  The assist seemed random with many of the games just working better than others.  It’s not to say the games are broken, but technical difficulties may hamper fun on a few occasions, steering you toward the games that just play smoother.

Other game modes include a climbing stage, very reminiscent of what was in ‘Robinson’ (review here) though not nearly as refined, a shooting gallery and a stacking game requiring you to catch as many pancakes on your plates without them toppling over and a roller coaster haunted house that plays the like a G-rated version of ‘Rush of Blood’.  Everything here works for the most part, and while some may suffer from some odd mechanics, almost all the games are worth a play or 2 before moving on.  Leaderboards show up as well comparing your scores to friends and global players. 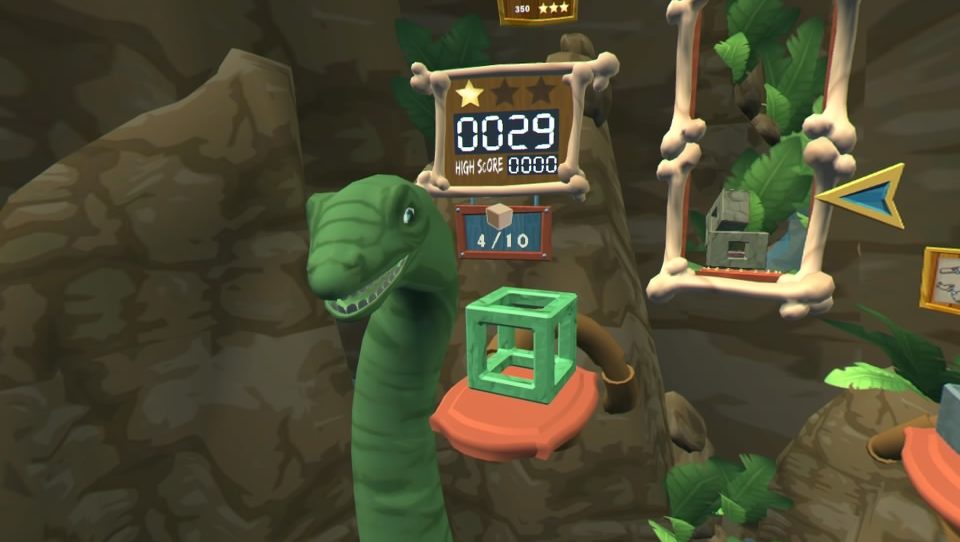 You gotta drop those blocks at your feet and build that tower as high as you can!

The new DLC adds a little more fluff, but a few gems as well.  In the new Cosmic Corner area we are treated to a neat little shooting gallery where you need to suck in1 of a few shapes and than shoot it back at the matching target.  It’s frenetic and fun.  The 2nd is a pool game that challenges you to sink singular shots and was instantly forgettable.  The last is a mini golf game that works better than it should considering its part of a mini game collection.  It plays very well turning a move controller into a golf club and someone somewhere needs to take this base mechanic and make full fledged mini golf game.  Jurassic Junction only has 1 gem and it’s not the horseshoe or ball toss  game.  The fun addition here is the block stacking game where you drop some odd shapes blocks below you onto the back of a dinosaur, the goal being to build the highest tower you can.  I liked the sense of scale here as well as the challenge of stacking and the game even gives you a side view of your tower to see just how high you are making it.

Each time you complete a game you are rewarded with tickets used to unlock more games or prizes.  The Playroom allows you to place and play with your prizes with displays, trampolines and a roller coaster you can place your trophies in.   It’s more fluff than anything else, but if you care about unlocking everything you’ll enjoy this area.  Also, I noticed that the load times in between sections  were super fast, so I did appreciate that. 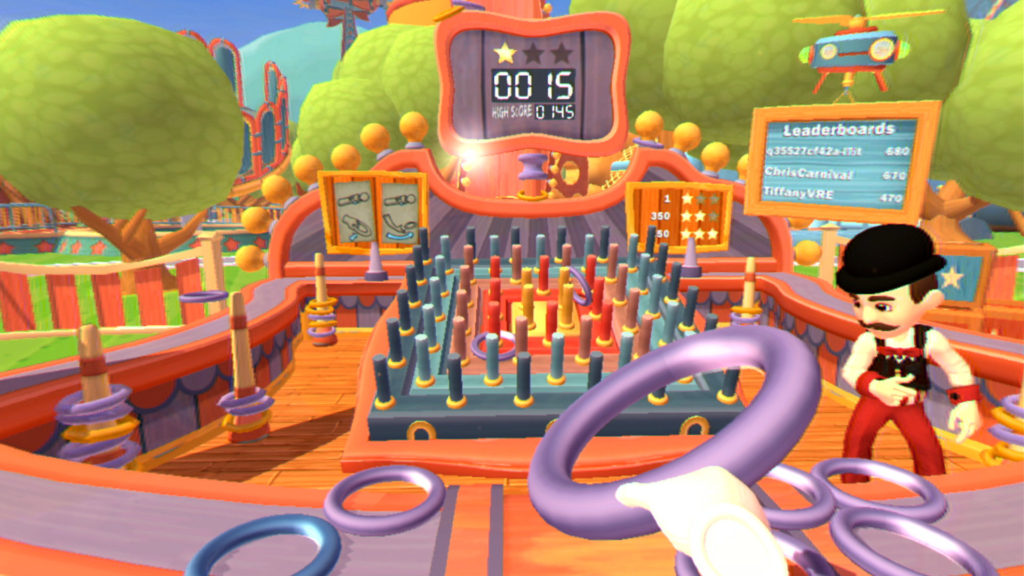 Ring toss felt like the most accurate game and had me coming back for more and more!

Overall this is a fun game collection and while some games (climbing in my case) are 1 and done experiences none of them are downright terrible and the ones that do work are pretty fun.  This is best played with friends for sure and switching off a to see who can get the highest score on any of the games always makes for a good time.  Even playing alone there is enough here to keep you entertained and while it’s not the most amazing collection and some games feel similar to others, the standouts are quite fun and make this a great casual VR game.

What would I pay?  While it can be fun at times, $20 for the base game and $8 for the DLC seems a bit high for the available content and dropping these to $15 and $5 respectively seems like a more reasonable price.  That said there arent a lot of party games and when the game works, it works pretty good and when you find the one that grabs you, you’ll be playing way longer than intended.