Lookin’ to shoot some baddies? Well you get to do that here, but it may not be quite as fulfilling as you like.  What’s offered up is a turret shooter utilizing only 1 PS Move controller (no other option available) with 3 different stages and 5 different difficulty settings.  You can easily beat this game in an hour and only a masochist would want to play through this more than once.  The recent addition of a small multiplayer component was added in a recent update as well. 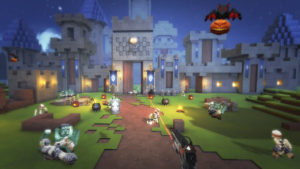 If you think this looks fun, you’re wrong…really, really wrong!

First off you are immediately thrown into the menu to select one of 3 stages, each unlocked after the previous one is beaten.  So select stage 1 and you are off, no story, no introduction to the world, just shoot stuff.  I was shocked to find out this was made for the PSVR, why you ask? Because it looks like a Gear VR game.  Using a minecraftian(it’s a word!) art style with a little more detail, you are treated to very blocky, very pixelated enemies.  The 3 different environments look the same and although you can defend it as an art style choice, it’s way below the quality you would expect from PSVR.  You see almost all the enemies during stage 1 with the only real difference being the bosses.  Each level has a very nice looking boss, until it moves.  Animations on all the sprites here are broken.  Enemies jerk like they are being electrocuted, watching them navigate steps had me laughing out loud, it’s terrible.

The audio as well is lacking.  With one MIDI track over-layed over the game, the music gets old fast.  Added to that (or I guess subtracted really?!) is the lack of decent audio effects.  Enemies are quiet and subdued or make no noise at all.  Effects are bland and boring and while your guns make okay noise, everything else sounds like it was downloaded from a free sound effects website.

Enemies spawn all around the map in front of you and slowly creep up to your position.  Once any enemy is within a certain range specific to their type, they will attack you by shooting/throwing something at you.  At normal difficulty I had no problem dispatching enemies and projectiles (except the final boss).  Throughout each level ghosts appear holding coins or health to shoot (don’t shoot the angels!) and in between rounds, 6 per stage, you can purchase power ups and weapons to aid you.  Shooting mechanics also fail for a few reasons; your bullets take a small time to travel so fast enemies may be hard to hit, bullets may often pass right though enemies forcing more shots than you should need. You also have a laser site so targeting is very easy. 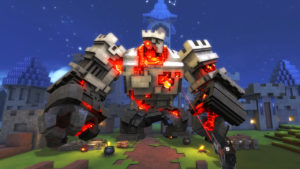 The bosses are the best looking enemies in this game, but fighting them becomes an exercise in repetition.

Update(Mar 20, 2017) This game now supports local multiplayer so while you the shooter are still on your pedestal, stationary as always, a 2nd player can grab a DS4 controller and become an enemy.  This action only takes place on 1 exclusive multiplayer map which to me was the biggest misstep to this additional mode. The ability to join in on the campaign would have spiced the single player up immensely, instead this is a completely stand alone experience. The 2nd player has the ability to choose his enemy type as well as camouflage so you could be a box or tree sneaking ever closer to the tower.  It is a welcome addition, but with only 1 small map to play on, it definitely  feels like an afterthought.

It’s not fun. Boring, repetitive, short  are all perfectly apt words to describe this game. The world makes no sense as you fight off skeletons, bats, witches and dragons, some armed with guns, others magic, while you use Sniper Rifles and grenade launchers to dispatch them.  It feels like you have been transported to a fantasy world with modern day weaponry and it doesn’t work. The local multiplayer is nice, but won’t add much more than a few minutes of play time in it’s current state.

What would I pay? $5 is the most I would pay.  There is a little fun here, but with so little reward to and some busted mechanics, its a tough sell at full price