Jupiteration is a sci-fi wave shooter that feels cliche and low-budget, but regularly surprised me with how fun it actually is. Although it’s yet another generic wave shooter, the action in Jupiteration is extremely fun and kept me engrossed until the very end. This game is truly an ugly duckling, and if you give it your attention, it rewards you with impressively visceral gunplay.

Jupiteration feels like a low-budget “Space Pirate Trainer,” pitting you against endless enemies in a 180-degree frontal view. These vary between several flying saucers or enemy spaceships, ground troops that look like toy soldiers, and mouse-sized aliens resembling spiders. The variety in enemies keeps combat diverse, boasting a formidable range of attacks. 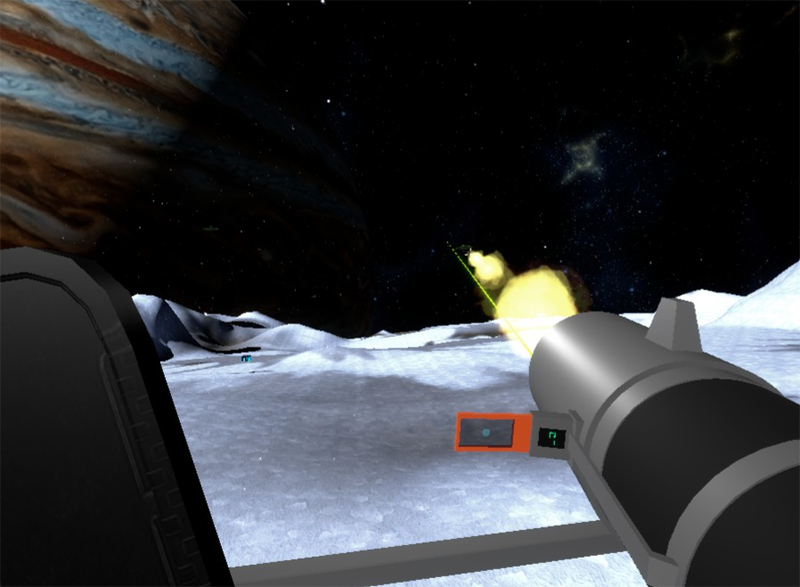 Finding a rocket launcher offers a badass-feeling opportunity to level the playing field.

Some enemies drop powerups, which either enhance your gun or give you a new weapon. These include the minigun, lock-on rocket launcher, sniper rifle, and plasma-orb launcher. These are all well-designed, and using them feels extremely brutal. Using one of these weapons can mean the difference between life or death, and finding one is always exciting.

When not using a special weapon, the player holds a laser pistol in one hand and a shield in the other. The pistol feels hefty and satisfying to use, and blowing up enemies is rewarding. This is surprising given its cartoony, minimalist design, and its cliche “pew-pew” noise when shooting. The shield is effective at blocking bullets, and the back of it displays information, such as health and the current wave. 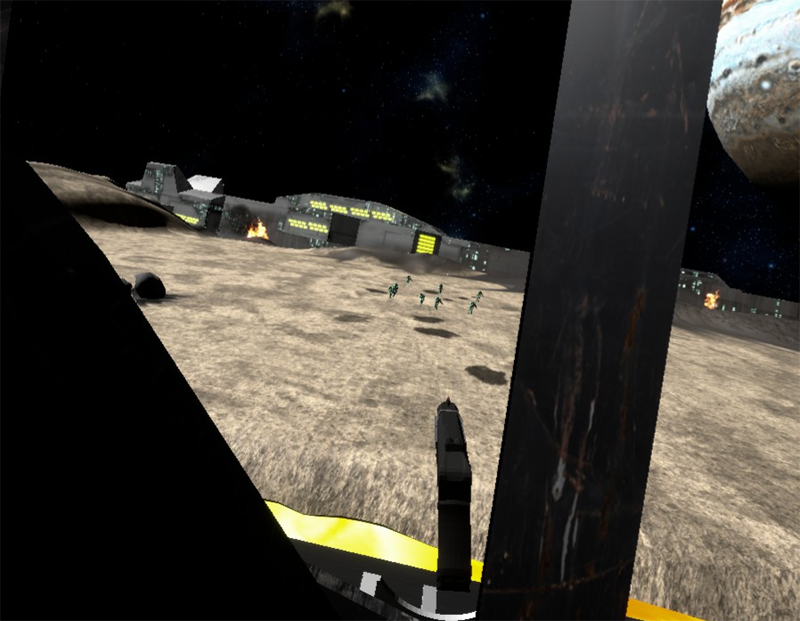 Despite having the gameplay of nearly any generic VR wave shooter, Jupiteration is split across five levels (each with six waves) in a campaign format. The game puts you through each level in sequence, with a huge and intimidating boss at the end of each. The environments of each map feel wildly different from each other, each with unique configurations of enemies. This prevented me from feeling bored throughout the 45 minutes it took me to beat Jupiteration, and even adds replay value.

Jupiteration’s graphics are terrible, with flat and smudgy textures resembling games from the early 2000’s. Its user interface feels cheaply designed, but is nonetheless user-friendly. While unnattractive, the game’s design and graphics give a false impression of how fun the game is. If you avoid judging this book by its cover, you’re in for a short-but-sweet shooter treat.

What would I pay for it?  Jupiteration doesn’t do very much to stand out from the endless horde of wave shooters, with one exception: its price. While cheaply designed, this is a fun, replayable wave-shooter with satisfying combat and a decent variety of maps. I’d pay five bucks, perhaps more if additional levels were added.