The Gallery is a game about exploration, puzzle solving and navigating a tropical island.   The game plays out in a very traditional style with you picking up items and clues in your quest to solve the islands mysteries.  The mechanics are traditional for a First Person Game and it’s a genre you have definitely played before, but in VR it’s definitely something to experience. 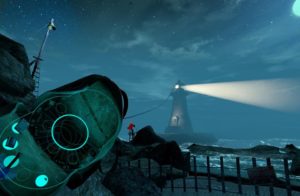 You are tasked with finding your sister after she went missing on an abandoned island while searching for a lost artefact.  You awaken to find yourself next to a shipwreck and walking around its clear that you are not alone.  A nearby campsite still has a fire blazing and music playing and you quickly stumble upon a cave where you find information about your sister and a crazed, drunk and paranoid old scientist that she has been in contact with on the island. This game presents interesting puzzles and secrets through notes and cassette tapes, which was especially enjoyable having used the tapes myself IRL as a kid.

Most of the objects found in “The Gallery” can be picked up (like starfish or empty bottles ) or interacted with ( fireworks, popcorn or notes). The game indicates which item is valuable and which is not by drawing a white border for junk, and a blue border for useful items that can be stored in the backpack. The backpack is also an interesting mechanic in The Gallery. Reaching over your back and grabbing with a trigger button pulls out a see-through backpack. Storing collectable items is done by placing it in the centre of the backpack (where, I assume, a giant black hole consumes it!) and selecting items is done by pulling the trigger button and selecting an item with the character’s finger. The best part about the backpack is that you don’t have to always hold it – placing it in the air locks it in place and you can browse your collectables at ease. Moving away from the backpack returns it on your back.

The mechanics, visuals and audio work together beautifully here. Most of the clues are hidden in notes and cassettes. Bringing the cassette player next to your ear and you can hear the recording more clearly; bring a note too close to a candle and it will burn beyond recognition.   Puzzles range from the super simple to the overly complex with a few taking a lot of time to figure out.  Some levels have secrets that don’t take much time to solve while others don’t have puzzles at all. so it would be a lot more fun to have a few more really challenging puzzles.  The first few minutes I was exploring the island I found a popcorn pan, put it over the fire and the popcorn started popping.  Small details like this really had me quickly immersed in the game. 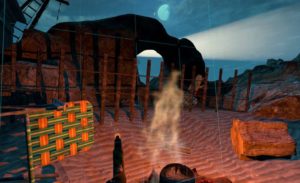 After a long day there is nothing better than Spiffy Pop Popcorn…next to a shipwreck.

Currently The Gallery is only features one episode so I didn’t expect much but even so this game isn’t without flaws.  Quickly after the first level the player is forced to trek through a sewer system which had some oddities. I found a lot of interesting drawings and a few items which seemed to have no real purpose and wasted my time.  The sewers had a map that says “Secret stash” on it but I was unable to find the stash, even though I was standing right on the ‘X’.  Another element introduced was Morse Code which seemed to have no real use, in this chapter anyways.  Lastly the characters are under developed, and though I expect to learn more about them in later episodes, a little more info about them now would have gone a long way.

All in all, it is a really fun experience and I would recommend it to anyone that has a few hours to kill casually enjoying this beautiful game (and if you do, go shoot some fireworks on the beach and chill). The game isn’t long, taking no more than 2 hours to complete and it will leave you wanting more.

What would I pay?  Currently this game is at a price tag of 20$ on steam and worth every penny. Grab it, enjoy it and support the developers (and pressure the dev’s to work on the 2nd episode!).