When it comes to VR, that extra immersion factor has led me too making a sort of to-do list when it comes to what I want to experience in VR be it floating through space, wing-suiting down mountains, swimming through the ruins of the titanic and so many more.  One thing I don’t think I have done yet is fly on the back of a dragon and now, thanks to Dragonride VR, not only can I do that, but can also shoot down targets with crossbows, play a Beat Saber type rhythm game, go on egg hunts and a few other dragon specific activities that just wouldn’t be as good if not for VR. 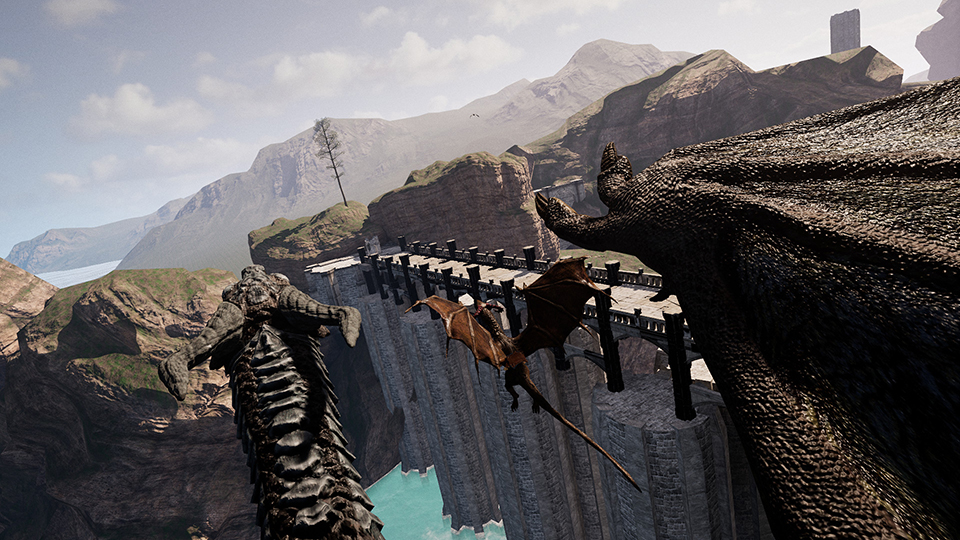 Take a ride on the back of a dragon!

With several different game modes to choose from, there’s a fair a bit of content to get through.  Once you are in the main menu, it’s as simple as selecting which map and mode you want or selecting the quick play option at the bottom and your off.  1st up is the rhythm portion which plays very similar to Beat Saber only you are on the back of a dragon as you fly around the map using 2 swords to swipe at the matching colored balloons spawning ahead of you with each balloon having an arrow indicating which direction you need to swipe.  There are 25 songs to choose, from a wide variety of genres, and while none of them are songs you know (outside of the paid for Tea Party DLC) they are of decent quality.  Those songs also come with a variety of modifiers including difficulty, how the dragon flies (straight to wild) and score modifiers to make things easier or more challenging.  Target shooting is exactly that with you once again riding the back of a dragon while shooting targets and balloons in either timed or lap specific matches.  Additional shot powerups are hidden around the map as well adding 9 different, temporary shots to your arsenal that help you climb the global leaderboards.  Egg Hunt tasks you with finding glowing eggs hidden around the map before time runs out and, in this mode, you control the dragon in 3rd person.  Balloon is a similar mode that scatters and spawns balloons randomly around the map for the dragon to shoot or fly through before the clock winds down.  Freefly let’s you explore the maps at your leisure and includes smaller mini-games and hidden secrets with Dragon Ride taking you on a pre-set tour of a map and Panoramic Views placing you at scenic points in each map, allowing you take in the view.  There’s actually a ton of content to get through and while that’s great, unfortunately the quality of said content is a bit of a mixed bag. 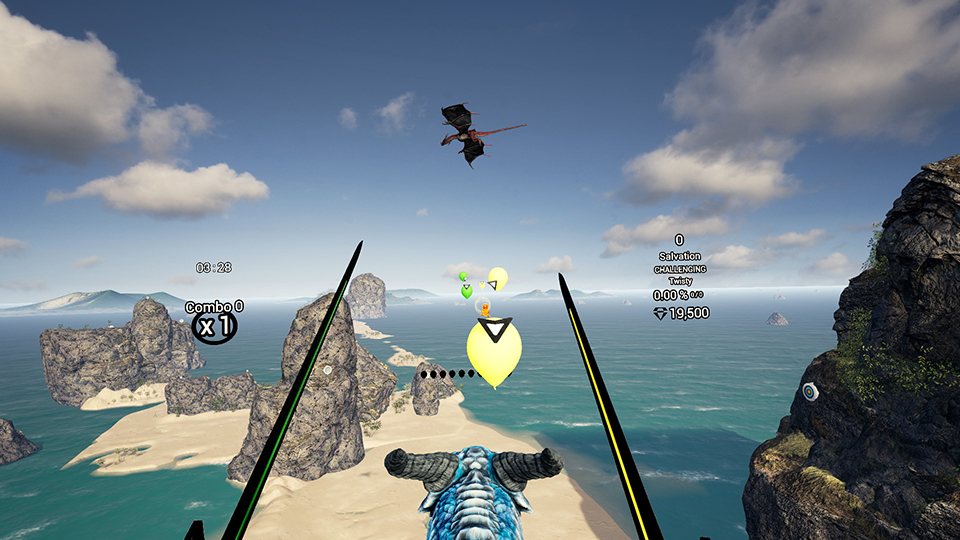 It’s time to get your VR rhythm on!

The Panoramic View stuff works just fine, as does the dragon ride though I found some moments during the ride to be a bit awkward thanks to some sharper turns that just made the flight not quite feel proper, but this was a minor issue.  The Rhythm stuff is serviceable, but the balloons offer next to no visual feedback and just disappear once hit making for what should be a very satisfying VR moment anything but.  Egg Hunt also plays as advertised though the 3rd person controls of the dragon are also a bit confusing, and I found the eggs to be easy to find thanks to the fact they glow and are fairly easy to spot despite the large size of the maps.  Target Shooting is a good time but suffers from those predetermined, slightly janky flight courses and obtrusive crosshairs, the latter of which can be customized in the options menu.  Those obtuse 3rd person controls carry over to the other modes that use it and while I am complaining a lot right now, let me stress that nothing in here is broken, it just feels a little undercooked at times.  Contrary to my issues are the 10 maps you can choose from, the various modifiers for each mode, the fact there is 7 different modes to choose from, secrets and mini-games scattered around each map, leaderboards, walking and swimming areas and all of that is in a surprisingly (mostly) great looking game. 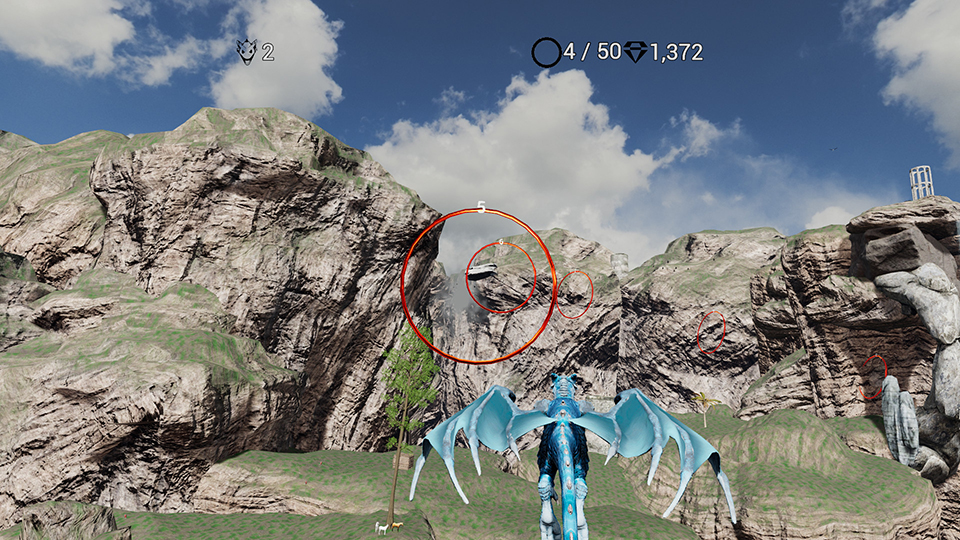 Explore at map at your leisure…in 3rd person mode.

What impressed me the most is the overall visual quality in the dragons and landscapes you fly over.  Each of the 10 stages looks totally different from the other (minus 2 of the same theme) so depending on what you choose, you can fly over cliffsides, castles, deserts, volcanic islands, ice worlds and more with every single one of them looks fully realized.  No joke when I say some of the environments are near photo-realistic in their quality and while that doesn’t cover all visual aspects, I was still impressed by what was on display.  The targets you shoot crumble and bounce off the ground below them, other dragons fly around each area and can be spotted just chilling on the ground as well.  Each stage is rife with smaller details like ruined statues, man-made structures like towers and pyramids surrounded by endless deserts or seas with all of this being accompanied by some excellent lighting effects that only adds to the realism.  It’s not Kayak Mirage levels of realism but is way better than I expected from a game called Dragonride VR.  It’s not all wonderful as the sky backgrounds look like low resolution jpegs, the baby dragons look cartoonishly silly (though not necessarily bad), some of the assets, especially the wildlife, look lesser quality and the closer up panoramic views do highlight some of the flatter textures used, but as I said, I was quite impressed with the visual quality here. 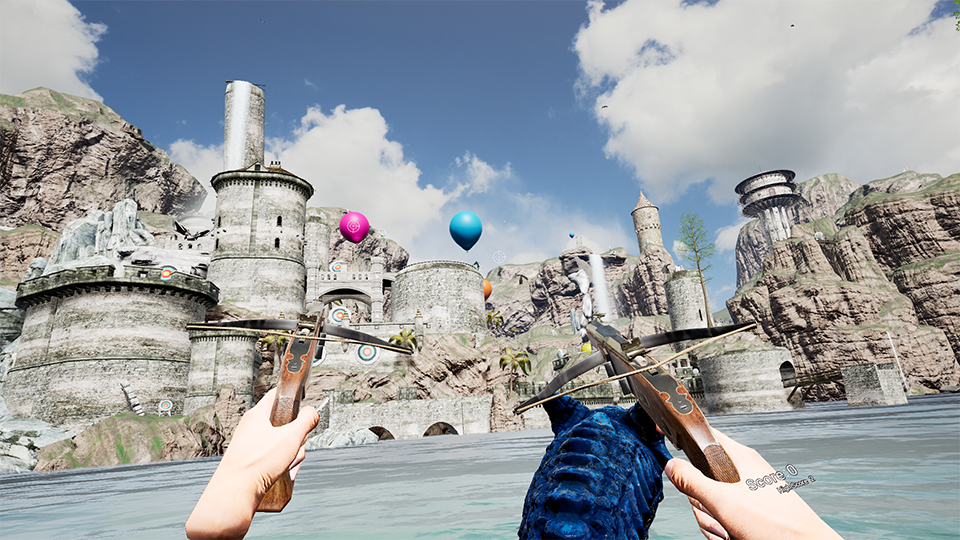 Hitting those targets is trickier than you’d think!

There are 25 songs in the base version of the game across a wide variety of genres making it so there should be something here for everyone.  If you only care for a few of those genres than the selection of songs you’ll want to slash balloons too might be fairly small though this does suppoer Beat Sabers custom maps so you can your faves at your leisure.  I didn’t really notice anything too much in the spatial or 3D audio area, though in truth it’s not really needed here as the action is either happening right in front of you or there just isn’t too much else going on. 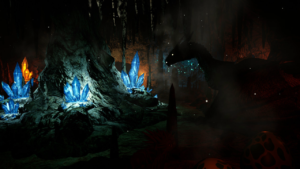 While I am pleasantly surprised by the Dragonride package, I do need to stress that I went into this with fairly low expectations.  I don’t mean that as a knock against the game but given the relatively unknown dev team, smaller price and length it was in early access for, I kind of just figured it would be just another throwaway VR title, which I guess it still sort of is?  What I mean by that is while it does have an impressive amount of content and play modes, none of them are great, leaving me with a game I had fun with, but had little desire to return too.  Despite my misgivings though, this is still one heck of a jack of all trades, master of none type VR package and probably worth looking into and like I said, it’s really pretty.

What would I pay?  This is $15 US so if the idea of flying on the back of a dragon appeals to you, then that is great price.  There is a lot of content to chew through and even if you just did everything once, it’ll still take a few hours. If what I’ve said has you turned off, it’s great game to show to someone new to VR.

TypeEh Studios provided The VR Grid with a press code for this title and, regardless of this review, we thank them for that!