Zero gravity seems to get a little bit of love in VR with games like Lone Echo and Detached offering a couple different takes on adventures in space.  Added to the zero-g list of games is Downward Spiral Horus Station, which has you in the role of the lone survivor of some kind of disaster on said space station and it’s up to you to restore Horus Station into somewhat operational order and survive all at the same time.  There is a free prequel available in the steam store that fills in a little back story apparently, but as I write this review, I have not played that just yet. 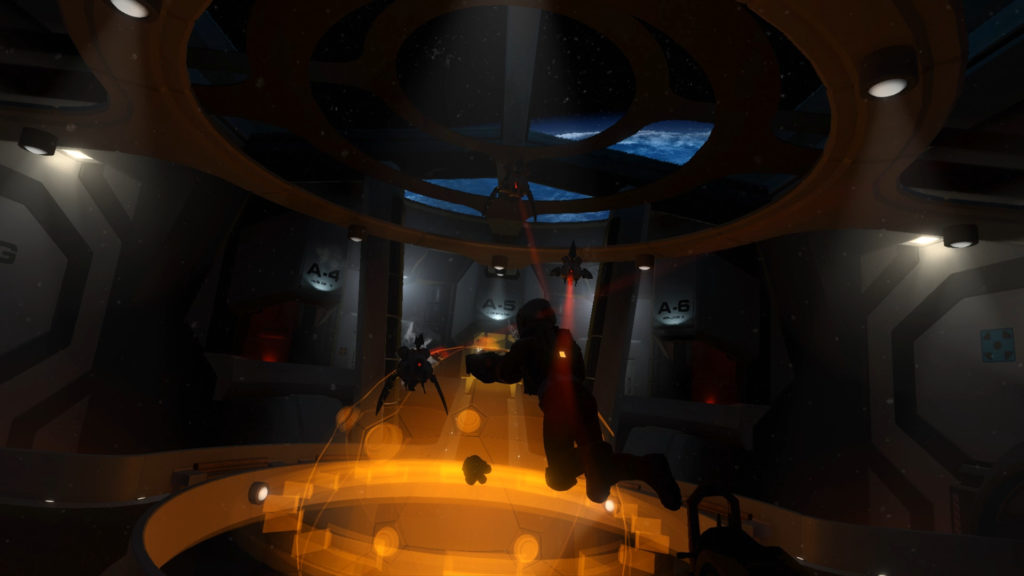 Movement is largely based on shooting a grappling gun, though you can push off and grab any surface, so you are going to need a couple of Motion controllers for this one.  Initially, it’s just you pushing off the walls to float forward, but soon enough you get a grapple gun which slowly drags you toward whatever you have attached it too and toward the latter half of the game you get some jets that propel you around the stages grapple free.  The grapple mechanic is a great idea and does take some time to get used to, though once I did, it did feel a little slow.  For those who may have disliked Detached for its difficult controls, Downward Spiral’s free-floating movement system is much more contained thanks that grapple and ends up being a unique way to navigate the station.  Click-turning is your only option which is a little disappointing considering just immersive this game tries to make you.  While the grapple gun works great, pushing and small adjustments using your hands is a lot more finicky.  No matter how many times I tried, I never quite pushed in the direction I wanted go and it’s very easy to get caught up in the environment, which disables your grappler, forcing you to climb out of the whatever it is you stuck in, or physically move in the real-world.  Every time this happened, it annoyed and ruins your presence in game as you realize that your body is essentially immaterial.

There are 3 ways to play through the campaign, alone with enemy robots turned on, which adds a combat element as these little, freaky, drones come at you and try to kill you.  You will find some weapons throughout the 8-stage campaign, each more powerful then the last and adding drones is a great way to ramp up the intensity in the game as you can only take 1 or 2 hits at most.  Should you want to avoid combat, Downward Spiral can be played without combat if you just wish to focus on the light exploration and light puzzle solving but for me takes away from the fun factor.  Either of those methods can be played solo, or with a buddy making the campaign a ton more fun as you and your buddy float around the derelict vessel.  There are 2 other online modes available in the form of Deathmatch and Horde mode and each is exactly as it sounds.  Deathmatch pits you against another person while Horde has you and a buddy defending from hordes of drones. 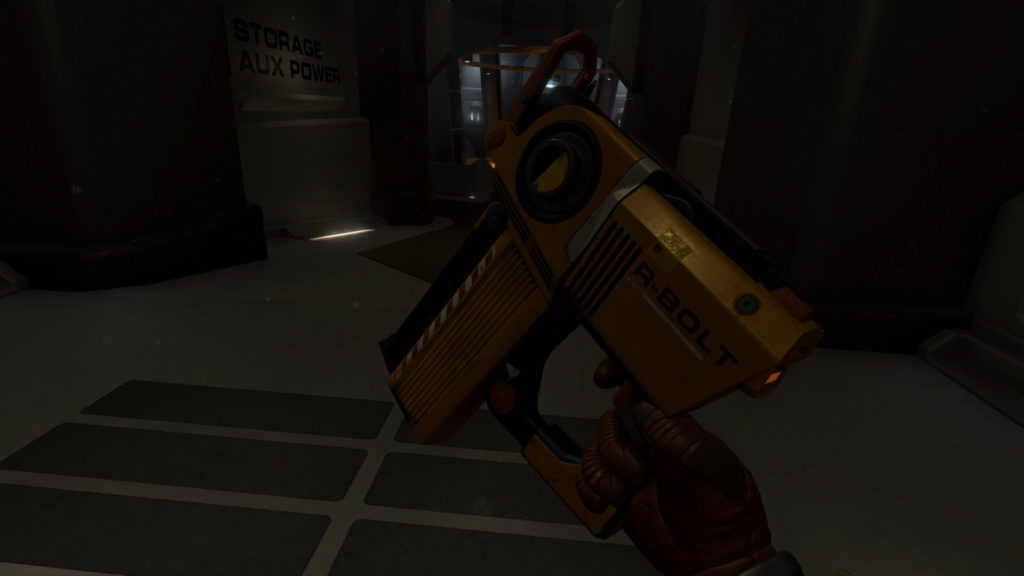 Say hello to my little friend!!

Downward Spiral looks great with the derelict station containing some solid, sporadic lighting that adds to the creep factor that pervades the game.  Areas range from small corridors, large rooms and even the vastness of space making the larger environments feel very fresh.  Items float all around you, and maybe get in the way of your grappler, but the destruction in the station and the detritus floating around further hammers home that your situation is anything but ideal.  Drones are typically round(ish) robots that tend to B-line it to you making their attack patterns predictable, though some do behave more or less aggressively.  Smaller additions like having your flashlight and menu options as buttons on your right arm that require you physically press them with your left give some extra bit of immersion. I loved the look of the game, and once again urge you to play with drones on as it adds to the unease and keeps you on the edge of your seat.   Audio is spot on too, but mostly just effects that fit the action and an occasional warning noise as enemies approach.

Downward Spiral would appear to be a game about exploration but is actually a very linear tale.  Doors marked in red or don’t have handles can’t be accessed and can basically be ignored.  I made the mistake early on in my play of turning knobs for way to long near a giant red door in the hopes of unlocking it, not realizing at the time just how obvious the devs tried to tell me to move on.  Switches, buttons and levers will unlock doors and new sections of the station, but these are never puzzles so much as fetch quests to either find power cells or item you’ll need and once you leave an area behind, there is no reason to return.  There is a feeling of progression, but the story elements are shallow with your next objective just coming from view screens scattered throughout the station.  There are some interlude scenes that take place on a planet, but more often then not left me more confused as to the story than filling in any narrative gaps.  Collision detection is also a prevalent issue and I often found myself inside objects and the environments. 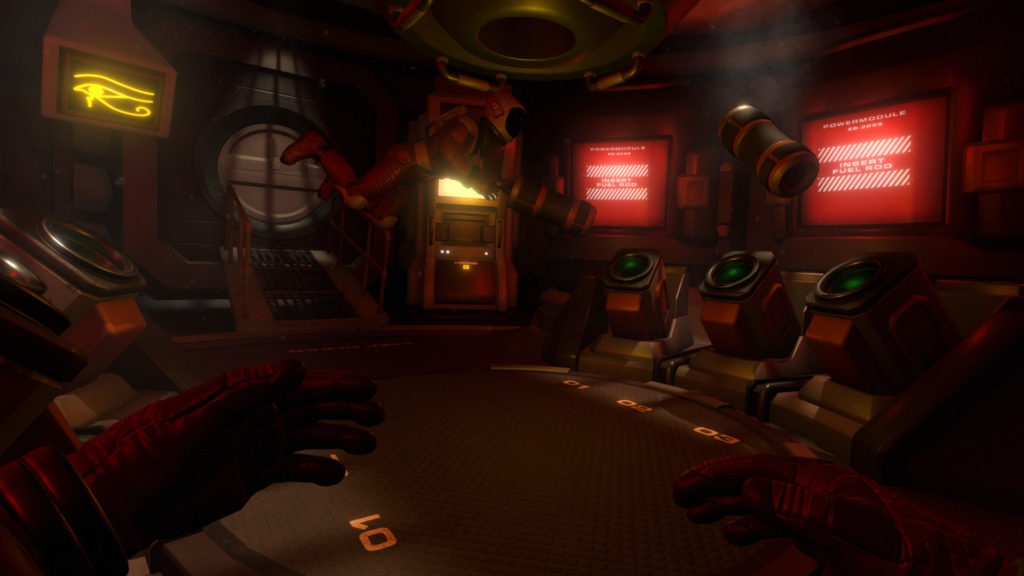 Playing through the campaign should take you roughly 4 hours and probably less then that if you buddy up.   I enjoyed my time in Horus Station, but this may not be everyone’s cup o’ tea so to speak.  Navigation is intentionally slow which I know will drive some people nuts and while I really dug the grappler mechanic, some might still wish for a more traditional FPS.  The story, though sparse, still intrigued me and some of the environments are breathtaking, especially in the void of space.  I’ll say it a 3rd time that you should play with combat turned on as it greatly adds to the entertainment value even though you have unlimited lives thanks to a respawn(clone?) checkpoint system in place.   Overall, I appreciated what Downward Spiral put before my eyes and enjoyed my time in the game.  The grappler mechanic is great, intuitive and makes this game a little better then your average explorative shooter.

What would I pay?  The $20 asking price for this is great and I was entertained throughout the entirety of the game.  The pace is slow, as is the movement system, but if you can look past that and enjoy the zero-gravity combat (turn the bots on!) the single player campaign justifies the price with added multiplayer content just being the icing on the cake.

3rd Eye Studio Provided The VR Grid with a review code for this title and, regardless of this review, we thank them for that!