Dark Legion puts you in the shoes of a military man charged with finding an energy source for your downed space ship as you, and you co-pilot, are travelling back to Earth after a successful mission.  It doesn’t take too long before you stumble across some creatures bent on your destruction and a conspiracy that could endanger humanity.  It’s all first-person shooter action here and once the action starts, it doesn’t let up until the games conclusion. 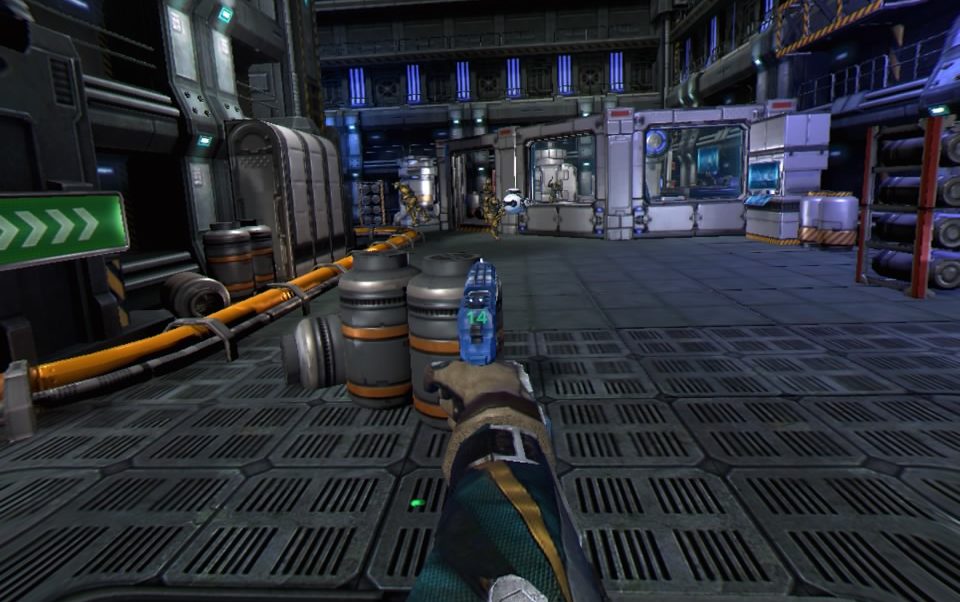 Line em up and take em down

With two Move controllers you navigate around the maps in classic first-person action.  There is an option for smooth walking, but it is significantly slower then teleporting with no option for turning other than of the snap variety.  When the game starts you are in a training facility where you can familiarize yourself with the controls and weapons and almost all the mechanics you will see in the game are present in this area.  There is a firing range with all the games guns already available with unlimited ammo so feel free to fire at some moving targets with reckless abandon.  As you accrue new weapons in the campaign, they are stored on a belt at roughly waist level and can be grabbed at any time.  Getting low on health?  Found in crates scattered all over the stages are needles which require you to equip it and in inject it in your left wrist and is a nice way to increase the immersion in the game.  You can dual wield by dropping the gun in your left hand into your right hand, then cycling through the weapons using the Move button on the controller…it’s a clunky system, but it works.  There is also a magic element to the game that I almost entirely skipped opting instead for good old-fashioned weapons, but basically just involves activating it, and releasing a large blast, but I like I said, I never used it.

Dark Legion is not the prettiest game I have ever seen, but it’s not awful.  It does look and feel like the assets used were purchased at a discount and then smashed together into a game, but they work.  The opening area is a grey planet with a very open night sky.  You’ll soon be attacked by bugs and larger creatures as you traverse through a cave system, encounter a boss and continue to a portal that leads you to the second area, a space station.  Typical of a space station, everything is sterile looking and recycled, and instead of fighting crazed animals, you are now tasked with taking out human bad guys armed with guns.  The enemy soldiers only seem come in one model, with a blue or red color palette, and depending on what they are armed with determines their tactics.  Nothing in Dark Legion is going to blow you away but considering just how budget of a shooter this is, it’s hard not to forgive it for its many visual shortcomings. 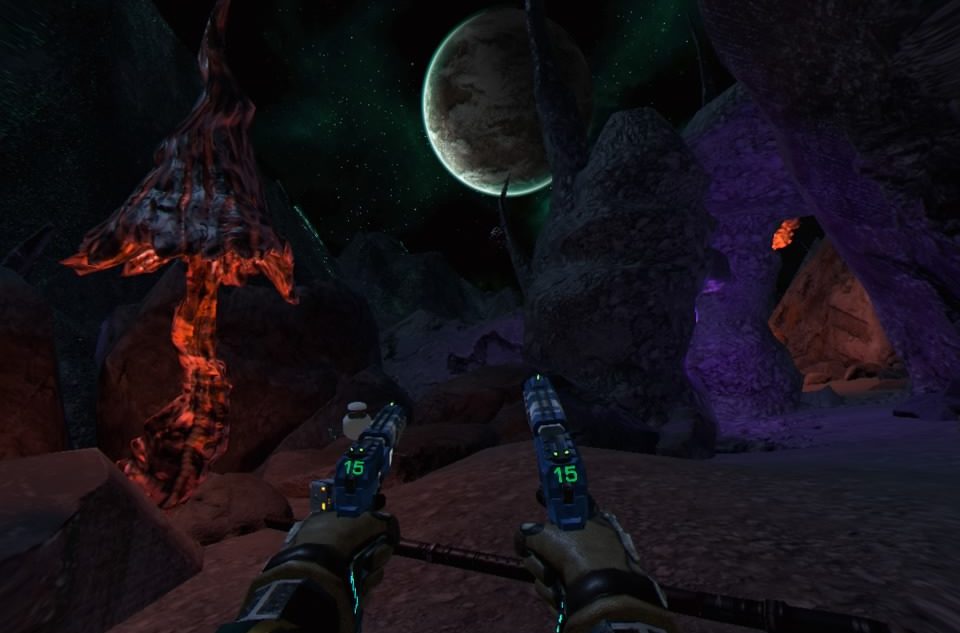 If you want to waste the ammo, feel free to dual wield!

Sound Effects are the only source of sound in Dark Legion as there is no music played during the campaign.  Instead it’s the sound of enemies as they react to your presence that permeates the campaign. You’ll hear bugs pop out of the ground or some weird Minotaur creature bellow before he charges your way.  Once you hit the human characters you’ll hear soldiers spout out a line about how they know you are there or they are going to blow your brains out.  These lines repeat themselves very quickly and reminded me of Storm Troopers from Star Wars.  Speaking of Star Wars, whenever the action starts to ramp up (ie a boss battle) your characters breathing changes from something you hear if you breathed through a mask to a straight up Darth Vader breathing noise that sounds identical to one the galaxies greatest villains and I laughed every time it popped up.  My last issue with the audio is your droid companion who constantly makes this annoying droid shifting sound throughout the entire campaign, it’s unavoidable and never lets up and if the devs fix anything here, fix that sound!

Besides shooting baddies and looting crates, you will on a few occasions have to arm some explosives to open doors, open doors with access codes found lying around or by pulling on a massive lever.  It’s bare bones stuff and the emphasis in Dark Legion is clearly on the action.  Scattered around each stage are tablets which will either have door code written on them or give a 1-page account of what happened leading up to your arrival on the planet.  These survivor accounts are also amusing, if not for the broken English used, but because each tablet has only a few sentences making these things seem like very expensive pieces of paper.  By the time I finished the game, just shy of 2-hours, I had uncovered the mystery leading up to the final boss and accrued a ridiculous amount of health that I almost never needed to use. 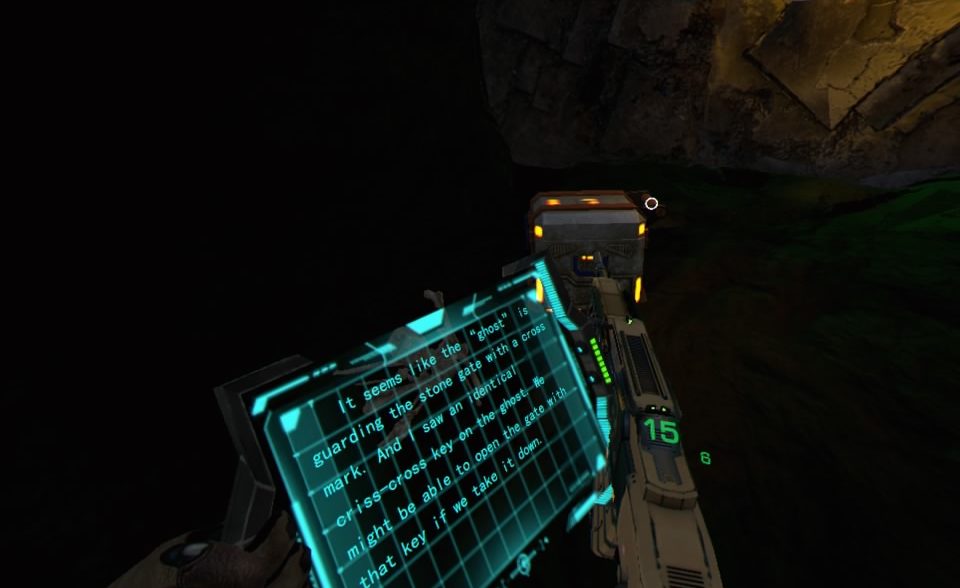 You’ll be finding these a lot throughout the game

I’d be remiss if I didn’t bring up a few issues I had while playing.  On 2 occasions I managed to walk of an edge causing me to fall forever until I quit the game, and reloaded, whereupon I started back up almost exactly where I left.  Every enemy is programmed to act in 1 way; animals run at you, snipers stay at a distance and don’t move, soldiers take cover (I don’t think they change positions either) and dudes with body shields slowly walk toward you. It’s incredibly easy to exploit the AI here minimizing difficulty.  One boss type ignores you unless you are directly in his field of vision and any bullets or projectiles fired your way can be dodged by a slight tilt of your head.  Your one-piece bathing suit trainer lady is laughably sexualized and made me think, “if that’s military issue than I must be wearing a speedo”.  Grabbing items off you belt is a pain and no matter what gun you have, just a flick of the wrist reloads it. It’s very easy to pick at any one thing in Dark Legion, and tear it apart, but when looked at as a whole, the game still kinda works. 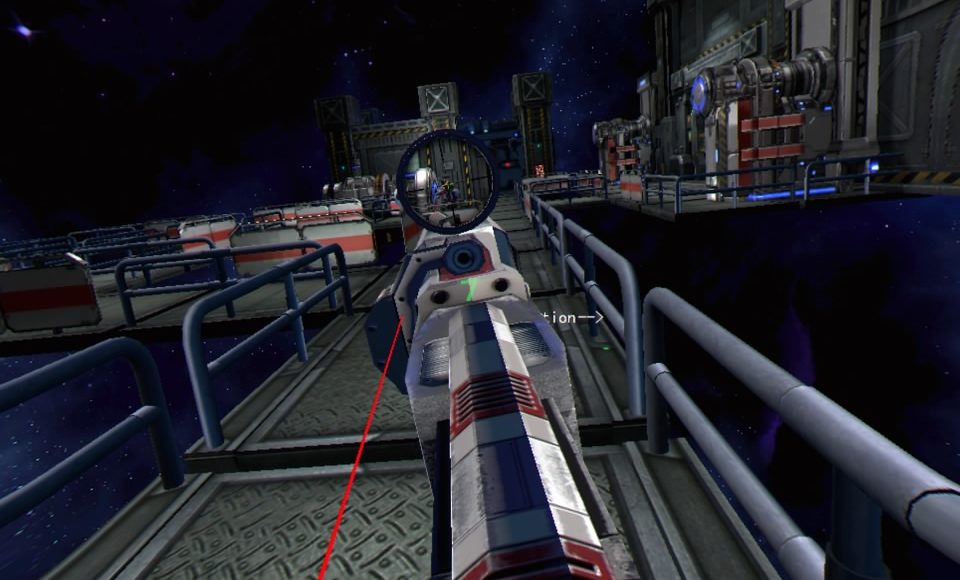 That really the final statement…it works.  It’s not polished and it’s not too long but it does scratch that campaign style First-person shooter itch.  Dark Legion is not going to wow you in any real way, but if you are looking for a dual-wielding shooter than this isn’t half bad

What would I pay?   At $10, I say pick this up.  The budget price on this allowed to me to forgive many of the shortcoming presented and I enjoyed the game for what it is.  A short little romp in VR that let me kill a bunch of baddies with a few different types of weapons and made me feel like a bad ass.