I was fortunate enough to have recently reviewed the first Dead Secret game for the PSVR and while it showed its very early VR roots, it was still a solid mystery puzzler with an engrossing narrative.   Dead Secret Circle is a direct sequel to the first title so for those that may be interested in this, I urge you to play the first title as it will help you a lot in understanding the protagonists struggles in this one.  Suffice to say this is a murder mystery unlike most others and aims to improve upon it’s predecessor in almost every way. 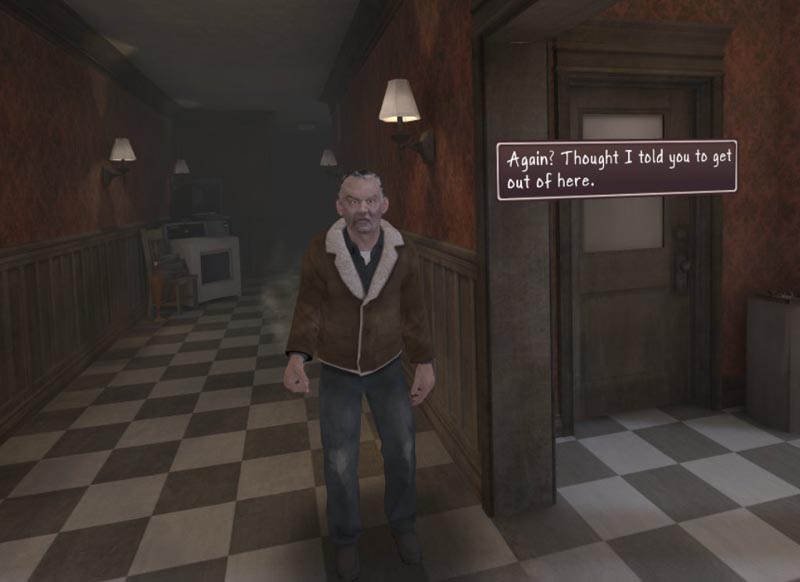 There is a lot more interaction this time around!

Right away I noticed the controls as the first game featured a way-point based system which did hamper immersion.  This time, you get full freedom of movement around the environment with either the headset, touch controller or gamepad.  Additionally, you can also turn in the game with a press of a button (on a controller) meaning, should you choose, you can play this seated or standing.  It’s unfortunate that there is no option for smooth turning but considering how many first-person titles for mobile headsets don’t feature any kind of turn option, I’ll take the click-turning offered here.  A small reticle mapped to the center of the headset or aimable with the touch controller lets you highlight objects that you can interact with.  The game takes notes for you and keeps an objective log on a notepad, should you forget what it is you should be doing at that time.  Items found appear in a wheel menu that you can refer to or activate to use.

Dead Secret Circle looks really good.  While the first game only featured one environment, an abandoned house, this one has a larger main area to explore, an apartment building, as well as the main characters apartment.  The apartment building is condemned, run down and weathered, much like the residents and everything here gives off a haunting and lonely vibe.  You play through dream sequences that mostly take place in the same real-world areas but are cast under a red hue and have a very cool visual of being “disassembled” at the edges of your vision.  It’s hard to describe, but as you walk forward the levels comes together as if being built before your eyes and is a very cool effect.  You have a body, though it can be hard to see just looking down but find a mirror and once again you can check yourself out, a feature which greatly adds to the immersion. 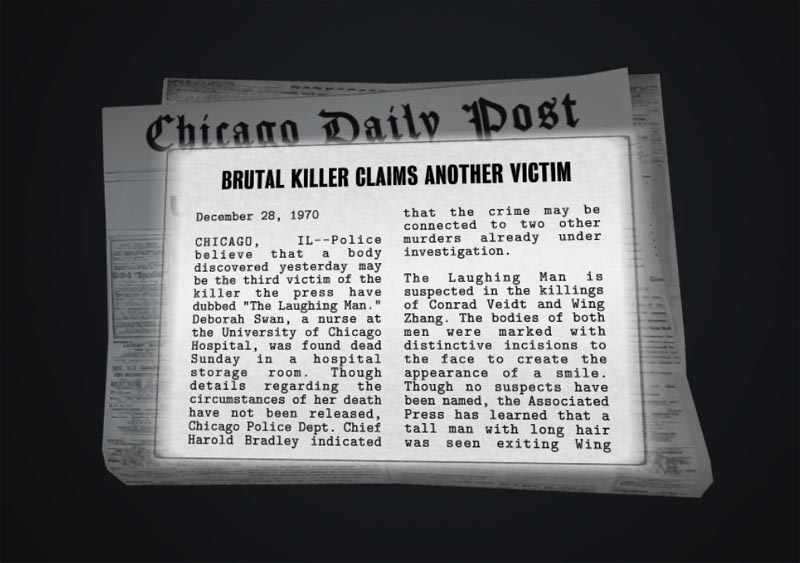 There is a fair bit of reading in here, but it’s worth it!

Suspense needs solid audio, and this delivers in spades.  All the characters, including yourself, are voiced and have eccentric and sometimes over the top personalities that are very entertaining.   Whether it be an English writer, a protective mother or a very conservative couple, the people you meet are all very intriguing in their own way.  The music that plays is well timed and fits what’s happening nicely and the killer’s theme when ever he/she shows up is a tell tale sign to get moving and hide.

Taking place 5 years after the original game, you play once again as Patricia Gable a reporter still reeling from the events half a decade earlier.  A grisly murder or 2 in headlines captures your interest and an errant clue sends you to the apartment.  Now you can interview the residents using a series of notes/clues to ask them key questions about what they might know about the mystery.  Each stage is broken up by days with a task you need to accomplish to push the story forward.  At night you collect what you have learned through a series of questions and sleep, whereupon the story still advances through a series of bizarre dreams.  The Killer, know as The Laughing Man, is freaky character and the way he/she pops up throughout the story is very interesting.  As you progress through the story, clues begin to fall into place until the dramatic conclusion when the killer is confronted. 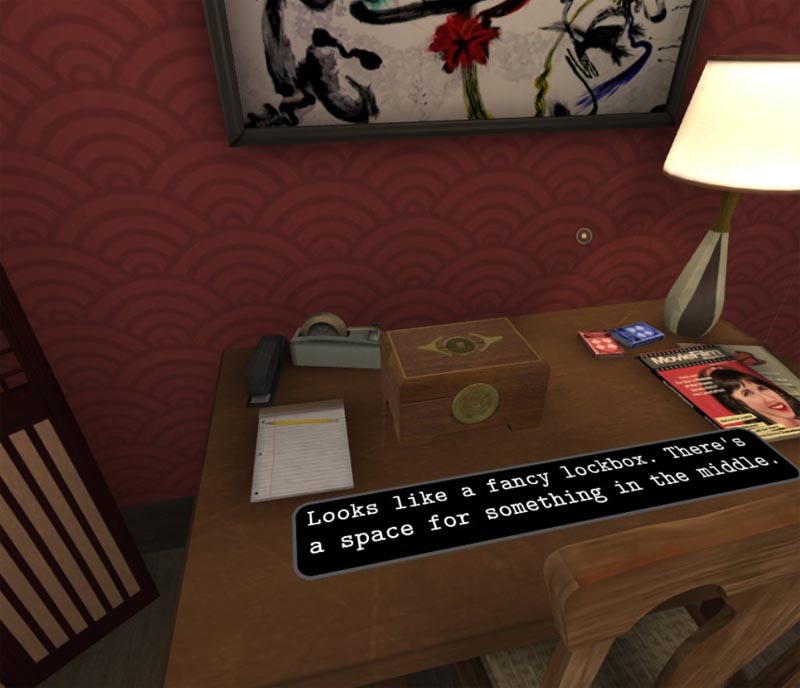 One thing that has always bugged me in horror games with no combat is that the scares are often scripted minimizing the freak factor. This is not the case in Dead Secret Circle and the investigative nature of the entire game provides a constant state of suspense.  It’s a testament to the games design that the scares and suspenseful moments work as well as they do.  Collecting the clues is fun as every little clue sheds light on the who the killer is or isn’t.  The added element of interviewing the residents and stumbling across their own secrets also lends itself well to making this a solid mystery title.  Puzzles litter the game, whether it be moving objects into a specific location or matching and combining found items to bypass an environmental obstacle.  The puzzle placement does get a little amusing as it does seem ridiculous at times to have so many people with so many obtuse puzzles, but they are fun and challenging so I can forgive their absurdity.

Besides the slightly ridiculous puzzles, I can’t say I had to many issues.  You walk relatively slow, but this is very intentional and does add to those climax moments when they happen.  I found myself getting caught on the environment a fair bit, but that never stopped me for more than a second or 2 as I adjusted my position and carrier onward.  I will say it again, if you haven’t played the first game, play it.  Dead Secret Circle does a decent job of catching you up on those events, but it’s still better to play through them then learning about them for the 1st time though audio logs in this game.  The campaign has also been expanded as by the time I had reached the end, I had logged in around 5 hours. 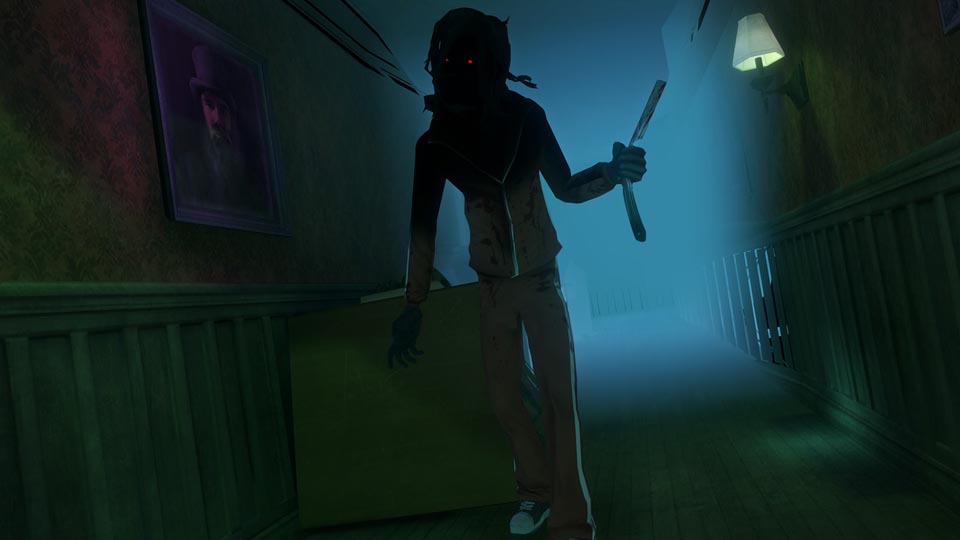 If you let him get this close, you are already dead!

Dead Secret Circle does what many sequels fail to do, follow up with a game that is better in every way when compared its predecessor.  Mystery, suspense, horror and even some action bits make this a must buy for fans of these types of games.  It’s an engrossing story that build upon the events of the first game, the puzzles are challenging, and the narrative is intriguing all the way to the games finish.

What would I pay?  $15 puts this on the more pricey side of games for the Gear VR or Go headsets and it is worth every penny.  This is an interactive movie with you as the main character and solving the mysteries here is some great fun.

ROBOT INVADER provided The VR Grid with a review code for this title and, regardless of this review, we thank them for that!