The Room is a franchise that has been around since 2012, has seen multiple releases across multiple platforms and has won many awards for its refined puzzle solving formula.  8 years later and we can now experience this franchise in VR with an entirely new story and mechanics only available from our headsets.  The year is 1908 and you are a detective investigating the disappearance of an archaeologist(?) last seen at the museum investigating some ancient Egyptian artifacts. 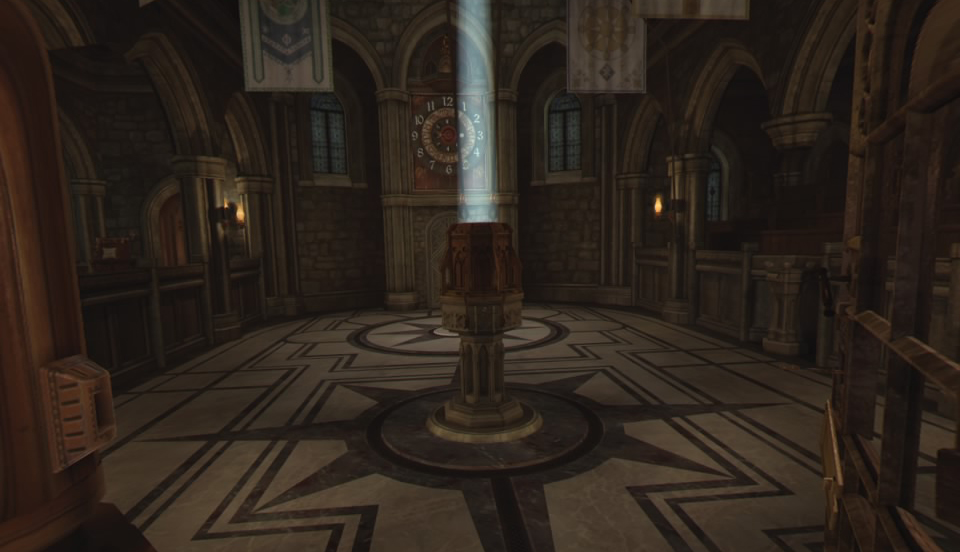 Every room offers a series of simple and complex puzzles

Moves or DS4 are supported but if you have them, Moves are the way to go.  Either method gives you a tracked hand needed to grab and manipulate objects but with the limited tracking of the lightbar on the DS4, I often ran into tracking issues that are absent with Moves.  With some adjustments, I did navigate through stages somewhat smoothly but having 2 fully tracked hands over 1 is just the way to go.  Both methods controls the same with each of the 6 stages being a room or series of rooms broken up by node points which means it’s teleportation only.  That makes sense given the nature of the game as you really only need to travel from puzzle to puzzle but the click-turning really interfered with my enjoyment as the node teleportation always defaults you to specific view when you move to it often making me lose my bearings for a second whenever I moved.  I don’t want to be to harsh on the controls here, but I would love to see some additional options to accommodate more seasoned VR players.  The puzzles in question come in an unprecedented variety and while some of the mechanics repeat themselves, every conundrum feels unique and with every puzzle solved I was looking forward to the next mental roadblock.  You’ll be pushing and pulling levers, turning cranks, making potions, fixing clocks, organs, solving light directed puzzles, viewing alternate realities and so many more different puzzle types that I found myself always looking forward to whatever the game was going to throw at me next. 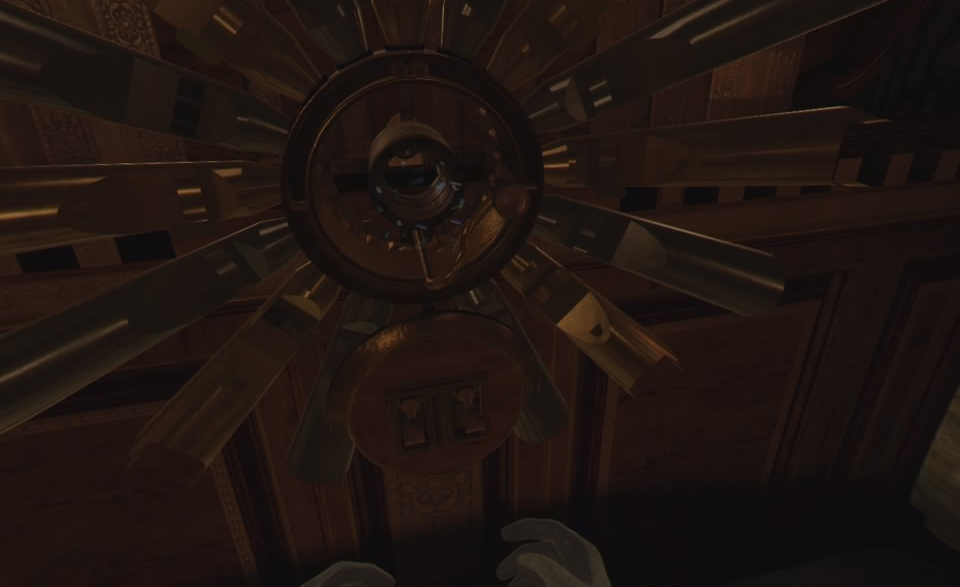 It’s time to go inside the machine!

On the presentation side of things, The Room looks pretty damned good.  Each stage is thematically different from each other so every time you conquer one levels puzzles, the next offers up a whole new set of challenges that fit that stages motif.  You’ll start off in your detective’s office where the game teaches you all the games mechanics and soon enough you’re off to the museum, a church and few more surprises that I won’t spoil here.   Lightning may light up a scene for a second or solving a puzzle may reveal a more complex one behind it loaded with gears to mess around with.  A late game ability let’s you travel inside items adding a whole new way to arrive at your solutions.  Apparitions from the past also show up in spectral visions that both aid your efforts and push the narrative along and were a treat whenever they popped up.  Every item whether it be a small wooden statue or an entire room has been carefully created with a large attention paid to the smaller details and while some of the textures in the background might be lacking in a few scenes, the overall quality in the presentation is fairly high.

The audio is also on point though is fairly cerebral with music only playing during brief cut scenes leaving you with solving puzzles in near silence save for the natural sounds off the room you are in and the effects of whatever it is you are touching. With that said, everything sounds exactly as it should and that supernatural element I mentioned earlier adds a fair bit of suspense to each scene as you don’t always know what’s going to happen next. 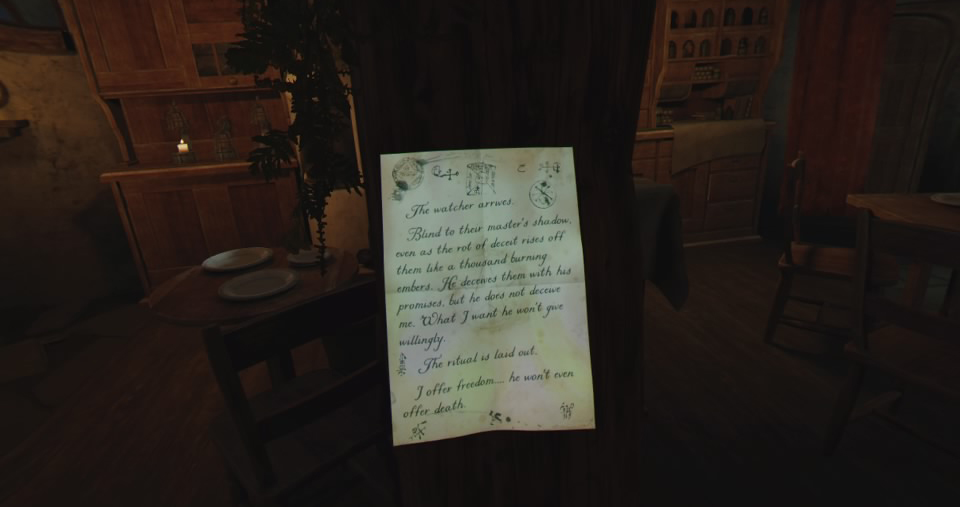 You’ll have to read a bunch of these to uncover the full mystery.

The Room, despite the restrictive controls, was a very enjoyable escape room type game with puzzles on top of puzzles that almost never repeated themselves.  That variety in the puzzle designs kept me engaged and every time I solved a puzzle, just to be given an item I knew was needed on another one, I found myself having a hard time putting down the controller.  With that said, it’s not perfect and I found myself stumped at a few points in the game and not because of the puzzle’s challenges, which I enjoyed.  When I was stuck, it was mostly due to not being aware of something I could interact with.  In one of the stages I could not figure out what to do.  I had explored every option, tried to use every item in my inventory at every puzzle station to no avail and was just left confused and frustrated.  Thanks to that hint option, it was revealed to me that there was a bar I could grab that allowed me to manipulate a puzzle in a new way that let me to solve it quite easily.  In fact, whenever I used that hint option, on almost every occasion but one out of the 4 or 5 times I used it, the game told me to interact with something I didn’t realize I could.  With that said, as much as that frustrated me, that hint option is there so should you be lost in this game, odds are that one little clue will allow you to move forward making my one major issue much less offensive in the grand scheme of things.  You also have to read fair bit of notes and while the text is large enough to read relatively easy, I wouldn’t have minded if these were narrated as substantial reading in VR gets old. 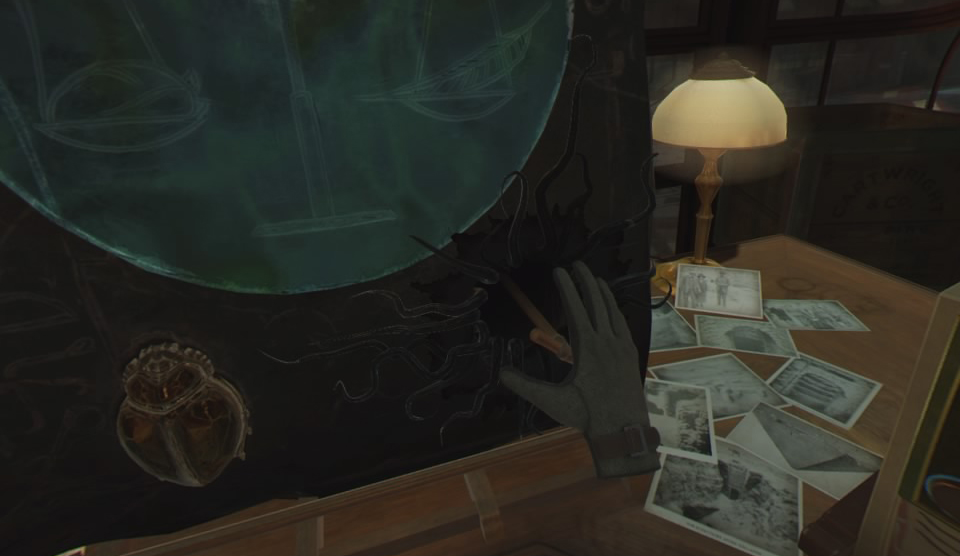 The Room should take most folks somewhere in the 4-hour mark to beat giving this game some decent legs.  There is no reason to revisit the campaign a second time, but as far as VR puzzlers go, I found The Room to be one of the more refined ones I have ever played.  It’s not perfect by any stretch, but for those who enjoyed games like 18 Floors or I Expect You to Die, The Room lands somewhere in the middle of those 2 and is an excellent addition to the genre.

What would I pay? I am admittedly a puzzle fanatic so I might enjoy this genre a little more then the average player.  The story hooked me and I really enjoyed the way the puzzles were presented as well as the quality in presentation and because of that, I’m cool with the $30 asking price.

Fireproof Games provided The VR Grid with a press code for this title and, regardless of this review, we thank them for that!