It’s time to get your hack-and-slash on in this classic style arcade brawler with a VR twist.  If you are familiar with the old-school beat-em ups like the Simpsons or X-Men arcade games from the early 90’s than you’ll have a pretty good idea what to expect from Bloody Zombies.  It’s a genre that makes little sense in VR, yet playing between both flat and VR versions showcases why VR can be a great fit for any type of game. 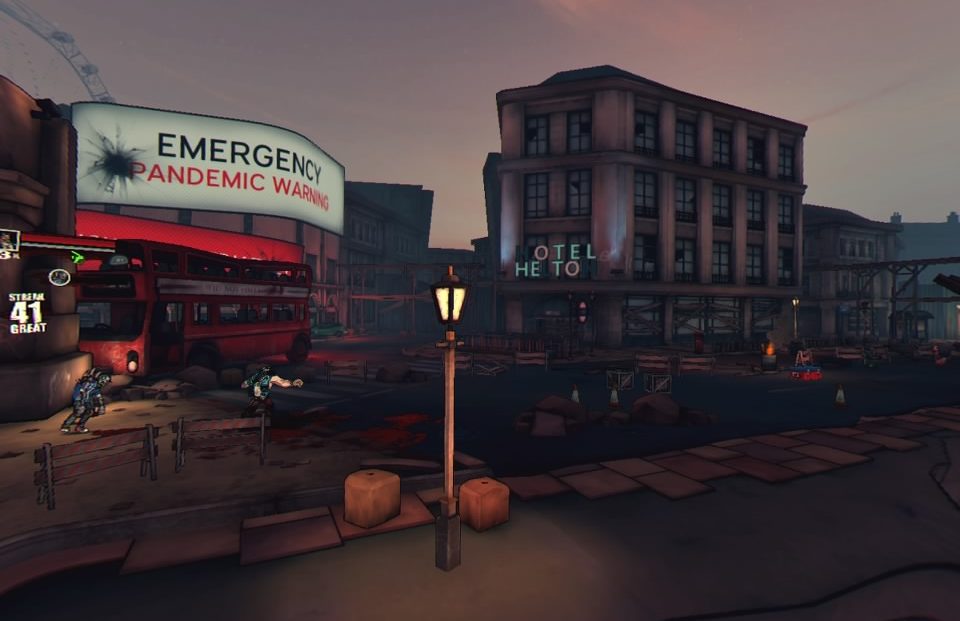 The story is a classic tale of Zombies taking over the world and it’s up to you, as 1 of 4 badass misfits, to clean up the streets and get to rescue!  This is a button mashers dream as just hammering the punch button will get you through many portions of the game.  For those looking for a little more finesse there are tonnes of combos and unlockable abilities to be used against the plethora of enemies.  Each stage is broken up by barriers that force you to stop and dispatch your undead foes before moving on to the next part and eventual stage boss.  Run, jump, kick, punch, grab a weapon, dodge an attack…every genre trope is here in almost perfect representation.

I just recently reviewed The Lost Bear and this is almost it’s visual sequel…if the sequel was a zombie infested brawler full of guts, gore and badassery…heck come to think of it, this could be the apocalyptic prequel!  The art style is all hand drawn, cartoonish and shines, being very clear and polished to near perfection. The character models are 2D while the scenery has some 3D depth that is amplified 10-fold in VR.  Non VR has you looking at the screen as you walk, limiting the view to a preset locked distance, typical of the genre.  In VR…well that’s a different story.  Your VR view is pulled back a bit allowing you a little more of a look down view on the stage, but not just the area where your survivors are.  Instead you get a full view of the level giving this an almost diorama type feel that looks really, really good.  I reviewed Gunsight for the Gear VR sometime ago and this has an almost identical feel, only with the added head tracking allowing you to lean in or pull back on the action. 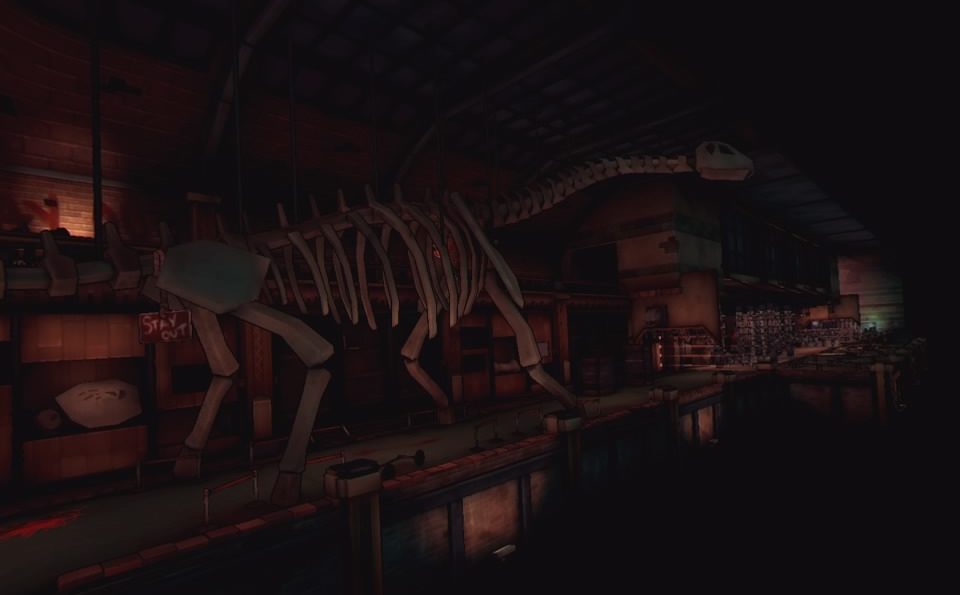 In VR, the scale of the levels is revealed to be…Jurassic in size (wait, I don’t think that makes sense.

My biggest issue with the visuals is that, while they look amazing, the VR aspect still feels underutilized.  Having explosions or gory bits fly at the screen occasionally would have added greatly to the presentation.  Heck even having something fly in between you and the play area (helicopter, bird, some embers…) would have greatly added to immersing me in the game.  Don’t get me wrong, this game looks really good in VR, especially when compared to the non-VR version, and it’s awesome to see a genre you wouldn’t expect to be in VR, look and feel like it belongs there.

Besides the 4 characters available to pick from, there are a tonne of enemy models that constantly introduce themselves through the 12 stages available. Each has their own unique ability with some even being armed with knives, grenades and a few more ‘whacky’ additions.  Throw in some boss battles featuring some of the most insane undead foes I have ever seen and you get an arcade masterpiece. This is a game that takes the source seriously (Zombie apocalypse) than adds a whole bunch of comedy tropes that lightens the mood immensely. The levels are all heavily detailed and the art style makes everything look better than it needs to be.

On the audio side, the zombies all groan, grunt and make more monstery noises that fit here wonderfully.  The standout in the audio is the banter from the your hero’s and this is only made better by playing with more people.  By yourself, you’ll spout out some one-liners and talk to yourself when the next barrier shows up.  With multiple people playing however they sprak back and forth about the goings-on around them. Additionally, the soundtrack is great with lighter tracks mixed in with some heavier, slightly electronic beats that feel like they belong in an epic movie and not just some budget VR title. 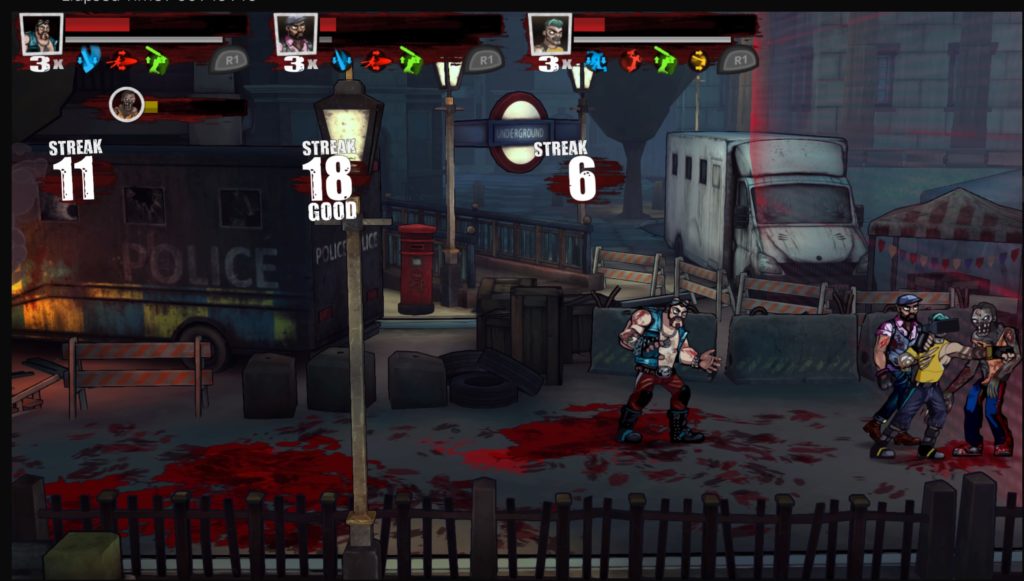 Beating up on the undead with friends is always a joyous occasion!

As I said the gameplay is classic arcade beat-em up action.  Enemies, containers and hidden areas contain temporary weapons, health and other bonuses needed to extend your gameplay.  Money collected through the slaughtering of the undead can be spent at a store that occasionally pops up during the campaign, offering rarer abilities, combos and items.  The number of enemies here is staggering with so many being introduced that it almost becomes a chess match trying to kill them while avoiding their specific attacks.  The action here is perhaps one of the most impressive call backs to side scrolling action titles of old, yet feels fresh and modern.

While this can be played in single player…multiplayer is the core of this game.  The nature of the genre is repetition and when playing by yourself, it just gets old…and difficult.  Even with the variety of enemy types, after 3 or 4 mission, I just needed a break.  Playing with friends on the other hand extends the gameplay immensely.  Locally, the man with the VR headset gets a birds eye view of sorts, aiding in finding those secret stashes.  Online, up to 4 players can get together, with either method minimizing the difficulty and maximizing the fun.  Rescuing your partners from a dire situation is just as rewarding as giving up one of your lives to bring them back into the fight after an untimely death.  By design this is better with friends and should be played so. 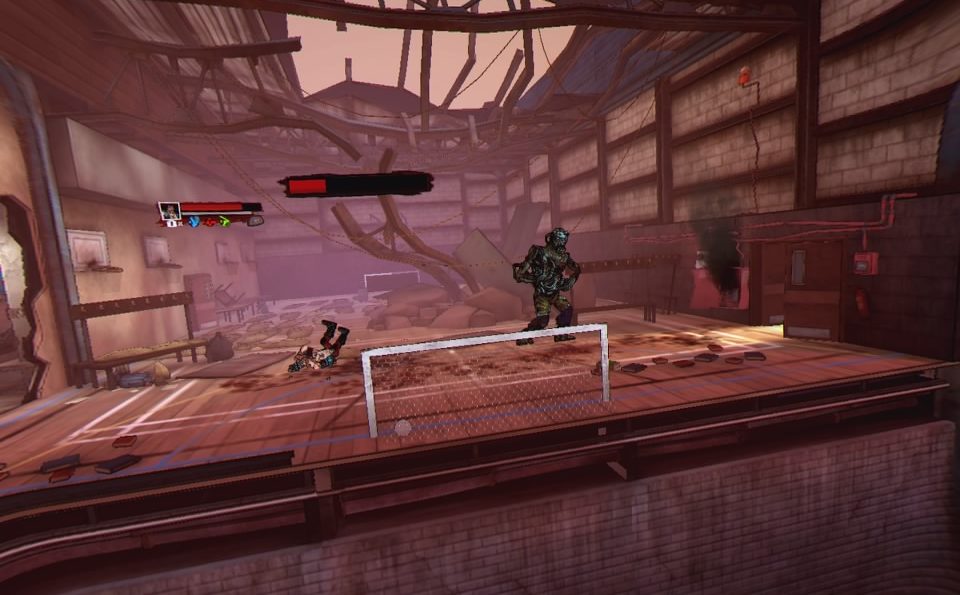 This is some great fun in VR and the only thing hurting this game is the genre itself. It can be difficult and frustrating at times, but that is by design.  Get better, learn those combos and abilities and learn how each enemy attacks; these are the keys to victory.  Going at it alone is its own challenge, and I can’t say enough just how much the game plays better with friends.  Not to mention that the campaign is actually very lengthy and conquering all the stages (even on easy) is going to take you 2 to 3 hours, and probably even more than that when you factor in dying and restarting once or twice(or more).  As far as side-scrolling beat em-ups go, it’s hard to get better than this.

What would I pay? $14.99US is a steal and game like this, back in my younger days, would have sucked up a tonne more quarters than that.

nDreams provided theVRgrid.com with a review code for this game and, regardless of this review, we thank them for that.