Skyworld is a fantasy-themed, turn-based, strategy-board-game. While a literal board game might sound boring, these themes blend seamlessly into VR for a magical, unforgettable experience. While player choice is limited at times, this title lays the groundwork for a groundbreaking new genre of VR strategy. With an interactive environment that engages the player at every step, Skyworld is the stuff of every strategy fan’s wildest dreams.

Skyworld places the player atop one of many platforms floating in the sky. In this relaxing environment, you’re presented with a large table containing a 3D board game in one of several maps. The entire world feels interactive (you can knock around items with your hands) and is fully animated. This is a special feature for the board game genre: Looking down, in VR, at your board and seeing a living, breathing world is a remarkable experience. 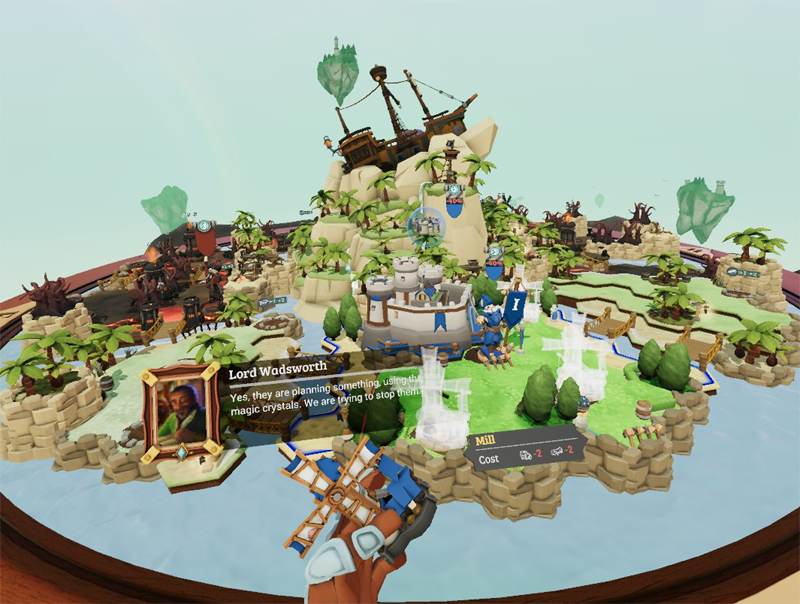 Beginning at your castle, the player starts out by hiring a general. You must move the general across the board, exploring new areas and conquering enemy territories, with a limited number of spaces per turn. In order to expand, the player is tasked with constructing various buildings. Hiring citizens to work for them, you must maintain production of six different resources that can be used to construct more buildings or grow your territory. While you can place buildings wherever you want, some plots of land yield higher resource production in specific categories. This builds pressure to strategically take over regions which would yield a safer accumulation of certain resources. Buildings themselves require stone, wood, and gold. Deciding which ones to build first is also a difficult and strategic decision on the part of the player.

At a whim, the player can summon tablets which display all the executive choices you need. One panel lets you build and destroy buildings, and place workers at them. Another lets you customize your active deck of cards. One panel displays all your resources, and indicates their growth or decay rates.  On the “control” panel tablet, you can pull a lever which sends you to other locations. The entire board flips over, powered by a steampunk-style contraption, to your other rooms. Although this is a subtle design choice that has no effect on gameplay, going to other locations makes the game feel like a pop-up book. This is an excellent theme that fits right into Skyworld.

One such location is the throne room, where you can adjust your taxes and food rationing. These affect the happiness of your citizens, which is crucial for maintaining your population and, subsequently, the resources they produce.  In another room, you can use magic and iron to purchase new cards to expand your army. Cards, which each feature an adorably animated character, fill different roles. Outfitting your deck with the proper assortment requires strategic planning that works well in the game. The last room is a blacksmith, where you can upgrade your cards. 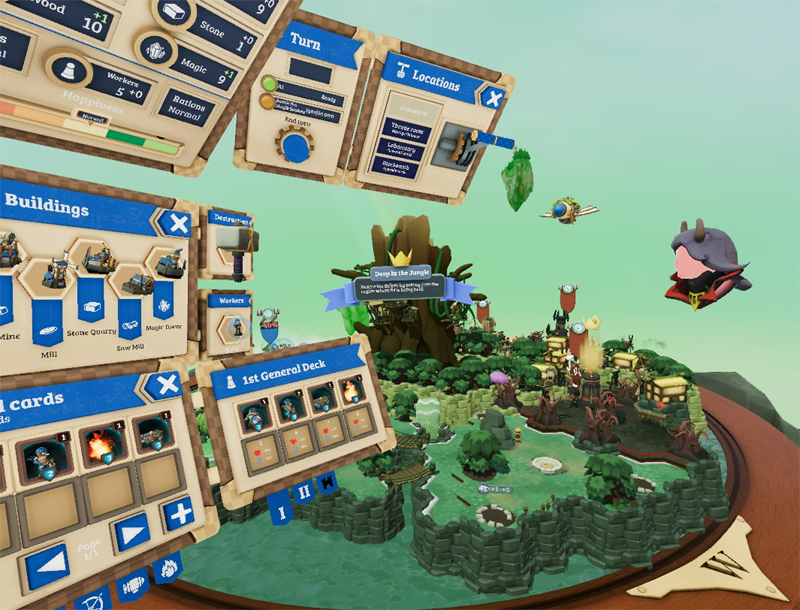 Mentioning cards leads me to Skyworld’s battle system, its most exciting and unique feature. When your general engages in battle with either an enemy general or their castle, the board flips to a flat terrain of whatever environment the battle occurs in. Here, you face off with the opponent in real-time-strategy, seeking to destroy their castle and its two towers while defending yours.   In one hand, you carry a spread of four cards, randomly selected from your eight-card deck. With your other, you can pull out cards and cast them onto the battlefield. These cards come to life as fully-animated soldiers that run across the battlefield, brawling with enemy soldiers in a way that suits their combat role. Some soldiers fight with melee weapons like swords, while others use ranged weapons like bows or sniper rifles. Some cards contain battalions of spongy troops, while others cast a single tank or boss-battle onto the field. You can even summon airships, like blimps. Each card requires a certain amount of mana, which slowly regenerates.

Some cards are spells, which you can blast directly from your hand onto the enemies below. Despite being a strategy game, being able to blast away enemies (from the sky) is an extremely unique feature that makes combat visceral and satisfying. Watching your massive army fight to the death, spawning them via cards in your hand, is a fun system that strongly resembles the fighting in “YuGiOh.”

This system of combat is also highly simplified. Whereas most strategy games require lengthy introductions and have a steep learning curve, Skyworld is extremely easy to pick up and play. These combat sequences synchronize well with the overarching board-game style of gameplay, even though it feels like a complete genre-switch. The change in pace with combat sequences keeps the game fresh and unique, and prevented me from ever feeling bored.  The only problem here is the number of cards you’re able to unlock. While there are many, you’ll get used to them very quickly. Cards have a huge variety, but many cost more mana than can be afforded at a given moment. While saving up mana for a tank is exciting, you’ll mostly be sending out low-level cards which you’ve already seen countless times. The baseline combat mechanics in Skyworld are nothing short of groundbreaking, but it missed an opportunity for a much wider arsenal of cards to unlock. 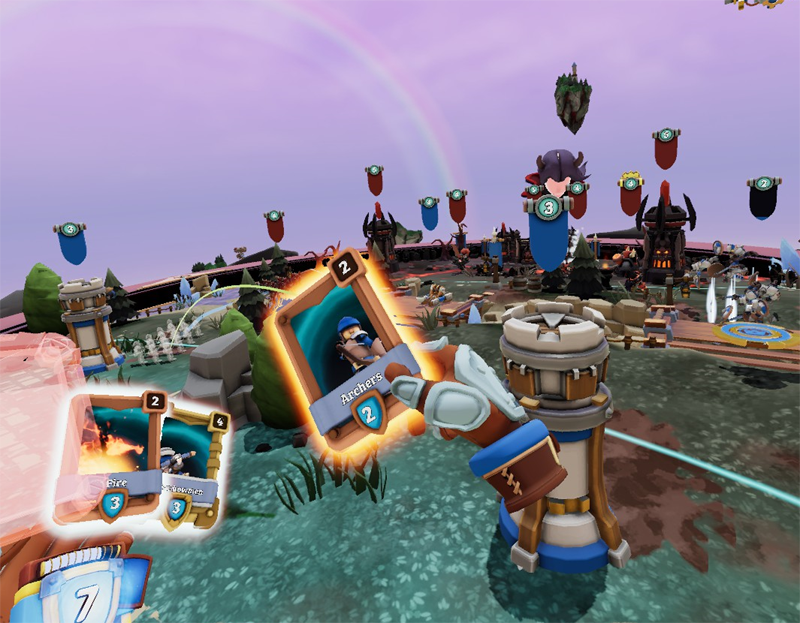 Tossing cards is the easiest, and most fun, troop-deployment mechanic I’ve ever experienced

Skyworld’s story is nothing special, but tells a fairly complete one. Demons are attacking the Skyworld, conquering many worlds. You must retaliate, banishing them back to their realm. This narrative is filled with cliches, but contains a solid structure with quality characters and a nicely wrapped-up ending. While this isn’t a unique story, it’s a satisfying, fully-developed one.  The story is split into eight levels, beating which took me at least an hour each. This led to 10 hours of gameplay before I’d beaten it, which is exceptional for a VR game. “Skirmish” mode also offers several unique maps, playable as independent missions outside of the story. While skirmish is very similar to the base game, it adds replay value and gave me a couple more hours of gameplay.

The issue with this length is that playing Skyworld requires a ton of patience. While the experience hooks my attention better than most strategy games ever have, each level takes a time commitment of nearly an hour, if not more. My attention span is very short, and I often got tired of playing before finishing a single level. However, this “issue” is common in nearly every strategy game since the dawn of the genre. I rarely play strategy games because of this, and Skyworld had me less bored than many others. If you play strategy games, and have the patience for them, then this isn’t even an issue for you. If you’re like me, however, it might be worth noting.

Skyworld has a multiplayer mode, which can be extremely fun and competitive- if you find anyone to play with. As a 1v1, turn-based board game, finding a player requires you wait in a lobby until someone hopefully joins. Unless you coordinate with friends, this renders it nearly impossible to find an opponent. Luckily, the AI in Skyworld makes up for this by being clever and challenging. It would be nice to play multiplayer with someone, but you’re not missing out on too much without it.

One of Skyworld’s best assets is its quality. In addition to excellent graphics and immersive visuals, the game is extremely polished and has an incredible attention to detail. Everything feels lively and animated to perfection. The user interface is what you’d expect from a AAA title, containing all the options you need and simplified controls. You can spin the table and move it closer to you, allowing you to view the board from any perspective. The resource and building panels I mentioned earlier are also streamlined and easy to access, removing a lot of the frantic confusion that (in my opinion) makes many strategy games so difficult. 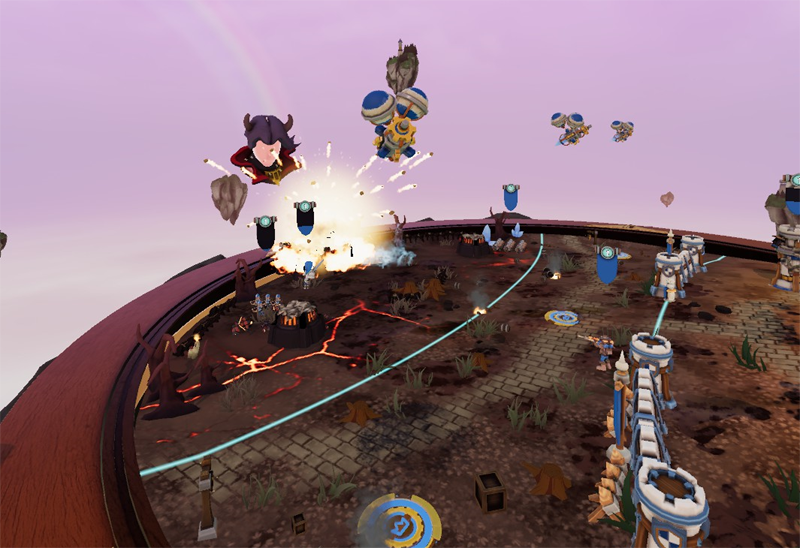 Skyworld is also relatively bug-free, with one glaring exception: when you lose a mission and choose to restart, the controllers often stop working unless you restart the game. While this was incredibly annoying at first, this is the only bug which interfered with the game in any way. Compared to most VR games, bumps in the experience are extremely rare here. Overall, this is one of the most well-polished games I’ve played in VR.

But what would I pay for it?   Skyworld is an immersive and engaging VR strategy experience that merges genres and defies them as well. While it gave a solid 10 hours of gameplay,  Skyworld’s hefty $40 price left me expecting more. I personally wouldn’t pay more than $30 for Skyworld, but it’s unlike anything else, and still undoubtedly worth buying at full price for fans of strategy games.

Vertigo Games provided The VR Grid with a review code for this game and, regardless of this review, we thank them for that!